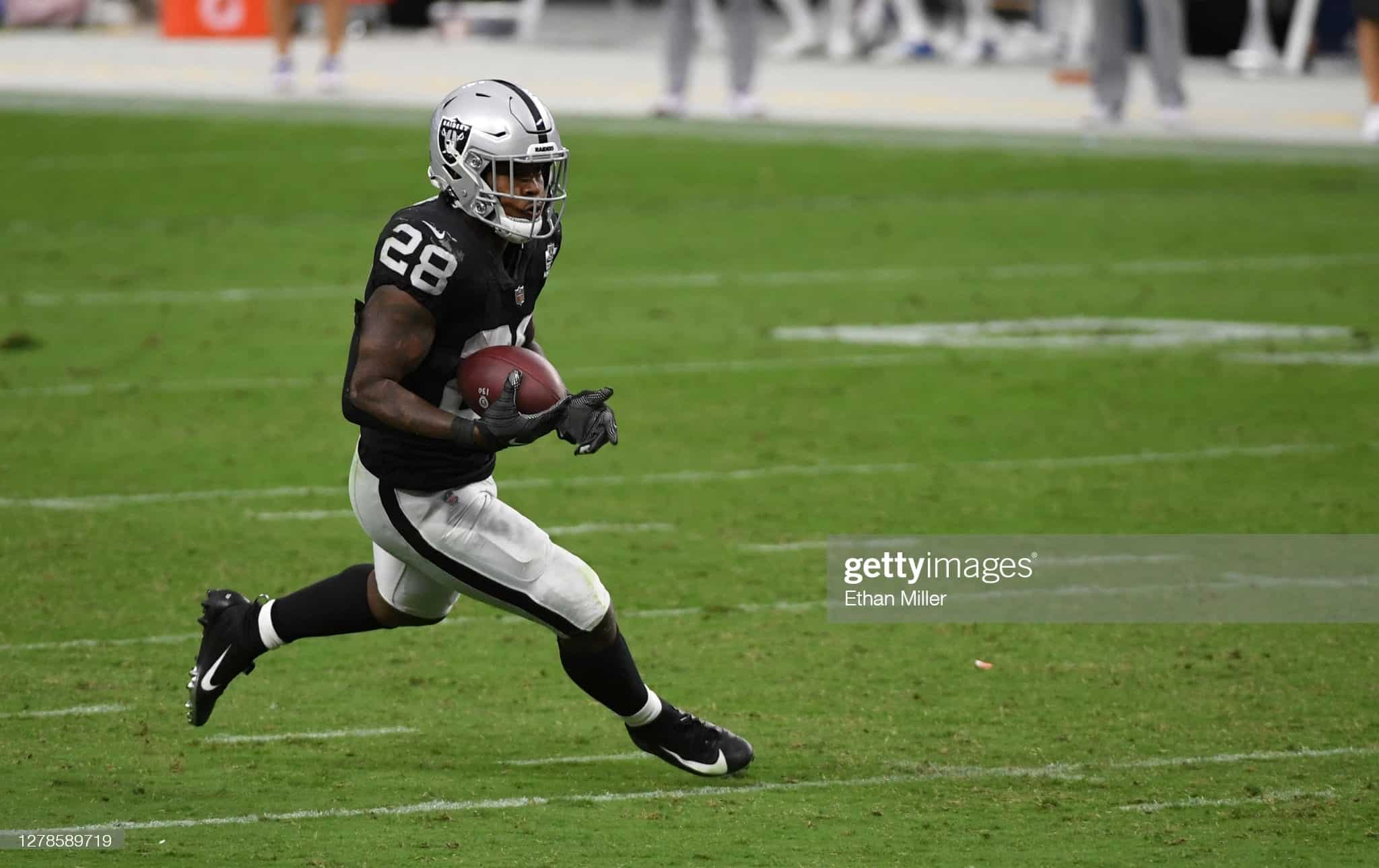 The Top 50 Series profiles individuals currently occupying a spot in the top-50 2021 Startup Dynasty ADP over on DLF. In Dynasty, there are certain players that tend to hold more uncertainty or are more divisive than others. The Top 50 Series takes a deep dive into the player’s career performance to date as well as his dynasty outlook for 2021 and beyond. The Top 50 Series continues with the profile of Las Vegas Raiders’ RB Josh Jacobs.

Alabama RB Josh Jacobs was selected by the Oakland Raiders with the 24th overall selection of the 2019 NFL Draft. With the pick, the Raiders made Jacobs the 1st running back selected and the only RB to be selected within the first round.

Jacobs spent three seasons at Alabama. In those three seasons with the Crimson Tide, Jacobs appeared in 40 games totaling 1,491 yards on 251 carries, and he scored 16 touchdowns. In addition to his work on the ground, Jacobs hauled in 48 passes for another 571 yards and 5 scores. His best season came in 2018, posting 887 scrimmage yards on 140 touches and scoring 14 touchdowns.

Josh Jacobs had a solid season as a rookie for Las Vegas. He carried the ball 242 times for 1,150 yards and scored 7 times. He added another 166 yards on his 20 receptions. He finished his first season as RB21 with 191.6 PPR points in 13 games played. Through the first 13 weeks (12 games), Jacobs sat as RB12. He finished his inaugural season 8th in total rushing yards, and his 85.1 yards per game ranked third behind only Derrick Henry and Nick Chubb.

His second season in Las Vegas saw his rushing yards decrease, his receiving role increase, and he experienced positive regression in the touchdown department. In 2020, Jacobs appeared in 15 games and totaled 1,065 yards rushing, 238 yards receiving, and he scored a total of 12 touchdowns on a career high 306 touches. Jacobs completed his sophomore season as RB8 with 231.3 PPR points.

Normally we would be pretty jazzed about a 23 year old running back who was RB21 as a rookie and RB8 the following season. Then the Raiders went and signed free agent RB Kenyan Drake. Despite the fact that Jacobs displayed the ability to catch the football out of the backfield in college and has 53 career receptions in the NFL, Jon Gruden for the most part has refused to commit to Jacobs in the passing game.

In Jacobs rookie season, Jalen Richard and DeAndre Washington combined for 84 targets, 72 catches and 615 receiving yards, compared to 27/20/166 from Jacobs. In Vegas in 2020, Richard and Devontae Booker combined for 44 targets, 36 catches and 222 yards, compared to 45/33/238. As we enter 2021, the addition of Drake has the potential to cap Jacobs’ receiving work and impact his work in the running game as well. In addition to Drake’s arrival was the Raiders’ decision to revamp the offensive line, making it worse in the process. No matter how you look at Jacobs’ 2021 season, it adds up to a reduced role and certain regression.

Drake inked a 2-year, $11 million dollar deal this offseason with $8.5 guaranteed. His impact on Jacobs’ fantasy value should be felt into 2022 as well. Josh Jacobs is certainly a startable fantasy running back, but he simply isn’t as good as his overall numbers indicate. He finished 14th among RBs in PPR points per game at 14.3 in 2020, but actually scored at least that many points just five times in 15 games. Jacobs, not unlike other backs, needs consistent volume to be effective, and with Drake hanging around the volume almost certainty decreases.

Standard league scoring Josh Jacobs fantasy managers should not be as concerned about Jacobs and his future value. He was more consistent in non-PPR formats, which shouldn’t be that surprising considering he averaged 2.2 catches a game in 2020. Simply put, Jacobs still holds value. In PPR scoring leagues he holds value as well, just not the top-12 value he held a year ago.

I currently have him ranked 43rd, and he is my 20th ranked RB in my 1QB start-up PPR rankings. The RotoHeat consensus rankings have Montgomery ranked in-line with my ranking at 43rd overall.

The DLF ADP of 37th is slightly high in my opinion. The limited involvement in the passing game hurts his fantasy value. If your name isn’t Derrick Henry, then you need the receiving game numbers to be considered a top-12 RB. The added uncertainty in the run game is baked into my ranking of 43rd.

If you have yet to complete your rookie draft and are looking to sell Josh Jacobs for some draft picks, I would be setting the price at first round selection in the 1.04-1.06 range. Jacobs is still a RB, and that in itself elevates his value. Although I wouldn’t pay that price for Josh Jacobs, his ADP indicates that he is worth that mid-first round selection.