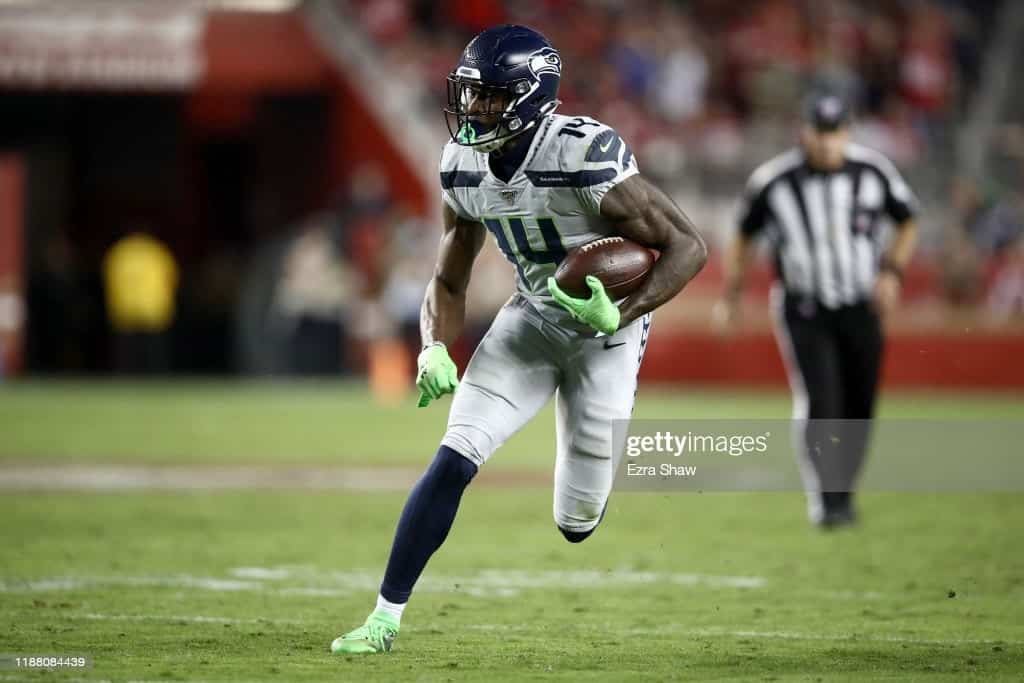 The Top 50 Series continues with the profile of Seattle Seahawks’ WR DK Metcalf.

Ole Miss WR DK Metcalf was selected by the Seattle Seahawks in the second round (64th overall) in the 2019 NFL Draft. With the pick, the Seahawks made Metcalf the 6th wide receiver selected in the draft. Metcalf slid down the draft board to the surprise of many, myself included. The slide could have been due to his neck injury that shortened his final season at Ole Miss, or perhaps it was his performance in the 3-cone (7.38 second) and short-shuttle (4.5 seconds) at the combine.

Metcalf spent three seasons at Ole Miss, and in his 21 games with the Rebels totaled 1,228 yards and scored 16 touchdowns on his 67 receptions. As a freshman at Ole Miss in 2016, Metcalf appeared in the first two games of the season before suffering a foot injury which ended his season. His best season came in 2017, a season in which he caught 39 passes for 646 yards and 7 touchdowns in 12 games. In his final season at Ole Miss, Metcalf had 26 receptions for 569 yards before sustaining a season-ending neck injury.

DK had a very productive rookie season. He appeared in all 16 games for the Seahawks and totaled 58 receptions for 900 yards and scored 7 touchdowns on 100 targets. DK was quite consistent week to week in 2019. He saw double digit targets only twice–Week 10 (10) and Week 17 (12). His season high in receptions was 6 (which he did on 5 occasions), and he only went over 100 receiving yards in one game. He averaged 11.7 PPR points a game and finished his inaugural NFL season as WR33 with 187.1 PPR points. His WR33 finish was second best among rookie WRs. His former Ole Miss teammate, A.J. Brown, was tops with 217.1 points (WR21).

2020 was a tale of two seasons for Metcalf and the Seattle offense in general. After Week 9 (eight games), DK sat third in fantasy scoring averaging 21 PPR points a game. Through the same 9 weeks, Seahawks QB Russell Wilson sat at QB3 averaging 29.6 points per game. In the second half of the season, however, Seattle’s offense did a complete 180. They stopped letting Russ cook and ran the ball into the ground. As a result, DK was WR23 from Week 10 through the end of the season. At the same time, Wilson dipped to QB12.

Metcalf and Wilson are far too talented to fade away like this. I don’t put the dip in production on the players–I put it on the organization. There was talk early in the offseason that the Seahawks want to run the ball more in 2021. Hopefully Russell Wilson’s public unhappiness has changed that thought process. We Need Russ to cook so DK can eat, plain and simple.

DK Metcalf emerged as one of the top wide receivers in fantasy football in 2020, finishing as WR7 overall during his breakout season. His 1,303 receiving yards ranked seventh in the league and he finished with 10 touchdown receptions. No other WR in the league is able to match Metcalf’s size and speed. In addition to his yardage and touchdowns, Metcalf ranked second in the league in air yards and third in deep targets last season.

All of those stats are extremely mouth-watering for DK Metcalf managers. Now imagine an offense that lets Russell Wilson be Russell Wilson for all 17 games in 2021. In that scenario, Metcalf possesses WR1 overall upside.

Post 2021, the value for DK remains, and quite possibly increases. He will only be 24 years old entering the 2022 season and he will be in the final year of his rookie contract. As long as Russell Wilson remains in Seattle, Metcalf, barring injury, should remain a top-5 dynasty WR.

I currently have DK Metcalf ranked ranked 7th, and he is my 2nd ranked WR in my 1QB start-up PPR rankings. The RotoHeat consensus rankings has Metcalf four spots lower at 11. Both the DLF ADP of 9 and the rank of WR4 are in line with my rankings. I tend to value the WR higher than the consensus.

Trading for DK Metcalf prior to the 2021 season is an expensive venture. His value is at its peak and his current value doesn’t offer much in the terms of a positive return on investment. DK either balls out or he doesn’t. If he does you got what you likely paid for and if he doesn’t, then you have a fantasy asset you likely massively overpaid for.

Acquiring DK will likely cost an early first rounder plus. The plus is likely going to be another first of a high level established asset. As high as I am on DK, I would caution those on trying to buy.