Oh the NFL Combine; the week where we all sit around and act like GMs, watching the best athletes workout in spandex. Just to save face, I would be tuned in if they were wearing sweatpants and sweatshirts. As you watch the combine, the wide receiver combine especially, you will get a media perspective as to what they think is important. And if Henry Ruggs runs a sub 4.2 forty yard dash, it will consume all the major sports news feeds. I am here to help you weed through all those upcoming headlines and figure out what is important per the role of the receiver being tested.

It is important to realize that with the receivers in particular there are important drills for some and not for others. This is because there are distinctly different types of receivers. It is important to understand the different receiver positions and what we expect to see at the combine. In fact, we can refer to this as the “DK Metcalf or Cooper Kupp Rule” as they performed great at the drills that fit their skill set, and performed poorly on those that didn’t.

Slot receivers are smaller bodied players that are more flexible and shifty. They tend to separate well and possess good footwork. The location of where the slot receiver lines up on the field allows him to have a two-way-go when running routes–meaning they can release inside or outside. The drills that are important for a slot receiver are the 3-cone drill, the 20 yard shuttle, and the first 10 yard split of the 40 yard dash. These drills focus on burst, acceleration, lateral quickness, and accelerating while changing direction.

A receiver can run a slow overall 40 yard dash, but might possess the athletic ability to excel at his role in the position. Thus, the “Cooper Kupp Rule”. His forty time, 4.62 seconds, is far slower than the average fantasy WR1 (4.49 seconds), but his 20 yard shuttle of 4.08 paced him 5th best for his class, and cone time of 6.75 seconds placed him at 9th best of his class. Kupp may not be the fastest player on the field, but he is definitely one of the quickest.

The “X” receiver: Also known as the split end and plays on the line of scrimmage. X receivers need to have the burst and strength to fend off jam-coverage. They usually have less ability to shake defenders in space as they normally can not release to the outside on many routes because they are lined up on the outside. They also need to have the strength to run routes over the middle of the field and get yards after the catch.

X receivers are usually taller, stronger receivers that have less flexibility but more explosiveness. The drills that an X receiver should excel at are the vertical and broad jump. They should also put up adequate reps on the bench press and run 40 yard dash in the upper 4.4’s to low 4.5’s They should do the above while standing around 6’3 and 220 pounds.

The “Z” receiver: Also known as the flanker, the Z receiver usually plays on the same side as the TE, opposite of the split end and lines up off the line of scrimmage. This allows the receiver to use quickness instead of strength to fend off jam-coverage. Z receivers run most of their routes outside the numbers going more vertically down the field. They should possess great speed but don’t need to be the physical specimen that an X receiver is. They also don’t have to be nearly as shifty as a slot receiver since their route tree has a lot less branches. The drills that a Y receiver should excel at are the 40 yard dash, vertical and broad jump.

An outside receiver (X and Z) should do well in the 40, vertical and broad jump, but may do poorly in the cone drills and short shuttle. Thus, the “D.K. Metcalf Rule”. Metcalf dominated the 40 yard dash, vertical jump, broad jump, and bench–finishing top 5 in his class in all 4 drills listed above, but his cone drill and 20 yard shuttle were something to laugh at. Metcalf may be the fastest player on the field, just don’t ask him to run a Flat-1(3 step outside breaking route).

*Note: Teams do move receivers all over the field, so most receivers should be able to play both outside roles and in the slot. Thus, all drills are relevant but not to the extent some perceive. If I were a GM, I would love to have an athlete like Julio Jones that can run a route from anywhere on the field, but I am also not going to drop D.K. Metcalf from my draft board because he can’t run a fast short shuttle. Remember, there are reasons why N’Keal Harry didn’t run the short shuttle or 3-cone.

Now that we have a great understanding of what drills are important for each type of receiver, it is important to remember that our evaluations should not start at the combine. If you do that, you will get deluded by those headlines and draft the fastest overall player too high.

You need to watch the combine with film in the back of your mind, thinking about what you saw on that players tape so you know what you’re looking for at the combine. For example, I love the film on Michael Pittman Jr. He is a 6’4” 220 pound outside receiver who high points the ball and catches well with his hands while using his body to fight off defenders. If he runs a high 4.4 or low 4.5 and has a good vertical, he is going to move up my draft board.

Realize the combine isn’t everything, it is just a piece of the puzzle–a small piece at that. However, it is an event that brings buzz and news, and one that brings your fellow league mates back to football after the long hiatus post-Super Bowl. Make sure you don’t get trapped by the headlines and watch with all the players film playing in the back of your mind. A great resource to use in parallel with the combine is the RotoHeat Rookie Evaluations on YouTube. I highly encourage you to cross reference what you see at the combine with what the team has broken down for you on tape. This will lead to success in your rookie drafts. 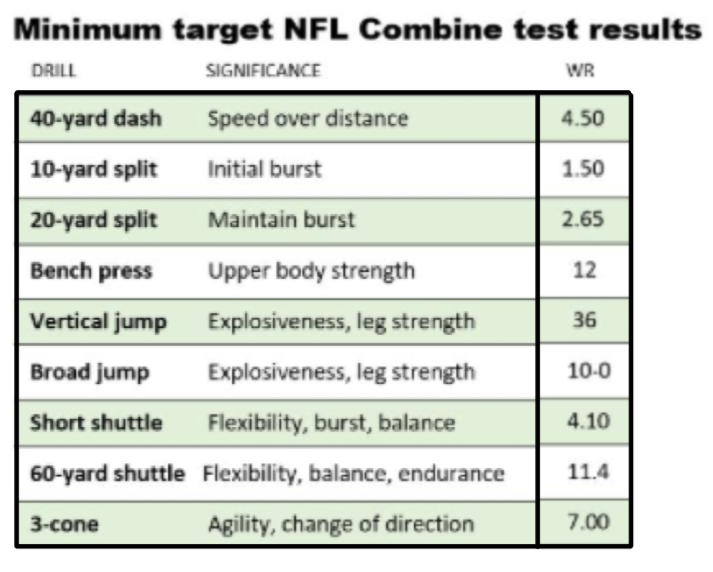 Some Final Tidbits of Information:

-In the last five years, no overall top performer in the 40 yard dash, Vertical Jump, or Broad jump has finished as a WR1 in their career.

-In the last 10 years, only one WR that finished as a WR1 in their career, Brandin Cooks, had the fastest 40 yard dash of his class, and two receivers, Emanuel Sanders and Julio Jones, had the longest broad jump of their class.

-In the last ten years, the athlete with the highest vertical has never finished as a fantasy football WR1.

-Broncos are not sending any assistant coaches to the combine (They believe their personal can use their time more wisely at home scouting).

-Times and scores are getting better every year because athletes are preparing better for the combine. It is hard to compare this years numbers to athletes 5 years ago.