Home Uncategorized 140 – Why You Should Sell Derrick Henry in 2021 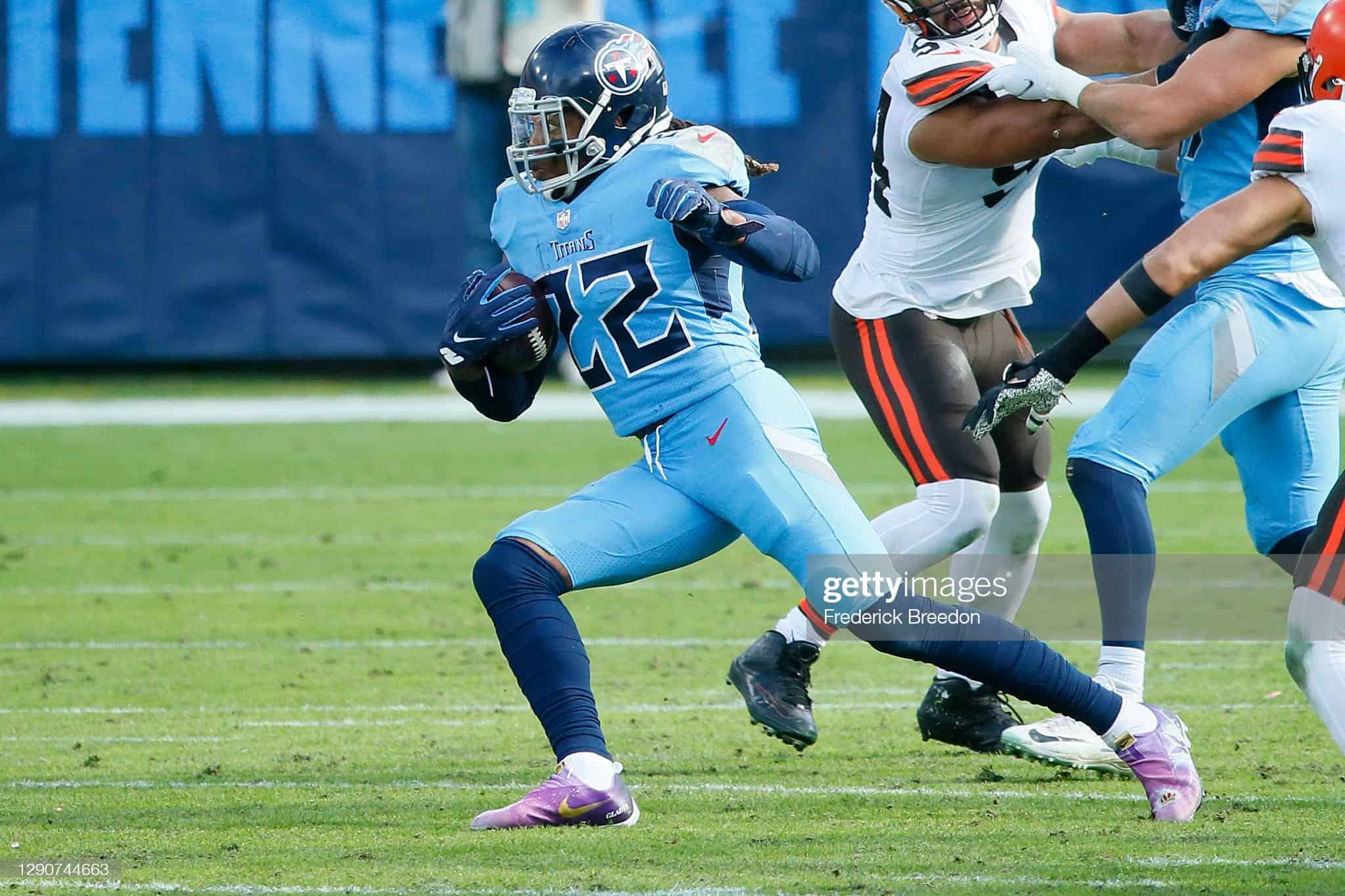 During the 2020 NFL season, Tennessee Titans running back Derrick Henry rushed for a total of 2,027 yards. In the process, Henry become the eighth RB in NFL history to eclipse 2,000 yards in a single season. Henry’s performance clearly benefited those that managed a roster with him on it in 2020. Henry finished his 2020 campaign with a career high finish in points with 331.3 and placement as the RB3. In a season when many (myself included) called for regression, Henry improved on his 2019 performance of 294.6 PPR points and a RB5 finish.

The 2,000-yard rushing accomplishment is certainly significant, after all, in the leagues 101 year history only eight have done it. One of the most difficult decisions a dynasty manager can make is when to move on from a high performing asset. Don’t believe me, just ask all those that still have Todd Gurley and Le’Veon Bell cluttering up their rosters. When looking at the asset that Henry is and trying to determine what to do with him, it led me to ponder what became of the seven previous members of the 2,000-yard club. Utilizing statistics courteously of Pro Football Reference, I took a deeper look into this exclusive club with the intent of finding a trend. The trend I discovered is the reasoning behind why you should sell Derrick Henry in 2021.

Clearly 1984 turned out to be his best season; after all, he set the league rushing total.  What is interesting is the decline after the 1984 season.  In 1985, his carries dropped by 87, his yards by 871, his YPC by 1.4, and his touchdowns by 2.  His receiving game stayed near his previous season and his total touches and yards as a result dropped by 88 and 884.

In 2012, 28 years after Eric Dickerson set the single season rushing record, Minnesota Vikings’ running back Adrian Peterson finished 82 yards shy of the record with 2,097. In addition to having his best rushing season, AP also had his second-best receiving season in terms of catches.  He added 40 receptions on 51 targets for 217 yards.  His 2012 MVP season concluded with 388 touches for 2,314 total yards and 13 touchdowns.

AP is still active and currently trying to latch on with his sixth team in order to extend his career.  His high producing seasons are a distant memory at this stage of his career, and his 6.0 YPC in his 2,000+ rushing season is the best of his career to date.

Peterson finished his 2,000-yard season as the top scoring RB in fantasy with 347.4 PPR points. The following season, AP fell to RB11 scoring 232.7 PPR points. His 2014 season was lost to injury, and he bounced back in 2015 finishing as the RB2 with 260.7 points. 2017 was a lost season due to suspension and Peterson has never been a high performing fantasy back since. Selling him prior to 2013 when he was still only 28 years old was the peak in which you were going to maximize your return.

His production fell off a cliff after that monumental season.  Lewis never got close to the 5.3 YPC he posted in 2003 again. He finished his 2,000 yard season as RB5 with 325.1 PPR points. In 2004, he regressed all the way back to RB27 with 164.2 points. Lewis posted three more 1,000-yard seasons in 2006-2008. His highest fantasy finishes in those three seasons were RB21, RB6, and RB30. Holding Lewis after his 2,000-yard season would have seen you carry a flex-worthy running back when you could have sold him for a starter plus at his peak.

Oh Henry! Why The Best Idea is to Sell Derrick in 2021

In what surprisingly turned out to be his final season in the NFL, Sanders saw his rushing total dip to 1,491 yards and his receiving work dip to 289; he also scored 10 less times.  While 1,780 total yards is still an impressive season, the reality is that it’s a 34% decrease in total yardage. Sanders’ YPC were a career high 6.1 in 1997–the only season in which he exceeded 6 yards per carry.  His 4.3 YPC in 1998 was his worst in his career.

Barry Sanders finished the 1997 fantasy season as RB1 with 348.8 PPR points. In his final season of 1998, Sanders regressed to RB11, scoring 235 points. Clearly with Sanders retiring in his prime, your ultimate time to unload this extremely talented asset was after his monumental 1997 campaign.

Davis was rolling entering the 1999 season. In his previous four seasons combined he ran for 6,413 yards, averaging 1,603 per season and his lowest total was 1,117 in his rookie season.  Unfortunately for Davis, the Denver Broncos, and his fantasy managers, Davis hit a wall after his 2,000-yard season.

He finished the 1998 season with 381.5 PPR points and as the highest scoring RB in fantasy. One season later, Davis was the RB84. In the final three seasons of his career, Davis totaled 168.3 points in 18 total games. At the conclusion of the 1998 season, Davis was one of the most valuable fantasy assets there was. In three short seasons after, his career was over.

CJ2K is the most prolific pass catcher on this list of 2,000 yard rushers, and his pass catching proficiency remained intact for prime of his career while the rushing totals saw a significant drop.

The season following his 2,000-yard campaign, Johnson combined for 1,609 yards, and his touches declined to 360.  His totals continued their decline throughout his remaining 7 seasons.  Despite an annual decline, CJ2K remained fantasy relevant until 2014, and he finished his career in 2017.

His totals fell off dramatically the following season, as he ran for 1,125 yards and his touchdowns fell from 12 to 3. His 1975 and 1976 seasons were strong bounce back seasons before his career started to wind down, ultimately coming to an end after the 1979 season.

Derrick Henry is a beast–make no mistake about it. After questionable usage by the Tennessee Titans in his first two seasons, Henry finally took hold of the primary running back position in the later portions of the 2018 season. In the Titans first 12 games of 2018, Henry had rushed for 474 yards on 128 carries. In the final four games that season Henry ran for 587 yards on only 87 carries. Derrick Henry had arrived.

Henry continued to dominate touches in 2019 and once again in 2020. Henry joined the 2,000-yard club last season, rushing for 2,027 yards on 378 carries. His carries, yards, and touchdowns (17) were all career highs as were his 5.4 yards per carry. Derrick Henry accomplished this all in his age 26 season, and appears to be in the prime of his career.

The other seven members of this 2,000-yard club, as illustrated below, like Henry were perceived to be in the prime of their careers. With the exception of Eric Dickerson, Jamal Lewis and Chris Johnson were all age 26 or older when they recorded their career season, and with the exception of O.J. Simpson, they all eclipsed 368 total touches. We all want our fantasy backs to have volume, but too much volume can be detrimental. RotoHeat founder Rick Butts covers excessive volume and the effects here.

Surely Derrick Henry is different. This is what Henry fantasy managers want to believe. After all, nobody was predicting the decline we saw in the other backs studied for this article. Regression is real in fantasy as is positive regression. The odds of any player repeating a career season are highly unlikely. It is, after all, why they call those seasons “a career season.”

The drop off the season after the 2,000 yard season is remarkable. All members of this group saw a decline in rushing yards. The best performer, Barry Sanders, saw his total decrease by 38%. Their yards per carry all drop significantly, and their total touches, other than Sanders, all declined. 5 of the 7 backs missed time the season directly after the 2,000 yard season. Historically speaking, Derrick Henry should see his touches decline, his productivity decline, and he should miss time in 2021.

The time to sell Derrick Henry is now entering his age 27 season while he carries a startup ADP of 12.7 in PPR scoring. Henry will never be more valuable than he is today. Derrick Henry should be on contending team rosters only this season. Sell Derrick Henry in 2021 and maximize your return.