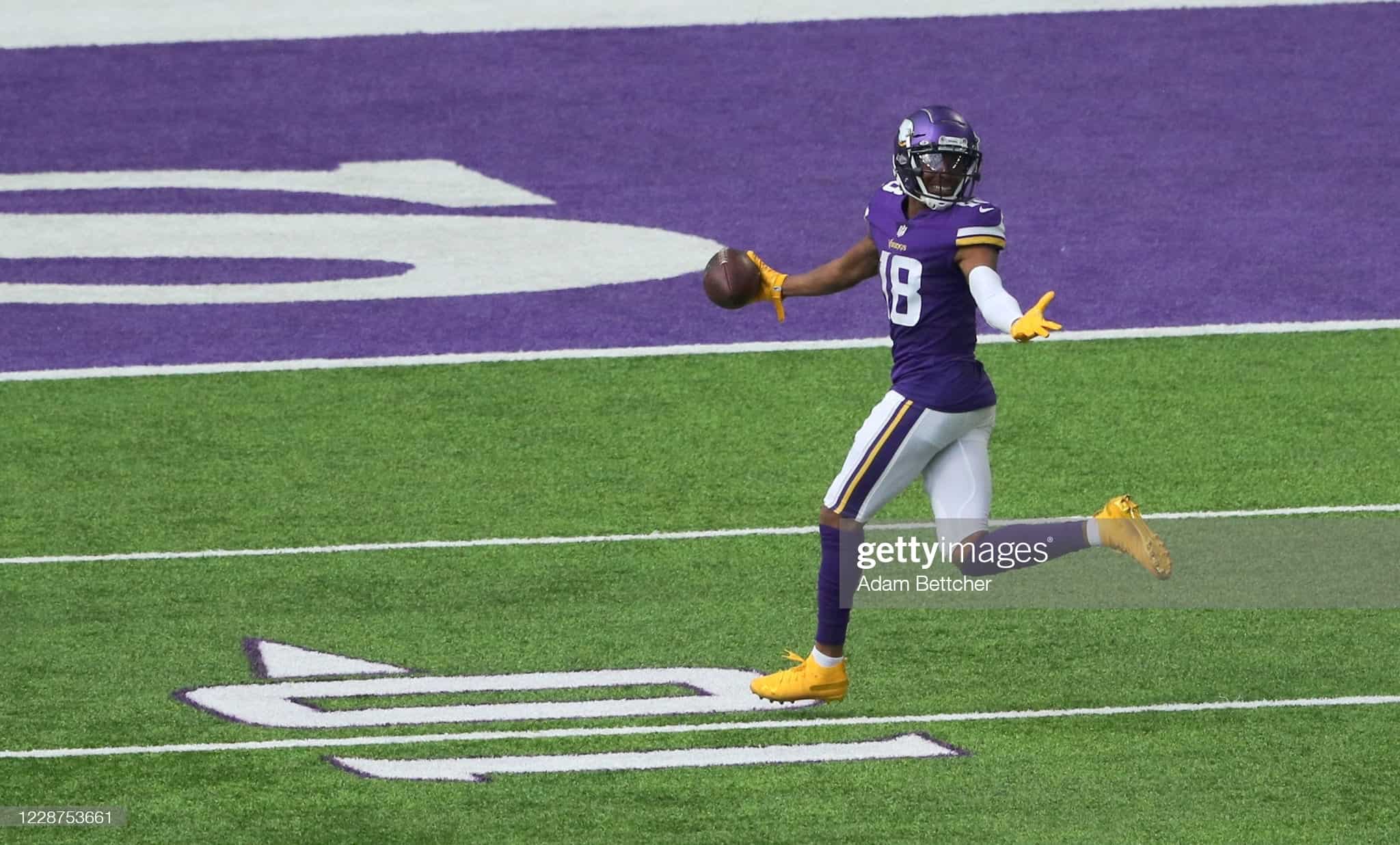 The Top 50 Series continues with the profile of Minnesota Vikings’ WR Justin Jefferson.

Jefferson spent three seasons at LSU, appearing in 30 games for the Tigers. In those 30 games, Jefferson totaled 165 receptions for 2,415 yards and 24 touchdowns. As a true freshman, Jefferson appeared in two games and was limited to one carry for four yards. In his sophomore season, Jefferson was the Tigers’ leading receiver with 54 catches for 875 yards and six touchdowns. Jefferson completed his collegiate career in 2019, a season in which he led the country with 111 receptions. His 18 receiving touchdowns ranked second behind only teammate Ja’Marr Chase, and he was third in the nation with 1,540 receiving yards.

Justin Jefferson entered his rookie season as the 4th WR on the Vikings depth chart and with a role in the offense that likely consisted of a large percentage of his snaps coming in the slot. After all, Jefferson dominated in the slot at LSU with Chase and Terrace Marshall on the outside. In his first two games of the season, the Vikings eased their rookie WR in. He didn’t start and he played less than 65% of the offensive snaps. Combined through two weeks, Jefferson had 5 catches on 6 targets for 70 scoreless yards and sat at WR81.

Week 3 he got the start and started seeing more and more snaps lined up outside. It continued in Week 4, and in his third and fourth games Jefferson had 10 catches on 12 targets for 278 yards and a touchdown. In Weeks 3 and 4, JJ sat at WR15. Jefferson was now a starting WR for the Vikings.

In Week 17, his seventh 100+ yard game of the season, Jefferson surpassed Anquan Boldin’s previous rookie record of 1,377 receiving yards back in 2003, the most ever for a first-year receiver since the Super Bowl era began in 1966. Jefferson’s 2020 season total of 1,400 receiving yards ranks just second all-time behind Bill Groman’s 1,473 yards set in 1960.

Justin Jefferson finished his rookie season as WR6 with 274.6 PPR points. In the process, he became only the 3rd of the 336 drafted receivers since 2010 to record a top-12 season as a rookie, joining only Odell Beckham Jr. and Michael Thomas. His 247.6 points are second to only OBJ’s 295 in 2014.

As we enter the 2021 season, it’s pretty difficult not to be excited for what Justin Jefferson can do with an additional three starts compared to his rookie season. Jefferson proved he belong in this league last season and will get every opportunity in the Vikings offense in 2021 to be even better. The Vikings fan in me has some concerns, however.

In 2020, the Vikings defense was historically bad and at the same time Kirk Cousins put up one of the best seasons of his career. The Vikings defense finished 2020 ranked 29th in points allowed and 27th in yards allowed. Cousins had the season he had because Minnesota was trailing in almost every game and they had to throw. His 516 pass attempts were 72 more than in 2019 and his 35 touchdown passes were a career high.

In 2021 I expected the Vikings defense to improve and for the Vikings to morph back into the run first team that they want to be. That doesn’t mean that Justin Jefferson is not a desirable fantasy asset, it just means I am cautious to think Jefferson improves on his 2020 productivity. On the flip side, one scenario that benefits Jefferson is the regression Adam Thielen is sure to experience. Kirk Cousins 6.8% TD rate was the highest of his career last season and Thielen’s 14 TD receptions on only 74 catches are directly linked. Look for both to decrease this season.

Justin Jefferson is the Vikings’ No.1 WR and his future is very bright. Entering 2022, comes with some uncertainty, none of which is Jefferson’s skill set. The main question is who is Minnesota’s QB? Kirk Cousins will be on the final year of his contract, and a contract that carries a pre-June 1 dead cap hit of $45,00,000. Post June 1, however, that dead cap drops to $0. Do the Vikings move Cousins and roll with Kellen Mond? Adam Thielen will be 32 in 2022 and Dalvin Cook will be 27. Reading the tea leaves suggests that this offense will be built around Jefferson in the coming years and possibly as soon as 2023.

I currently have Justin Jefferson ranked ranked 8th overall, and he is my 3rd ranked WR in my 1QB start-up PPR rankings. The RotoHeat consensus rankings has Jefferson ranked at 6th. The DLF consensus ADP of 6 overall aligns with where the RotoHeat consensus and my ranks fall. The DLF consensus ranking of WR1 however is more aggressive than I am willing to be. Personally at this stage of his career I can not be comfortable put Jefferson ahead of A.J. Brown or D.K. Metcalf in my WR rankings. Jefferson in my opinion is one of the best fantasy WRs in the game today, and I am very comfortable taking him in the middle of rounds in one of my 1QB league start-ups.