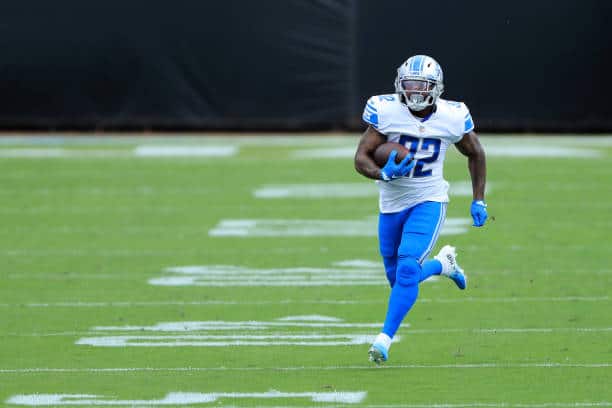 The Top 50 Series continues with the profile of Detroit Lions RB D’Andre Swift.

Georgia RB D’Andre Swift was selected by the Detroit Lions in the second (35th overall) in the 2020 NFL Draft. With the pick, the Lions made Swift the 2nd running back selected in the draft, three picks behind Kansas City Chiefs RB Clyde Edwards-Helaire.

Swift spent three seasons at Georgia, and in his 43 games with the Bulldogs, totaled 2,885 yards and scored 20 touchdowns on 440 carries, In addition to his work on the ground, Swift had 73 receptions for 666 yards and five more scores. His best season was his junior season. In 2019 Swift recorded 1,434 scrimmage yards and scored eight times on 220 touches. As a result Swift was named First Team All-SEC in his final college season.

D’Andre Swift had an up and down rookie season, that started off slowly. In an offseason that did not include on field workouts until training camp, Swift missed seven crucial practices due to a lingering leg injury. Adding to a less than desirable start to the season was the Lions addition of Adrian Peterson in September. Entering training camp, it appeared that the Lions would be counting on Swift to share the backfield workload with Kerryon Johnson, but Swift’s injury, combined with the AP signing muddied the the path to regular touches for D’Andre Swift.

In his first NFL game, Swift had 3 carries for 8 yards and scored his first career touchdown. His debut could have and should have been even better but he dropped what would have been a game-winning touchdown pass in the final seconds against the Chicago Bears. After the first 4 weeks on the season, Swift was RB33 with 41.6 PPR points. He was contributing catching the ball more than running it which kept him fantasy relevant. Through the first four weeks of the 2020 season, 57% of Swift’s touches and 75% of his fantasy points came via the pass.

Coming out of the Lions’ bye week, Swift broke out and finished as the third highest scoring back in Week 6. He continued to contribute on the ground and in the passing game and was RB4 from weeks six through ten averaging 17.2 PPR points a game. Swift’s up and down season continued, he missed week 11 & 12 with a concussion and Week 13 with a non Covid related illness.

Swift should be one of the most popular breakout picks of 2021. I expect that Swift will benefit greatly from Anthony Lynn’s system, which has consistently been amongst the league leaders in targets to running backs. Last year Swift averaged more than four targets per game and his 6.3 yards per target were above average for any back, let alone a rookie.

In 2021 he has legitimate 80-catch upside and should see more work on the ground as well. Swift had 15 touches in five games last year and averaged 20.8 PPR Fantasy points in those five games; that production would have made him the No. 4 back in Fantasy in 2020.

I currently have D’Andre Swift ranked ranked 15th, and he is my 8th ranked RB in my 1QB start-up PPR rankings. The RotoHeat consensus rankings has him right where I do at 15. Both the DLF ADP of 14 and the rank of RB8 align with where I value this running back. Swift will share work with newly added RB Jamaal Williams, especially in the passing game, but I look at the split being similar to the Jones/Williams splits in Green Bay the past few seasons. Even in a poor offense like the Lions, I like Swift and I like him a lot.

If you are looking to bolster your roster and wish to buy D’Andre Swift, it won’t be cheap, none of these players going forward in the Top-50 Series will be. Swift is the type of asset that should fetch the 1.02 at minimum in 1QB formats. If you are looking to move a player to Add Swift, it is likely going to cost you a player like an Najee Harris or Calvin Ridley type. He is a tough player to buy, and if I am only pursuing it if I feel I am a RB away from being a true contender.