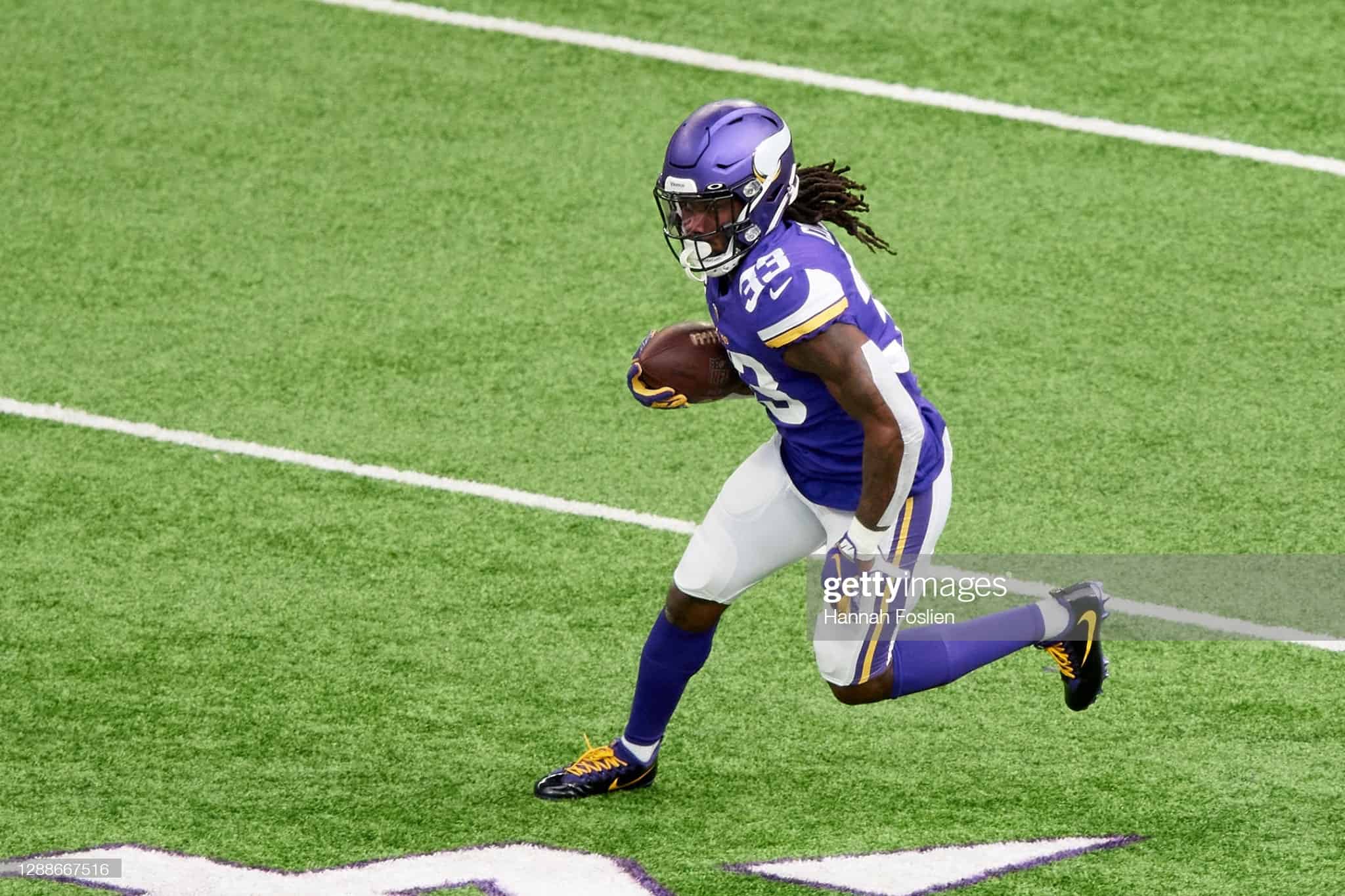 The Top 50 Series continues with the profile of Minnesota Vikings’ RB Dalvin Cook.

Florida State RB Dalvin Cook was selected by the Minnesota Vikings in the second round (41st overall) in the 2017 NFL Draft. The Cincinnati Bengals traded the 41st overall pick to the Vikings for their second round draft selection (No. 48) and their fourth-round selection (No. 128). Cook was the third running back taken in the draft behind Leonard Fournette (fourth overall) and Christian McCaffrey (eighth overall).

Cook spent three seasons at Florida State, appearing in 38 games for the Seminoles. In those 38 games, Cook totaled 4,464 yards and scored 46 touchdowns on 687 carries. In addition to his work on the ground, Cook added 935 yards and two more touchdowns on 79 receptions. His best season came in 2016 during Cook’s junior season. In 13 games he put up 2,253 scrimmage yards and scored 20 touchdowns on 321 touches. Cook’s 1,765 rushing yards set the Seminoles single season rushing record and his 4,464 set the career rushing mark.

In his first NFL game Cook set the Vikings’ rookie debut rushing record, previously held by Adrian Peterson, by rushing for 127 yards on 22 carries. Three and half games into Cook’s NFL career, he suffered a torn ACL and was lost to the Vikings for the remainder of the season. At the time of the injury, Cook was leading the NFL in rushing, and was on pace for 400 rushing yards in his first four games. He ended his rookie season with 444 scrimmage yards and two touchdowns on 85 touches.

In his sophomore season, Cook fell victim to injury once again, this time a hamstring injury. He suffered the injury in Week 2 and missed Week 3 as a result. Attempting to play through the injury in Week 4, Cook had 20 yards on 10 carries. He wouldn’t play again until Week 9. Cook finished his sophomore season as RB30 with 152 PPR points. Through two seasons, Cook had appeared in 14 of a possible 32 games.

With the “injury prone” label firmly placed upon him, Cook appeared in the Vikings first 14 games of the season before suffering a shoulder injury in Week 15 that ended his regular season. Through 15 weeks (14 games), Cook was RB2 and finished as RB6 at season’s end. His 20.9 PPR points average per game was second to only Christian McCaffrey and his 29.7.

The 2020 season was Cook’s best to date as he rushed for 1,557 yards and added another 361 via the pass. Cook scored a total of 17 touchdowns and finished the season with 321.3 points and as the RB2. Cook once again missed some time due to injury (groin strain). He appeared in 14 games and averaged a running back best 24.7 points a game. In four seasons, Dalvin Cook has missed 34% of his games, and in the past two seasons he has lowered that percentage to 12.5%.

Cook reinforced last year that he is one of the elite backs in the game and he should be drafted with a top-five pick in all formats. Cook’s 16-game pace over the past two seasons puts him at 2,041 yards from scrimmage, 55 receptions and 17 touchdowns. The problem is that Cook has yet to achieve a full 16-game season.

When breaking down Justin Jefferson a few articles back, I stated that with an improved defense in Minnesota, that I expect the Vikings to revert back to a more run focused attack. The increase in run to pass plays provides Cook with an overall RB1 finish within his range of outcomes. In the 17-game 2021 season, I expect the Vikings to give RB Alexander Mattison the largest workload of his career. Cook’s elite skillset, combined with pass catching ability, will keep him within striking range of RB1 regardless of the work Mattison sees.

Dalvin Cook’s ceiling is a top-5 season, and his floor remains much lower. According to Sports Injury Predictor, Dalvin has an 87% chance of injury in 2021. Cook’s abilty or inability to stay healthy will once again be the determining factor in his fantasy finish.

Looking past the 2021 season, I wouldn’t expect Cook’s role to change much in the Vikings’ offense. Cook, along with Justin Jefferson, are the key cogs in the Vikings offense regardless of the 9 members they line up with each snap. Cook (barring injury) will remain a top-10 RB for the foreseeable future.

I currently have Dalvin Cook ranked 3rd overall, and he is my 3rd ranked RB in my 1QB start-up PPR rankings. The RotoHeat consensus rankings has Cook ranked one spot lower at 4. The DLF consensus ADP of 4 aligns with where the RotoHeat consensus and my ranks fall. The DLF consensus ranking of RB4 does as well. I remain optimistic that Cook will stay healthy and deliver. I also believe that the Vikings will be strategic with Cooks usage going forward. In the past two season, Dalvin Cook has averaged 23.5 touches a game. In 2021 and beyond I feel that number declines to 18-20 a game. Regardless of this possible decrease in touches, Cook remains a top 5 back for me.