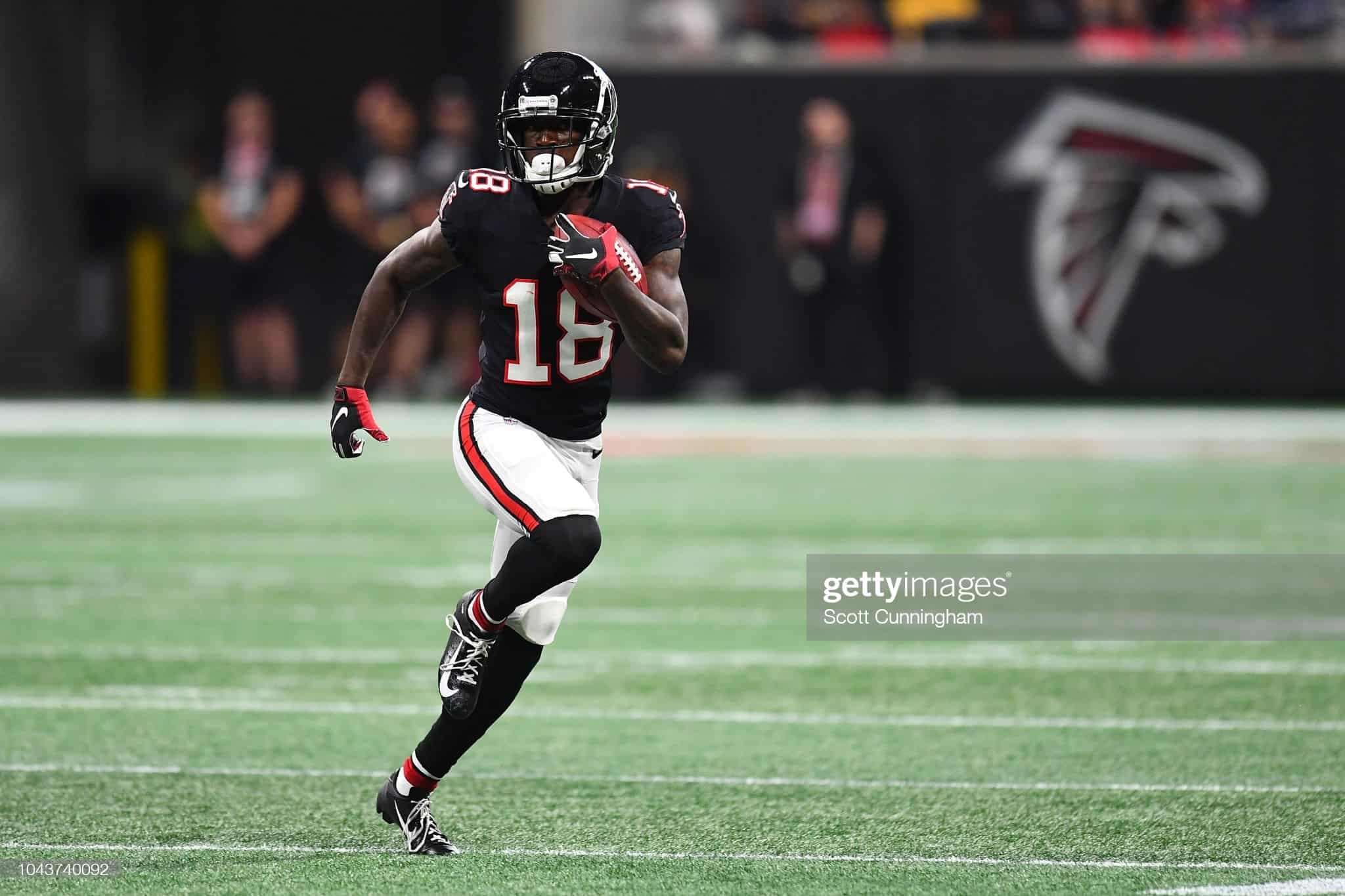 The Top 50 Series continues with the profile of Atlanta Falcons’ WR Calvin Ridley.

Alabama WR Calvin Ridley was selected by the Atlanta Falcons in the 1st round (26th overall) in the 2018 NFL Draft. With the pick, the Falcons made Ridley the 2nd wide receiver selected in the draft, two picks after Carolina selected Maryland WR D.J. Moore.

Ridley spent three years at Alabama, appearing in 44 games for the Crimson Tide. In those 44 games, he totaled 2,781 yards on 242 receptions and he scored 19 touchdowns. In addition to his receiving stats, Ridley ran the ball 8 times for 40 yards and a touchdown. His best season came in his freshman year in 2015, he totaled 89 catches for 1,045 yards and 7 touchdowns.

Four weeks into Ridley’s professional career he was named the Offensive Rookie of the Month for the month of September and tied an NFL record for a rookie with six touchdown receptions in his first four games. After four weeks, Calvin Ridley was averaging 19.7 PPR points a game and sat in 10th in WR scoring. Ridley went on to finish his first season with 64 receptions for 821 yards and 10 touchdowns. His 206.80 points were 22nd best at the wide receiver position.

In 2019, Ridley posted nearly the identical stat line to his rookie season. He finished his sophomore season 63 catches, 866 yards and seven touchdowns. The difference is he accomplished this stat line in 3 less games. In the third quarter of a Week 14 win over the Carolina Panthers, Ridley suffered an abdominal injury that would end his season. He finished the year as WR27. He entered Week 14 as WR19.

Last season proved to be Calvin Ridley’s best season to date. In a season in which he was thrust into the top receiver role for Atlanta, Ridley stepped up and delivered. In a season in which franchise WR Julio Jones was limited to 9 starts, Ridley turned in a career high in targets (143), receptions (90), and receiving yards (1374). His 9 receiving touchdowns were second best to his rookie season (10). Calvin Ridley averaged 18.8 PPR points per game and finished as WR5 with his 281.5 points in 15 games.

Calvin Ridley is one of the best route runners in the game today. He separated with ease at Alabama, using advanced route-running to create separation against all types of man coverage, a skill-set that he brought with him to the NFL. He enjoyed a breakout season in 2020, and 2021 is shaping up as a season in which he establishes himself among the elite.

Initially when studying Calvin Ridley for this Top-50 series, I was concerned if Ridley would be able to maintain the volume necessary to remain in the top-10 at his position with Julio Jones in the offense and the addition of rookie TE Kyle Pitts. In addition, Atlanta has a new Head Coach in Arthur Smith, who has proven he likes to run the ball and feature an efficient passing game as a compliment.

Well, Julio Jones is off to Tennessee after a widely expected trade. The trade solidifies that Ridley is the No.1 WR in this offense. Calvin Ridley has appeared in 44 NFL games, 36 with Julio in the offense and 8 without Jones in the offense. In his 36 games as the compliment to Jones, Ridley has averaged approximately 6 targets, 4 receptions, 70 yards and .67 touchdowns per game. In his 8 starts with Julio on the sidelines his averages jump to 11 targets, 7 catches, 114 yards and .25 touchdowns.

Looking past the 2021 season, I expect Ridley to remain in the top-12 at his position if not higher. There is, however, some uncertainty at the QB position in Atlanta, and that is sure to impact the Falcons’ offense including Calvin Ridley. Matt Ryan will be 37 entering the 2021 season, which is likely his last in Atlanta. Ryan is currently protected by a contract that according to Over The Cap carries dead cap hits of $65,437,500 this season, $40,525,000 in 2022, and $15,612,500 in 2023. Regardless of the QB situation in Atlanta I see Ridley with his above average route running skills remaining a top fantasy WR for the foreseeable future. There are a select number of WRs that are QB proof, and Calvin Ridley is one of them.

Calvin Ridley enters 2021 with WR1 overall in his range of outcomes. The lead wide receiver for the Falcons has been a top-five fantasy option for a decade under Matt Ryan, and I believe that continues for at least one more season.

I currently have Ridley ranked 17th, and he is my 8th ranked WR in my 1QB start-up PPR rankings. The RotoHeat consensus rankings has him one spot higher at 16. In my redraft rankings that come out later this month I will have Calvin Ridley in my top-5 WRs. My dynasty rankings rank within a 2-3 year window, and the uncertainty of where this Atlanta offense is heading is certainly baked into my ranking of Calvin Ridley.

The DLF ADP of 23 certainly feels low to me, as I am not comfortable waiting until the back end of round two to grab this elite WR. I believe that if you wish to roster Calvin Ridley you need to start looking for him in the early-to-mid portions of round two. DLF has Ridley at WR8, which aligns with my ranking and highlights the difference on where we value high end WRs.

If you wish to sell Calvin Ridley to kick-start a rebuild, he should bring you a handsome return. I would set the price at the 2022 1.01 plus a player like RB Javonte Williams or WR Tee Higgins. Selling a top tier WR, although not suggested, should bring back a package that will kick-start your rebuild.