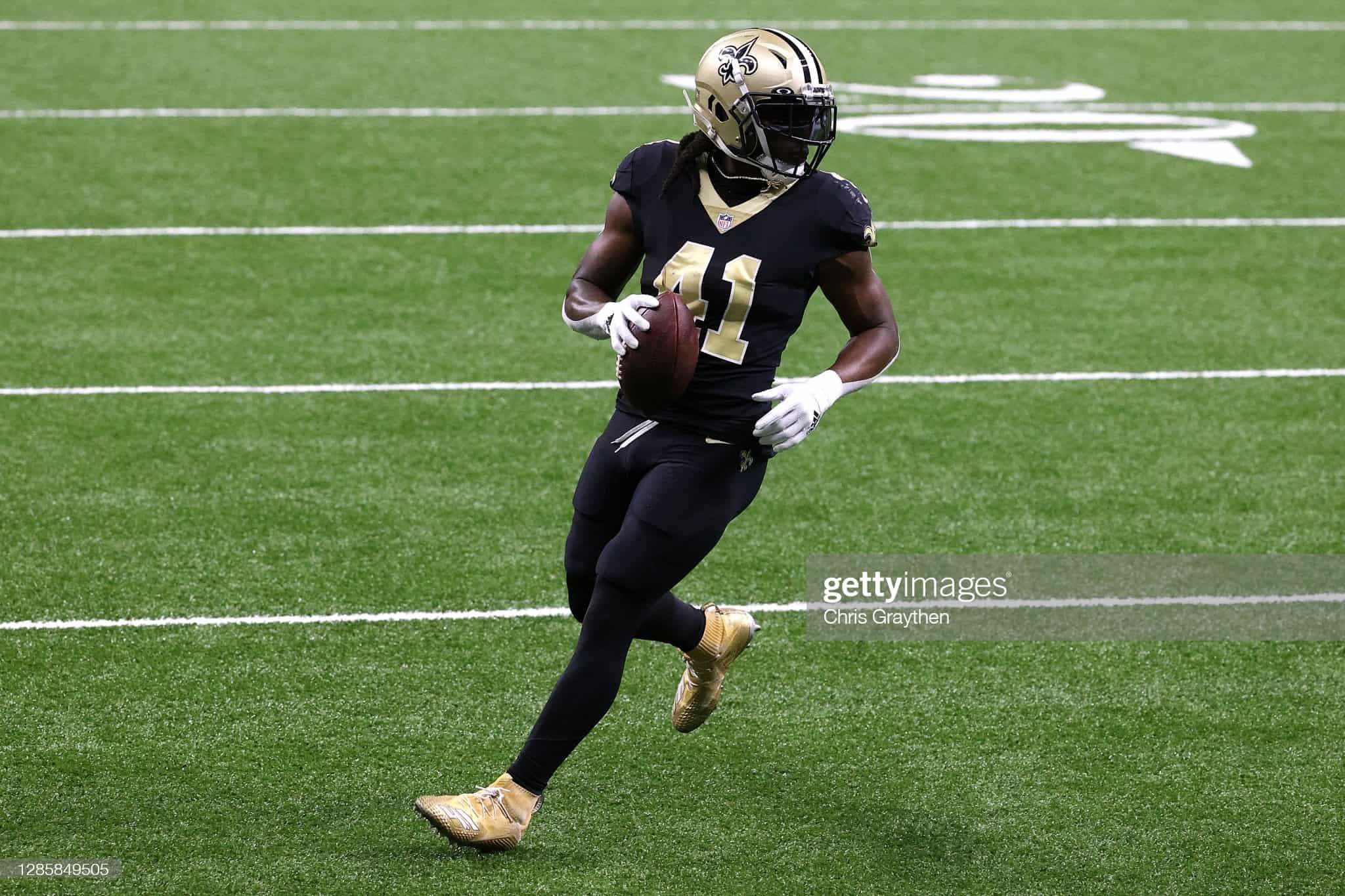 Tennessee RB Alvin Kamara was selected by the New Orleans Saints in the third round (67th overall) in the 2017 NFL Draft. With the pick, the Saints made Kamara the 5th running back selected in the draft. Kamara is yet another back from the 2017 draft class which is widely considered one of the best on record.

Kamara spent two seasons at Tennessee, appearing in 24 games for the Volunteers. Prior to joining the Vols, Kamara had stops at Alabama and Hutchinson Community College. Kamara never saw the field at Alabama, as he had preseason knee surgery, and redshirted as a true freshman when he was unable to crack a lineup that featured Derrick Henry, T. J. Yeldon, and Kenyan Drake.

After being banned from practicing and suspended for the Crimson Tide’s bowl game due to behavioral issues, Kamara transferred to Hutchinson. In nine games, Kamara ran for 1,211 yards (134.6 per game) with 18 touchdowns and led the Blue Dragons with 1,469 yards of total offense and 21 touchdowns. His stellar season propelled Kamara to one of the top JUCO prospects in the nation.

In 2015, Kamara transferred to the University of Tennessee. He totaled 1,294 rushing yards, 683 receiving yards and scored 23 touchdowns in his 24 games with the Volunteers. Kamara’s numbers at Tennessee are even more impressive than they seem as he accomplished these numbers while starting in only 8 of his 24 games. At the conclusion of the 2016 season, Kamara made the decision to forgo his redshirt senior season and enter the 2017 NFL Draft.

Alvin Kamara continued to produce at a high level once joining the NFL. In his rookie season, sharing a backfield with RB Mark Ingram, he posted 1,554 scrimmage yards and scored 13 touchdowns on only 201 touches. Kamara finished third among rookies in rushing yards behind Kareem Hunt and Leonard Fournette, and his 6.07 yards per rush was the most ever by an NFL rookie. His 81 receptions led all rookies and trailed only Le’Veon Bell among the league’s RBs. He finished as RB3 in PPR scoring with 315.4 points and was named the 2017 NFL Offensive Rookie of the Year.

Kamara started the 2018 season as the Saints’ primary running back with Mark Ingram serving a four game suspension to start the season. After 4 weeks, Kamara sat atop the RB standings averaging 34 PPR points a game. Overall, Kamara’s rushing totals increased in terms of carries and yardage, and he saw his receiving yards dip to 790 yards on 81 receptions for the second straight season. He finished his sophomore season with 1,592 scrimmage yards and 18 touchdowns on 275 touches. He finished as RB4 with 354.2 PPR points.

Entering the 2019 season with Ingram off to Baltimore, Kamara’s fantasy managers had images of the first four games of 2018 dancing through their heads. The reality was a fairly solid start for Kamara, through the first five weeks he sat at RB6 averaging 19.4 points a week. In Weeks 6 and 7, Kamara was battling ankle and knee injuries that ultimately led to him missing the Saints’ Week 8 and 9 contests. He returned after the Saints Week 9 bye and appeared to be less than 100% the remainder of the season. Kamara finished as RB9 in 2019 with 248.5 PPR points in 14 games.

Last season, Alvin Kamara had his most successful fantasy season in his 4 seasons. Kamara led all running backs with 377.8 points in 15 games. He set career highs in rushing yards (926), rushing touchdowns (16), receptions (83), and receiving touchdowns (5).

After four seasons, Kamara has averaged 1,541 scrimmage yards and 14.5 touchdowns a season. His 1,295.9 PPR points tops all 26 backs drafted in 2017. In addition, Kamara has finished as a top-12 RB in each of his four seasons, joining Ezekiel Elliot as the only RBs to have four top-12 seasons to start their career of the 171 drafted running backs between 2010 and 2017.

Entering 2021, Alvin Kamara will have a new QB for the first time in his career to start the season. Drew Brees announced his retirement and the Saints will go with Jameis Winston, Taysom Hill or a combination of them both in 2021. Regardless of the QB under center, Kamara’s receiving totals almost certainly will decline.

Brees targeted his running backs at least 28 percent of the time in each of the last four years. Jameis Winston hasn’t targeted running backs more than 18 percent of the time in each of his last four seasons as a starter. In 2020 in the four games started by Taysom Hill, Kamara saw a reduction of 3 targets, 3 receptions, and 35.85 yards per game on average compared to having Brees as his QB. The offense is also not nearly as likely to be scoring as many points without Brees. One positive is I would expect Kamara to set a career high in rushing attempts in 2021.

Post 2021 and looking ahead to the 2022 season is beyond difficult to project Kamara and the Saints’ offense. We still don’t know who the Saints’ QB will be and Alvin Kamara will be a 28 year old running back. I am a big Alvin Kamara fan, but I think it’s time to start considering selling the Saints’ back at the end of the 2021 season.

I currently have Alvin Kamara ranked 5th overall, and he is my 5th ranked RB in my 1QB start-up PPR rankings. The RotoHeat consensus rankings has Kamara ranked at 5th as well. The DLF consensus ADP of 5 overall aligns with where the RotoHeat consensus and my ranks fall. The DLF consensus ranking of WR5 does as well. I remain optimistic that even with a reduction in targets in an offense that likely regresses as a whole that Kamara will still be a top-5 dynasty RB. Where it starts to get dicey for me is post 2021, making the ranking RB5 riskier than it likely should be.