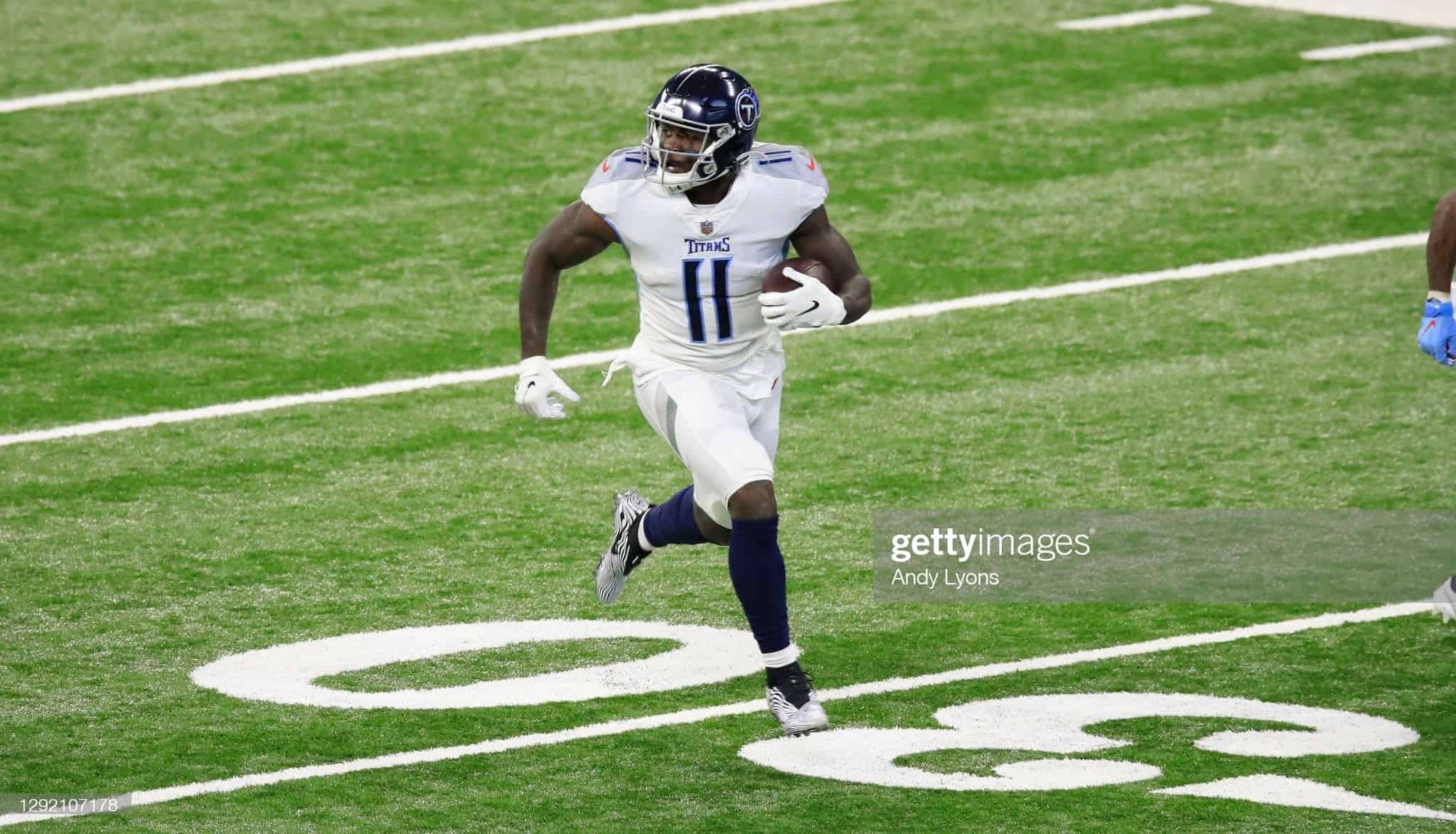 The Top 50 Series continues with the profile of Tennessee Titans’ WR A.J. Brown.

Ole Miss WR A.J. Brown was selected by the Tennessee Titans in the second round (51st overall) in the 2019 NFL Draft. With the pick, the Titans made Brown the 4th wide receiver selected in the draft. Brown came off the board after Marquise Brown, N’Keal Harry, and Deebo Samuel were selected by the Baltimore Ravens, New England Patriots and the San Francisco 49ers, respectively. Brown was selected 13 picks before his Ole Miss teammate D.K. Metcalf.

Brown spent three seasons at Ole Miss, appearing in 34 games for the Rebels. In those 34 games, A.J. totaled 189 receptions for 2,984 yards and 19 touchdowns. As a true freshman, Brown finished fourth among SEC freshmen with 2.4 catches per game and fifth with 34.3 receiving yards per game. In his sophomore campaign he hauled in 11 of his 19 collegiate touchdowns, and during his 2018 junior season, he led the team in receiving, finishing with 85 receptions for 1,320 yards and six touchdowns and was named first-team All-SEC for the second consecutive year.

A.J. Brown’s rookie season was defined by his starting quarterback. Marcus Mariota started the 2019 season for the Titans and held his role until being replaced by Ryan Tannehill midway through the Titans’ Week 6 loss to the Denver Broncos.

During the first six weeks of 2019, Brown had been targeted 23 times. He caught 14 of them for 273 yards and a pair of touchdowns. After Week 6, Brown was WR52 and his QB Mariota was QB20. During the 10 games from Week 7 through to the end of the season, Brown was targeted 61 times, securing 38 of those passes for 778 yards and 6 touchdowns. In that 10 game run, Brown was WR7 and Tannehill was QB3.

Despite the limited amount of targets, Brown was successful mainly because of his 20.47 yards per reception. A.J. Brown finished 2019 as the highest scoring rookie WR with 217.1 PPR points and as WR21. Brown slid in rookie drafts in 2019 mainly due to his landing in Tennessee. After concluding his rookie season, Brown was firmly on dynasty managers radars who no longer were concerned with his draft day landing spot.

Brown entered 2020 with his start-up ADP soaring up to 22 from 68 the previous year, and with Ryan Tannehill firmly in the starting role for Tennessee. Brown concluded his sophomore season with 70 receptions for 1,075 yards and 11 touchdowns on 106 targets. What makes his 2020 season all the more impressive is he accomplished these numbers in 14 games. Brown missed Weeks 2 and 3 of the season with a knee injury that the Titans feared would have cost him the remainder of the season. Brown played through the pain and dominated in the process.

As we enter the 2021 season, Brown is recuperating from offseason surgery on both of his knees. At this time, he is questionable for the Titans’ Week 1 match-up with Arizona. In addition to his recovery, the Titans bolstered their receiving corps by trading for future hall of fame WR Julio Jones.

The addition of Jones has a significant impact on Brown’s fantasy value, although I don’t see it as the negative that others do. Prior to the addition of Jones, the Titans depth chart was barren. In addition to Brown was former Rams WR Josh Reynolds, rookie Dez Fitzpatrick, and very little else. The possibility of Brown seeing 180 targets wasn’t out of line, even in the Titans run first offense. Jones will command targets but will also help keep the opposing defenses honest.

Without Julio, A.J. Brown was likely double and tripled teamed all season long. Corey Davis, Jonnu Smith, and Adam Humphries vacated 192 targets from a year ago with their departure. There remains plenty in this offense for Brown and Jones, especially if they throw more as anticipated in 2021.

Post 2021, the value for Brown remains high and he should be in the top 3-5 in dynasty ADP conversation. He will be 25 years old entering the 2022 season and in the prime of his career. Tannehill will have four more years on his deal, and the possibility that Jones and or RB Derrick Henry are gone is realistic. Should the last two players leave the Titans, Brown, barring a horrific 2021 season, should be the consensus WR1 in dynasty entering 2022.

I currently have A.J. Brown ranked ranked 6th overall, and he is my top ranked WR in my 1QB start-up PPR rankings. The RotoHeat consensus rankings has Brown ranked at 6 as well. The DLF consensus ADP of 7 overall aligns with where the RotoHeat consensus and my ranks fall. The DLF consensus ranking of WR2 does as well. I believe that A.J. Brown is the best fantasy WR in the game today and I am very comfortable taking him in the middle of round one of my 1QB league start-ups.

A.J. Brown is a hold in my opinion. Trying to buy Brown could possibly gut your roster and dramatically reduce your future draft picks. Selling, although it could bring you a huge return, likely doesn’t benefit you in the long run as you rebuild. Brown is the type of dynasty asset that managers should build around.