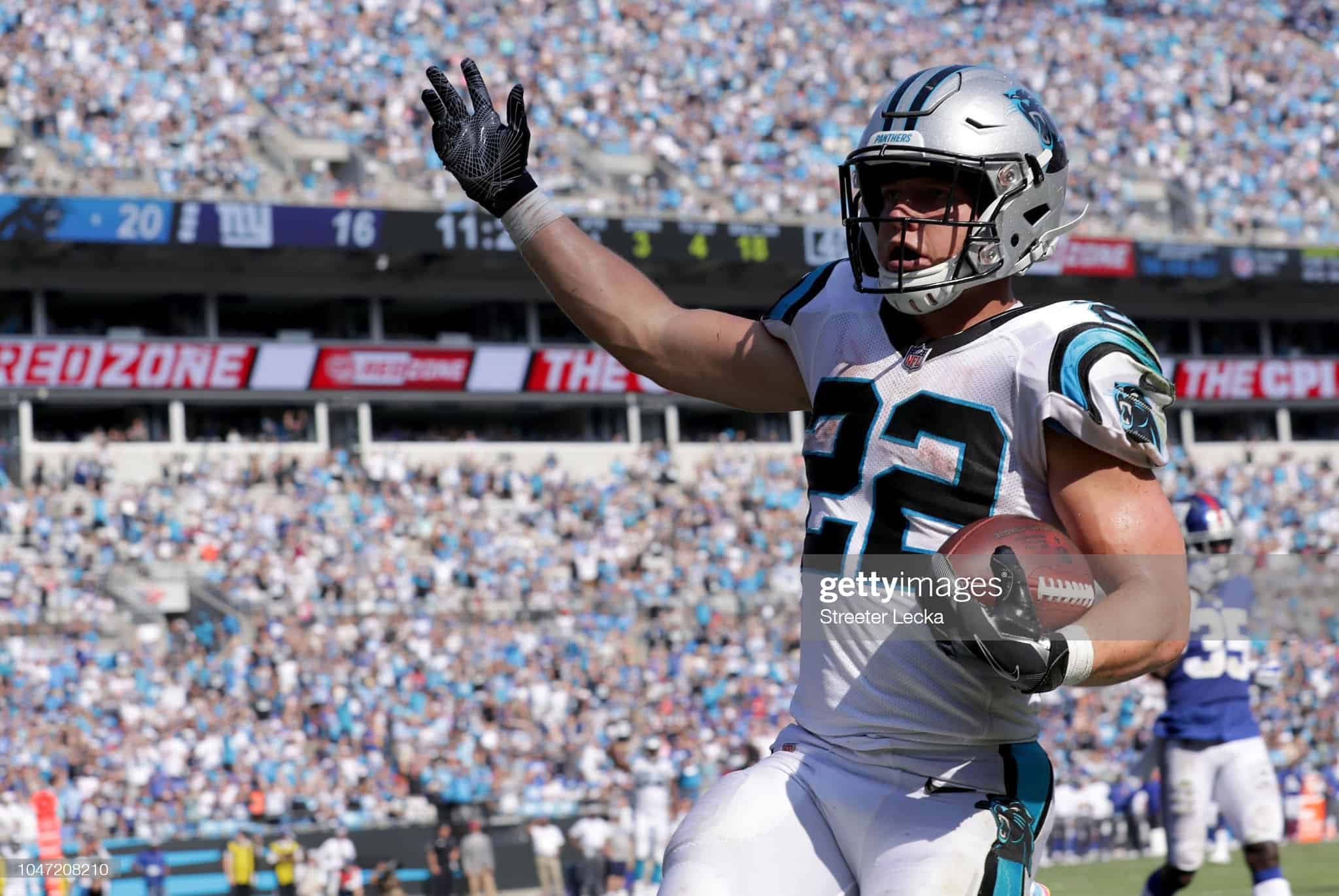 If you haven’t already, check out our Top 10 players to buy for dynasty.

These articles will get you ready for your dynasty startup drafts, or let you know what players you should target in trades and who you should send away. So start reading, and get ahead of the rest of your dynasty rivals!

When it comes to ranking RBs, there are two things you generally want to look at. The first is to look at who gets the volume, because as we like to say: “Volume is king” in fantasy football. Combine that with high efficiency, and you have yourselves a top running back. So, let us take a look who the cream of the running back crop is, shall we?

Despite a season where he played in only 3 games, CMC still is, and still should be, the unquestioned 1.01 in 1QB leagues. In the three games he did play, McCaffrey finished with an insane 30.1 fantasy points per game.

He is a weekly game-winner for your fantasy team, regardless of who is in at QB, but the fact that Panthers are looking to upgrade at the QB position should only be an improvement for the entire offense.

He is locked in as the RB1 in your Top 10 Dynasty Running Backs.

Cook had an incredibly good season in 2020. He missed just 1 game this season, which is particularly good for him. As a result, he turned in a season where he ended up as the RB2 in fantasy.

That, combined with questions surrounding most of the other top RBs, leaves Cook as the dynasty RB2 of the Top 10 Dynasty Running Backs.

The Vikings’ offense largely runs (pun intended) through Cook, and that will not change after the team gave him a big contract extension prior to last season. This makes Cook a secure pick at the top of the draft.

Here we have what I believe will be the first controversial pick of this ranking–Saquon Barkley at RB3. People are worried his injury will affect him, and some people are even worried about the very lackluster half he put together against the Steelers in Week 1 of 2020.

I am here to tell you that none of that matters. Saquon is a beast who gets work in both the run and the pass game. He can take it to the house on any play, and he is the best player on the Giants.

You should not worry about Barkley despite him missing the last 1½ season with injuries. The dude is a freak athlete, who has just been unlucky with freak injuries. That does not make him injury prone.

As for the performance against the Steelers, it was a Steelers defense with all their players healthy, against a Giants O-line who had a lot of things they needed to figure out.

Saquon is your dynasty RB3, no doubt in my mind.

At 4, we have the guy most others would likely put at 3 in their Top 10 Dynasty Running Backs, Alvin Kamara. The RB1 of this past season, Kamara has shown the ability to produce in a big way, but most of that has been with Drew Brees under center.

Entering 2021, the biggest question is who is going to be the Saints’ QB, and is that QB going to utilize Kamara nearly as much in the passing game as Brees did? I think it is unlikely.

Saints HC Sean Payton is still going to scheme a lot for Kamara, who is his best offensive weapon, but we also did see a dip in production for Kamara when Brees was out and Taysom Hill was the QB. From Weeks 11 to 14, Kamara was RB11, which is a significant fall.

I am not saying he is going to be that “bad” without Brees, but a Top 3 RB does seem less likely to me, regardless of whether Winston or Hill becomes the starter.

Another surprise to some people perhaps, as the first newcomer to this list compared to previous seasons, JT has moved in to my Top 5 for multiple reasons. He looked particularly good in the second half of the season, largely in part because of improved vision and power, as well as his ability to make the first defender miss.

He was the catalyst the offense needed down the stretch, and he is clearly being trusted to touch the ball 20+ times by the coaching staff.

What locks him in as my RB5 for the Top 10 Dynasty Running Backs is his youth combined with an offensive line that is among the best in the league. Whoever the QB is for the Colts in 2021, they will lean heavily on Jonathan Taylor to be the lynchpin of this offense.

The King comes in at RB6 of the Top 10 Dynasty Running Backs. Don’t get me wrong, Derrick Henry is one of the best RBs in the league and might be top 3 or 4 for just this coming season, but in dynasty, we must plan a little further ahead.

Henry is built like a tank, which works wonders for his longevity, but he has also had a very heavy workload over the last 3 seasons. In 2020, he had 397 touches and 41 more than the #2 in touches. Since 2018, King Henry has 948 touches. That is the second most in the NFL in that span.

Even with a new OC, I do not think anyone expects the Titans to change their tune. Derrick Henry is going to see close to 400 touches again this upcoming season, and despite his hulking stature, at some point in the not-so-distant future, the wheels are going to fall off.

The Titans have an out in Henry’s contract after the 2021 season, which will only cost them 6 milion in dead cap. After 2022, that will only be 3 milion in dead cap. I see this as the Titans basically saying “We are going to run Henry in to the ground over the next few years and then discard him.” At that point he will either be 28 or 29.

So, when you’re drafting Henry, it is with immediate success in mind, which is why he falls to RB6 for me.

The best pure runner in the league finds himself slotting in at RB7 in in the Top 10 Dynasty Running Backs of 2021 list. Nick Chubb is a great running back. He is a threat every time he gets the ball, and he is in one of the most run heavy offenses behind one of, if the not the best, O-lines in the entire NFL.

Frankly, if not for the fact that Kareem Hunt is also on the Cleveland Browns, Chubb would without question be in my Top 5. He has the volume, he gets goal-line work, and he can take it to the house on longer runs. He has it all, and he is electric to look at.

The positives heavily outweigh the negatives with Chubb, landing him solidly in the Top 7.

Oh, how the mighty have fallen. A top 5 lock last season, Ezekiel Elliott now finds himself as the RB8 amongst Top 10 Dynasty Running Backs rankings.

Remember when I said just before that Henry had the second most touches since 2018? Yep, that’s right. Ezekiel Elliott leads that category at 1,032 touches. The silver lining for Zeke is that he is still “only” going to be 26 years old when the new season begins, and his huge contract means he is still going to be getting the volume.

With Dak Prescott back healthy at QB, Zeke is still going to be eating, but the touches are taking their toll, and I predict that Elliott has 2-3 years left as an RB1. Given the influx of talent at the RB-position lately, 2 years might be the real ceiling here.

As with Henry, Zeke is a win-now player in fantasy, but his volume and his proven production still keeps him in the Top 10 Dynasty Running Backs.

Another sophomore back makes the Top 10 Dynasty Running Backs of 2021, with D’Andre Swift sliding in at RB9.

We saw sporadic glimpses of fantasy greatness about halfway through the season from Swift, who finished as RB18 despite missing 3 games, and being a 2nd and 3rd stringer for several games this season.

Some of the big positives for Swift was his involvement in the passing game, having 5 targets in 8 of his 12 games (discounting Week 17), which is very good pass game volume for a RB. He also found the end-zone 10 times despite his limited volume as a rookie.

This all leaves an excellent promise of things to come, and with Detroit downgrading at QB, whilst hiring a “hard-nosed” HC in Dan Campbell, things are looking very bright for Swift, who figures to possibly climb the Top 10 Dynasty Running Backs rankings in the seasons to come.

Akers had a rough start to his rookie season. Shortened training camp and an injury very early on both meant it took time for Akers to get acclimated to the NFL.

However, when Akers was called upon to carry the load, he showed what he can do. It wasn’t all great, but to me, it was great enough that I see it as a sign of things to come.

In 2021, with a full offseason and Matthew Stafford at QB, I believe this Rams offense will start utilizing Akers more as their new Todd Gurley. He showed he can do damage both running and catching, and McVay is an innovative coach when it comes to offensive playcalling, so Akers will be put in situations to succeed.

As a result, Akers, currently, rounds out my Top 10 Dynasty Running Backs for the 2021 season.

Those are your top 10 Dynasty RBs for 2021. But as with any list, it is never truly complete without a few honorable mentions.

Aaron Jones almost made this list. He is a crazy efficient player, practically at the same level as Alvin Kamara. If I knew he would be back with the Packers or land somewhere like the 49ers or a similarly good landing spot, he would absolutely make his way into the top 10. The uncertainty surrounding his situation, however, edges him just out of Top 10 contention.

My other honorable mention goes to Antonio Gibson. Washington showed an incredible willingness to give him a high number of touches (mostly carries though), despite only touching the ball 34 times in college. His natural pass-catching ability is bound to make him more involved in that aspect for the 2021-season. He is going to be a workhorse RB for a team that NEEDs to run the ball to keep its incredible defense rested.

As usual, if you like the content we provide here at RotoHeat, feel free to check out the RotoHeat Youtube channel, with livestreams and rookie bios, or one of our Facebook communities – The RotoHeat Dynasty community or the RotoHeat Redraft community, where you can ask any questions you’d like answered.