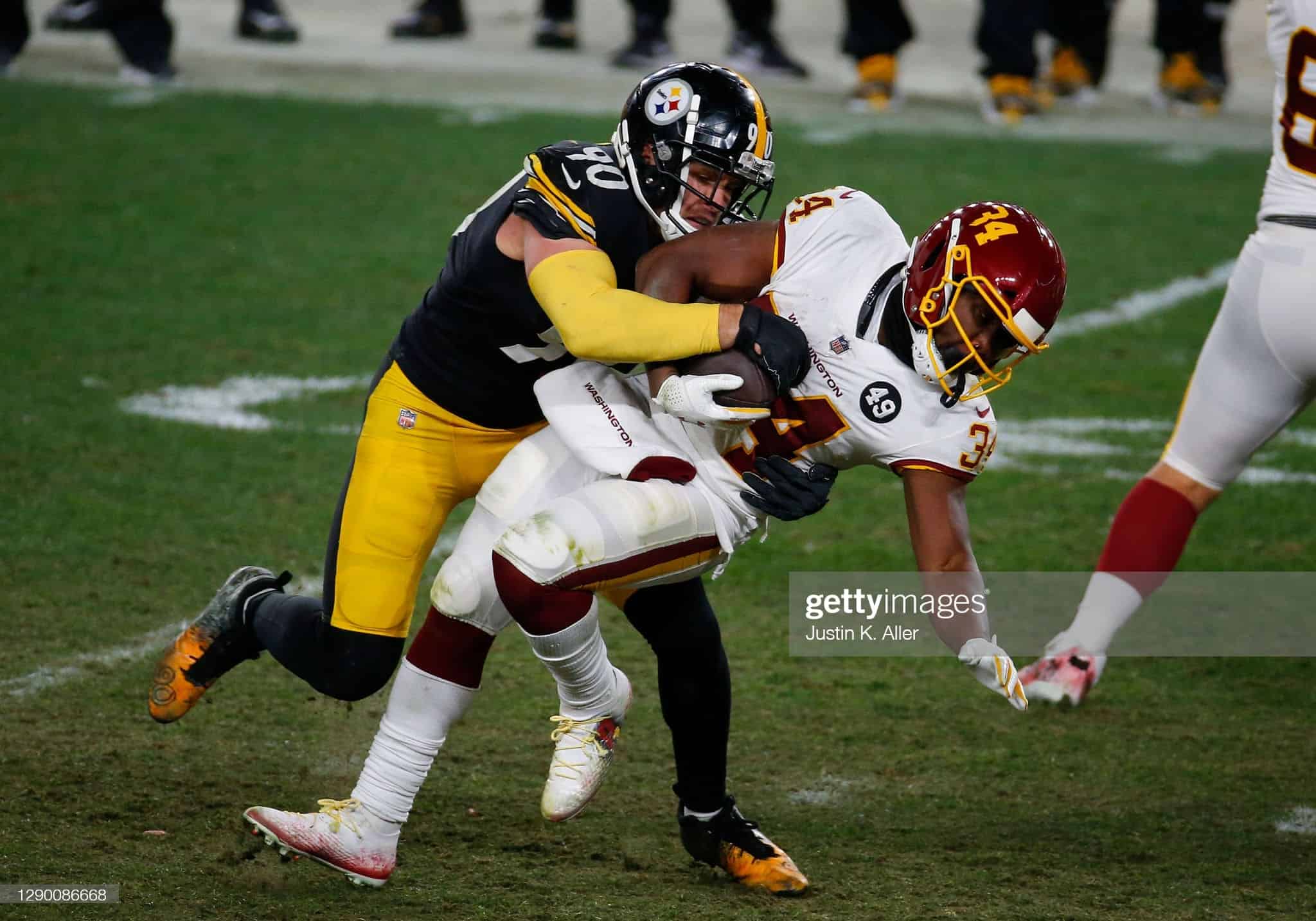 As we reach the end of our Top 10 in the 2021 Offseason list, we wanted to get into a relatively new position that some leagues are offering. The Edge position usually combines 4-3 defensive ends and 3-4 outside linebackers. We do not have a bunch of historical edge data to go over with these players for now, but your top end outside linebackers and defensive ends are usually a good bet. This is still dynasty, and age does matter for rankings.

**Please note: Rankings per year referenced are based on the scoring discussed here. Statistics are from Pro Football Reference.

Garrett is under contract through the end of 2026 and the Browns offensive efficiency improved remarkably over the course of 2020. While it remains to be seen if that continues, offensive improvement will only help the defense and their opportunities. With age, talent and situation all looking up, Garrett is a top shelf Edge option for fantasy owners.

Only one year under his belt and Chase Young was as advertised coming out of college. Only 21 years old last year, and he ended his rookie campaign with 15 games played and 32 solos, 12 assists, 10 TFL, 7.5 sacks, 4 PD, 4 forced fumbles, 3 fumble recoveries and 1 TD. That was good enough to be the #9 Edge!

Chase has a great set of defensive linemen playing alongside him (Daron Payne, Jonathan Allen, Montez Sweat and Matt Ioannidis), and should only grow and improve in the coming years. The sky is the limit for him, and I am excited to see what is down the line for him. He and Garrett about pretty much interchangeable on this list for me, but have Garrett higher as he has done it longer.

This may be too high for some, given that Bosa has one good year under his belt, but much like Chase Young above, Bosa had a heck of a rookie year. He tied as the #16 edge that year with 32 solos, 15 assists, 16 TFL, 9 sacks, 2 PD, 1 forced fumble, 2 fumble recoveries and 1 INT. His second year was cut short after two games due to a torn ACL in his left knee. Torn ACLs are not the death knell they used to be, and given when it occurred in the season he should be fully recovered. Even if we have to wait for 2022 for him to be fully healed, as we often do, I fully expect Nick to be a top Edge player going forward for many years.

Mack’s contract is easier for the Bears to get out of after the 2021 season, but even if he finds himself on a new team within the next few years, Mack has the talent to fit in with and succeed on any team. Given that the Bears seem to be making a play for a top tier QB and going for it now, I expect Mack to remain with the Bears the next few years and continue his defensive dominance.

I expect Landry’s snap share going forward to be more in line with his 2018 and other edge players, which should help his overall production. Pass rushers are more effective when they have some time to rest, and being on the field for nearly every defensive snap makes that difficult. Either way, Landry has proven to be a high quality edge rusher and NFL players with a bright future ahead of him.

Sweat will only be 25 for the 2021 season, and with the talent on the Washington defensive line, offenses will not be able to focus on stopping Sweat. If the Washington offense can take a step forward and be regularly productive the defensive ends in Washington will have even more opportunities to get to the QB and make the plays that make a good edge player valuable in fantasy.

2020 was not as impressive, but still a great year for Barrett. He ended 2020 with 43 solos, 14 assists, 11 TFL, 8 sacks, 3 PD, 2 forced fumbles and 1 safety; that was good enough to be Edge #13 on the year. If Barrett resigns with Tampa Bay, there is no reason to think he can’t stay doing what he has done with them. Given his landing spot uncertainty, and only having two good years out of seven in the league, I have him lower than his 2019 results indicate may be appropriate.

Burns will only be 23 this season, and on an improving defense that spent all of its 2020 draft picks on defense. He is a highly athletic, with great size (6’5”, 250 lbs), speed and burst. He still has room to grow with his tackling, but has top tier edge upside. He is a great edge to go after as his name does not carry the same weight as others like Young, but he has the talent to be right up there with him.

This slot was hard to pick, but ultimately I went with Chubb, who I see as similar to Nick Bosa in terms of situation. Chubb had a great rookie year in 2018, playing all 16 games and ending with 41 solos, 19 assists, 14 TFL, 12 sacks, 2 forced fumbles, 1 fumble recovery and 1 PD. This was good enough for Edge #11. His sophomore year was cut short after four games though when he had a left knee ACL tear.

He came back in 2020 and was Edge #31. As mentioned with Bosa, it takes time to come back from an ACL tear, but with a good first year back and age on his side (he will only be 25 this season) I expect Chubb to be closer to his 2018 self going forward than his 2020. What becomes of Von Miller will matter in terms of defenses focusing more on Chubb, but given his abilities and having learned from Von, I am banking on Chubb improving going forward.

**Other names under consideration here were Danielle Hunter, Joey Bosa, Maxx Crosby and JJ Watt. Each of them has reasons for being left off, and if you’d like to discuss, find me on Twitter!

This wraps up our Top 10 Dynasty Players in the 2021 Offseason series, but don’t worry, we have more articles and series (like our Dynasty Battles) coming your way as we approach the draft! You can catch all our video content on YouTube. Be sure to subscribe and click the notification bell to ensure that you don’t miss any of our other great content! We have free rankings of all kinds over at RotoHeat.com, and make sure to check out our 2021 Rookie Draft Guide!