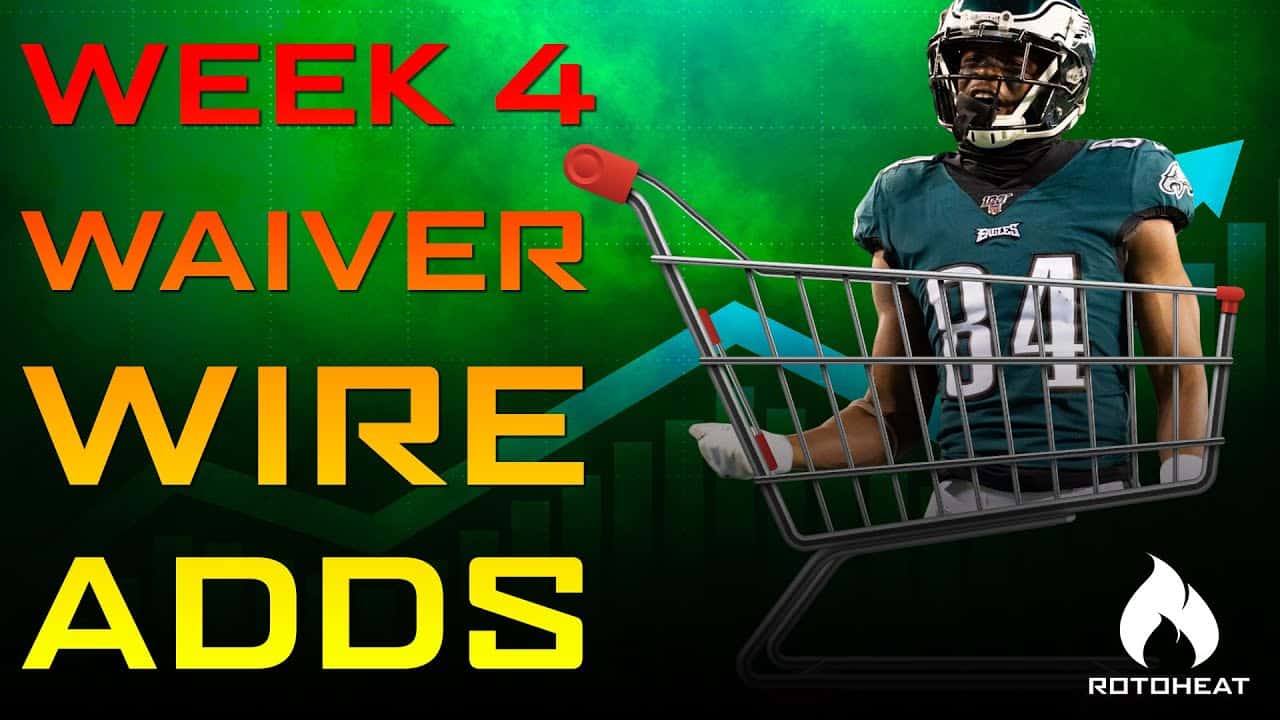 Each and every week in Fantasy Football there are surprise performances and there are injures. Both of these occurrences, tend to lead to opportunity and opportunity leads to touches. Touches lead to fantasy points. Week 2 was unlike anything of recent memory when it comes to injuries, and injuries to big name fantasy assets. How you navigate your waiver wire this week may just save your season. Each week Rob Silvers brings you waiver wire adds and today we bring you with the NFL Week 4 Waiver Wire Pickups.

ORCHARD PARK, NY – SEPTEMBER 27: Rob Havenstein #79 of the Los Angeles Rams looks to make a block as Jared Goff #16 throws a pass during the second half against the Buffalo Bills at Bills Stadium on September 27, 2020 in Orchard Park, New York. Bills beat the Rams 35 to 32. (Photo by Timothy T Ludwig/Getty Images) NFL Week 4 Waiver Wire Pickups

We told you last week to add Jared Goff and apparently not everyone listened. He is still only owned on 37.5% of ESPN rosters which is ridiculously low. Goff finished 22 of 32 for 321 yards with 2 touchdowns and an interception. It was Goff’s third straight solid performance, excelling in play action. Goff has to start making more plays on conventional drop backs, but for now, play action is working. He will be in the low-end QB1 mix for Week 5 against the pathetic Giants.

Nick Foles completed 16 of 29 passes for 188 yards with three touchdowns and an interception in a 30-26 Week 3 win over the Falcons. Foles simply made plays and read the defense in a way that Mitchell Trubisky failed to in the first half. The final touchdown was a beautifully lofted ball over the middle of the field to Anthony Miller with pressure in Foles’ face. Foles is light years ahead of Trubisky when it comes to running Matt Nagy’s offense. It would be shocking to see Chicago go back to Trubisky in Week 4 against the Colts, making Nick Foles a great NFL Week 4 Waiver Wire Pickups.

Ryan Fitzpatrick completed 18 of his 20 passes for 160 yards and two touchdowns in the Dolphins’ 31-13, Week 3 win over the Jaguars, adding seven rushes for 38 yards and a touchdown. Fitzpatrick carved up the Jaguars in the first half, finishing the half 12 of 14 for 127 yards and his two passing scores. He was required to do much in the second half with the lead but he did add his one yard rushing touchdown. FitzMagic’s 25.2 Fantasy Points should land him in the top-10 in Week 3, and he has a shot at another top-12 finish in Week 4 against a Seahawks pass defense that has given up 87.96 fantasy points to opposing quarterbacks thru 3 games this season.

We spent the offseason debating who the back to own in Miami was, Jordan Howard or Matt Brieda. The real answer is Myles Gaskin. Gaskin rushed 22 times for 66 yards in the Dolphins’ Week 3 win over the Jaguars, adding five receptions for 29 additional yards. Gaskin did need 27 touches for his 95 yards, but the positive is the 26 touches. Gaskin will be a viable FLEX option for next week’s potential shootout with the Seahawks, and if they ever give him the gaol line work could sneak into the RB2 conversation.

Another player we mentioned last week is Joshua Kelley. Kelley is on the verge of ownership percentages to be permitted into this article and truth be told he shouldn’t be. The reason I have to include him despite his ownership, is the distinct possibility that he is still available in you league. Joshua Kelley is a must own RB. Sunday wasn’t a huge day, but he is still involved in this Chargers offense. He turned 10 targets into 52 total yards. Kelley fell victim to game script as the Chargers surprisingly chased points in this one.

Rex Burkhead rushed six times for 49 yards and two touchdowns in the Patriots’ Week 3 win over the Raiders, adding seven catches for 49 additional yards and a third touchdown on 10 targets. The three scores were the first ones of the season for Burkhead, who has emerged as the Patriots’ top playmaking back over the last couple weeks. Burkhead looks like the best bet for fantasy success in New England’s backfield, but there’s a good chance this is an outlier outing. Burkhead will be an RB3 for Week 4 against the Chiefs, and worth a NFL Week 4 Waiver Wire Pickups.

PHILADELPHIA, PA – SEPTEMBER 27: Greg Ward #84 of the Philadelphia Eagles runs in for a touchdown after a pass reception against the Cincinnati Bengals in the second quarter at Lincoln Financial Field on September 27, 2020 in Philadelphia, Pennsylvania. (Photo by Mitchell Leff/Getty Images) NFL Week 4 Waiver Wire Pickups.

When the Eagles run out of pass catchers, they turn to Greg Ward Jr. It happened towards the tail end of 2019, and it happened again on Sunday. In Week’s 14-16 a season ago, Ward was WR27 with 38.1 PPR points. On Sunday Greg Ward caught 8 of his 11 targets for 72 yards and a touchdown in the Eagles’ Week 3 tie with the Bengals. Ward was forced to take on a bigger role for the Eagles with Dallas Goedert (ankle) and DeSean Jackson (hamstring) both going down in the first half.

His 11 targets led the Eagles as did his 72 receiving yards. He walked in for an easy score after the Cincinnati secondary forgot to cover him over the top on a play. If the Eagles’ weapons miss time and Alshon Jeffrey (foot) remain sidelined, Ward will be an intriguing flex option that will be a solid NFL Week 4 Waiver Wire Pickups.

Justin Jefferson caught 7-of-9 targets for 175 yards and one touchdown in the Vikings’ Week 3 loss to the Titans.
Jefferson entered this one with five catches for 70 yards on six targets. There was talk all week, that the Vikings wanted to get the rookie more involved against Tennessee. Jefferson had over 100 yards at halftime and then roasted the Tennessee secondary for a 71-yard touchdown in the third quarter. His nine targets led the Vikings. Jefferson is suddenly very much worth rostering in 12-team leagues and a solid NFL Week 4 Waiver Wire Pickups.

With Arizona WR Christian Kirk ruled out, Arizona figured to get second year WR Andy Isabella more involved. More involved was exactly what he was. Isabella finished this one catching all four of his targets for 47 yards and a pair of touchdowns. The two touchdowns double his rookie season total of one. In four wide receiver sets in Arizona Isabella has some flex value especially if Kirk misses time.

We mentioned Alie-Cox last week as well. Based on his ownership percentages we are guessing that you thought we were joking. Well we were serious last week and remain serous. Mo Alie-Cox remains a must own TE, go get him now. Cox caught all three of his targets for 50 yards and a touchdown. In the last two weeks he has totaled 8 catches for 161 yards and a touchdown.

Gronk tried to sell us the he was brought to Tampa to block. I wasn’t buying it then and I am not buying it now. Gronkowski hauled in 6 of his 7 targets for 48 yards, and out-targeted O.J. Howard 7 to 4. It’s possible that Gronk needed a few weeks to kick the rust off. He is worth a speculative add if available in your league.

Tyler Kroft caught 4-of-5 targets for 24 yards and two touchdowns in the Bills’ Week 3 win over the Rams.
Three of Josh Allen’s four passing scores went to tight ends in this one. If Dawson Knox (concussion) is to miss extended time, Kroft offers some plug and play TE upside.