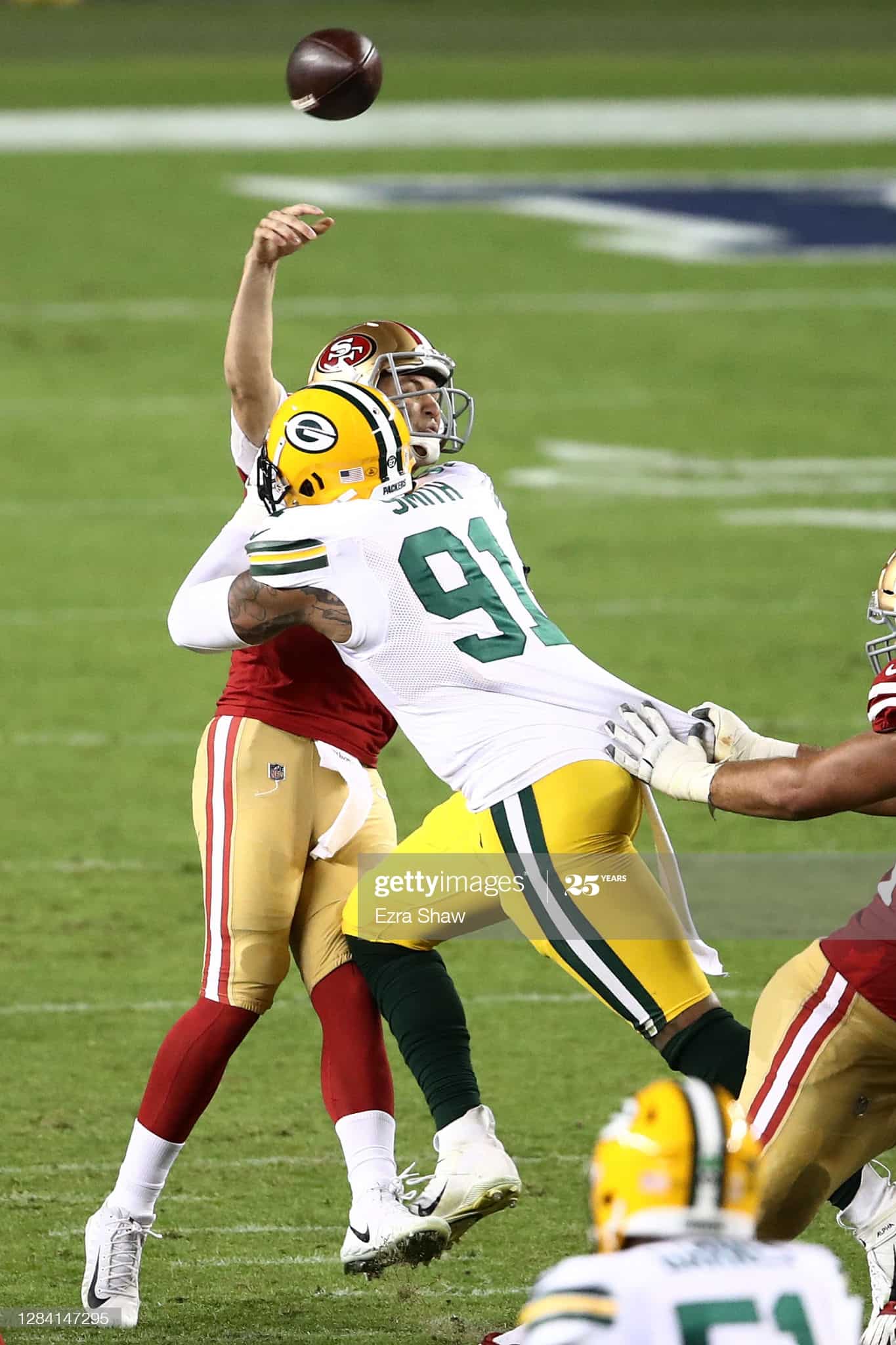 With the regular season winding down or playoffs starting in your leagues, this is not the time of the year to get fancy with your sit and starts. That said, 2020 has been the most challenging fantasy football year I can remember and that will likely continue the rest of the year. Injuries continue to pile up at what feels like a faster than normal pace, and many teams will need to find guys they normally wouldn’t consider starting to fill spots. People going on and coming off the COVID list, and three week IR, is hard to keep up with but we have dug into it for you and here are our NFL Week 14 IDP Waiver Wire Adds!

*Please note: Players listed are in no particular order for waiver preference.
**Originally published the late morning of 12/07/2020, before the two Monday and one Tuesday games were played.

EAST RUTHERFORD, NEW JERSEY – OCTOBER 18: Tae Crowder #48 of the New York Giants returns a fumble by Kyle Allen #8 of the Washington Football Team for a touchdown to take the lead in the fourth quarter of their NFL game at MetLife Stadium on October 18, 2020 in East Rutherford, New Jersey. (Photo by Al Bello/Getty Images)

This is predicated on if Eric Kendricks does not play again in Week 14, after being a late scratch in Week 13. I wouldn’t add him from waivers, but keep and eye on Kendricks and look to add Davis later in the Week if it looks like Kendricks may miss Week 14. Davis played 100% of the snaps in Week 13 and had 3 solos and 8 assists.

Davis has the ability to get your fantasy points, as he was our LB 35 last year as a starter in the 14 games be played for the Broncos. He ended that year with 78 solos, 56 assists, 6 TFL and 1 PD, so he isn’t a big play guy, but he will get you tackles like he did in Week 13.

Here is another contingent pick-up, but that’s where we find ourselves with this year, and this time of year. Kyzir White is eligible to come off the COVID list for this next week, but it is unclear if he will play. After being injured in the game against Buffalo in Week 11, Denzel Perryman missed Week 12 and Week 13 after being doubtful all week. This suggests he at least isn’t likely to play Week 14. Enter Sandman…I mean Nick Vigil.

In Week 12 he had 6 solos, 2 assists, a forced fumble and a PD. In Week 13 he has 3 solos, 6 assists and 1 TFL. Week 14 brings the Falcons who don’t give up a ton of points to opposing linebackers (7th fewest), but if Vigil plays and you are looking for a “free.99” option, Vigil could be a nice late week pick-up, once we know the statuses of White and Perryman.

Ah yes, 2020’s Mr. Irrelevant. Crowder was one of Paul’s discount bin pick-up and see players in our “Underrated IDP Players in 2020“. He’s played in 6 games through the end of Week 13, so I’m not sure he counts as a hit, but he’s done alright when he’s played, so it’s not a clear miss either.

Starting Giants middle linebacker Blake Martinez exited the Week 13 game against Seattle with a back injury,and given his injury history I’d say there’s better than a 50/50 chance he misses Week 14.Crowder ended Week 13 (his second game back from injury himself) with a 54% snap share, 6 solos, 1 assist and 1 TFL.

All of this combined gets me to believe that Crowder is likely to play even more in Week 14. Crowder has some “get to the QB ability”, and with a clearly not 100% Kyler Murray facing the somehow-trying-to-win-the-division Giants in Week 14, I like him as a Week 14, and could have value going forward depending how he shows.

In the past four games Preston has 75.5% snap share with 12 solos, 5 assists, 5 TFL, 2.5 sacks, 1 forced fumble and TD. That’s equals a nice 12.25 points/game with our scoring, and much of that was before Packers defensive leaders (including Preston) spoke with defensive coordinator Mike Pettine last week about keeping the pressure up when ahead late in games. The Packers defense keeping the foot on the pedal, so to speak, when up late in games bodes well for Smith to continue his play going forward.

NEW ORLEANS, LOUISIANA – OCTOBER 12: Nasir Adderley #24 of the Los Angeles Chargers makes an interception on a pass intended for Bennie Fowler #16 of the New Orleans Saints during their NFL game at Mercedes-Benz Superdome on October 12, 2020 in New Orleans, Louisiana. (Photo by Chris Graythen/Getty Images)

The Chargers safeties have two great match-ups to end the year (Atlanta in Week 14 and Denver in Week 16 are 1st and 2nd, respectively, in points allowed to opposing safeties) and two duds (Las Vegas [27th] in Week 15 and Kansas City [32nd] in Week 17). From Week 4 on Adderley has had a 100% snap share, and during that time has averaged about 4 solos and 1 assist a week.

He’s not a great start any week, but I would be comfortable playing him in Weeks 14 and 16 if I had to, as from Week 8 on he has missed out on having at least 6 points in only 1 week.

Jones was on our list earlier this year, but Weeks 10, 11 and 12 was on the IR return list. In his first game back Week 13 he had a 100% snap share and ended with 7 solos and 3 assists. Like Adderley above, Jones has two great match-ups to end the year: Week 16 is against Chicago, who give up the 4th most points to opposing safeties, and Week 17 is against Indianapolis, who give up the 5th most. Yes I know, most leagues don’t play Week 17, but if yours does and you need a safety for some reason, he’s a nice look ahead add.

Since Week 3 Diggs has missed out on 100% snap share in only 1 game (when he was at 99%), so he is clearly seeing the field. He’s had an interception each of the last two weeks which you can’t count on every week of course, but he’s getting his couple tackles each week with that and has nice match-ups against the New York Jets, Washington, Los Angeles Rams and San Francisco to close out the year. I like him more if you are able to start him as a cornerback, but if you want to look for a decent floor spot starter, he is averaging about 5.50 points a game and the last time he was under 3 points with our scoring was Week 2.

Since coming off IR in Week 11, Chidobe has had a 99.5% snap share and has had 11 solos, 4 assists and 1 PD. Week 14 brings the Bengals, who give up the most points to opposing cornerbacks on the year. He’s a great Week 14 play in CB required leagues.

FOXBOROUGH, MASSACHUSETTS – SEPTEMBER 27: Cam Newton #1 of the New England Patriots avoids a tackle by Clelin Ferrell #96 of the Las Vegas Raiders during the first half at Gillette Stadium on September 27, 2020 in Foxborough, Massachusetts. (Photo by Adam Glanzman/Getty Images)

Since Week 5, Smoot has been under a 54% snap share only once and has done alright in that time: 4.5 sacks, 9 solos, 4 assists and 4 TFL. His past two games have been some of his best this year, and while his match-ups aren’t great the rest of the year (Tennessee is 18th, Baltimore is 14th, Chicago is 26th and Indianapolis is 29th in points given to opposing defensive ends) he’s a decent pick-up and dart throw play if you need one.

High on talent and low on production throughout young his career, Ferrell had his best game of the year in Week 13: a 84% snap share, 4 solos, 2 assists, 1 PD, 2 forced fumbles and 2 sacks. While that statistics haven’t been there, he has been one of PFF’s highest rated EDGE rushers this year.

Clelin should still be owned in dynasty leagues, as he was the number 4 pick out of Clemson in 2019, but if he was dropped due to a lack of fantasy statistic-worthy plays, or you are in a redraft league, he is definitely worth an add. Three of the four teams he faces the rest of the year ( Chargers in Week 15, Dolphins in Week 16 and Broncos in Week 17) are all in the top half of the league in terms of points allowed to opposing defensive ends.

A blast from the past! An IDP teams were familiar with starting 2011, Sheard joined the Giants in mid October. He hasn’t gone over a 57% snap share (which he had Week 13), but with the Giants injuries he has been playing more the past two weeks and doing fine for a fantasy fill in player. Week 12 he has 2 solos, 1 assist, 1 sack, 1 forced fumble and 1 TFL. Week 13 was similar with 3 solos, 1 assist and .5 sack.

As mentioned when discussing Crowder earlier, the Cardinals are giving up pressure and Murray is not healthy. I would not want to start Sheard as a LB, but he is a DE in most leagues, and if you are looking for a cheap fill in, he gets Arizona, Cleveland, Baltimore and Dallas the rest of the season, which is a nice schedule for a defensive end.

This is more of a “rest of the season/and maybe beyond” type add, as Week 14 is not a great match-up (the Chiefs are in the bottom 5 for points allowed to opposing defensive tackles). The rest of the season is much nice, as from Week 15 on the Dolphins face New England (11th most allowed), Las Vegas (2nd most) and Buffalo (17th most).

RotoHeat’s newest IDP contributor, Randy Johnson, wrote about him here so I won’t reiterate it all here, go read his article, but Sieler has been having a decent year, and has improved as the year went on. I really like him in leagues where he is defensive tackle (DT) or Interior Line (IL) eligible, but as Randy states, he’s worth a look at adding in leagues where he is a defensive end as well.

You catch NFL Week 14 Offensive Waiver Wire Adds and all our other video content on YouTube. Be sure to subscribe and click the notification bell to ensure that you don’t miss any of our other great content. We have free IDP Rankings over on RotoHeat.com, and you can catch our IDP-Specific podcast on most podcatchers! You can also find me on Twitter.

Dynasty Battles: Darren Waller or Mark Andrews in 2021 and Beyond?