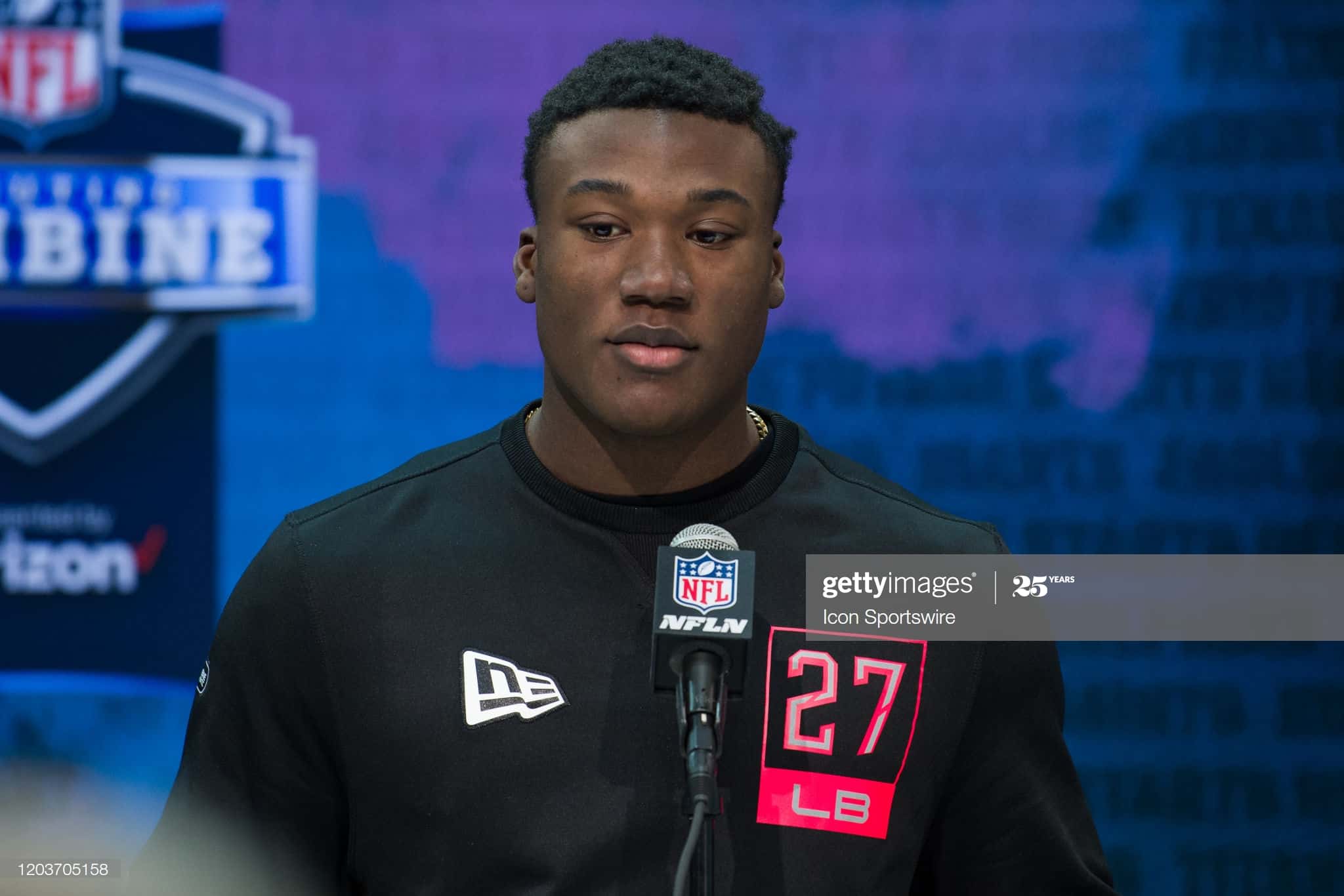 As a three star recruit out of Texas, Kenneth Murray had offers from schools such as California, Houston, and Baylor before deciding on Oklahoma. His freshman year he played in 13 games, getting 68 tackles (36 solo, 7 for a loss) with one sack, one fumble forced and one recovered.

The next two years he played in 13 and 14 games, averaging 128.5 tackles (70 solo and 15 tackles for a loss), 4 sacks and 3 passes defensed, and he declared for the 2020 NFL Draft after a junior year in which he was named to the All-Big 12 First Team (statistics courtesy of Sports Reference).

The Los Angeles Chargers traded a second and a third round pick to the New England Patriots to move back into the first round at the 23rd pick and select Murray after taking Justin Herbert at pick six. He was a Freshman All-American and the co-Big 12 Defensive Freshman of the Year after amassing 68 total tackles (36 solo, seven for a loss), one sack, one forced and one recovered fumble.

Murray should start right away as a rookie, and if he does start the whole year, he has LB1 upside right out of the gate. This may seem a bit of a reach, but Devin Bush accomplished the same thing just one year ago. I am not expecting to have an LB1 right out the gate if I am taking Murray in rookie drafts this year, but if he starts I am certainly expecting LB2 numbers, with clear potential for even better results.

Similar to his rookie year potential, Kenneth Murray has long term LB1 potential. Linval Joseph, Jerry Tillery, Joey Bosa and Melvin Ingram make an above average 4-3 defensive line in front of him, and currently there is not much else (in terms of top end talent) around him at linebacker. Nick Vigil, Denzel Perryman, Drue Tranquill, Malik Jefferson and Kyzir White are players many IDP owners will have had an unsatisfactory cup of tea with. Uchenna Nwosu is another promising younger player, but has shown little his first two years.

Given the draft capital, it would appear the Chargers see Murray as their middle linebacker of the future and a cure for their recent linebacking inconsistencies. I feel the same way, as there is nothing that Murray can’t do on the field. He is a superb tackler, can rush the passer, and is great in coverage, which is vital in today’s NFL.

Like any rookie, he will have to adapt to NFL game speed, and this may take a while. In college he was slow to react to plays at times. I did not see this as a consistent issue though, and I believe he will be fine once he gets his feet wet in NFL games.

Similar to what we discussed in our Patrick Queen article, in a league with scoring like the RotoHeat IDP Scoring you will likely need to use a mid-to-late second round pick to acquire Murray. He was a top two linebacker before the draft, and he has maintained that value with his landing spot. This year we have seen the top-end IDPs fall more to the mid and late second than normal, but an owner that needs a linebacker could very well still take him in the early 2nd, given his potential and landing spot, and I wouldn’t bat a eye at it.

Let us know what you think about Kenneth Murray, as we have him currently as the #2 overall rookie IDP and #1 rookie linebacker in our FREE IDP Rookie Rankings. You can catch our IDP-Specific Live Stream Monday Nights @ 9:30 Eastern over on YouTube! You can also find me over on Twitter!