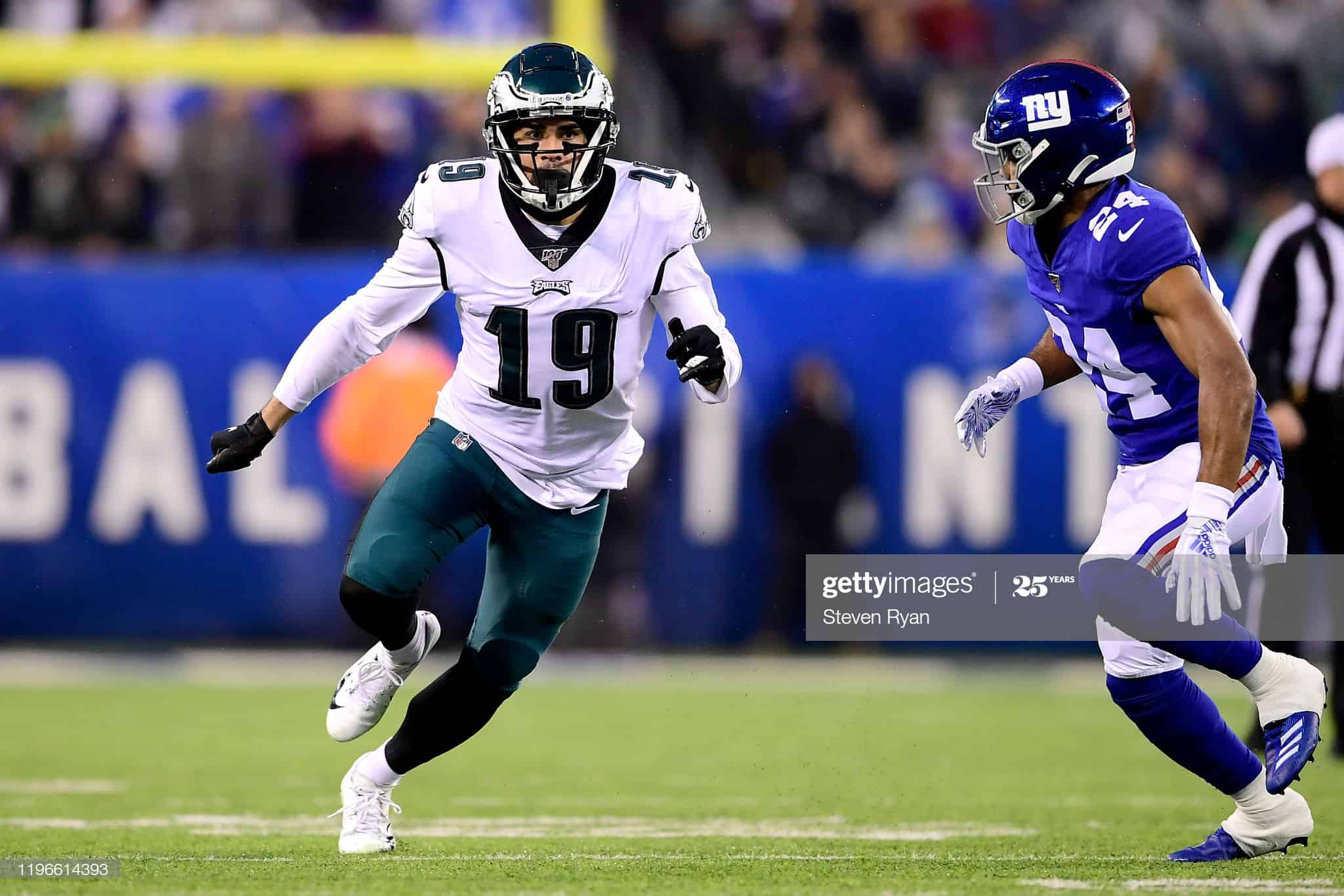 J.J. Arcega-Whiteside was selected by the Philadelphia Eagles in the second round of the 2019 NFL Draft with the 57th overall pick. He was the 5th wide receiver to come off the board. In 33 games at Stanford, Arcega-Whiteside totaled 135 receptions, 2,219 yards and 28 touchdowns.

Coming out of Stanford, JJAW was described as a big, strong target who plays like he’s big and strong and gets more and more dangerous the closer he gets to the red zone. His quickness is likely not enough to get away from tight coverage, and he won’t run by many NFL cornerbacks on go routes. He has above average body control and ball skills to excel at combat catches and back-shoulder throws. Arcega-Whiteside may not be explosive, but his competitive nature should help make him a future NFL starter.

Since 2012, there have been 40 wide receivers selected in the second round of the NFL draft. Of those 40, 10 have recorded 50 points or less in their rookie season. Of those 10, JJAW and Rueben Randle were the only two that did not miss any games due to injury in their first season. The 32.9 points that Arcega-Whiteside recorded were the 4th lowest, and the lowest of all to play a full season. The average 2nd round rookie scored 96.8 points in their inaugural season.

It was a common opinion that Arcega-Whiteside would have a slow start to his career, and that once the Eagles moved on from Alshon Jeffery, JJAW would slide into the #1 role as a pass catcher. After what we saw in 2019, I am no longer certain that opinion is common at all. The Eagles pass catchers were devastated by injury last season and JJAW never took advantage. In weeks 15-17 the Eagles played without Alshon Jeffery, Nelson Agholor, and DeSean Jackson. In week 16 they were also missing Zach Ertz. In those three games combined, JJAW saw 4 of the Eagles 123 targets and had 2 receptions for 39 yards.

It’s one thing for a rookie WR to struggle, but it’s entirely another when given a golden opportunity only to be outplayed by Greg Ward, and Deontay Burnett–one is a converted quarterback and the other is on his fourth team in two seasons, while both were undrafted free agents.

Entering the 2020 season I would expect JJAW to improve solely because it’s quite difficult for him not to. I would also expect that the Eagles use a high draft pick on a WR in this deep receiver class. Currently JJAW is listed as the 4th WR on the Eagles depth chart, and that doesn’t include the pass catching of Zach Ertz, Dallas Goedert and Miles Sanders.

Entering his rookie season, the ceiling for JJAW appeared to be a career WR2 for his organization. Entering 2020, I wouldn’t expect him to be relevant for fantasy purposes.

My opinion of J.J. Arcega-Whiteside will change if he manages to be relevant in the Eagles offense in 2020. As it sits now, I struggle to see that happening and as a result I wouldn’t look for much to change in his third season. The dynasty community looks for young wide receivers to break out in their third season, recognizing that transitioning from the college game to the NFL takes time. Typically those that breakout show significant growth from a decent rookie season during their second season and then take that leap in year three.

JJAW to this point has had a disaster of a rookie season and will enter his second season buried on the depth chart. It is going to be very difficult for him to see the volume that he will need in 2020 to excel and near impossible to project a breakout in 2021 and beyond.

I have Arcega-Whiteside ranked as my WR74. To put that into perspective, I have 14 wide receivers in the 2020 draft class ranked ahead of him. Selling this WR is not going to bring you a positive return on your investment. When drafting him in 2019, you likely spent a late first to early second round pick on him in your rookie drafts. Today you will be lucky to get a late second/early third round pick in return.