Home Redraft Five Up and Five Down Week 2 Recap 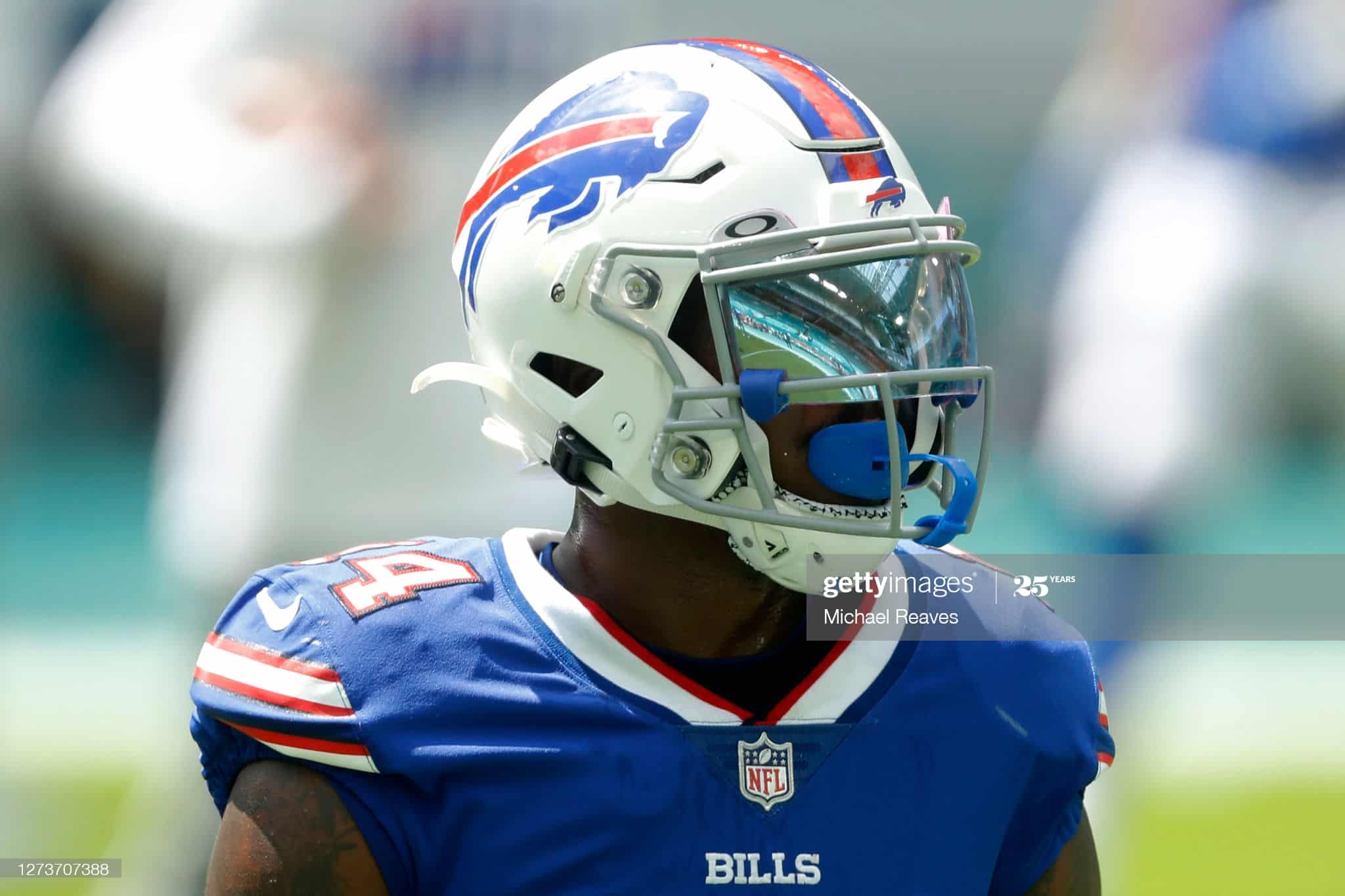 Five Up & Five Down Week 2 Recap

Injuries played a huge role in the outcome of fantasy production in Week 2. Simply put the week was a disaster, with more injuries to top fantasy assets in any week I have ever witnessed. With that said we did have some excellent weeks from some, and some horrible weeks from others.

GREEN BAY, WISCONSIN – SEPTEMBER 20: Aaron Jones #33 of the Green Bay Packers scores a touchdown in the third quarter against the Detroit Lions at Lambeau Field on September 20, 2020 in Green Bay, Wisconsin. (Photo by Dylan Buell/Getty Images) Five Up and Five Down Week 2 Recap

Aaron Jones was at it again this past Sunday. The 2019 second highest scoring fantasy RB, reminded all those that have doubted him (that would be me),why he finished as high as he did a year ago. Jones rushed 18 times for 168 yards and two touchdowns and caught 4-of-8 targets for 68 yards and a score in the Packers’ Week 2 win over the Lions. His day was highlighted by his 75-yard touchdown run, his second of the day.

Aaron Jones excelled in the Packers offense a year ago during WR Davante Adams’ absence. Adams is questionable for week three down in New Orleans. After seeing what the Raiders did to the Saints defense, its likely that Jones is in line for another big fantasy week yet again.

TAMPA, FLORIDA – SEPTEMBER 20: Leonard Fournette #28 of the Tampa Bay Buccaneers warms up before the game against the Carolina Panthers at Raymond James Stadium on September 20, 2020 in Tampa, Florida. (Photo by Mike Ehrmann/Getty Images) Five Up and Five Down Week 2 Recap

In Week 1, Leonard Fournette played a total of 9 snaps compared to 33 for Ronald Jones and 25 for LeSean McCoy. Entering Week 2, Rojo figured to maintain his role as the Bucs lead back with Fournette’s role likely to increase but remain the in a supporting role. After a Rojo fumble, Fournette took over, out-touching Jones 16-9. Leonard Fournette’s day ended with 103 rushing yards and two touchdowns, adding four catches for 13 yards. Producing once getting the opportunity should see Fournette as the team’s lead back vs. the Denver Broncos in Week 3.

INGLEWOOD, CALIFORNIA – SEPTEMBER 20: Justin Herbert #10 of the Los Angeles Chargers rolls out during a 23-20 loss to the Kansas City Chiefs at SoFi Stadium on September 20, 2020 in Inglewood, California. (Photo by Harry How/Getty Images) Five Up and Five Down Week 2 Recap

The biggest surprise of the day, was Los Angles Chargers rookie QB Justin Herbert. First it was the surprise last minute scratch of starting QB Tyrod Taylor, and insertion into the offense of Herbert. Then he surprised us with his performance. He completed 22-of-33 passes for 311 yards, one touchdown, and one interception in the Chargers’ Week 2 overtime loss to the Chiefs, adding 18 yards and a score as a rusher. Despite Head Coach Anthony Lynn’s comments, Herbert starting going forward is in the best interest of the Chargers, and Lynn’s job security.

SEATTLE, WASHINGTON – SEPTEMBER 20: Julian Edelman #11 of the New England Patriots reacts after an illegal contact penalty by Ugo Amadi #28 of the Seattle Seahawks during the fourth quarter at CenturyLink Field on September 20, 2020 in Seattle, Washington. (Photo by Abbie Parr/Getty Images) Five Up and Five Down Week 2 Recap

When the New England Patriots made the transition to QB Cam Newton from Tom Brady, the Pats figured to be on of the heaviest running teams in the NFL. In week 1 New England ran 42 times compared to 19 pass attempts. Entering a Week two match-up against the Seattle Seahawks the expectation was for a similar offensive approach. Chasing points the Patriots were forced to abandoned the run.

The biggest benefactor was Julian Edelman. Edelman caught 8-of-11 targets for 179 yards, The receiving yards were a career high. The fact that Julian Edleman in his 11th season set a career high in receiving yards with Cam Newton as his QB and not Tom Brady is stunning. I wouldn’t expect a repeat performance anytime soon. This Sunday the Patriots will plan to run all over the visiting Las Vegas Raiders.

PHILADELPHIA, PENNSYLVANIA – SEPTEMBER 20: Linebacker Nate Gerry #47 of the Philadelphia Eagles tackles running back Darrell Henderson #27 of the Los Angeles Rams in the first quarter at Lincoln Financial Field on September 20, 2020 in Philadelphia, Pennsylvania. (Photo by Rob Carr/Getty Images) Five Up and Five Down Week 2 Recap

Darrell Henderson rushed 12 times for 81 yards and a touchdown in the Rams’ Week 2 win over the Eagles, adding two receptions for 40 additional yards. Henderson ended up leading the Rams’ backfield in touches after Cam Akers departed early with a rib injury. Malcolm Brown was apparently also limited late by a finger issue. After struggling to get on the field last season, Henderson looked dangerous on Sunday. He offered far more play-making ability than Brown, whom he out-touched 14-11 and out-gained 121-47. With Akers’ status uncertain, there is now a strong chance Henderson will lead the Rams’ Week 3 committee. The match-up versus Buffalo is not ideal though. Henderson should be considered for a start in your flex spot this week.

ARLINGTON, TEXAS – SEPTEMBER 20: Matt Ryan #2 of the Atlanta Falcons looks for an open receiver against the Dallas Cowboys in the second half at AT&T Stadium on September 20, 2020 in Arlington, Texas. (Photo by Tom Pennington/Getty Images) Five Up & Five Down Week 2 Recap

The expectation for the Dallas Cowboys and the Atlanta Falcons game to be a shootout cam to fruition. What did not go as expected was the results from Julio Jones. Julio was only targeted 4 times, and caught 2 for just 24 yards. His four targets were a distant fourth on the team. His day could have been salvaged had Jones not dropped a sure 42-yard touchdown on a perfect wildcat throw from WR Russell Gage. Jones will look to rebound as a WR1 next week against Chicago if he indeed plays. Falcons OC Dirk Koetter believes there’s more to Julio Jones’ hamstring injury than he led on. Jones owners need to have a plan B in place just in case.

After two straight disappointing weeks, Sony Michel owners are concerned and rightfully so. Sony Michel had seven carries for 19 yards in Week 2 against Seattle. A week prior versus Miami, he totaled 37 yards on 10 carries. Michel stumbled out of the gate against the Seahawks and the Patriots later abandoned the run game altogether chasing points. Also working against Michel is the fact that it would appear that all the goal line work is going to QB Cam Newton. Entering Week 3 he is averaging 2.9 yards per carry. He has a nice match-up at home vs. LAs Vegas this week, and game script should play in his favor here.

INDIANAPOLIS, IN – SEPTEMBER 20: Kirk Cousins #8 of the Minnesota Vikings reacts after throwing an incomplete pass during the first quarter against the Indianapolis Colts at Lucas Oil Stadium on September 20, 2020 in Indianapolis, Indiana. (Photo by Bobby Ellis/Getty Images) Five Up & Five Down Week 2 Recap

In Week 2, Kirk Cousins totaled 1.52 fantasy points. That is not a typo, there is no missing digit there. Cousins completed 11 of his 26 passes for 113 yards, no touchdowns and three interceptions. Kirk must have thought this game was in Primetime. In addition Cousins also took an inexcusable safety where he held onto the ball far too long. The Vikings’ are a mess. They have run a league low offense 106 plays thru two weeks, they are the 32nd ranked passing offense and the 20th ranked rushing offense. Cousins is off the radar in 1QB leagues until further notice and if you have a better option in 2QB or Super-Flex leagues I would recommend you take it.

CHICAGO, IL – SEPTEMBER 20: Chicago Bears wide receiver Anthony Miller (17) looks on in action during a game between the Chicago Bears and the New York Giants on September 20, 2020 at Soldier Field in Chicago, IL. (Photo by Robin Alam/Icon Sportswire via Getty Images) Five Up & Five Down Week 2 Recap

Anthony Miller was on the field for 26 of the Bears’ offensive snaps in Week two (40%). Allen Robinson (53), Darnell Mooney (39), Javon Wims (31), all played more. Something isn’t right in Chicago. Miller should be this team’s #2WR and he is barley the #3 thru two weeks. He was targeted 3 times against the Giants coming down with none of them. Miller Miller is bordering on droppable in 12-team leagues ahead of Week 3 against the Falcons. If he can’t get it done against a Falcons defense that has allowed 749 passing yards in two weeks.

TAMPA, FLORIDA – DECEMBER 21: Will Fuller #15 of the Houston Texans looks on during warmup before a game against the Tampa Bay Buccaneers at Raymond James Stadium on December 21, 2019 in Tampa, Florida. (Photo by Julio Aguilar/Getty Images) Five Up & Five Down Week 2 Recap

After an impressive week one, Will Fuller appeared to be the preferred target of QB Deshaun Watson, and as a result the top WR on the Houston Texans. Fuller’s talent and upside is undeniable, its his inability to stay healthy that has always hurt him. Fuller gave his fantasy manager’s a donut in Week two, a week after a 19.20 PPR point opening week. He was not on the injury report all week leading up to the game, and he was shown stretching on the sidelines throughout the first half. He did try to return in the third quarter, but was constantly taken in and out of Houston’s lineup. He ended the game without a target.

Thank you for reading Five Up and Five Down Week 2 Recap.