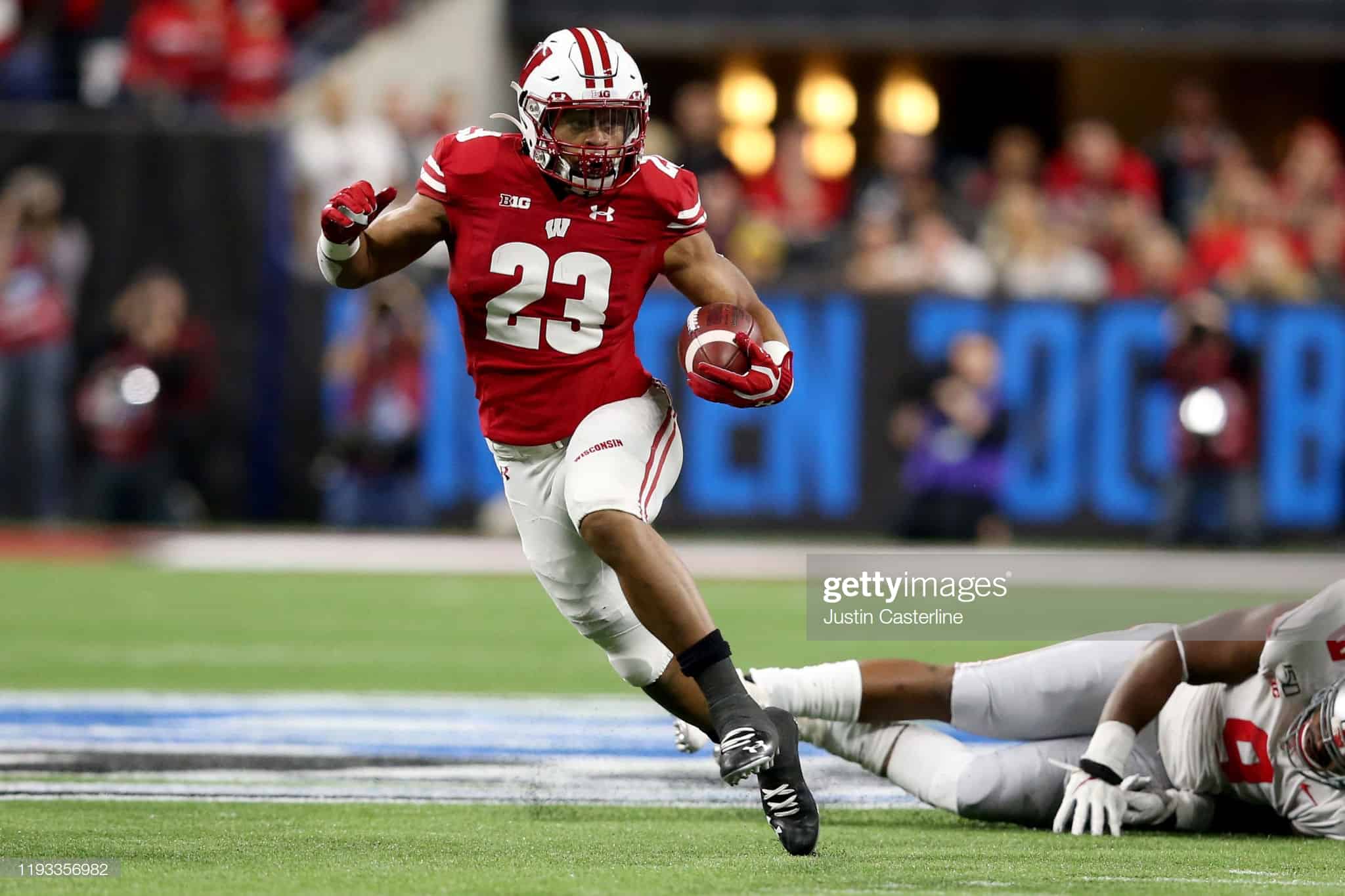 In this installment of this 8-part series we review the Fantasy Draft Grades in the AFC South.

BERKELEY, CALIFORNIA – NOVEMBER 16: Michael Pittman Jr. #6 of the USC Trojans catches a touchdown pass over Elijah Hicks #3 of the California Golden Bears during the second quarter of an NCAA football game at California Memorial Stadium on November 16, 2019 in Berkeley, California. (Photo by Thearon W. Henderson/Getty Images)

The Colts drafted one of the RotoHeat team’s favorite rookie wide receivers in Michael Pittman Jr. from USC with their first pick in the draft. The #13 ranked player in the RotoHeat 1QB rankings, Pittman brings something the Colts were lacking in their offense last year–a big outside receiver that can double as a red-zone threat. Phillip Rivers should quickly love his rookie weapon who, with TY Hilton and Parris Campbell, are quickly making a receiving core to rival the best in the NFL.

Jonathan Taylor should quickly take over the reins as the top running back in Indy, even with Marlon Mack and Nyheim Hines already on the roster. I’d project him in the 750-900 rushing yards and probably 5-8 touchdowns as a rookie. That could go up if they use him as a pass-catcher as well, though I anticipate there still being a big role for Marlon Mack on this team.

In SuperFlex drafts, I am aiming to stash Jacob Eason as a long-term prospect. The 4th rounder learning from Rivers for at least a year could be huge. He brings a big arm, and the ability to make all the throws to a team that was looking for their franchise quarterback. Their last offensive skill position pick came from 6th rounder Dezmon Patmon, who could be a fine depth player but nothing terribly exciting for fantasy purposes.

From an IDP perspective, there isn’t much to like about this draft class, other than Julian Blackmon, the safety from Utah. Rumors are the Colts are already looking to move Malik Hooker, and Blackmon could be their long-term option to replace him when that move happens. Blackmon is still a player I’m not touching in combined offensive/defensive rookie drafts until the 4th or 5th round. Adding him to your taxi squad could provide big dividends in the end.

BOULDER, CO – OCTOBER 25: Laviska Shenault Jr. #2 of the Colorado Buffaloes carries the ball for a 73-yard touchdown catch against the USC Trojans in the third quarter of a game at Folsom Field on October 25, 2019 in Boulder, Colorado. (Photo by Dustin Bradford/Getty Images)

The Jaguars came into the draft with a lot of draft capital, and I think they made some solid but not spectacular moves. From the offensive fantasy perspective, Laviska Shenault, if healthy, will be a huge long-term piece that I’m taking early in the 2nd round in 1QB and mid 2nd in Superflex drafts. He brings a well-rounded skill set and will pair nicely with returning starter DJ Chark.

From an IDP perspective, Henderson could be a CB2 in fantasy because of the style of corner he is and how he fits in that young and developing defense. K’Lavon Chaisson will probably be 3rd fiddle to Joe Schobert and Myles Jack, which will limit his value for now as most teams deploy a lot more Nickel packages, keeping only 2 linebackers on the field. The rest of their IDP-relevant draft choices are players I’d let go undrafted, and if they hit you can grab them as waiver-wire options if need be.

All the jokes have been made about the Texans and their unconventional GM trades as of late, and in the end, this class will help the NFL team much more than your fantasy team. Blacklock fills in for DJ Reader, Greenard adds youth to an aging outside linebacker group, and the rest are just “guys”. I’m not touching any of these options in my offensive or defensive fantasy drafts. Nothing more to see here…moving on.

Like the Houston Texans, Tennessee came into this draft and filled needs that really help the NFL team much more than your fantasy team. Darrynton Evans is a nice fantasy pick, as the Titans have been looking for a pass-catching back since they signed (and now released) Dion Lewis. Evans is a guy I’d take a shot on at the back end of round 2, early round 3 at best, because of the depth of this class.

From the IDP Perspective, there isn’t a ton to love about this class, though with the departure of Logan Ryan who finished as a top DB in fantasy last year, Kristian Fulton should be drafted in your combined offensive/defensive rookie drafts. Fulton fits their scheme and should be as athletically gifted as Ryan was. Expect him to be a late 3rd or early 4th round rookie pick.