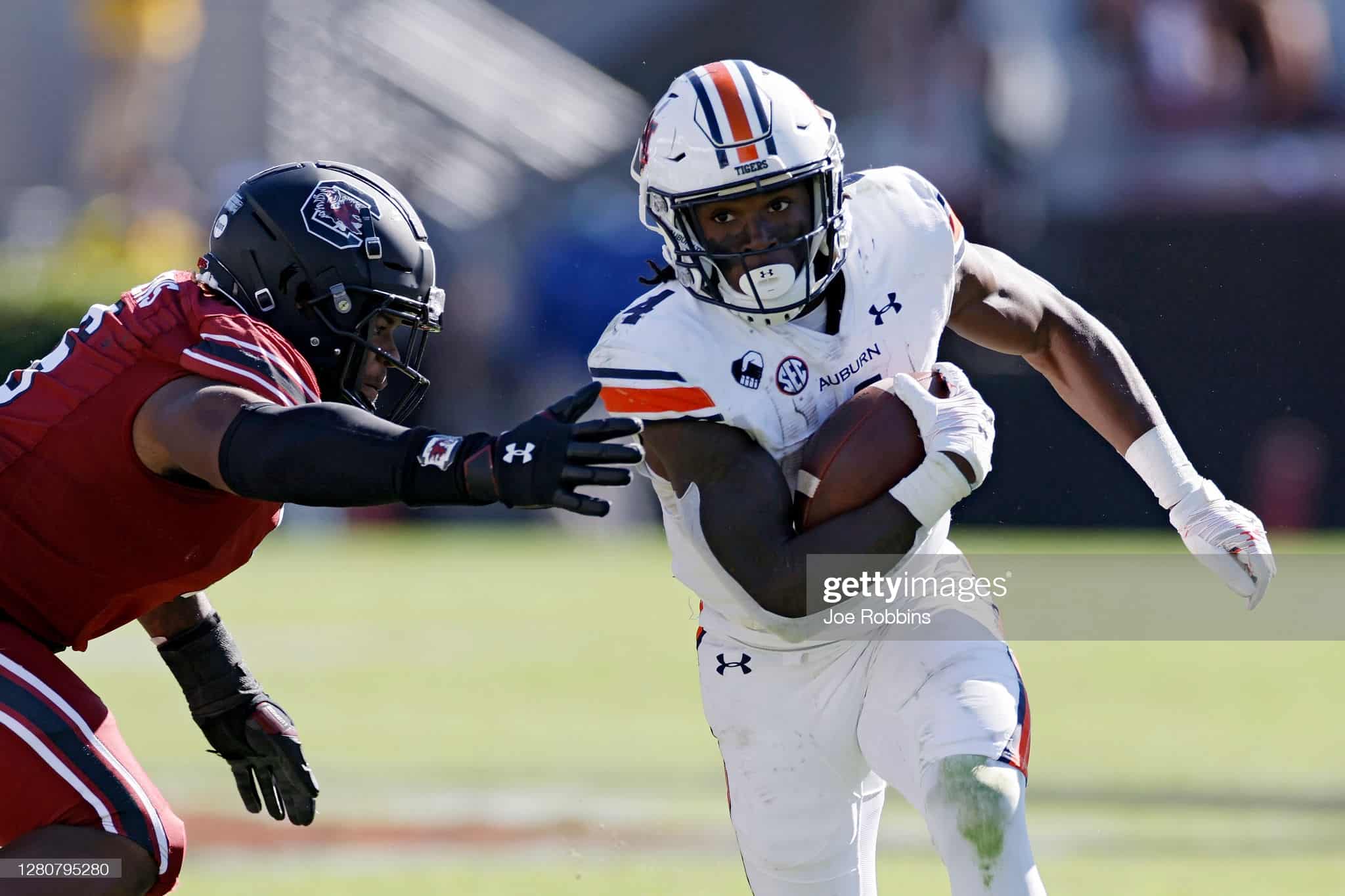 As we wrap-up the 2021 draft season, we begin to turn our attention to the upcoming season. I wanted to take a moment and give you some names to watch as we discuss devy fantasy football running backs that I love. As we near the upcoming college season, these are players that I’m keeping an eye on to see how they’ve developed with another offseason of coaching at the college level.

Bigsby is ridiculously good. Power, speed, and receiving ability is all in Bigsby’s toolbox. As a freshman in the SEC he put out 6 yards per carry and nearly 850 rushing yards. If you haven’t had your devy drafts, I hope you consider him in your top few picks because he can push for being one of the top backs drafted when he gets to the NFL.

White, who was a top back via 247 in the 2018 recruiting class, is dynamic and every bit as good as Bigsby. White has been fairly consistent in terms of per carry average at over 5 ypc. The downside is Georgia hasn’t given him a ton of action in the passing game. 2021 will be a key year for White, and he could be in the conversation for the top of the 2022 draft at the running back position. If your devy team is weaker at the running back position, I would not be afraid to take a flier on Zamir in the top 2-5 picks in your devy draft and feel good about it!

Hall had a monster 2020 campaign with 1,500+ yards and 21 rushing touchdowns to go with 180 receiving yards and 2 touchdowns. He is a thickly built back that has been as dominant at the collegiate level as he was in high school, and is easily in the conversation for the top devy player drafted (while in superflex devy leagues that’s not true).

Robinson didn’t get a ton of action in 2020, logging less than 100 carries but made the most of every opportunity, averaging over 8 ypc for 703 yards and 4 rushing touchdowns as well as 196 receiving yards and 2 receiving touchdowns. Bijan is a solid player at 6’0″, 220+ lbs. He is a great size at the running back position, and does an amazing job at changing direction and going in a hurry. From the devy draft position, I’d feel good seeing him go in the first 2 rounds easily, and expect him to be a day 2 NFL draft pick for sure.

Emery may seem a little high on this list based on such a small sample size in his 2 years at LSU, but I still believe in the talent of the player. Emery is a powerful runner that is extremely dangerous at every level, and though he hasn’t produced yet I still think he can be a huge value and possibly be a top fantasy running back when his time comes!

Ok, so Wheaton hasn’t gotten to Tuscaloosa just, yet but I am a big fan of this young man! You probably don’t need to take him in the first couple rounds of a devy draft because most devy leagues don’t go deep enough where you are taking high school players. I’m just in leagues that do go deep enough! Wheaton has the prototypical running back size/speed combo that today’s NFL loves. Sadly you’ll have to leave him on your devy squad a few years before you see the return on investment, but I believe he’s worth it.

So I have Vaughn here because I wanted to have a more pass-catching focused back on this list, as they have a place in fantasy and can be a big part of your team. Deuce is a much smaller back, at 5’6″ (maybe) and 166 lbs. but he is extremely dynamic with the ball in his hands. Vaughn was a breakout star at Kansas State last year and could very well be the centerpiece of their offense going into 2021, and his running backs coach thinks so too!

This name shouldn’t come as a surprise, as he’s had back to back 1,000+ yard campaigns in 2018 & 2019. With a year off, 2020 has only made him hungrier. Brooks is another one of these backs that has the perfect size/speed for today’s running backs and does a great job of bouncing off tacklers as well as changing direction and being a big play threat at times. There’s not a ton of wear and tear on the tires with less than 300 carries in his 2 seasons and was averaging over 6 yards per carry in both seasons (and actually over 8 yards in one season).

It’s funny to think about, but he could be on the same team as his dad here soon! Gore Jr did a great job in 2020 and the team looks to have him becoming a leader in their locker room. He has big play speed at a slightly smaller size (5’8″ 170 lbs.) but can continue to grow into a potential stud at the next level. Watch his tape against FAU, among other games, because he does a good job breaking off some big plays and gives you a glimpse into what he can be at the NFL level.

Ealy is a really nice back already, and I think with another year of work he can push to be one of the top backs in the class in 2022 if he comes out. He’s got good size and speed like some of the others on this list and adds some strength and shiftiness with the ball in his hands, which can set him apart at the next level.

Thanks for checking out Dynasty Fantasy Football Running Backs!

This list may look in order, and it isn’t necessarily my 1-10, but it is 10 guys that I really like. For more great fantasy football content, subscribe to our website,  YouTube Channel and follow us on Twitter. Be sure to head on over to rookiedraftguide.com for all our rookie player reviews for both 2021 Offensive and Defensive prospect breakdowns. Become a VIP for only $6 to view all eight category rankings, and view the strengths and weaknesses our team has identified for each player.