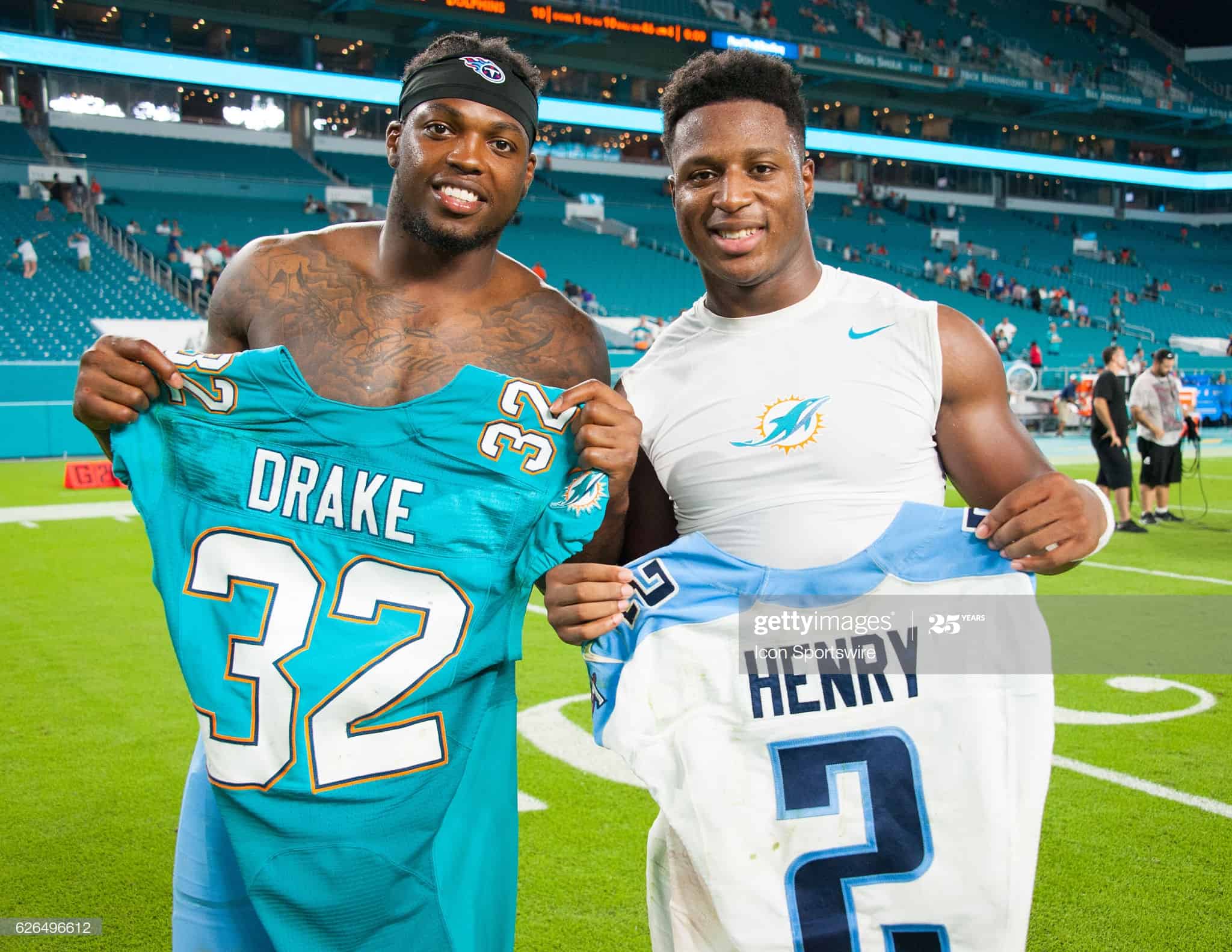 Pick a side: Derrick Henry or Kenyan Drake for Dynasty Fantasy Football? I think most people find this question to be very simple, but I am going to challenge that thinking. For me, it is fairly easy in the opposite direction as the public.

As you can see (this may have updated since posting) in the poll below, Derrick Henry seems to be an overwhelming favorite with some responses of, “Drake voters are very wishful thinkers,” “Has had 5 good games in 3 years,” and “I’m not high at all on Henry…” And don’t forget quality comments like, “Is this a joke?”

On Facebook it was more of the same, with RotoHeat team member Taylor Cornell saying, “I don’t understand exactly why this is as close as it is lol” and another group member saying, “I’ll take Henry all day.”

Either way, it is clear that the public perception is that Derrick Henry is a better option going forward in PPR dynasty leagues than Kenyan Drake. I am just not sure that is true.

The Derrick Henry vs. Kenyan Drake battle started at Alabama and is the reason for this research to begin with. RotoHeatPons and I just won Alabama in a new “Pipeline League”. You fill each position with one player from the schools you win/draft, so we have to pick which RB to keep and which to allow to return to the player draft. While in a normal league we would have the benefit of being able to ask for Drake+ based on public perceived values, we are not able to do that here.

Both running backs played at Alabama from 2013-2015 (Drake was also there in 2012) and they are both currently 26 years old. It is no secret that Henry was favored in that Alabama backfield.

Even though he played with the Heisman winning Derrick Henry, Kenyan Drake still found himself drafted in the 3rd round, 73rd overall, in the NFL draft. That was less than a round (28 picks) after Henry was taken 45th overall in the 2nd round.

For both, these were basically lost fantasy seasons. In 2016, Henry was PPR RB44 overall and Kenyan Drake was RB74 overall. 2017 saw values increase. Derrick Henry jumped to RB37, while Kenyan Drake jumped to RB33. During this time, both running backs played full seasons.

2018 is when we saw both running backs really come into fantasy relevance. Derrick Henry saw his carries move up to 215, which helped him over double his touchdown output from 5 in his first two seasons to 12. On the back of the uptick in carries, he reached his first 1,000 yard season, finishing with 1,059 yards. This pushed him into RB2 territory with 201.36 points on 14.38 touches per game, at RB16 overall.

Kenyan Drake saw his value climb even further. While his carries dropped from 133 to 120, he added 19 receptions from the year before. So even though Drake had only 173 (10.81/game) total touches, 57 fewer than Henry, he still finished ahead of him as the RB14 overall. That is two years in a row that Drake has finished ahead of Derrick Henry for those that are counting, but…

Then 2019 came along and the Miami Dolphins again refused to use Drake, relying on a confusing infatuation with Kalen Ballage. On the other side, the Titans were riding Derrick Henry like they should. After all, I have never denied his brilliance as an NFL running back. I just think he is greatly overvalued in PPR leagues.

In weeks 1-8, Derrick Henry ranked as RB12 with 112.9 PPR points on 151 ATT and 8 receptions. During that period, Kenyan Drake was sitting down at RB41 after only 47 rushing attempts and 22 receptions. That is when everything changed. Kenyan Drake was traded to the Arizona Cardinals and freed from a terrible Miami team and a lack of usage.

From weeks 9-17, Derrick Henry was RB2 with 181.7 points and Kenyan Drake was RB6 with 159.4 points. The big difference was Kenyan Drake’s touches jumping from around 11/game to nearly 19. At this moment, we have to assume with David Johnson out of town, the Cardinals are going to look to utilize Drake in a similar manner going forward.

For me, there are two glaring reasons why I like Drake over Henry. First is body wear.

That is 601 more touches for Derrick Henry, or two extra 300 touch seasons. On top of that, is the fact that most of these touches are of the rushing variety, where the disparity was 717. If the argument is that Christian McCaffrey can handle all his touches because over 100 come from the receiving variety, then it seems obvious to me that the 717 extra rushing attempts don’t bode well for Henry’s longevity.

The second reason is obvious. Usage in the passing game. Let’s go back to 2015 and look at all RB1 & RB2’s with fewer than 25 receptions.

The 18 receptions Derrick Henry had in 2019 was his career high. Maybe he can get between 20-24, but I think it is very likely he stays under 25. Drake on the other hand, has had 50+ each of the past two seasons.

While I am not heavily factoring in team dynamics, there are some things to note. The Titans lost a big part of there offensive line in Jack Conklin, who was taken in the first round and 8th overall in that 2016 draft. Many thought the better move was for the Titans to franchise tag Conklin and take their chances of losing Henry. We don’t know how this will effect Henry going forward, but it has to be noted.

On the other side, the Arizona Cardinals have not made any changes to their offensive line. While it was not “great” it did improve as the season went on. What Arizona did do was land DeAndre Hopkins via trade. I won’t overvalue this either, but the impact of having one of the best WR’s in the game could help open up the running game a bit.

The only thing that has ever made Henry a more productive fantasy running back, has been touches. Let me illustrate this:

To put this in perspective, let’s take Drake’s Cardinal touches/game and Henry’s 2019 touches per game and multiply them for an idea of what 2020 could look like if they are around their career averages in points per touch.

As you can see, Drake doesn’t need the amount of work that Henry does. Actually, at their career averages, Drake only needs 84.4% of the work that Henry gets to match him from a PPR perspective. That is a 55 touch difference if Henry gets 352 of them, as Drake would only need 297 to top him.

While I will not argue with you if you bet on Henry’s ability to get those 300+ touches and for Drake not to, the argument, in my eyes, is just not that far off. When it comes to Derrick Henry or Kenyan Drake, in a vacuum (yes, you should be getting Drake+ for Henry in dynasty trades), I want Drake.

Make sure to keep an eye on our ADP & Rankings for where all players fall and hit me up on Twitter @RotoHeatRick to tell me how wrong I am.