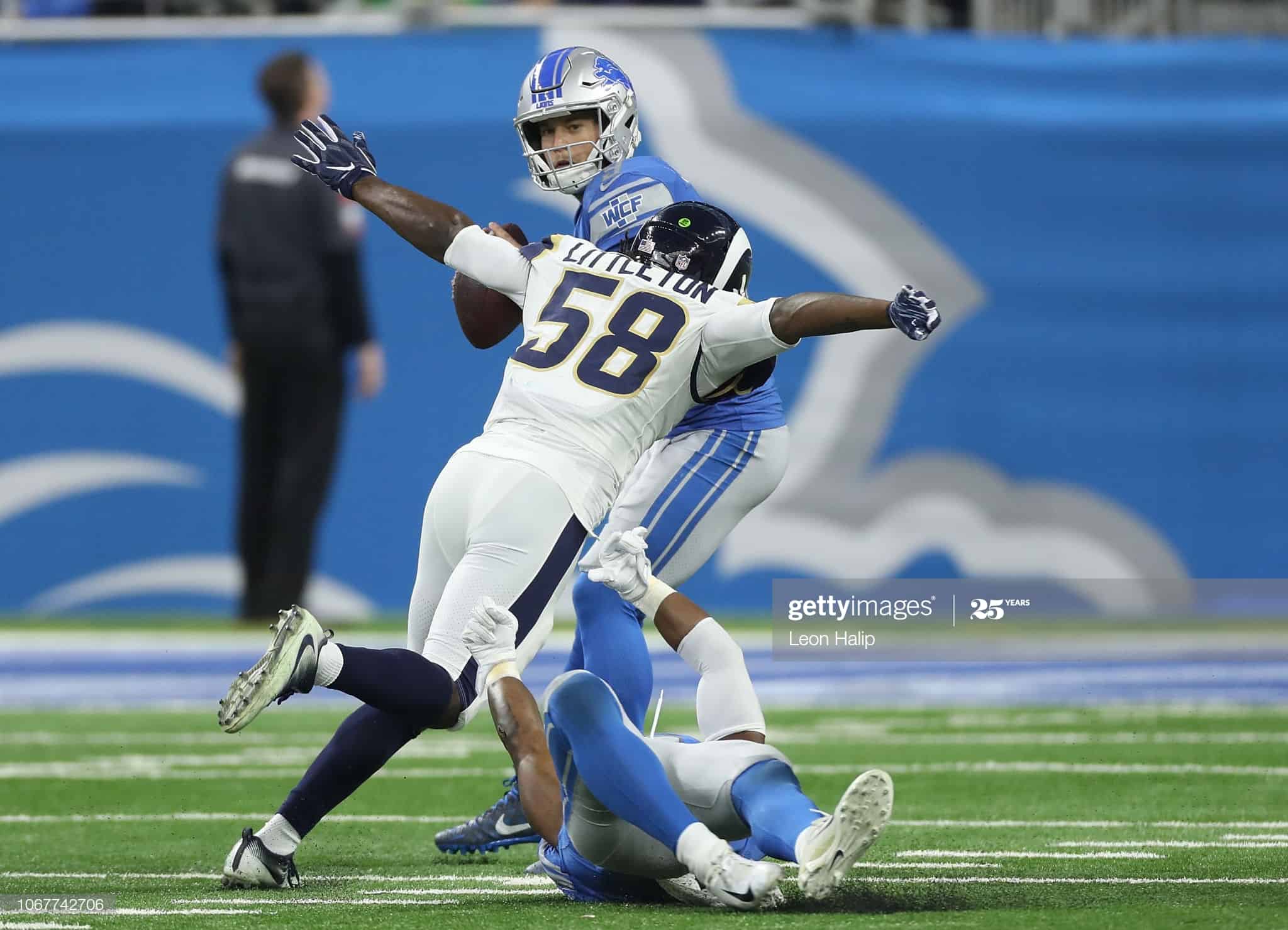 As a three star defensive end recruit to the University of Washington, California-native Cory Littleton had mixed results in college. He played a minor role in his Freshman year, and although he played in 13 games his Junior year, he only started in two and only had 37 tackles (22 solo, 3.5 for a loss) and one sack.

His Sophomore and Senior years, however, were good showings. Just looking at those two years (within which he started all the games he played in), he averaged 62.5 tackles (35.5 solos and 10.5 tackles for a loss) with 5.5 sacks and two passes defensed (statistics courtesy of Sports Reference).

Littleton was not drafted in the 2016 NFL Draft and signed with the Los Angeles Rams shortly after as an outside linebacker. He did not play on defense much in 2016 or 2017, but started all 16 games in 2018 and had a great year. He ended the year with 125 tackles (90 solo, 9 for a loss), four sacks, 13 pass deflections and 3 interceptions.

He followed that year up with another great one in 2019 when he ended with 134 tackles (78 solo, 6 for a loss), 3.5 sacks, nine pass deflections, and two interceptions. Within each of those years, he had 7.1 and 6.5 missed tackle rates, respectively (statistics courtesy of Pro Football Reference).

This offseason, Littleton signed a three year, $36 million dollar deal with the Las Vegas Raiders. The Raiders had a wholly underwhelming linebacker corps last year with the likes of Tahur Whitehead, Brandon Marshall, Will Compton, Nicholas Morrow, and Kyle Wilber starting at various times. Their linebacking corps will look very different this year, as they also signed Nick Kwiatkoski and have a healthy Marquel Lee back. Littleton and Kwiatkoski look like clear starters, with Morrow or Wilber as the other.

Littleton was the #5 linebacker last year using our RotoHeat IDP Scoring, and if healthy, I see a similar year this year. A lot changes year to year, but if he is healthy I see a high LB2 as his floor. He will have plenty of tackle opportunities in a division with lots of offensive firepower and a still young, but improving, defensive line.

With a three year deal starting this year in Las Vegas, I see Littleton as at least an LB2 for the next few years. In terms of getting tackles, I like Kwiatkoski more than any of the linebackers Littleton was competing with in Los Angeles the past two years (Mark Barron, Clay Matthews, Samson Ebukam, and Troy Reeder amongst others).

Given that, I do not expect Littleton to have as high of numbers as he did these past two years, but with those being the only two guys I like for IDP purposes in their linebacking corps, I still like his chances at LB1 production. The opportunities for tackles will be similar in Las Vegas to what they were in Los Angeles, and you should be able to put Littleton in your lineups and not worry about him for a few years.

If you are looking to trade for Cory Littleton, you would probably have to give some level of a second rounder in a draft pick trade. He showed the past two years he can amass tackles while also getting you some big plays, and he will continue to have those opportunities in Las Vegas. He turns 27 this year and should have a usefulness beyond his current three year contract.

Let us know what you think about Cory Littleton; we have him currently as the #7 overall IDP, and #3 linebacker in our free IDP Rankings. You can catch our IDP-Specific Live Stream Monday Nights @9:30 Eastern time over on YouTube! You can also find me on Twitter!