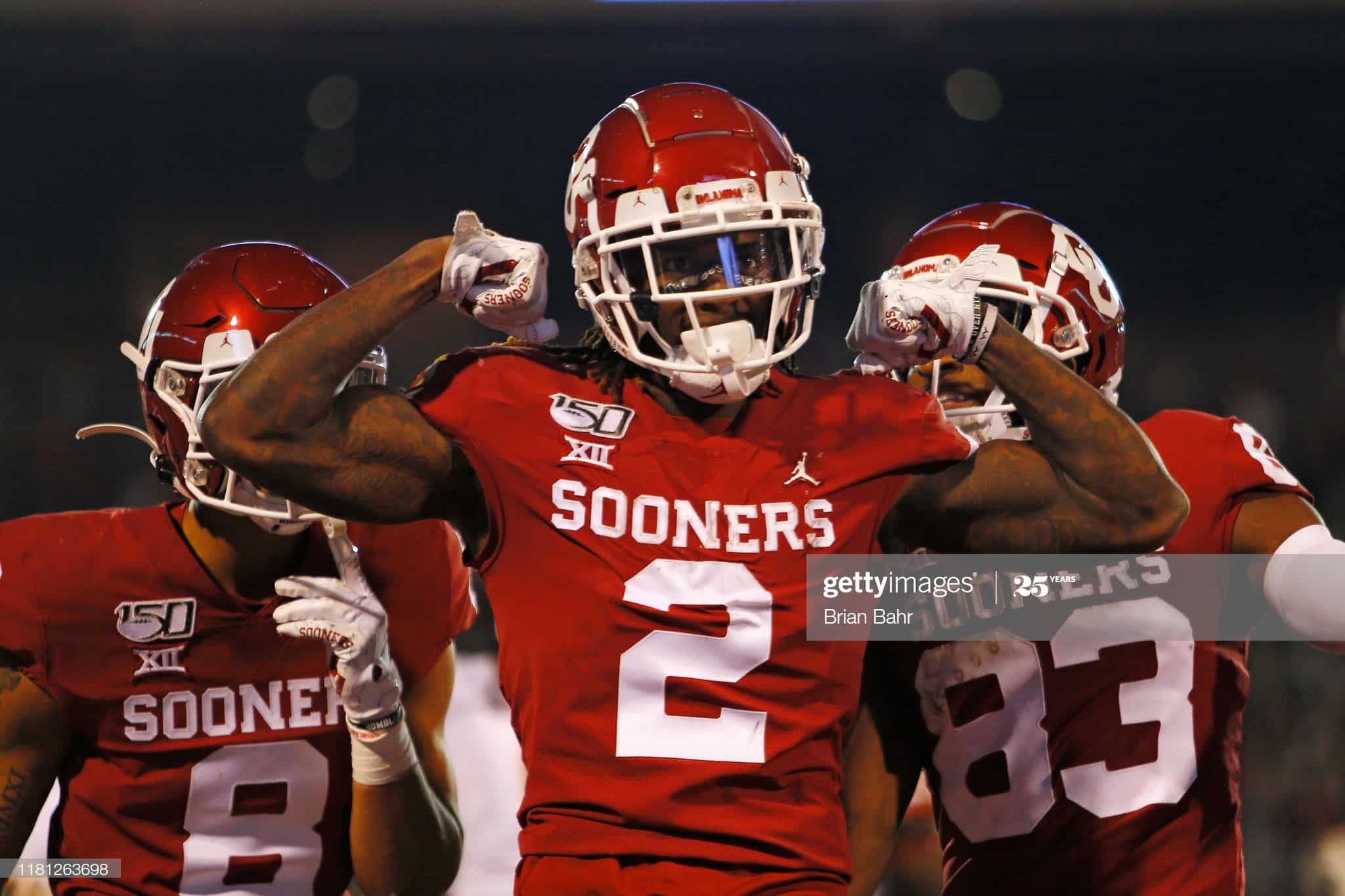 Oklahoma WR CeeDee Lamb was selected by the Dallas Cowboys in the first round (17th overall) of the 2020 NFL Draft.

In three seasons at Oklahoma, Lamb totaled 3,608 yards and 33 touchdowns on 173 receptions and 40 rushing attempts.

As a sophomore in 2018, his starting QB was Kyler Murray. Lamb was a key component in the Sooners 12-2 record and playoff appearance. He played in all 14 games, catching 65 passes for 1,158 yards and 11 touchdowns. He established a career-high with 167 receiving yards on six receptions and scored one touchdown in the Big 12 Championship game. He had a career-high of 8 receptions for 109 yards and one touchdown at the 2018 Orange Bowl.

As a junior in 2019, his first season without a Heisman Trophy winning quarterback, he caught passes from quarterback Jalen Hurts (who just happened to finish second in Heisman voting). CeeDee Lamb was named a first-team All-American after catching 62 passes for 1,327 yards and 14 touchdowns. His 21.4 yards average per reception was the most ever in a single-season by an OU player with at least 50 receptions. He was the Most Outstanding Player of the Big 12 Championship after collecting 173 yards on 8 receptions, and he had 4 receptions for 119 yards at the 2019 Peach Bowl against top ranked LSU.

Entering the 2020 NFL season, Lamb’s run of prolific quarterbacks continues, as he joins the Dallas Cowboys and Dak Prescott. Lamb’s speed and playmaking skills when he gets the ball in his hands will make him an instant impact player for the Cowboys and his dynasty managers.

Lamb enters an offense that ranked first in total yards, (6,904), 2nd in passing yards (4,751), and 6th in points scored (27.1 points per game) a year ago. Randall Cobb and Jason Witten have departed via free agency and 4th year TE Blake Jarwin and Lamb are their replacements. Cobb and Witten leave behind 166 targets, 118 catches, 1,357 yards and 7 touchdowns.

There was some concern about Lamb’s landing spot, but I think it’s as good as it gets. CeeDee Lamb is a more talented WR than Randall Cobb and is the most dangerous member of the Cowboys offense with the ball in his hands. Jason Witten, even in his golden years, is a much more dependable pass catching TE than Blake Jarwin. I expect Lamb to see 90+ targets in his rookie season and for him to flirt with 1,000 yards while finishing as a top 24 WR.

CeeDee Lamb has top 12 fantasy WR upside. There is some concern that Dak Prescott plays the 2020 season on the franchise tag and doesn’t return to Dallas in 2021. I am not a subscriber to that line of thought as I believe Dak gets his deal done prior to the 2020 season.

In 2021, I see Lamb supplanting Michael Gallup as the team’s number 2 WR and exceeding 1,000 yards as he sets himself up for his breakout 2022 season.

Lamb’s current start-up ADP is 36th overall and he is the 15th WR off the board. His rookie ADP is 6th, and he is the 2nd overall WR in 1QB formats.

Similar to my Tee Higgins 2020 Dynasty Outlook, I am higher than the consensus in the rookie ranks but lower in the 1QB ranks. This shouldn’t be taken as me not liking Lamb, as it’s quite the opposite. I do expect most of the rookies to a have less-than-ideal first season in 2020 due to COVID-19 and the reduced off-season programs.

I believe that the DLF ADP of 36th and the 15th WR is a little high, but it’s not enough for me to jump on the sell train. All rookies come with an element of risk, but I’m willing to play it out and see what Lamb delivers in 2020.

If I missed out on CeeDee in my rookie drafts and I am looking to buy, I would be willing to move Allen Robinson or Aaron Jones straight up to make it happen.

Thank you for reading the CeeDee Lamb 2020 Dynasty Outlook.