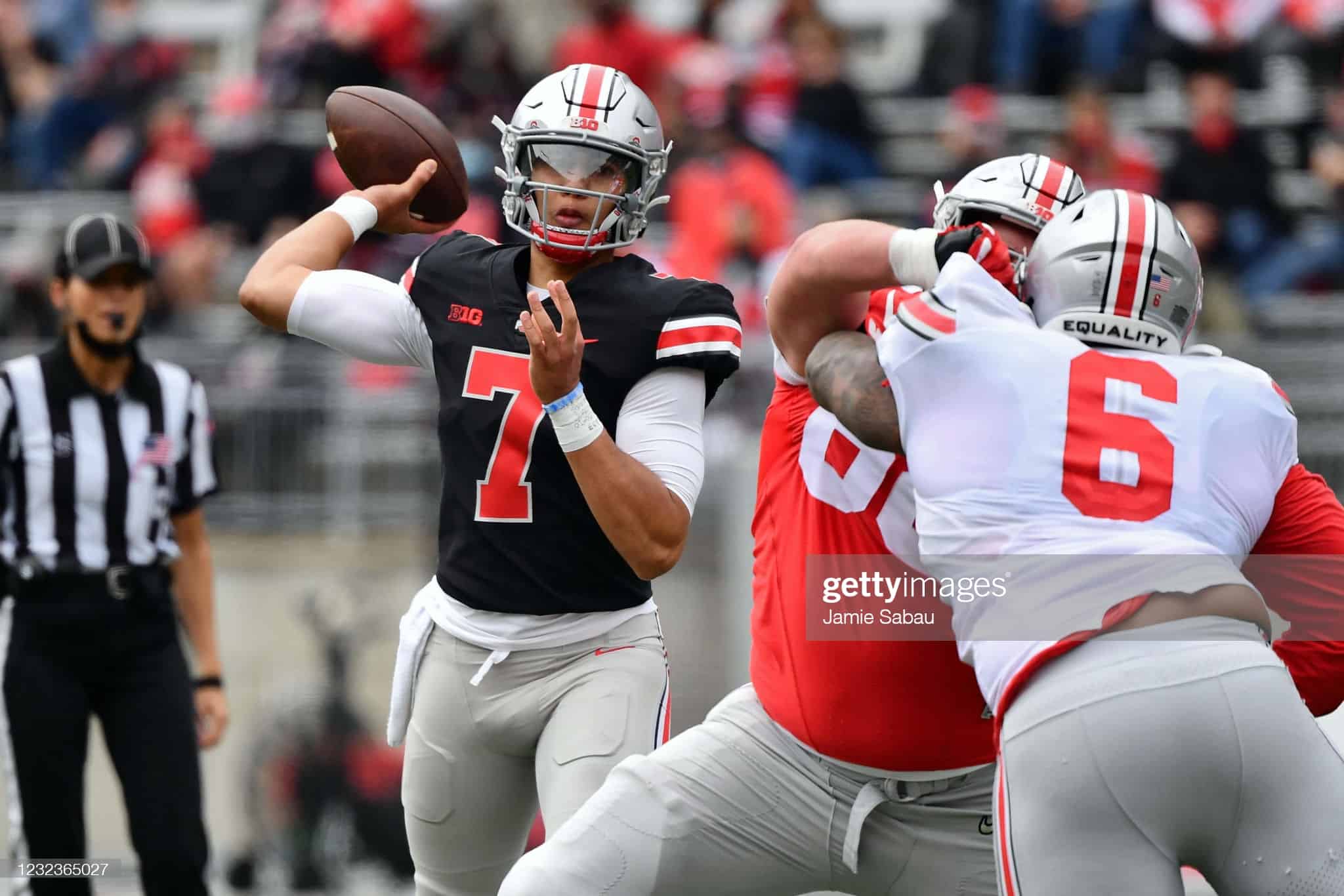 As college training camps are opening up, I wanted to give you a list of guys to watch this fall! I want to look at the Big-10 quarterbacks, and you’ll be surprised that there are plenty of players that can make a fantasy impact in this conference. Remember, the Big Ten’s made up of Illinois, Indiana, Iowa, Maryland, Michigan, Michigan State, Minnesota, Nebraska, Northwestern, Ohio State, Penn State, Purdue, Rutgers & Wisconsin.

At this point, with Justin Fields in the NFL, it looks like Indiana’s Michael Penix Jr. is the head of the Big 10 (until we see what Ohio State’s doing with their trio of potential stud QBs). At one point, the Penix-led Hoosiers were a top 10 team in the AP polls, and PFF gave him a top 40 grade of 82.9 with being a stronger passer than rusher. The surprising thing about Penix was even with the weapons he had, he was still only completing 56% of his passes and adding next to nothing from the running perspective (so be careful with him)!

After Penix, the Big 10 is wide open in terms of who’s going to be the next big quarterback in the conference. M y money’s on whomever is the man at Ohio State. CJ Stroud will get the first shot (freshman Quinn Ewers and Kyle McCord are really intriguing for the future though!), and the 2020 No. 2 pro-style QB (from 247 Sports) has some big shoes to fill, though with the talent around him, he should have no problem if he’s up to the challenge. If at the end of the year, you told me Stroud was the best QB statistically speaking in the Big 10, I wouldn’t be surprised one bit. He has good size and pocket awareness and has plus accuracy on the deep ball which will be huge for the big play wideouts he has in Garrett Wilson and Chris Olave.

After the top two options in the conference, it’s a real guessing game to see who’s the next player up. Michigan’s Cade McNamara has the talent around him to make some noise but might be the player holding the offense back. Now if you told me JJ McCarthy was the starter, I’d be more willing to say he’s got a chance to be at the top of the B1G. McNamara looks the part of an NFL backup at best, as he’s only 6’1″, not the most athletic QB in college by far, and his brightest spot is his decision making with the ball.

Tanner Morgan chose to come back to Minnesota, and with a PFF grade of 71.6, there’s plenty of room to improve. With PJ Fleck as your head coach, I’ll never rule him out of the conversation, but we need to see more 2019 Morgan as opposed to what was on the field last season. 2019 Morgan was smart with the football, was able to push the ball downfield to the tune of 11 air yards per attempt and a touchdown to interception ratio of 30-7.

Former Michigan QB Brandon Peters looks to head the Bret Bielema-led Illinois, Spencer Petraus leads Iowa, Taulia Tagovailoa looks to have one more chance to prove himself in the move to lead Maryland, Payton Thorne heads up the Michigan State Spartans, Adrian Martinez at Nebraska, Jack Plummer’s leading Purdue, Noah Vedral’s at Rutgers and Graham Mertz’s running Wisconsin’s offense. With that group of players, the names are bigger in some cases then the value of the play thus far in their careers. You will definitely see them on highlight reels this year, probably more so for what the defense is doing to them, rather than what they’re doing, unfortunately.

What happens at Northwestern is a bit of a X-factor in this whole equation. South Carolina transfer Ryan Hilinski and incumbent Hunter Johnson look to fill in where Peyton Ramsey left off in 2020. Neither has graded out well thus far in their college careers, but Johnson was at least a 5-star recruit when he came out of high school in 2017. Ultimately, I think Stroud and Penix are the more fantasy-relevant quarterbacks this season you’ll want to keep an eye on!

Thanks for stopping by, and I want to hear from you! Jump over to RotoHeat’s Discord or Facebook Group to keep the conversation going. Make sure to keep a lookout on YouTube and RotoHeat.com for more great fantasy football content. If you want to support what we’re doing in the fantasy football world, show some love over on Patreon.com/RotoHeat, and you’ll see a ton of premium content before the rest of the world!