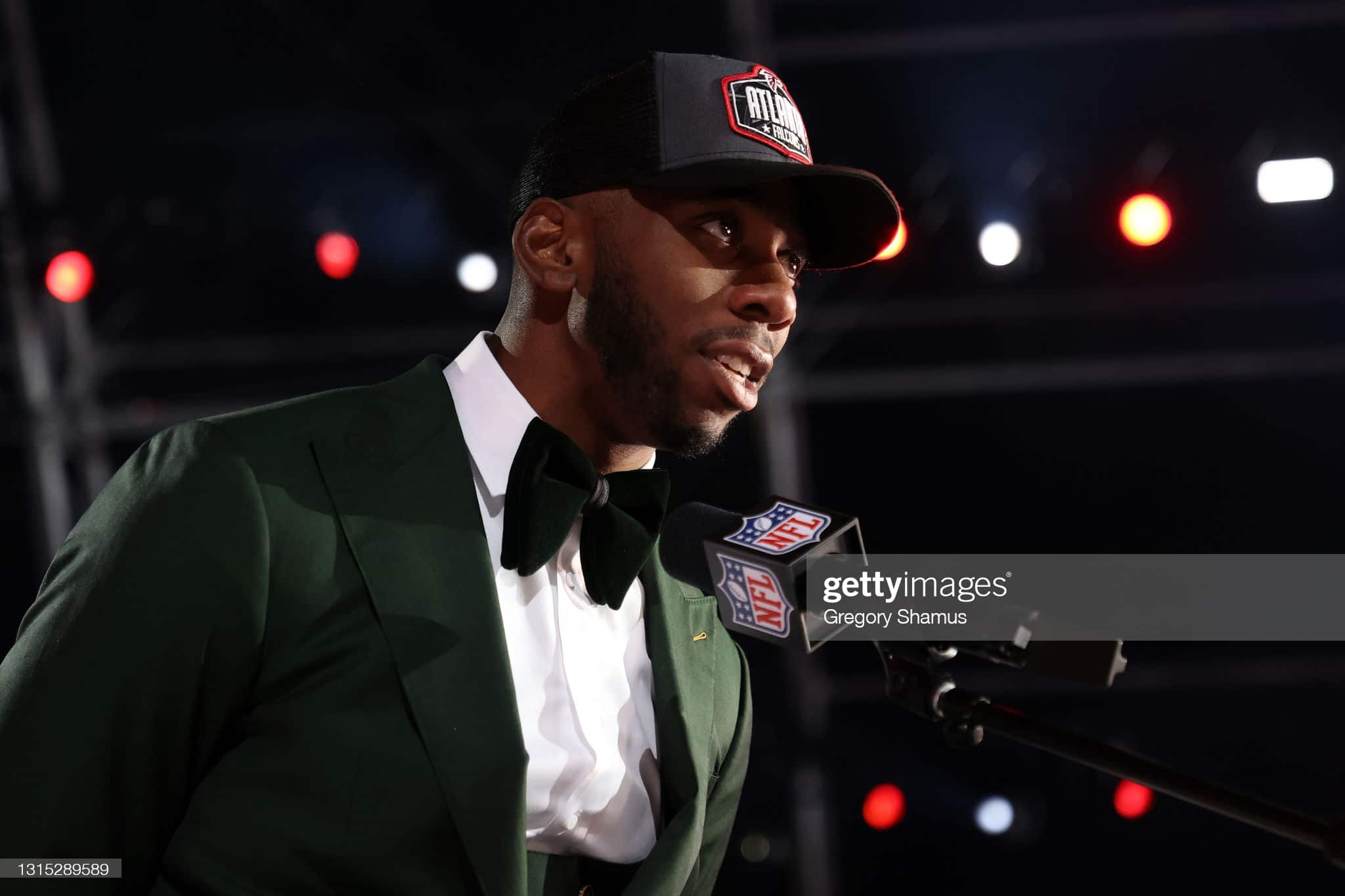 Welcome to a new article series here on RotoHeat – the “ADP Watch.” In the ADP Watch, we will be looking at players who have an ADP that is too high or too low for redraft leagues, and why you should shy away from that player at ADP cost or buy in to that player at ADP, or maybe even draft him higher than his ADP suggests.

In this very first article of the series, we are going to take a look at Kyle Pitts and why you should not draft the rookie tight end at his current ADP.

Coming into the draft, tight end rookie-to-be Kyle Pitts was widely regarded as one of the greatest talents of the entire draft. His draft capital ended up living up to that billing, as he was selected #4 overall by the Atlanta Falcons.

In the aftermath of the draft, his talent paired with his draft capital has seen Kyle Pitts’ ADP for mock drafts and redraft leagues rocket up the boards for a rookie.

That is way too rich for me for several reasons. First of all, you are paying a premium in redraft to get a player at a position who historically always struggle to learn the ropes as a rookie. I’m not saying Pitts cannot break the mold, but history among rookie tight ends suggests he won’t, and I have serious doubt he will live up to the price you have to pay to get him.

Don’t Overpay for a Rookie

Whenever you are drafting a player or trying to trade for a player, value is important. Sometimes, the perception of a player helps drive said players’ value up or down. In Pitts’ case, his perceived value is a lot higher than the level we can realistically expect him to play at as a rookie.

We have an almost entirely similar situation from last season. Clyde Edwards-Helaire was drafted by the Kansas City Chiefs which in and by itself caused a spike in his ADP. Then, the other main running back for the Chiefs, Damien Williams, decided to use the option to opt out of the season, vaulting CEH even further up redraft ADP rankings to a point where he often went off the board in the first round.

This meant that CEH would need to put up a Top 5 RB performance for the season. Maybe it was possible, but a lack of TDs and a late season injury squashed the dreams of many a CEH drafter in 2020.

This could likely be the same for Kyle Pitts in 2021. If you draft him in the fifth round, you need him to put up that TE4 performance on the season or he won’t have lived up to the high price you paid for him. If Pitts doesn’t live up to his high ADP, you will have essentially wasted a high pick.

Generally, the TE position is incredibly volatile outside the top 3, and until Pitts proves he can be up there year in and year out, it’s not worth paying the high price he has right now.

Outside of just picking a player like Pitts at peak value, you have also have to consider the other players who are on the board when you are picking him.

Picking Kyle Pitts means you are missing out on other players in that ADP range–players that could also help your team, some of them probably even more so than Pitts, because they play more valuable positions like RB or WR that you start multiples of in your lineup.

If you look at some of the players around the same immediate ADP as Kyle Pitts on Underdog ADP, we see players like Cooper Kupp, Diontae Johnson, Kenny Golladay and Adam Thielen around same ADP. If you want to take a QB, you can get Kyler Murray, Lamar Jackson or Dak Prescott around that range. I rarely want to grab a QB that early, but I would much rather take one of those three QBs than a tight end who is way overpriced as of writing this.

TE is often considered the least important position for a reason. Unless you can get guaranteed production from the TE-position, it’s not worth spending a high-to-mid redraft pick on it.

There are only a few tight ends who are basically a guarantee to produce. Pitts cannot be considered one of them…yet.

While Pitts is not to be considered a guarantee to produce, there are three other tight ends who are: Travis Kelce, George Kittle and Darren Waller. Those are the only three tight ends that are worth an early round pick in redrafts. These players have proven time and time again that they are the cream of the crop when it comes to tight ends in fantasy football. Kyle Pitts has yet to take a single snap in the NFL.

If you cannot get your hands on the top 3 at TE, or if you decide to go another direction with your early picks instead, do not start grabbing a tight end in the mid-rounds.

The game of fantasy is not about scoring more points at a given position, but to score more overall points for the week than your opponent. A mid-round tight end very rarely helps you accomplish that any better than a late round tight end does. So, if you don’t get one of the three aforementioned TEs, wait until the double-digit rounds and grab a TE there. If that TE doesn’t work out, you can easily drop him and pick up someone else (ie. streaming the position).

Instead of drafting Pitts at his current ADP of 54.5, or any other tight end at a mid-round price, you can get another asset at a more important position who will score more points on a weekly basis. That decision is more likely to score you more points in redraft leagues for the 2021 season.

At current ADP of 49.3 according to Underdog Fantasy ADP, the price you need to pay for Kyle Pitts is way too high. At that price, you need him to produce from Week 1 on to pay off.

Historically, first round tight ends do not produce that well for fantasy in their rookie season, outside 1 or 2 examples who go against the grain. Going by what we know, Pitts is unlikely to produce the entire season and be worth his current price tag.

Instead, you should be looking at drafting RBs or WRs in the same price range, because those positions are a lot more important and will likely provide you with higher point totals for the season for the same cost. As mentioned, you can even grab a quarterback if you feel like Kyler Murray or Lamar Jackson is worth it at slightly lower ADP.

My advice is to either grab a top 3 tight end (Kelce, Kittle or Waller) early if you want to get a positional advantage at TE, or punt on the position until the double digit rounds where you can take one or two shots at some sleeper TEs who could provide TE1 upside. We have seen in the past with the likes of Robert Tonyan, Mark Andrews and Darren Waller himself, before those players broke out. Just don’t pay the price for Kyle Pitts.