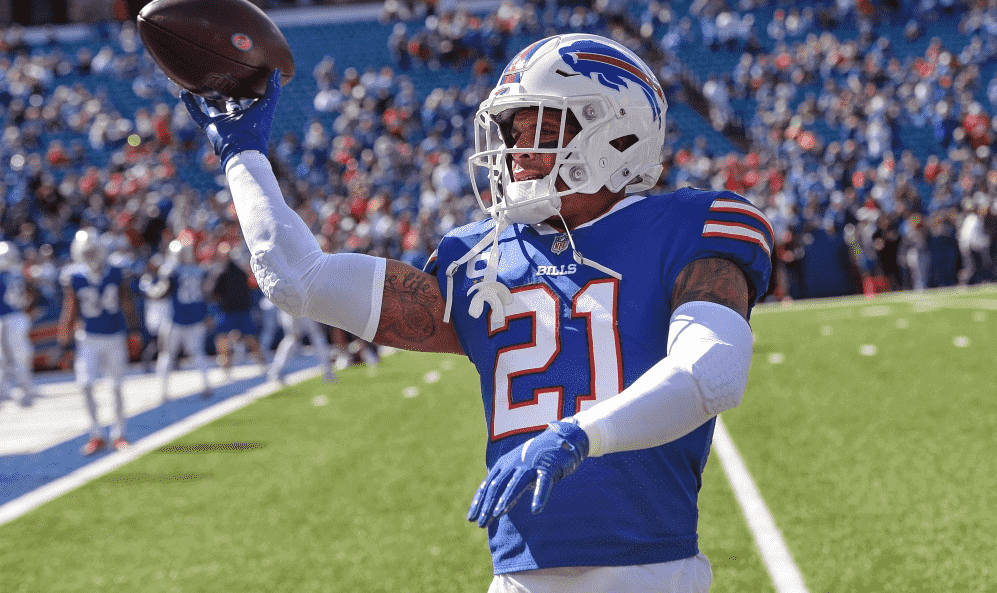 As we get into redraft season all I can think of is “Where did the offseason go?!” Team camps start picking up, the last of the free agents start signing, and rookie hype is in full swing; it all goes so fast this time of year! As you prepare for your drafts over the next two months I will be dropping articles for 2022 Top 10 Redraft X for you all. We will be starting with safeties this week.

As a reminder, when I am discussing redraft rankings we are looking at the RotoHeat Scoring we have talked about on prior shows and in articles. Always know your league, starting requirements, and scoring system.

The only question about Jamal Adams is “Will he be healthy?” We can’t predict injuries for players, especially ones that are not repetitive issues, but in the past three seasons, he has played in 14, 12, and 12 games. When he is on the field he will get you points. From 2018 to 2021 he was 1st, 2nd, 1st, and 11th in points per game for safeties.

Jamal has not graded out well the past two years in Seattle, but with the current overhaul of the defense going on there and the size of his contract, Jamal is going to be playing a large percentage of the snaps. For redraft purposes, he is still a top safety when on the field.

Jordan Poyer has been an underrated player since joining the Bills in 2017. Starting with that year he has ended the seasons (in order) as Safety 2, 4, 6, 2, and 9. Despite being 31 he does not have the wear and tear of a full-time player since he entered the league, as from 2013 – 2016 he was mainly on special teams and a back-up safety.

He gets plenty of tackles in the Bills defense (in part to how much other teams have to pass to keep up with the explosive Buffalo offense), but is no stranger to big plays either; he has 36 PD, 29 TFL, 18 INT, 10 sacks 6 forced, and 6 recovered, fumbles.

In 2020, his rookie year, Jeremy ended the season as Safety 3 behind only Jordan Poyer and Budda Baker. In 2021 he was Safety 6. Needless to say he has been a great young player to have on your team. Despite the lower yearly ending spot in 2021 he graded out better in 2021 than 2020 and had more solo tackles and TFLs in 2021. Part of what boosted him so much higher in 2020 was having two touchdowns in a 10-second span in the same game.

Jeremy has cemented himself as the safety to own in Carolina. In 2020 he played about 41% of his defensive snaps inthe box. In 2021 that jumped to over 50%. He has had over 100 combined tackles each of his first two years and I expect more of the same this year as the Panthers have done little to address their linebacker position.

A spitting image of his father, who was an NFL Pro Bowler in his own right, Antoine is still an underrated player in IDP leagues. This will only be his third year in the league but he is already a Pro Bowl player and NFL champion. For IDP purposes he (like the rest on this list) gets a good mix of big plays and tackles. He was Safety 12 in 2021, but when looking at points per game he was Safety 1. If you watched our IDP shows in 2020, he was my favorite safety in that draft class and I am happy to say I nailed this one.

Outside of his 2017 rookie year, 2021 was Budda’s worst season as an IDP asset. He played in every game, but his stats were not what people were hoping for after the prior three seasons:

Yes, he finished as Safety 10 in 2018 as well, but his PPG was two points lower a game. This was in part I think due to the breakout of Jalen Thompson next to him; Jalen was Safety 13 last year with 10.4 PPG. Budda’s strong history along with still managing a top 10 finish with a down 2021 (relatively) has me feeling comfortable enough to keep him in my top 10 for 2022.

Jayron is probably a surprise entrant here, but in 2021 he was Safety 4 overall and Safety 6 in points per game (11.1) His 2021 season saw him have only 37 fewer combined tackles than he had in his prior five seasons combined. Jayron was on a one-year deal with Dallas but resigned there this year and Dallas kept Dan Quinn as defensive coordinator. He is a great fit in Dan Quinn’s defensive scheme.

Jayron graded out well across the board and played all over the field. Out of 1,073 defensive snaps he had over 100 snaps lineup along the defensive line (176), free safety (182), in the box (446), and slot corner (215). With another year in the system, I am expecting another quality season from Jayron.

Kyle is a versatile safety that was used all over the field and played over 80% of the snap when fully healthy. With his previous proven production and a guaranteed spot on the field, I think he has a real shot to improve on a great 2021.

So why is he #9 for me if he has cracked the Top 10 once in the past four years? I like consistency. He provides a great tackle floor, will get some big plays, stays on the field, and is consistently playable. A lot of names higher than him on the lists for those years you will see one or two years and they are way down the list after/before, or just gone completely.

It is no secret that I am not a big fan of Minkah for fantasy football. Most of his career has been predicated on big plays versus consistent play. In over one-third of his career games, he has had four or fewer combined tackles. I like a safe floor with my safeties (no pun intended…seriously) and he did not show that until last year.

In 2021 he finally combined the big plays with big tackle numbers. He only had three games of four or fewer combined tackles, and set a career with 124 combined tackles; that is 44 more than his previous high his rookie year (2018). With the Steelers defense much the same as before, including middle linebacker questions, I do like Minkah to have another quality season in 2022.