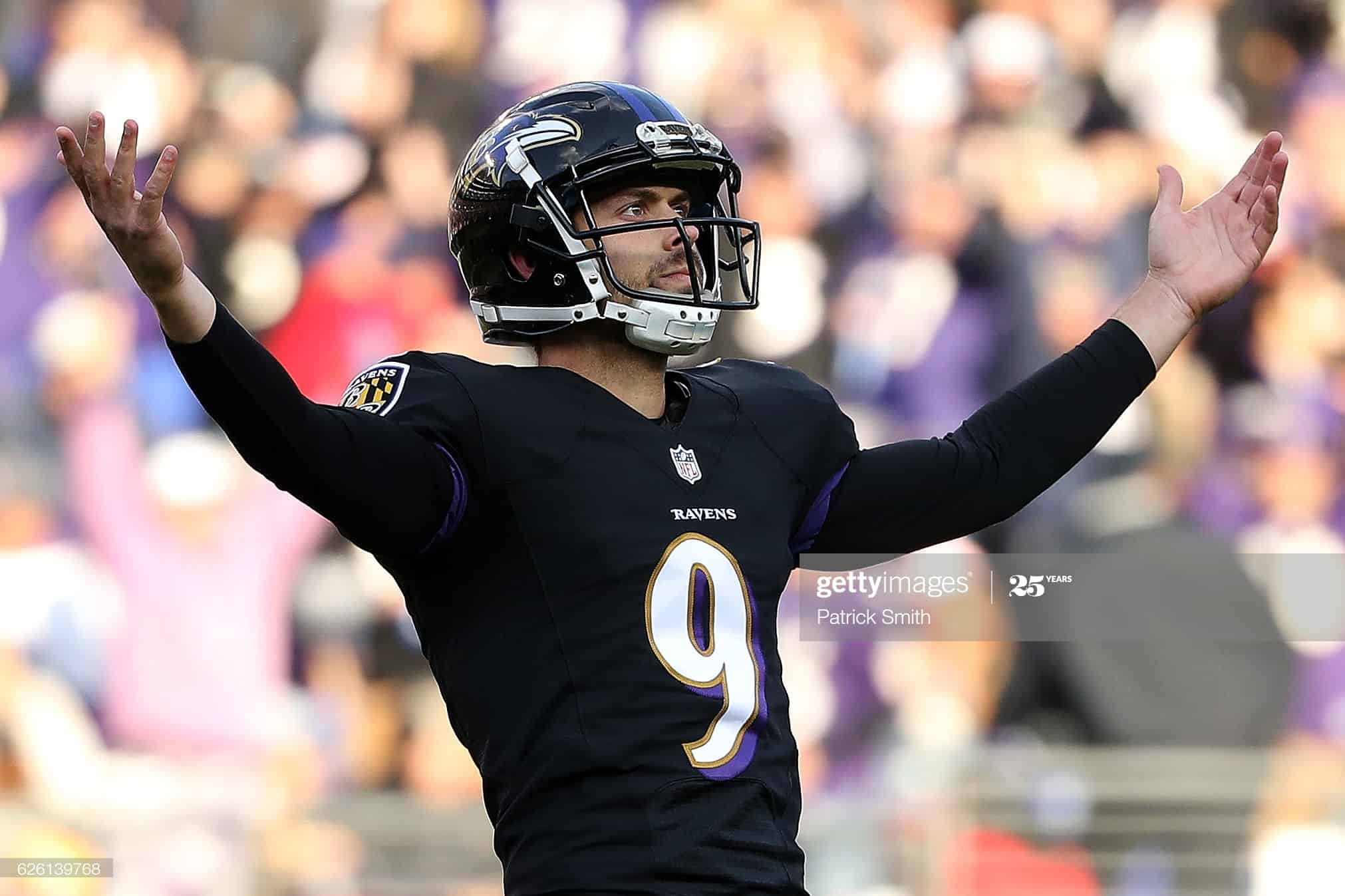 The RotoHeat 2020 Redraft Rankings Series brings you a look at the top 12 rankings for each position. Next up in the Series – 2020 Redraft Kicker Rankings. In Redraft Leagues, your team roster starts fresh each season. The RotoHeat 2020 Redraft Rankings Series takes a deep dive into those players that we feel are at the top of their positions entering 2020. Engage with passionate fantasy football managers, and let the RotoHeat content team know what topics YOU want to hear about by visiting our RotoHeat Redraft Fantasy Football Facebook page.

In the final installment of the RotoHeat 2020 Redraft Rankings Series we have the Kickers. The Kicker position finds itself in less and less leagues all the time. The reality is, in leagues that have a kicker position, kickers can have quite an impact week to week. The kicker should be your last selection or second last selection on draft day (DST should be the other). This is a highly streamable roster spot on your fantasy team. Don’t go blowing draft capital on a player you are dropping during their bye week.

ATLANTA, GA – DECEMBER 08: Younghoe Koo #7 of the Atlanta Falcons kicks a field goal as Ryan Allen #9 holds in the first half on an NFL game against the Carolina Panthers at Mercedes-Benz Stadium on December 8, 2019 in Atlanta, Georgia. (Photo by Todd Kirkland/Getty Images) 2020 Redraft Kicker Rankings

In 2019, Jason Myers finished as the K13 in fantasy with 117 points in 16 games. Myers was 40 of 44 on Extra Point Attempts (XPA) and 23 of 28 on field goal tries. He was 17/17 in field goal attempts under 40 yards and was 6 of 11 in attempts over 40 yards including 2 of 4 over 50 yards. The slow pace of the Seattle offense, combined with the efficiency of Russell Wilson in the red zone, limits Myers opportunities. His inaccuracy over 40 yards, the place where kickers make or break you in fantasy, certainly doesn’t help either. Stream Myers at times in 2020, but he is not a kicker I am confident in, and as such, he finds himself at 16 in the 2020 Redraft Kicker Rankings.

In 2019, Brandon McManus finished 9th in fantasy at the kicker position with 131 fantasy points and going 25 of 26 on XPA and 29 of 34 on his field goal attempts (85.3%) which ranked 12th. Playing in Denver has its perks for the kicker as the ball tends to travel further in the thin mile high air. McManus pounded thru 4 of 7 over 50 yards with his longest being 53 yards. I anticipate the Broncos offense to improve in 2020, limiting the FG opportunities for McManus, and as a result he slides down to 15 in the 2020 Redraft Kicker Rankings.

Ka’imi Fairbairn finished 2019 as K19 with 110 fantasy points. In 2018, Fairbairn was fantasy’s top scoring kicker with 170 points. In 2020, I anticipate the Texans offense to struggle compared to previous seasons. It’s possible that that benefits Fairbairn, but I am not holding my breath. He will be better than his 19th place finish last season, but he won’t come close to the 2018 result. Just outside the top 12 at number 14 seems logical for him in my 2020 Redraft Kicker Rankings.

Younghoe Koo has appeared in 12 games in 3 seasons. In 2017, he appeared in four games as a member of the Los Angeles Chargers, was out of football in 2018, and played in 8 games for the Atlanta Falcons a year ago. After wrestling away the job in Atlanta from Matt Bryant, Koo put up 93 fantasy points, averaging 11.6/game (tops in the league). He hit 88.5% of his FG attempts and 93.8% of his XPA. In the high profile offense in Atlanta, Koo will have his opportunities in 2020 to be a top 12 kicker, but I am banking on the Falcons scoring more touchdowns as well.

Dan Bailey was last year’s 8th highest scoring fantasy kicker by posting 132 fantasy points. Bailey had an impressive 2019 campaign with Minnesota after a 2018 season where he only connected on 75% of his field goal attempts. He went 27-29 on field goal attempts and 40-44 on XPA last year for the Vikings. Bailey seems to have found a new home in Minnesota for at least the next three years after playing in Dallas for the first seven years of his career. I do expect the Vikings to regress on offense, and I do think that Bailey is limited as a result. 12th in the 2020 Redraft Kicker Rankings seems like a safe bet.

BALTIMORE, MD – AUGUST 15: Mason Crosby #2 of the Green Bay Packers kicks a field goal during the second half of a preseason game against the Baltimore Ravens at M&T Bank Stadium on August 15, 2019 in Baltimore, Maryland. (Photo by Will Newton/Getty Images) 2020 Redraft Kicker Rankings

CARSON, CA – AUGUST 24: Ty Long #1 of the Los Angeles Chargers holds while Mike Badgley #4 kicks a field goal for the first score of the game against Seattle Seahawks in the first quarter during a pre-season NFL football game at Dignity Health Sports Park on August 24, 2019 in Carson, California. (Photo by John McCoy/Getty Images) 2020 Redraft Kicker Rankings

Michael Badgley missed the first eight games of 2019 with a groin injury, but he finished the final half of the season scoring at least 10 fantasy points in three outings. He finished the season as K31 and his 7.1 points a game ranked 25th. The reality is the Chargers offense should give Badgley plenty of scoring chances, and he should be considered a starting fantasy option in all formats to open the year. As a result, I have him at 10 in the 2020 Redraft Kicker Rankings.

ARLINGTON, TX – NOVEMBER 19: Jake Elliott #4 of the Philadelphia Eagles attempts, but misses, a field goal attempt in the first quarter of a football game against the Dallas Cowboys at AT&T Stadium on November 19, 2017 in Arlington, Texas. (Photo by Tom Pennington/Getty Images) 2020 Redraft Kicker Rankings

Jake Elliott should be considered a No. 1 Fantasy kicker in all leagues. Even though he scored the fewest fantasy points of his three-year career in 2019, he’s still capable of a big season based on Philadelphia’s offense and ability to score points. He already has two years with at least 26 field goals and three years with at least 33 XPA. Elliott is a low-end starter going into the season, but he could emerge as a top-five kicker by the end of the year. I am more comfortable having him here at 10 in the 2020 Redraft Kicker Rankings.

For four straight seasons, Matt Prater has finished as a top-12 kicker in Fantasy Football. Prater has hit at least 83% of his kicks in each of those four seasons, and with no reason to expect the Lions offense to trail off with Matthew Stafford back under center, Prater profiles as a safe choice as your teams fantasy kicker to start the season. As the season wears on and weather turns, I look for kickers that kick indoors; this, and Prater’s big leg, earn him a spot at 8 in the 2020 Redraft Kicker Rankings.

In his first full season in Arizona last year, Zane Gonzalez finished fifth in fantasy with 136 points powered by 31 field goals (fourth) and 34 extra points (tied for 15th). His accuracy was on point as well, as evidenced by him making 89 percent of his field-goal attempts and missing just one XPA. Arizona was 29th in the NFL in red zone efficiency in 2019, converting only 45.28% of their trips into touchdowns. They will be better in 2020, so a repeat of 31 field goals seems unlikely. As a result, expect some regression from Gonzo. He comes in at number seven in the 2020 Redraft Kicker Rankings.

TAMPA, FL – SEP 22: Matt Gay (9) of the Bucs kicks a field goal from the hold of Bradley Pinion (8) during the regular season game between the New York Giants and the Tampa Bay Buccaneers on September 22, 2019 at Raymond James Stadium in Tampa, Florida. (Photo by Cliff Welch/Icon Sportswire via Getty Images) 2020 Redraft Kicker Rankings

Matt Gay likely won’t repeat his top-five finish from 2019, but he’s draftable as a starting kicker in all leagues. Gay’s finish in 2019 was more about opportunity than success. He missed five extra points and eight field goals, including two kicks inside of 30 yards. Tampa Bay spent a fifth round pick on Gay, so his job is probably safe to start the year, and this figures to be an offense that will still provide a lot of opportunities. Brady in Tampa means less turnovers and more opportunities. If he can work out his accuracy issues, 6th in the 2020 Redraft Kicker Rankings might end up being a little low.

Robbie Gould was 23-for-31 on FG attempts and 41-for-42 on XPA in 13 games in 2019. Gould had a rough start to the 2019 season after finishing 2018 as the most accurate kicker in the league. The 36-year-old missed seven kicks over his first six contests (12-for-19), and then he went down to injury Week 9 in what appeared to be a disastrous campaign. The team went back to Gould in Week 13 and he responded by going 17-for-18 (including his first make of 50-plus yards) over his final eight games of the season. Gould’s second-half bounce back has restored my faith that he is my number 5 ranked kicker in the 2020 Redraft Kicker Rankings.

Greg Zuerlein signed with the Cowboys this offseason. He’ll be Dallas’ fifth kicker in four seasons. That shouldn’t be a problem, since whoever has kicked for the Cowboys over the past 11 seasons has attempted at least 29 field goals per year. That should lead to plenty of points for Zuerlein, provided he stays healthy. He’s hit at least 80% of his field goals in five of the past seven seasons, so expecting nice numbers seems easy. He’s worthy of the ranking here in the 2020 Redraft Kicker Rankings.

Wil Lutz should be one of the first kickers drafted in your leagues. Lutz was the No. 2 kicker in Fantasy in 2019 and has made at least 28 field goals in each of his four NFL seasons. He has everything I look for in a Fantasy kicker; he’s talented, on a great offense and will kick more than half of his games indoors. Lutz is in a tier by himself in my opinion and lands at 3 in the 2020 Redraft Kicker Rankings.

Harrison Butker should be considered a top two Fantasy kicker in all leagues. He finished 2019 as the No. 1 Fantasy kicker, and he scored at least 10 Fantasy points in 10 games. Butker hit 34 of 38 FGs and 45 of 48 XPA last season. What stands out is the 13/13 over 40 yards and the season long FG of 56 yards. The Chiefs offense should continue to give Butker plenty of scoring chances, and he should be considered a top-three Fantasy kicker on Draft Day in all formats. He is at 2 in the 2020 Redraft Kicker Rankings, and in a tier with our top ranked kicker.

PITTSBURGH, PA – OCTOBER 01: Sam Koch #4 of the Baltimore Ravens holds the ball for kicker Justin Tucker #9 as he attempts a 52-yard field goal in overtime. Tucker’s kick led the Ravens to a 23-20 win over the Pittsburgh Steelers at Heinz Field on October 1, 2015 in Pittsburgh, Pennsylvania. (Photo by Jared Wickerham/Getty Images) 2020 Redraft Kicker Rankings

Justin Tucker is tops in the 2020 Redraft Kicker Rankings. Wouldn’t it be easy if every kicker was as automatic as Tucker? He’s been in the league eight years and he’s been a top-10 kicker eight times including top-3 finishes in each of the last two seasons. He’s made at least 28 field goals annually and continues to be an absolute rock star for the Ravens. I wouldn’t suggest taking a kicker before the second to last round of your drafts, but if I did, he’s the one that would warrant a selection before the final round of Draft Day.

Thank you for reading the 2020 Redraft Kicker Rankings.