Ok, so we have arrived at Thanksgiving, so it’s way too early to pick who’s being drafting whom in 7 months, not knowing free agents moves but why not! If the season ended today, here would be the draft order and my guess for their choice:

He’s the best player in the draft, even if he hasn’t played much this year he will still be the best player in the draft. My issue with this is that San Fran has nice ends in Thomas and Armstead but at their size and ability, you pick one and shift him inside and you now have 4 first round picks on that d-line, and with the way the NFL is going, you need talented lineman disrupting the offense. 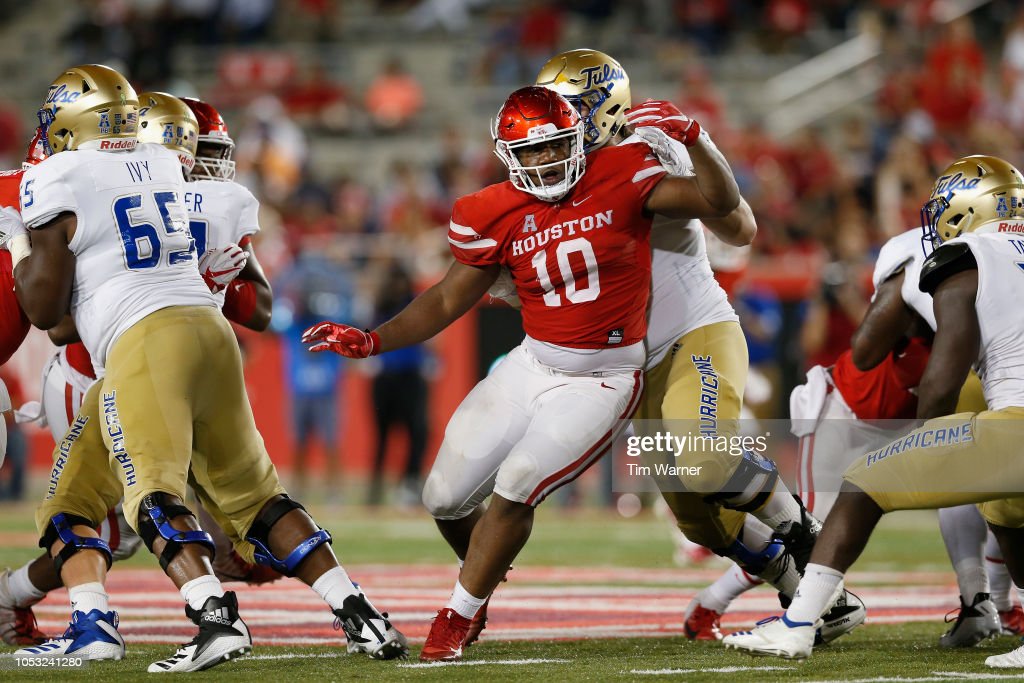 This guy is a man amongst boys, at 6’2” 290 lbs. Oliver is one of the more athletic defensive linemen in this draft class and maybe even in the last 10-15 years, and there have been some amazing lineman in that timeframe. Arizona has a ton of holes on their roster, and I wouldn’t be upset if they traded the pick to acquire more draft capital but if they don’t, it’s nearly a no-brainer here.

Oakland’s defense is rough, but the line has potential if they just add a high-end talent who can help the fans forget Khalil Mack used to be on your team. Ferrell has supreme athletic ability, and with the other guys they have on that line can make it quickly become a strong point moving forward.

The Jets got their QB in Darnold this year but now they need to keep him safe, that o-line is brutal so the rebuilding process needs to happen fast. A five-star recruit out of high school, Little has the size and athleticism to stay on the outside in the pros if he takes his run blocking to the next level he could be a really nice addition.

They devoted a 1st last year to Hernandez but that just isn’t enough. Insert Williams across from Hernandez and really start to make that line look up, this changes to a QB if you think Lauletta isn’t a guy they want to give a chance to start, I think he’s going to get a chance and Eli will still be there. This team has a ton of holes and could go DLine, Linebacker, Corner, Safety I mean anything defense should be an acceptable choice also.

Their Defense is in a decent place, and will need their first few picks to be aimed at the offense, and in theory along the line, though without any receivers taken yet at this point give me AJ Brown and hope that Josh Allen can actually get him the ball, at this point you can keep Benjamin and Zay Jones and you have a nice 1-2-3 at the top of your WR corp.

Bortles’ poor play and Jacksonville looking at the run instead of the pass in a losing effort to Pittsburgh tells me the coaches don’t trust Blake anymore. Bring in a new face of the franchise and with that amount of talent, he should have no problem making an immediate impact. He has the size, strength, and speed to make a big impact in this new look NFL we are seeing, where your QB is more of a dual-threat player. 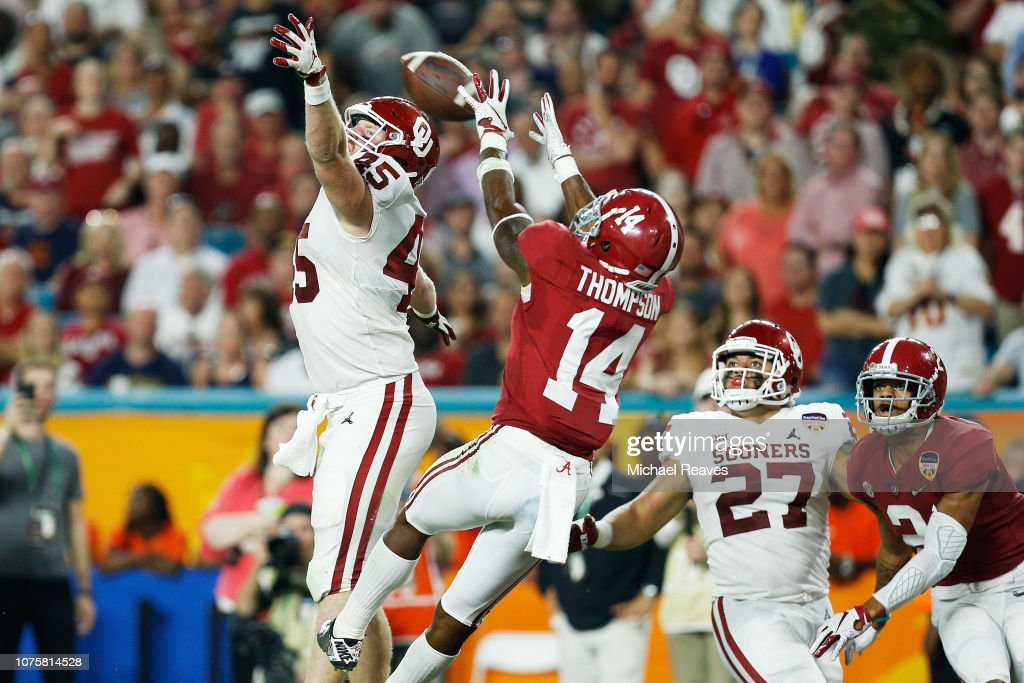 Tampa Bay looks lost this year, a team with a ton of talent really needs some help in the back end of the defense. Insert a top-tier talent like Thompson and you should see immediate results.

At 6’3” 285 lbs. He will need to bulk up probably 10-15 lbs. Before next season but at his size he has the frame to be able to do that without losing the explosiveness he has. He has a ton of power, and really good hands from what I read and see, so put a guy like him next to Garrett and Ogbah and make that defense nearly unstoppable.

Another year, another Josh Allen in the top end of the 1st round, though this one is a beast off the edge. In the last 3 seasons, he’s had 7, 7 and 13 sacks. This guy has a way to wreak havoc and the Lions desperately needs a difference maker along the line.

A weird year for the Falcons will give them a shot at a nice prospect to add to an already stacked roster. They have some nice pieces on the offensive line but let’s take it to the next level with an absolute road-grader for the interior of that line in Biadasz from Wisconsin. This guy makes them that much better on offense, and it seems like a no-brainer to me (but who am I really lol).

Another team that has a nice roster but needs o-line help and Biadasz partner on that Wisconsin line would be a great addition to the Broncos. They could go after a QB here but just doesn’t make much sense with as rough as their line has been this year. I’d also be happy for them if they to Greedy Williams here, I just think their offensive line needs more love.

Denver’s pass will make Philly that much better, we just saw Drew Brees destroy that defense with ease and they need to add a superior athlete at the Corner position, insert Williams and get back into the playoff race next year. At 6’1”, and the fact that he plays man coverage very well, it’s all things you want in your Corner’s that tend to get left on an island, Williams is a guy that in the next few years can become a lockdown CB to handle the oppositions top WR.

They have to keep Aaron Rodgers safe, Risner’s big and has the size to lock down the right side of the line and keep Khalil Mack off of A-Rod’s back in time. He is good at pass protection but needs a bit of help in the run blocking, he definitely has the talent to start and only get better over time. 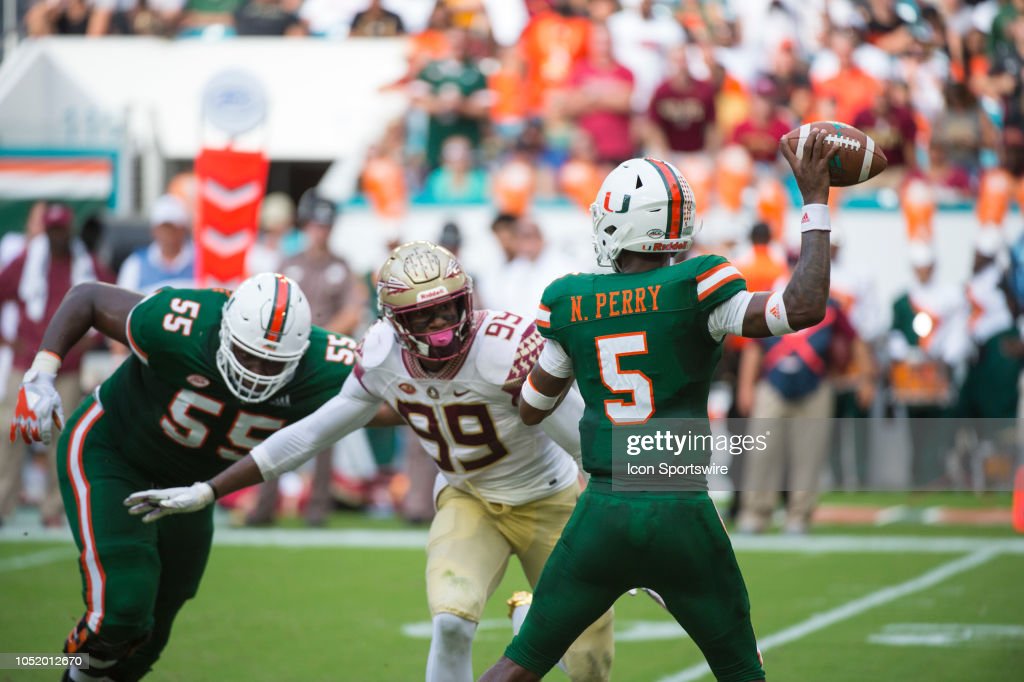 Darius Leonard has been amazing, and with Indy putting some resources last year in the D-Line lets go get an absolute stud in Wilson, and make that Linebacking group a huge strength. This dude is super-aggressive and has a motor that doesn’t quit, put him with Leonard and Walker and just go nuts!

They are a team that could go QB because we have learned what they have in Tannehill, and injury-prone, meh QB who is better suited to be a backup then franchise leading guy. With all the losses they had along the defensive line, Burns can make a difference and at his height but he weighs in at only 231 so that is a bit concerning in my mind. 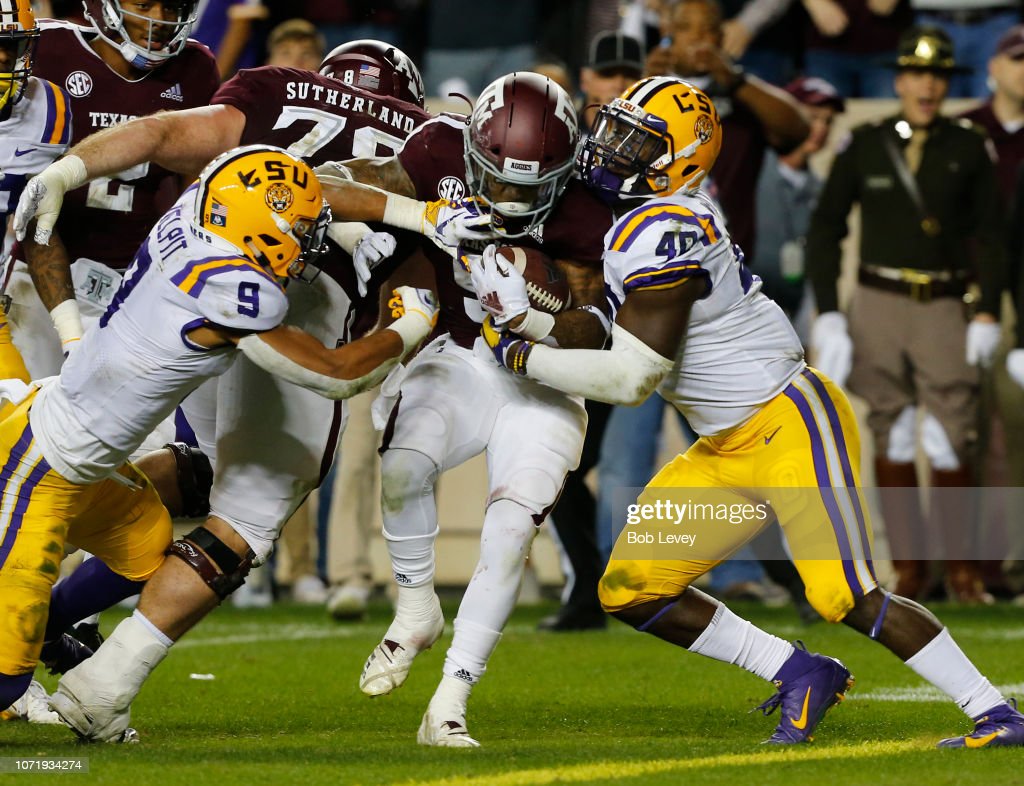 With Wilson already off the board, Gruden continues to remake that defense with a speedy White who can cover sideline to sideline. Tahir Whitehead is a tackle machine but Oakland needs a leader in the middle of that defense and White can be that guy.

He will probably go way higher, this dude is talented and massive at 6’6” 300 lbs. The reason this guy could slip is his get-off, he really needs some development in his explosion, and if he can develop this is a huge pick for a Tennessee team you see get gashed week in and out.

Seattle could go d-line but that offensive line has been brutal for a while, and they need all the help they can get. This guy is a little tight in the hips but he’s got the strength and length to make a difference and should be an immediate starter in Seattle.

I know Cinci has put high picks in the corners recently but every week I watch them get pummeled through the air, and at 6’0” he makes some really nice plays and can cover those big receivers real nicely.

He has the perfect size to be the replacement to Suggs or Smith, at 6’5” 241 he can step right in and make a difference. At MS State, he has averaged 10 sacks a season the last couple years, and this guy has a great first step.

A guy who has played both guard and tackle, he can come into that Minnesota line and win a starting job at either spot, as Minnesota needs some help along the line.

6’3” 225 lbs. He has the size and intangibles to be a WR 1 for a team that has the potential to lose a few WR’s this offseason, now this will change to a QB if Alex Smith is done, so I’d pick a QB like Drew Lock or Grier if they need a QB.

Houston could use some offensive line help, and McGary is a massive man at 6’6” 318 lbs, and has enough athleticism to be a tackle in the NFL. He plays better in pass pro but with his get off he will develop into a better run blocker in time.

This is a true boom or bust edge rusher, he can get off as fast as anyone in the draft but you tend to lose him while watching film on the Gators, which is concerning. Carolina needs help along the d-line and Polite could be a big choice for them. 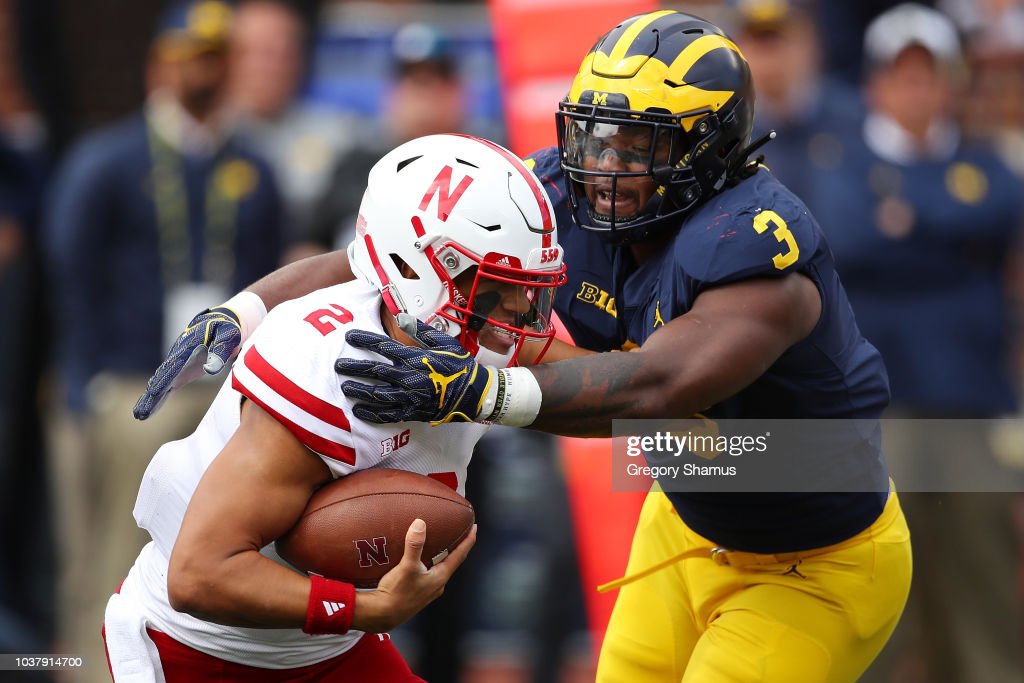 WOW, getting Ferrell at the top of the draft and Gary now you really have bolstered that line and that quickly becomes a strength for their team. You can now move these guys along the line and cause mismatches for opposing coordinators.

This dude is super strong, and can really bull rush the offensive lineman with ease. The Chargers don’t have a ton of holes so might as well go with the best guy at a position that will become a need in the next few years, so there you go.

Johnson is a leader of the canes and he is a real presence even at only 5’11”, New England needs some help in the secondary and either corner or safety would be a nice pickup for the pats.

A big, physical corner is exactly what the Steelers could use, watching team light up Artie Burns tells me that they need some help, insert Oruwariye and Burns then can slide to the slot or to a backup role.

I love Wisconsin’s line, they produce a really nice group of pros every year it seems like. 6’6” 321 lbs. He is a strong sturdy lineman who should turn into a really nice pro and looks the part of a typical Packers lineman.

They need help in their secondary, assuming Berry comes back ready to go adding a corner only makes sense. Mullen looks like the next best corner based on who i’ve taken so far, will take time to develop but will get plenty of reps as their corners currently on the roster are meh at best. 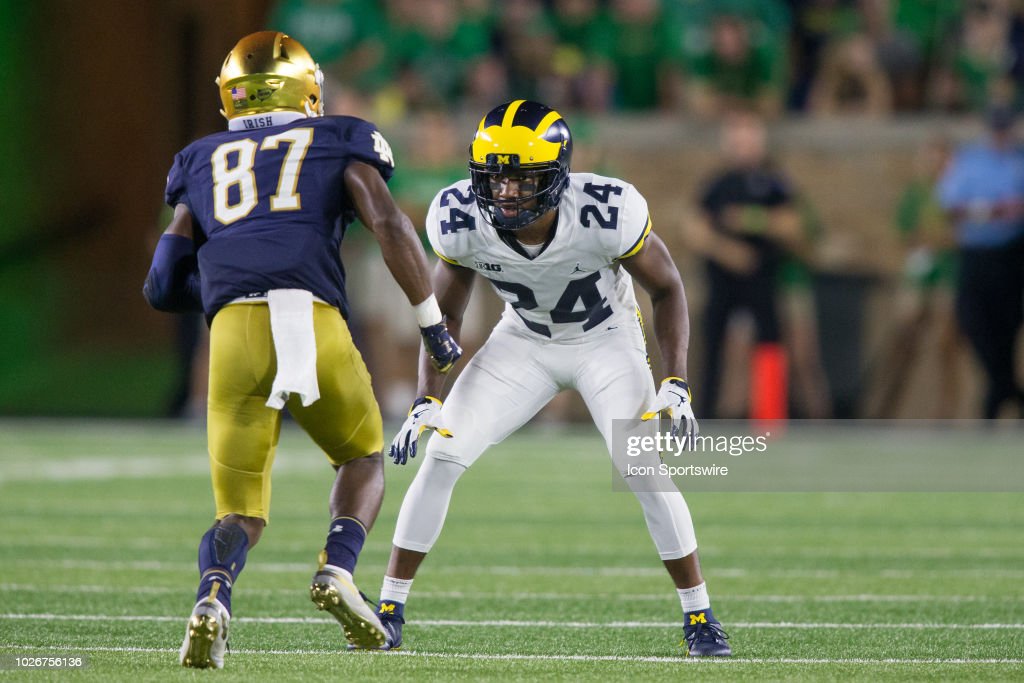 Not the biggest corner, he is sound in his technique and as the corners they have currently are on contracts that are up after next year, they should look at this position and give the rookie time to learn from some of the better corners in the league.