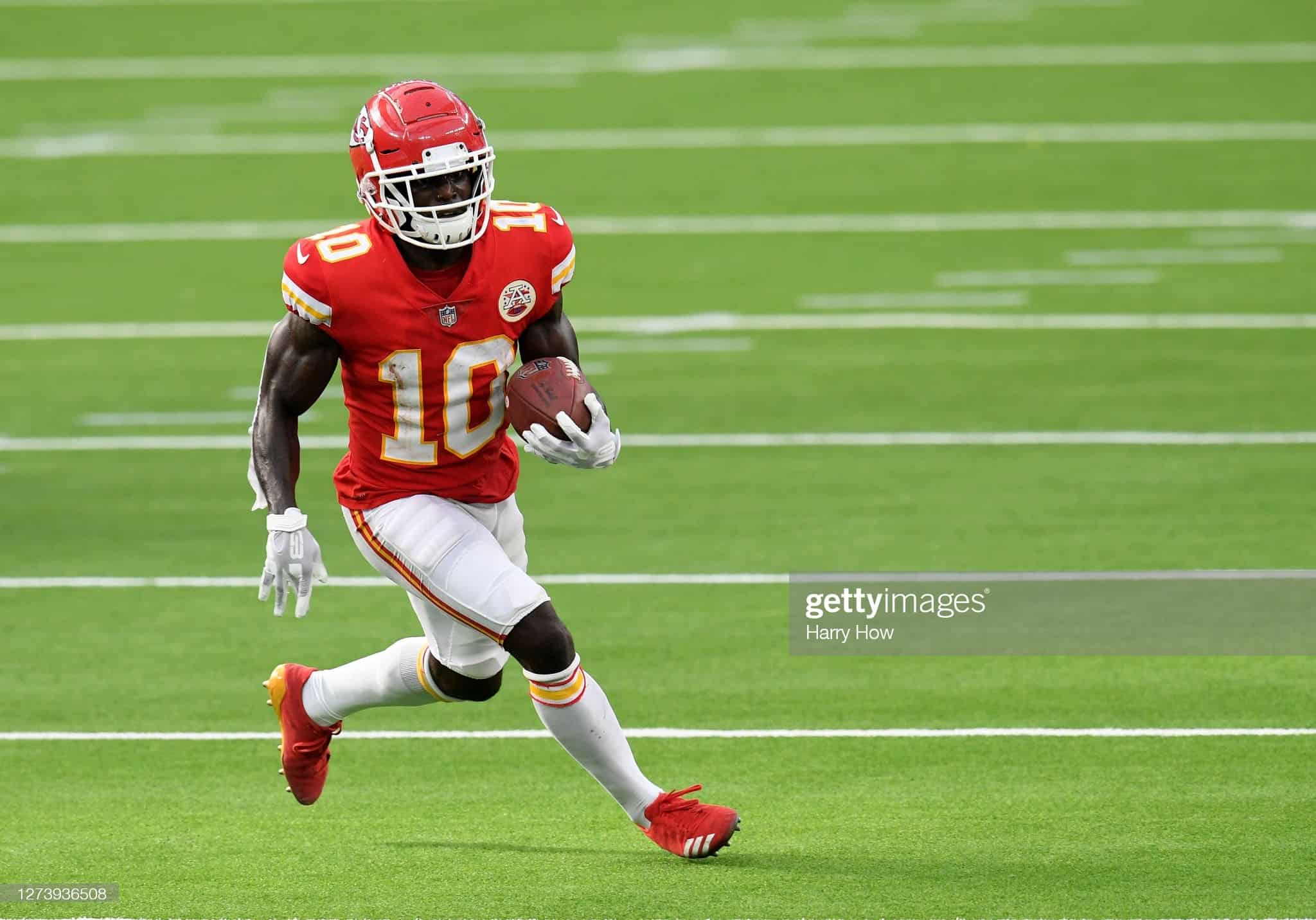 West Alabama WR Tyreek Hill was selected by the Kansas City Chiefs in the fifth round (165th overall) in the 2016 NFL Draft. Entering the draft, Hill was widely expected to make it through the draft without being selected. He was expected to go undrafted not due of a lack of talent, but teams pulled Hill off their draft boards due to the off-field history that Hill carried with him into the NFL. With the pick, the Chiefs made Tyreek the 18th wide receiver selected in the draft.

In 2013, Tyreek played a season at Garden City Community College. Coming out of JUCO, Hill was highly sought after and he made the decision to attend Oklahoma State. Hill played 12 games for the Cowboys in 2014–as a running back. He totaled 815 yards and three touches on his 133 touches. Prior to completing his season at OKSU, he was dismissed from their football and track teams as a result of his his domestic violence arrest.

The following season, West Alabama announced that they added Hill and would play football for the Tigers. Tyreek was used as both a running back and a wide receiver. He had 25 carries for 237 yards with a touchdown and added 27 receptions for 444 yards and another score. Hill declared for the NFL draft after completing his 2015 season with West Alabama.

Hill began his rookie season as the Chiefs’ starting punt returner, kick returner, and their fourth wide receiver on their depth chart behind Jeremy Maclin, Chris Conley, and Albert Wilson. Hill totaled 860 scrimmage yards and scored nine touchdowns on 85 touches. In addition to his scrimmage yards, Hill added 976 return yards and 3 scores on 53 combined punt and kick returns. He finished his rookie season as WR25 with 199 PPR points, better than all but one (Michael Thomas) of the 31 drafted WRs in 2016.

In his sophomore season, Hill appeared in 15 games, starting 13 of them. He finished his season with 75 receptions on 105 targets for 1,183 yards and seven touchdowns. In addition, he had 17 carries for 59 scoreless yards. Hill made his first appearance in the top-12 finishing as WR9 with 239.2 PPR points.

In his third season with Patrick Mahomes as his QB, Hill exploded for 1,479 receiving yards and 12 touchdowns on 87 receptions. Hill was WR3 with 328 points and was looked at as one of the top WRs in fantasy regardless of format.

Prior to the 2019 season, Hill had a difficult offseason. Word leaked out on day two of the 2019 draft that Tyreek Hill was the focus on an ongoing child abuse investigation that involved his son. The investigation led to the Chiefs drafting of WR Mecole Hardman in round two and Hill was suspended from all team activities shortly there after. Tyreek Hill fell in ADP, and many of his dynasty managers traded him away with the thought he was facing a lengthy suspension, and the possibility that he would never play again.

The NFL announced in July that Hill would not be disciplined because the league felt he did not violate the league’s personal conduct policy. Hill bounced back in ADP and plenty of Hill’s dynasty managers celebrated the buying low of a top-5 WR. In September, Hill signed a three-year, $54 million extension, and went on to finish as WR32 in an injury impacted season in which he appeared in only 12 games.

Last season Hill came flying out of the gates scoring a touchdown in each of the first five contests. After Week 5, Hill sat as WR6 averaging 18.7 PPR points a game. All in all in 2020, Hill scored at least one touchdown in all but 3 games. His 87 catches matched his career high and his 1,279 receiving yards were second behind his 2018 breakout season. Hill totaled 1,399 scrimmage yards and scored a career high 17 touchdowns on his 100 touches on his way to a WR2 finish.

When Tyreek Hill is healthy he’s a top-five receiver with potential to be the best in the game. He showed us all this last season averaging 21.1 PPR points per game. The truth is that Hill is the most explosive receiver in the NFL thanks to his speed and his quarterback. As long as Hill avoids injury, he should give your fantasy team a legit shot to win week in and week out.

In 2021, the Chiefs WR depth chart has Tyreek Hill atop it, followed by inconsistent and unknown talent such as Mecole Hardman, Demarcus Robinson and Byron Pringle. The Chiefs should be a whole lot of Hill and TE Travis Kelce this season. In addition, Kansas City has a very nice fantasy football schedule this season; a schedule that includes Las Vegas (twice), Philadelphia, Tennessee, Dallas and Cincinnati, all teams with below average secondaries, makes Hill’s case for WR1 overall a legitimate one.

Post 2021, the value for Hill remains high and he should be in the top 5-10 in dynasty ADP conversation. He will be 28 years old entering the 2022 season, but any WR with Hill’s skillset and Patrick Mahomes as his QB should be elite regardless of the late 20s age range.

I currently have Tyreek Hill ranked ranked 10th overall, and he is my 5th ranked WR in my 1QB start-up PPR rankings. The RotoHeat consensus rankings has Hill one spot higher at 9. The DLF consensus ADP of 8 overall aligns with where the RotoHeat consensus and my ranks fall. The DLF consensus ranking of WR3 is a little high. I am a believer in the talent of Tyreek Hill, but in dynasty I am not comfortable ranking him ahead of A.J. Brown, D.K. Metcalf and Justin Jefferson. I currently have Devante Adams ahead of Hill for the time being. That very possibly changes as we near the start of the season.

Trading for Hill prior to the 2021 season is an expensive venture. His value is at sky high, as it should be. Buying him at his current price tag doesn’t offer much in the terms of a positive return on investment. Tyreek Hill is the definition of a buy-high WR.

Acquiring Tyreek will likely cost an early first rounder plus. The plus is likely going to be another first of a high level established asset. As high as I am on Hill, I would caution those on trying to buy and suggest that only the truest of contenders should attempt this transaction.