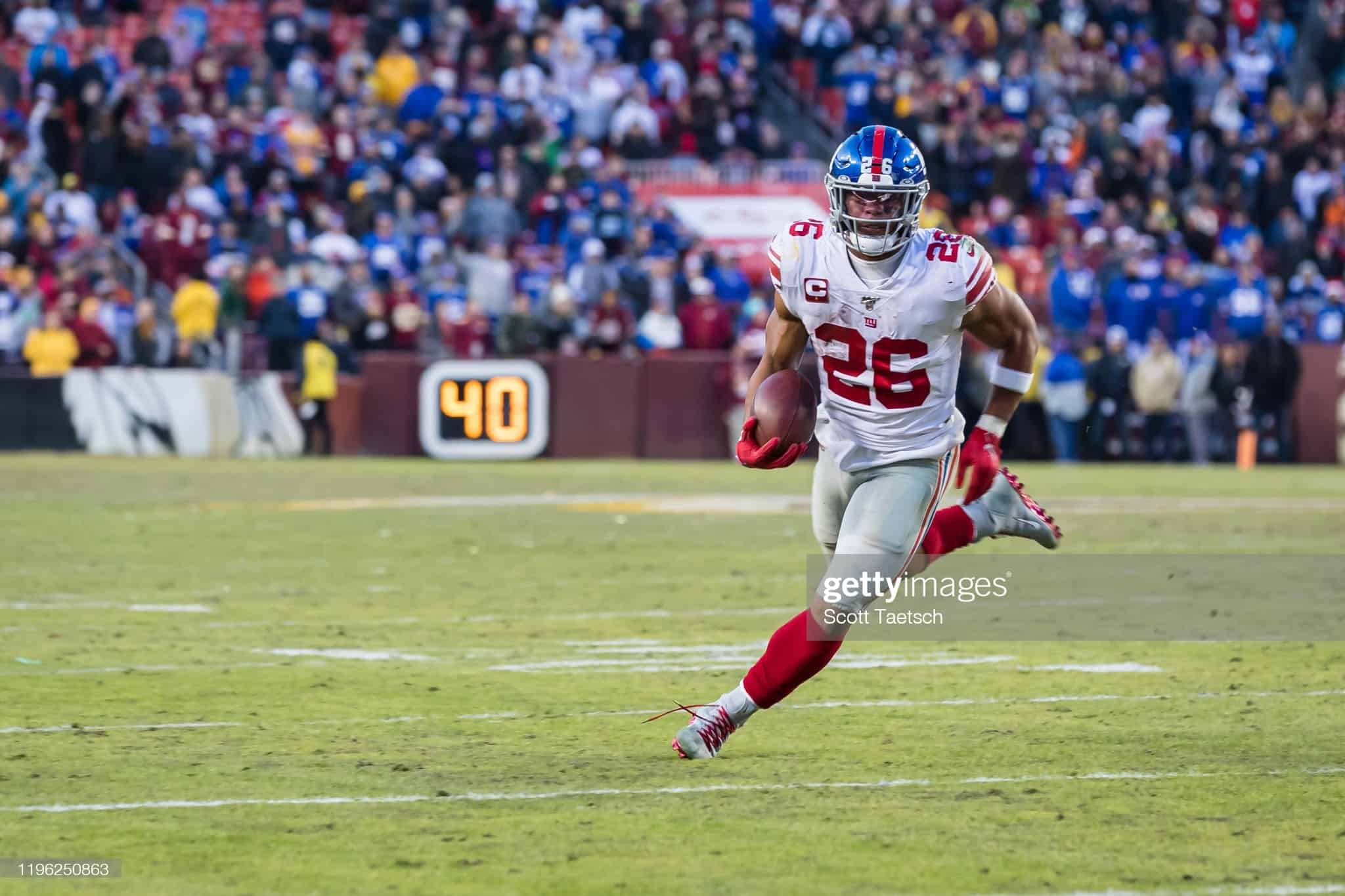 Penn State RB Saquon Barkley was selected by the New York Giants in the first round (2nd overall) in the 2018 NFL Draft. Barkley became the highest drafted running back since Reggie Bush was selected 2nd overall by the New Orleans Saints in 2006. Ian Rapoport reported that the Cleveland Browns were strongly considering drafting Barkley first overall, which would have made him the first running back since Ki-Jana Carter in 1995 to go first overall.

Barkley spent three seasons at Penn State, appearing in 38 games for the Nittany Lions. In those 38 games, Saquon totaled 3,843 yards and scored 43 touchdowns on 671 carries. In addition to his work on the ground, Barkley added 1,195 yards and eight more touchdowns on 102 receptions.

The hype train for Saquon Barkley leading up to the 2018 season was out of control and full steam ahead, downhill, and about to come off the tracks. Entering Dynasty rookie drafts trying to trade for the 1.01 was near impossible. Turns out the hype was warranted, as Barkley finished his rookie season with 1,307 rushing yards and 11 touchdowns on 216 carries. He added 721 yards on 91 receptions and 4 more scores. Saquon averaged 5.8 yards per touch in his rookie season and averaged 24.1 PPR points a game. Saquon Barkley was the 2018 NFL Offensive Rookie of the Year and finished as the RB1 overall, .3 points ahead of Carolina Panthers’ RB Christian McCaffrey.

After a successful rookie campaign, Barkley entered his sophomore season atop 1QB ADP. He started off his 2019 season with a combined 274 yards and two touchdowns in his first two games. After two weeks, Barkley was sitting at RB6. During the Giants’ Week 3 contest with Tampa Bay, Saquon suffered the dreaded high ankle sprain and he was expected to miss four to eight weeks as a result. Saquon beat the odds and was back on the field after missing just three games. From Week 7 through the end of the season, Barkley totaled 766 rushing yards, 364 receiving yards and he scored 7 touchdowns.

The 2019 numbers were decent for sure but not the production we had become accustomed to in Barkley’s 18 games prior to the ankle injury. Prior to the injury Saquon averaged 127.88 scrimmage yards and .94 touchdowns a game. In the ten games post injury, he averaged 113 scrimmage yards and .7 touchdowns a game. Saquon was not 100% after that injury and still put up numbers most running backs would be thrilled with. In 13 games he finished as RB10 with 244.1 PPR points. His 18.8 points per game average was 7th best.

Coming into the 2020 season, Barkley’s start-up ADP slid back to 2 overall and there was an expectation that we would see more 2018 Barkley and less 2019 Barkley now that he was 100% healthy again. His first week was a disaster as the Pittsburgh Steelers dominated the line of scrimmage and held Saquon to 6 yards on 15 carries. Saquon add 60 yards on 6 receptions. It was by far the worst game of his career. In Week 2 facing the Chicago Bears, the situation got even worse as Saquon tore his ACL on his 4th carry of the game and was lost for the reminder of the 2020 season. His third season was over, and he finished the season as RB120 with 15.4 PPR points.

This Spring the Giants surprised nobody by picking up the 5th year option on Barkley’s contract. He is expected to be fine coming off last year’s torn ACL, and he should be ready for training camp. If he’s healthy as expected then Barkley should once again be considered a first-round draft pick in all 1QB Fantasy leagues, and he will likely be selected in the first five overall picks. After all, he still has the potential to be the overall RB1 in all fantasy leagues in 2021.

Prior to 2020, Barkley scored at least 20 PPR points in 16 of his first 29 games and failed to reach 13 PPR points just five times over that span. He should remain the focal point of the Giants offense, and hopefully he’s healthy for all 17 games this year. There are some, however, that want to slap the “injury prone” tag on the Giants’ RB.

As noted, Barkley was a superstar in his rookie year, and he got off to a similar start in 2019 in his first two games of that season. The problem is he hasn’t been able to stay healthy since. Add to that the fact he hasn’t been quite the same player with Daniel Jones under center instead of Eli Manning.

In nine complete games with Jones, Barkley has averaged more than 109 yards per game, but his targets per game (6.1) have been about 20% below what he saw from Eli Manning, and he’s only scored five touchdowns in those nine games. Barkley has also been a less efficient rusher. In 20 games started by Manning, Barkley averaged 5.19 yards per carry. The average has fallen to 3.81 in games started by Jones.

I am not concerned with the past injuries or his history with his two QBs. Barkley has been injured in two of his previous seasons, sure, but he is not injury prone. Players get hurt. It happens, and it can happen to any player at any time. I fully expect Barkley to be a top-5 RB in 2021 and remain there for the next few seasons.

I currently have Saquon Barkley ranked 2nd overall, and he is my 2nd ranked RB in my 1QB start-up PPR rankings. The RotoHeat consensus rankings has Saquon ranked at 2 as well. The DLF consensus ADP of 3 aligns with where the RotoHeat consensus and my ranks fall. The DLF consensus ranking of RB3 does as well. I remain optimistic that Barkley will stay healthy and deliver. I also believe that the Giants’ offense will be better and possibly the best they have had during Barkley’s tenure. Barkley, despite all the question marks surrounding him, remains a top 5 back for me.