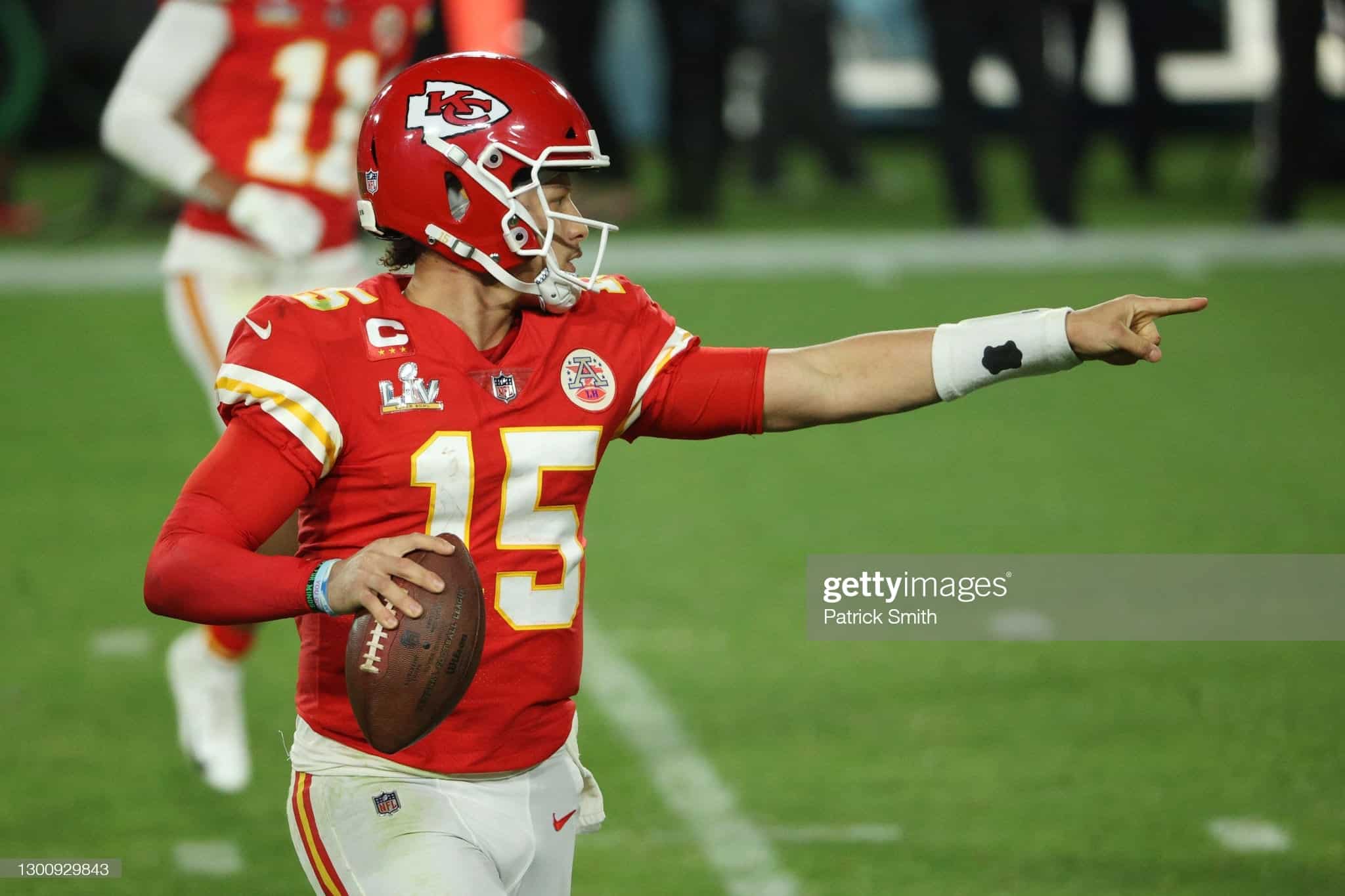 Texas Tech QB Patrick Mahomes was selected by the Kansas City Chiefs with the 10th overall selection of the 2017 NFL Draft. With the pick, the Chiefs made Mahomes the 2nd quarterback selected in the draft. The Chiefs moved up in the draft to select Mahomes. The Chiefs gave up picks 27, 91, and their 2018 1st round pick in a trade with the Buffalo Bills to move up to pick No.10.

Patrick Mahomes spent three years at Texas Tech, appearing in 32 games for the Red Raiders. In those 32 games, Mahomes totaled 11,252 yards passing by completing 857 of his 1,349 attempts. 93 of his completions were touchdown passes. His best season was his final season in 2016. Mahomes was 388/591 for 5,052 yards with 41 touchdowns and 10 interceptions in 12 games played. During the 2016 season, Mahomes set two NCAA records: single-game yards passing: 734 and single-game yards total offense: 819.

Mahomes spent his rookie season in Kansas City on the bench behind starter Alex Smith. K.C. rested Smith in Week 17 and Mahomes went 22 of 35 for 285 yards with interception in his first professional start. Prior to the start of the 2018 season, Kansas City traded Alex Smith to Washington paving the way to the starting role for their sophomore QB.

When all was said and done, Mahomes completed his first season as a starting QB with 5,097 passing yards and 50 touchdown passes. In the process, he became the 11th QB to top 5,000 passing yards in a season and the third to throw 50 or more touchdown passes. He joined Peyton Manning as the only QB in league history to accomplish both in the same season. Mahomes finished as QB1 with 417.08 fantasy points, a whopping 63.16 points ahead of QB2 Matt Ryan.

Entering the 2018 season, Patrick Mahomes had an ADP of 93 and QB8. Entering 2019, his ADP jumped to 23 and QB1. He finished the 2019 season as QB8, and his 20.86 average points per game was 4th best of all QBs with 9 or more starts. His numbers came in 14 games, and are especially impressive considering he sprained his ankle in Week 1 and suffered a dislocated patella in Week 7 against the Denver Broncos. He played through the ankle injury, but the knee injury forced him to the sidelines in Weeks 8 and 9. Patrick Mahomes is likely the only QB on the planet that could disappoint by throwing for 4,031 yards and 26 touchdowns in a single season.

In 2020 he made his 32nd career start, and in the process set the NFL record for most touchdown passes in a QB’s first 32 starts with 79. In these 32 starts, he failed to throw for at least one touchdown on only three occasions. He concluded the season at QB4 with 380.4 points in 15 games. Had he played the 16th game of the season at his average of 25.36 points per game, he would have finished as QB1, .7 points ahead of Bills’ QB Josh Allen.

As we prepare for the 2021 season, Mahomes is rightfully ranked as the top QB in fantasy football. You’ll find conflicting rankings at the QB position among the consensus rankers, but despite their differences in their rankings, the overwhelming majority will have Mahomes sitting atop their list.

With the schedule expanding to 17 games this season, it is not a stretch to see Mahomes reach the 5,000+ passing yards and 50+ TDs in a single season once again. Peyton Manning’s league records of 5,477 passing yards and 55 TDs are well within reach.

When we look past the 2021 season, there is no reason to anticipate that Mahomes will not be the top ranked QB once again. He has proven time and time again to be head and shoulders above all at his position in real life football, and his fantasy value is tops as well. Mahomes will be 26 entering 2022, and he has the ceiling, barring injury, of being the top QB in both real life and fantasy for another decade.

Patrick Mahomes is the best quarterback in football, and as a result he is one of the most sought after assets regardless of your league’s scoring and roster settings. The fantasy points I have shared in this article are in 4-point per passing leagues, while in 6-point per passing leagues the numbers are clearly even better. If you play in Superflex leagues, Mahomes should be the consensus top ranked player and should come off the board with the first pick of startup drafts. In 1QB leagues, where he is drafted is up for debate.

I currently have Mahomes ranked 28th, and he is my top ranked QB in my 1QB start-up PPR rankings. The RotoHeat consensus rankings has Mahomes a little lower at 34th. I don’t have official Superflex rankings, but if I did, Mahomes would be my top ranked player.

The DLF ADP of 29 aligns with my rankings, as does his QB1 ranking. I prefer to wait on QB in the 1QB format, however the exception to the rule is Patrick Mahomes. If he falls into the third round (which, he rarely does), I will draft him.

Trading for Mahomes is another story all-together. In a 1QB league it takes a lot, while in a Superflex or two QB leagues it’s near impossible getting value if selling and equally as hard to give up what it takes if buying. In the 1QB format, buying Mahomes for a draft pick should cost you the 1.03 or higher. If dealing player for player, you are looking at a top positional asset to make a deal. In SF, it’s way more complicated. In that format you are looking at the 1.01 plus another first and likely another top asset–minimum. It’s hard to sell Mahomes in Superflex, and it’s even harder to buy him.