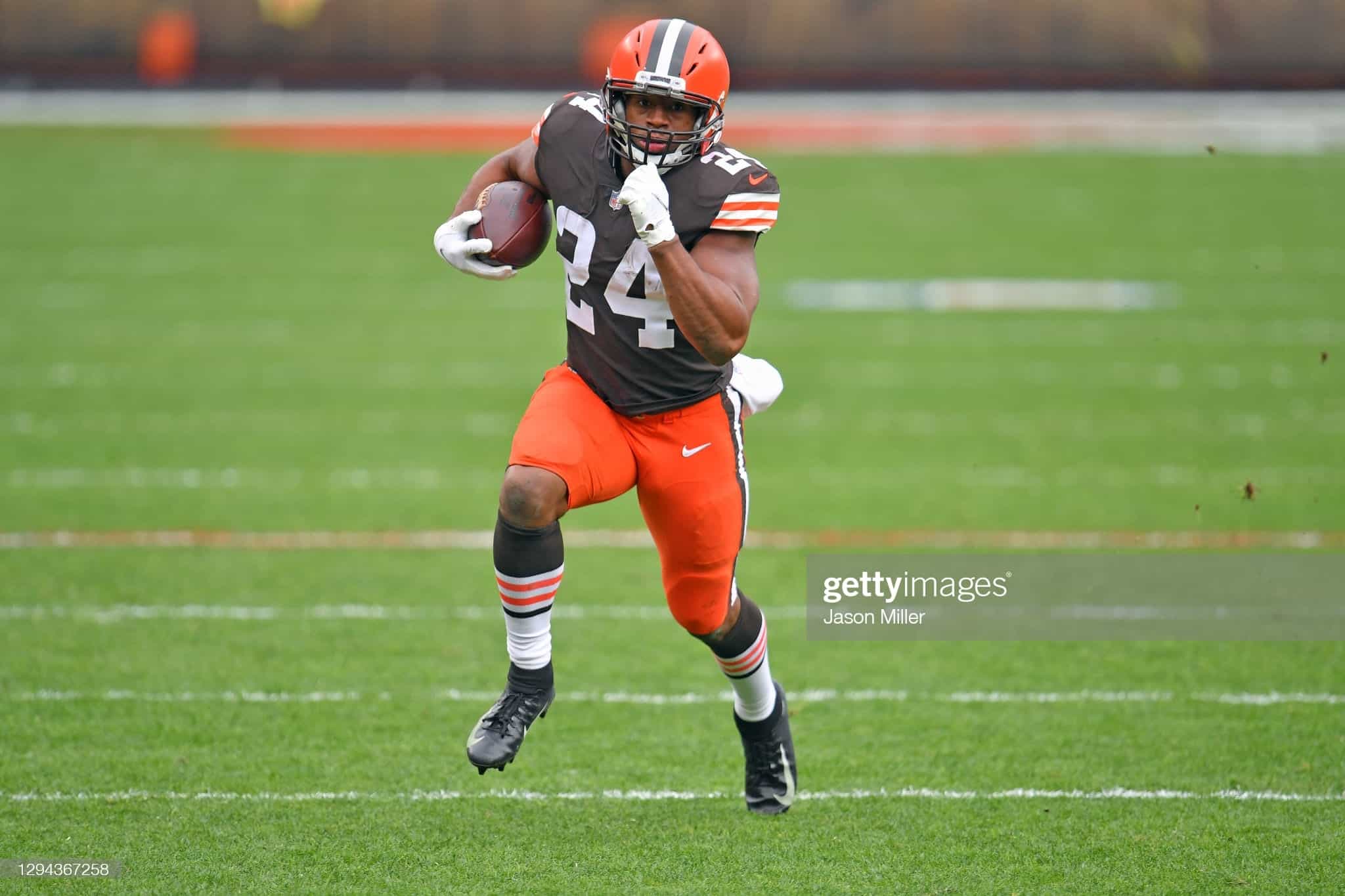 The Top 50 Series continues with the profile of Cleveland Browns RB Nick Chubb.

Georgia RB Nick Chubb was selected by the Cleveland Browns in the second round (35th overall) in the 2018 NFL Draft. With the pick, the Browns made Chubb the 3rd running back selected in the draft after both Saquon Barkley and Rashaad Penny who were selected in round one.

Chubb spent four seasons at Georgia, and in his 47 games with the Bulldogs, totaled 4,769 yards and scored 44 touchdowns on his 758 carries. In addition to his work on the ground, Chubb added 31 receptions for 361 yards with 4 touchdowns. Chubb’s college totals would have been even more impressive had he not been limited six games in his sophomore season due to a knee injury.

Chubb’s best season was his freshman season. Chubb entered the season as a backup to Todd Gurley and took over as the starter after Gurley was suspended for violating NCAA Rules. In his first start, he rushed for 143 yards on 38 carries and the next game, he rushed for 202 yards and two touchdowns on 30 carries. Chubb finished his freshman season with 1,547 rushing yards, good for second in the SEC, despite only starting eight games. Chubb was expected to enter the 2017 NFL draft , but instead decided to return to Georgia for his his senior season.

Chubb entered his rookie season, third on the Browns depth chart behind veterans Carlos Hyde and Duke Johnson. During the first six weeks of the 2018 season, Nick Chubb had 16 carries for 173 yards and two touchdowns. He sat at RB57 with 29.3 PPR points. Prior to the Browns week 7 contest against Tampa Bay, the Browns dealt Carlos Hyde to the Jacksonville Jaguars, paving the way for Chubb to be the starting running back.

In Chubb’s first game as the starter he had 18 carries for 80 yards and a touchdown. He went on to rush for 743 yards and 5 touchdowns, with 20 receptions for another 149 yards and a pair of scores in the Browns remaining 9 games. He wrapped up his rookie season with 1,145 scrimmage yards and ten touchdowns on 212 touches. From week 7 though 17, Nick Chubb was RB8 and finished the season as RB17 with 194.5 points.

Prior to the start of the 2019 season, the Browns signed former Kansas City Chiefs RB Kareem Hunt. Due to the ongoing investigation from the NFL into the assault allegations against Hunt, he was placed on the Commissioner’s Exempt list after signing his contract. Hunt received an eight game suspension and made his Browns debut in Week 10. In the first 9 weeks of the season, Nick Chubb was RB6 averaging 18.9 PPR points per game. From Week 10-17, Chubb was RB15 averaging 13.0 points a game. Nick Chubb posted career highs in every possible statistical category and ended the season with 1,772 scrimmage yards and eight touchdowns on 334 touches.

Many fantasy analysist myself included wondered how the Browns backfield would be deployed in 2020. The Browns had yet another new Offensive Coordinator (Alex Van Pelt), and Head Coach (Kevin Stefanski, so predicating the offense wasn’t as straight forward as it would be for a team retuning the same personnel and coaching staff. What was expected was for Stefanski to bring his run first approach with him from Minnesota. I faded Chubb in my rankings because of Kareem Hunt, and I wasn’t alone.

Nick Chubb missed four games last season due to a knee injury. He was injured early in Week 4. In the first three weeks of the season, Chubb had 58 touches compared to Hunt’s 47. Chubb was RB8 and Hunt RB13 after the first three weeks of 2020. Chubb returned in week 9 and out touched Hunt 146-103 the remainder of the season. From week 9-17, Chubb was RB6 and Hunt RB18.

Overall on the season Chubb and Hunt finished back to back in the standings with Hunt at RB10 and Chubb at RB11. Chubb averaged 17.3 PPR points a game compared to Hunt’s 13.7. The Kevin Stefanski offense can support multiple running backs, no doubt but its clear that Nick Chubb when healthy is the primary back in Cleveland. Fading him was and is a mistake.

Nick Chubb may very well be the best pure real life running back in the NFL today. When it comes to fantasy he is still a top back, but the lack of catches lowers his ceiling. Even with the limited targets, Chubb still possesses the abilty to give you a top-12 season. Last season he was the only back in the top-15 to play in fewer than 14 games, and the only 1,000-yard rusher to have less than 200 carries (191). Chubb and Derrick Henry were the only two backs in the top-15 with less than 20 receptions.

Last season Nick Chubb averaged a touchdown per game and was the only double-digit touchdown scorer to do so in under 14 games. The 2021 season should be even better for Chubb under the second year of head coach Kevin Stefanski. Stefanski’s run-oriented approach and zone-blocking scheme is tailor-made for Nick Chubb. Barring injury I fail to see a reason that Nick Chubb won’t deliver his fantasy managers yet another top-12 season.

Looking past the 2021 season, Nick Chubb is scheduled to be a free agent in 2022. Kareem Hunt is under contract for one more season and hits free agency in 2023. One of two things happens for Chubb, he either stays in Cleveland or his hits the market. Either way Nick Chubb is a back that will carry top-12 upside regardless of the team in which he runs for.

I currently have Nick Chubb ranked ranked 11th, and he is my 6th ranked RB in my 1QB start-up PPR rankings. The RotoHeat consensus rankings has Chubb one spot lower at 12. Both the DLF ADP of 11 and the rank of RB7 mirror my current rankings.

If you are looking to bolster your roster and wish to buy Nick Chubb, you are likely going to have to pay up to make it happen. Chubb is the type of fantasy asset that you should feel comfortable paying up for however. He has a high floor and a high ceiling. If you are simply looking to move picks for him it will require several. Chubb value is currently the 1.01 plus in 1QB formats. If you are looking to the future and 2020 selections, I suggest that the price of two first round selections preferably with one being in the top half of the first round will be required.