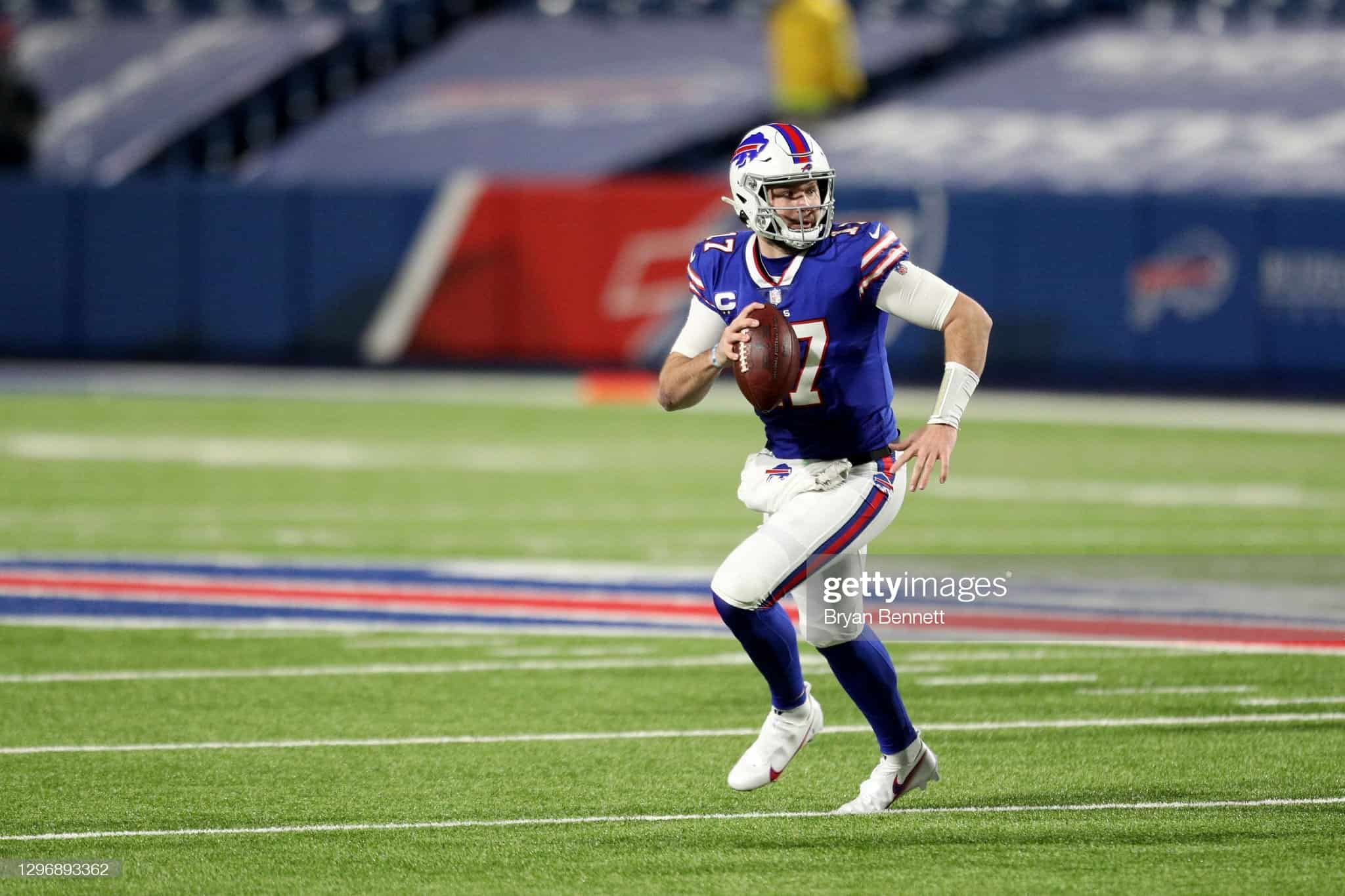 The Top 50 Series profiles individuals currently occupying a spot in the top-50 2021 Startup Dynasty ADP over on DLF. In Dynasty, there are certain players that tend to hold more uncertainty or are more divisive than others. The Top 50 Series takes a deep dive into the player’s career performance to date as well as his dynasty outlook for 2021 and beyond. We continue the Top 50 Series with Buffalo Bills’ QB Josh Allen.

Wyoming QB Josh Allen was selected by the Buffalo Bills with the 7th overall selection of the 2018 NFL Draft. With the pick, the Bills made Allen the 3rd QB selected. Allen was one of five quarterbacks selected in the first round. Baker Mayfield went first overall and Sam Darnold came off the board at number 3. After Allen was selected, Josh Rosen went to Arizona and Baltimore selected Lamar Jackson. At the time of the draft it appeared that the Bills over-drafted Allen. Three years later it appears they nailed their first round selection.

After one season in Junior College at Reedley College, Josh Allen spent three seasons in Wyoming. During his time as the Cowboys’ QB, Allen appeared in 27 games, starting 26 of them. He completed his college career with 365 completions on 649 attempts for 5,066 yards and 21 touchdown passes. In addition to his passing stats, Allen added 767 yards on 237 carries and scored 12 touchdowns. His best season came in his 2016 sophomore season. He threw for 3,203 yards and 15 touchdowns and ran for an additional 523 yards and seven scores.

Josh Allen has appeared in 44 games for the Bills and has been their starting QB for 43 of them over the past three seasons. In his rookie season, Allen took hold of the starting job in Week 2 and struggled. During his five starts in Weeks 2-6, Allen completed 55% of his passes for 758 yards, 2 touchdowns and 5 interceptions. After his Week 6 start, Josh Allen has sat for more than a month with a sprained elbow ligament. He returned to the lineup in Week 12 and the struggles continued. In his final six starts he completed 52% of his attempts for 1,242 yards, 8 touchdowns and 7 interceptions.

He concluded his rookie season as QB21 with 208.06 fantasy points. He ran for 631 yards and 8 scores as a rookie. His rushing totals amounted to 109 fantasy points–53% of his seasons total. In his second season, Allen improved to QB6 and scored 297.56 points. His completion percentage was once again near the bottom of the league at 58.8%.

Josh Allen finished as a top-12 QB for the same reason he was a viable QB as a rookie–his rushing ability. In year two, Allen ran for 510 yards and scored 9 times. Those 106 fantasy points were 35% of his total. In his first 28 games as a pro, Allen totaled 215 fantasy points on the ground versus 219.16 through the air. His completion percentage in year two ranked 32nd. The running joke was Josh Allen could fire a ball threw a keyhole, but the only problem is he would miss the door.

In 2020, Josh Allen became an elite QB. He continued to produce fantasy points with his legs. He ran for 421 yards and scored 8 times. What made the difference was his passing game. Allen in his two previous seasons had yet to produce a 300 yard passing game. In the first three weeks of the season he topped 300 yards in all of them, and in Week 2 he threw for over 400 yards. At the end of the season, Allen had gone over 300 passing yards 8 times and over 400 yards twice.

One of my worst calls in 2020 was the ranking of Josh Allen outside the top-12 QBs. I saw his rushing totals declining, which they did, but the man made me look foolish with his arm. The reality is he’s a dual-threat quarterback in a pass-happy offense, and he should continue to post dominant stats. He did lose John Brown this offseason, and the addition of Emmanuel Sanders should help offset that. Stefon Diggs, Cole Beasley and hopefully the emergence of Gabriel Davis should help Allen continue to excel. He should once again be one the best fantasy quarterbacks in 2021.

At 25 years of age with a plethora of talent surrounding him, Allen looks like the type of QB you can build your rosters around. His passing game has evolved to career high levels, and his rushing totals, although down, remain extremely relevant. I see Allen as a top-5 QB for many years to come. The days of me ranking him outside the top-12 are long, long gone. He will come off the board within the top 3 QBs in your start-up drafts, and in a Superflex league he should be drafted early in round 1. In 1QB formats where fantasy mangers tend to be more patient with their QB selections, I would anticipate Allen hearing his name called in the round 4-5 range, hence his current ADP.

Allen is one of the top dual threat QBs in the league, and as I mentioned in my review of Cardinals QB Kyler Murray, dual threat QBs are worth their weight in gold. I currently have him ranked 54rd, and he is my 3rd ranked QB in my 1QB start-up PPR rankings. Allen is one spot behind my No.2 QB Kyler Murray. The RotoHeat consensus rankings have Josh Allen at 53rd overall.

The DLF ADP of 48th is likely the right range. I have Allen a half round lower due to personal preference more than anything. I would prefer not to take a QB in the first four rounds of a 1QB start-up league draft. In a Superflex start-up, Allen in my opinion is at worst a top-4 pick. If you have yet to complete your rookie draft and are looking to move Allen for some draft picks, I would be willing to move Josh Allen for late round first or higher. When it comes to Superflex, it would take the 1.01+ to make me even consider it.

ABOUT US
Whether you play NFL redraft, dynasty, IDP, or devy, RotoHeat is your site for fantasy info!
Contact us: [email protected]
FOLLOW US
© ROTOHEAT LLC © 2019-2022 | Powered by: BRANDERMIND
Email: [email protected]om