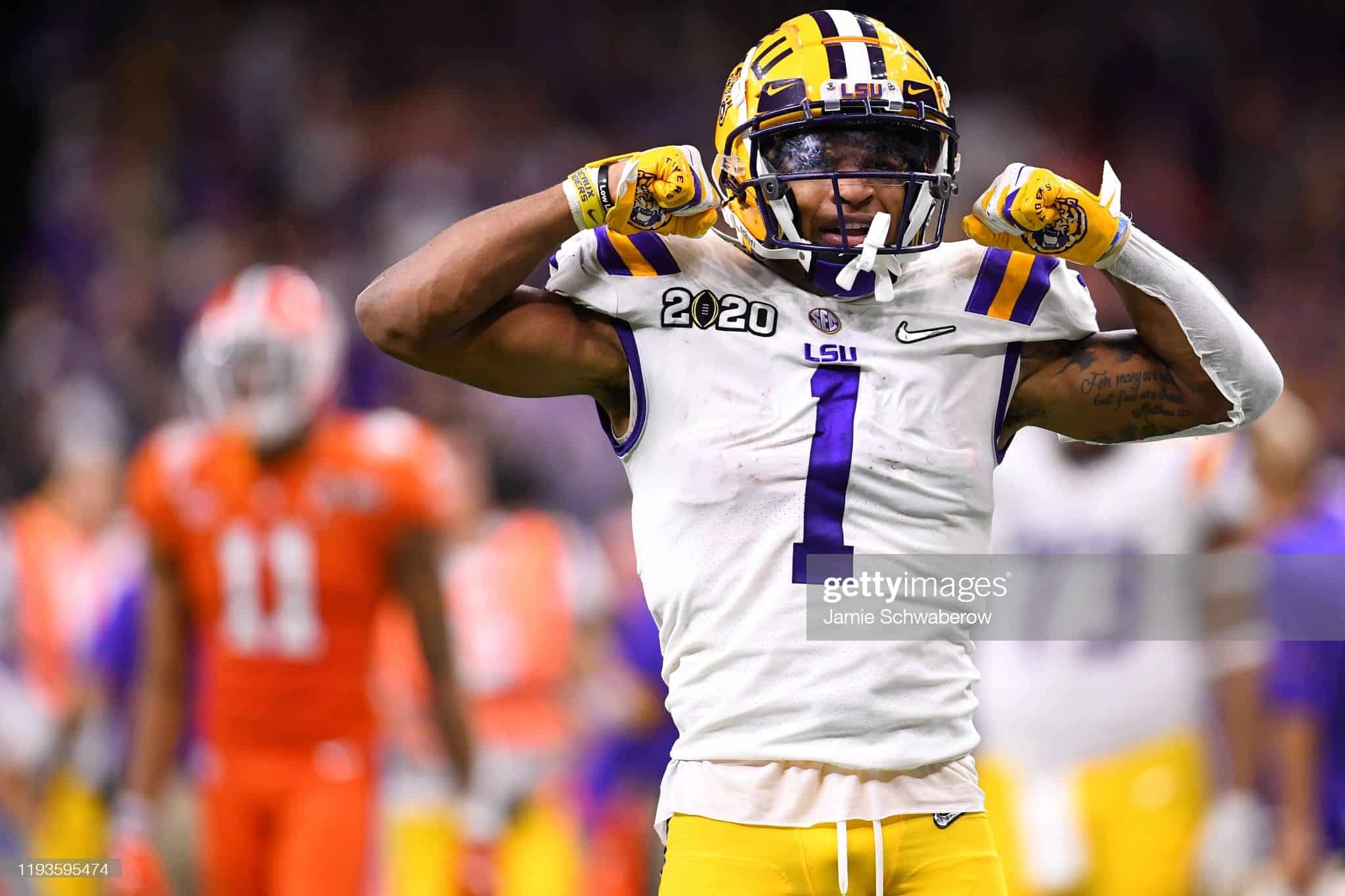 The Top 50 Series continues with the profile of Cincinnati Bengals’ WR Ja’Marr Chase.

Ja’Marr Chase spent three seasons at LSU, and in those three seasons, Chase appeared in 24 games for the Tigers. He totaled 2,093 yards and 23 touchdowns on his 107 receptions. His best season was his 2019 sophomore year in which he totaled 84 receptions for 1,780 yards and 20 touchdowns. The yardage and touchdown were both SEC records. He won the Biletnikoff Award and was a unanimous All-American as a sophomore in 2019. Chase opted out of the 2020 season in preparation for the NFL draft.

Ja’Marr Chase was Joe Burrow’s go-to target in LSU’s record-breaking offense in 2019. That’s impressive when you consider the offense also had Justin Jefferson, Terrace Marshall, and Clyde Edwards-Helaire. The fact that Chase rose up above his teammates (two of which were juniors) was our first indication that Chase is a special talent. He was the first player in LSU history to surpass the 2,000-yard mark in first two seasons as a Tiger, and he has eight 100-yard games in his career with three of those going over the 200-yard mark on his resume.

Chase is the prototypical “X” receiver who can win one-on-one or with safety help over the top when lined up on the outside. He reportedly ran an unofficial 4.38 40-yard dash at his LSU pro day, and in addition to having game speed, what makes Chase so special is his explosiveness, strength, and physicality as a route runner and in contested-catch situations. There is no such thing as a sure thing, but Ja’Marr Chase is pretty darn close.

The Bengals are likely going to throw the ball a ton in 2021. Joe Burrow was on pace to attempt 687 passes last season (in 17 games). Now they might not throw at that pace, but they will still be forced to throw a lot. The defense, while improved, is still going to struggle. This should require the offense to play catch-up most weeks. That’s ideal for fantasy purposes, especially for players in the passing game. Tee Higgins was sensational as a rookie, but Ja’Marr Chase is now the WR1 for the Bengals. Chase will eat up the majority of the 34.5% of vacated targets left by A.J. Green.

We used to talk about the third year breakout WR in fantasy. Fantasy managers have grown to become impatient due to the talent that has entered the league in recent years. The dynasty community expects these top ranked rookie WRs produce in year 1. Regardless, if theses expectations are warranted or not, no receiver is more ready from a technical and physical standpoint than Chase to live up these expectations as a rookie.

After the 2021 season, I would expect Chase to be talked about in the same way WRs like AJ Brown, DK Metcalf, Juju Smith-Shuster, and Justin Jefferson were after their rookie seasons. The link to Jefferson is aggressive, yet understandable. After all, in 2019 the two shared a role in the LSU offense, and it was Chase that was breaking records. Should Joe Burrow bounce back to his 2020 pre-injury form, and Chase is as projected, then these are two top-5 players at their positions for years to come.

Ja’Marr Chase is the top ranked WR in this draft class and quite possibly the top ranked rookie. I have Chase ranked second, but he is much, much closer to number one than he is to three.

I currently have Ja’Marr ranked 35th, and he is my 16th ranked WR in my 1QB start-up PPR rankings. The RotoHeat consensus rankings has Chase at 28th. The DLF ADP of 30 aligns with my rankings, but his WR10 ranking does not. I feel it is too aggressive to rank the rookie this high. We have been spoiled by rookie wide receivers in recent years, and as a result Dynasty mangers are looking for top-12 seasons in year one. You may very well get that from Chase in 2021, but I for one am not counting on it.