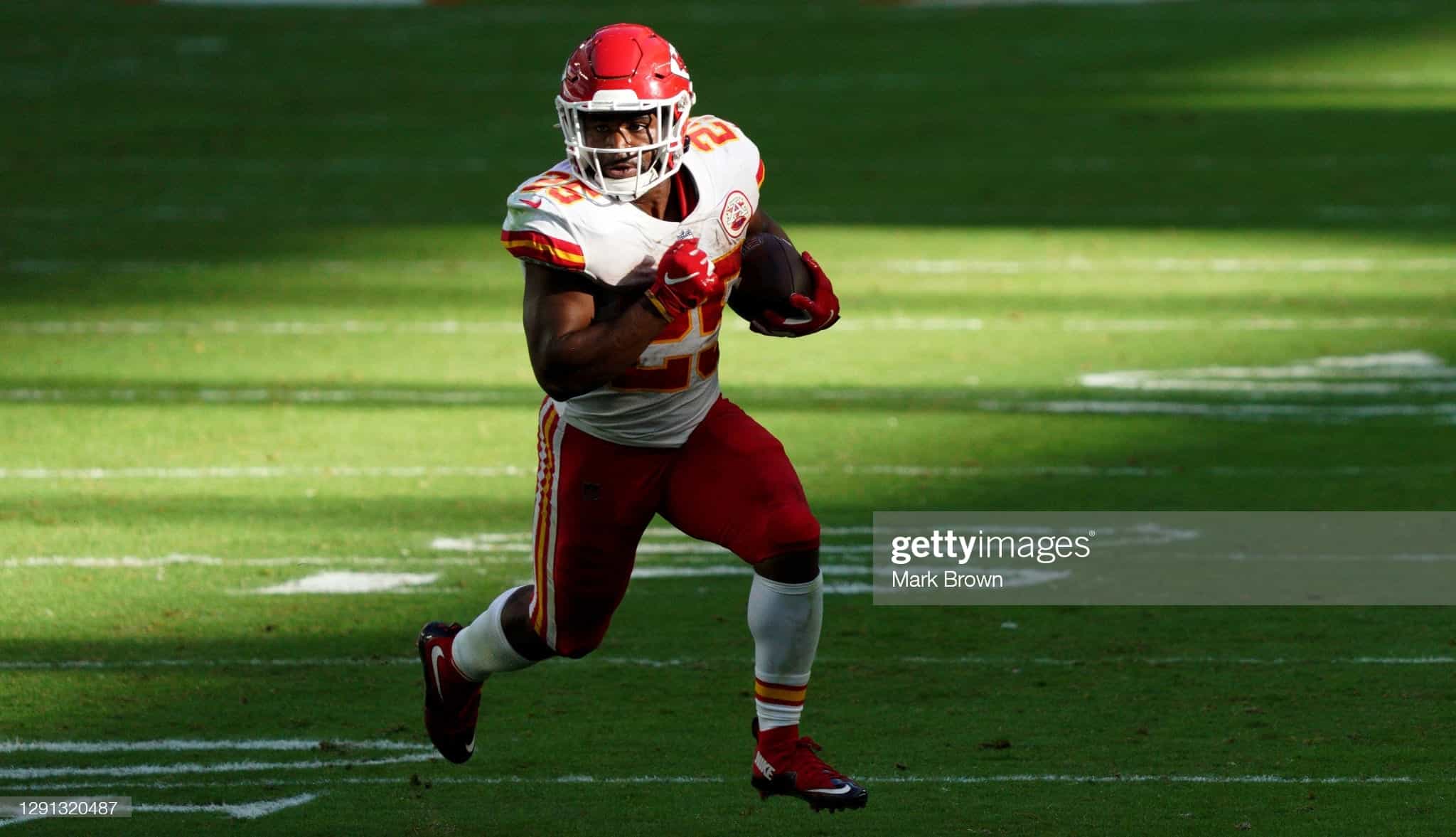 LSU RB Clyde Edwards-Helaire was selected by the Kansas City Chiefs in the in the 1st round (32nd overall) in the 2020 NFL Draft. With the pick, the Chiefs made CEH the 1st running back selected in the draft, and the only back to be selected in the first round.

CEH spent three years at LSU, appearing in 38 games for the Tigers. In those 38 games, he totaled 2,103 yards on 370 carries and scored 23 touchdowns. In addition to his running stats, Clyde caught 69 passes for an additional 595 yards and one score. His best season came in his junior year in 2019, playing alongside QB Joe Burrow. CEH totaled 1,867 scrimmage yards and 17 touchdowns on 270 touches.

When the Kansas City Chiefs selected CEH, the fantasy community took notice. After all, pieces of the Chiefs highly potent offense are understandably highly sought after. Edwards-Helaire had a RB21 start-up ADP after being selected. In late July, fellow Chiefs RB Damien Williams opted out of the 2020 season due to the Covid-19 pandemic. As a result of Williams decision, CEH saw his start-up ADP soar to RB5.

In fairness to CEH, he was incredibly over-valued as a rookie and destined to disappoint for those that grabbed him at his bloated value. In addition to shooting up the start-up ADP ranks, he nestled in atop the rookie ADP ranks as well.

CEH kicked off his rookie season with 25 carries for 138 yards and a touchdown Week 1 versus Houston. In the process, he became the youngest player in NFL history to rush for at least 130 yards and a touchdown in his NFL debut. CEH was RB11 with 19.8 PPR points in his first professional game. He hit the century mark in rushing yards a second time with 161 yards versus the Bills in Week 6. These were his only 100+ yard rushing games in 2020. After the first six weeks, CEH was RB11 averaging 15.9 PPR points a game.

At the conclusion of the 2020 fantasy season, Clyde-Edwards Helaire had scored 176 PPR points good for a RB22 finish. Injury played into his lower than anticipated finish, and to a lesser degree, the mid-season addition of Le’Veon Bell.

CEH missed Week 13 due to illness, despite dressing for the game. In addition, he was injured during the Chiefs’ Week 15 win over the New Orleans Saints. He sustained hip and ankle injuries and missed the remainder of the regular season as a result. His rookie season ended with 803 rushing yards, 297 receiving yards and 5 total touchdowns on 217 touches. Entering Week 15, CEH was sitting as the 4th highest scoring rookie back and the RB13 overall. The reality is that CEH was over-drafted this season, injury or no injury.

One of the great things about participating in Dynasty Fantasy Football is there is always next year. If you drafted CEH at his ADP in a redraft format, my condolences. In dynasty formats, however, the chance for some return on investment remains plausible.

Simply put, I believe that CEH has a bounceback season in 2021. I don’t see a top-5 RB season coming, but I also don’t see a repeat of 2020. For starters, Damien Williams was released and Le’Veon Bell will not be brought back. According to Ourlads, the Chiefs current RB depth chart is CEH, Darrel Williams, and Darwin Thompson. Secondly KC identified the offensive line as an area to improve and did just that.

Last season CEH led the Chiefs in touches with 217, followed by Le’Veon Bell (67), Darrel Williams (57), and Thompson (34). Barring any additions to the backfield, CEH is the clear lead back in KC. On the O-Line, KC added former New England Patriots guard Joe Thuney, lured Kyle Long out of retirement, and are expecting both Laurent Duvernay-Tardif and Lucas Niang back in 2021.

Prior to the start of the 2020 season I wrote about the 21-year history of Andy Reid running backs. What I discovered was with the exception of Kareem Hunt, Reid’s rookie backs struggled, including Brian Westbrook and LeSean McCoy. In the case of McCoy, he finished his rookie season with 195 touches (40 receptions) for 945 yards and 4 TDs. He followed that up as a sophomore with 285 touches (78 receptions) for 1,672 yards and 9 scores. McCoy was RB32 as a rookie and RB3 in year two. This could mean absolutely nothing, and it could be extremely relevant. Either way, I am buying CEH this offseason.

Clyde Edwards-Helaire has a top-5 fantasy RB ceiling. I don’t think he gets there, but it is a realistic ceiling nonetheless. I do believe he is the Chiefs’ primary ball carrier, and I also believe he sees more than the 54 targets he saw as a rookie.

Last season CEH had 28 carries inside the opponents 20 yard line. He tuned those 28 carries into 85 yards and three touchdowns. Inside the opponents 10-yard line he was 15 for 13 yards and a score and inside the 5 he had 9 attempts for 3 yards. In the passing game he caught 3 of 6 targets for 20 yards and a touchdown. The improvement on the offensive line, combined with another year of experience, in my opinion leads to a dramatic improvement here.

I currently have CEH ranked 25th, and he is my 14th ranked RB in my 1QB start-up PPR rankings. The RotoHeat consensus rankings has CEH one spot lower at 26. My ranking of CEH is neither his ceiling or his floor. I believe I have him ranked somewhere in the middle of his range of outcomes.

The DLF ADP of 25 aligns with my ranking, and his RB16 ranking for the most part does as well. I would not hesitate to add CEH to my dynasty roster at the start of the third round, and if necessary, I may be inclined to grab him in the later portions of round two.

If you have yet to complete your rookie drafts and are looking to sell CEH, you should be setting the price at the 1.03 or higher in 1QB formats and the 1.05 in Superflex formats. After investing heavily in CEH a year ago, now is not the time to let him go at a discount. If you do move him, make sure you are getting market value at minimum on your return.