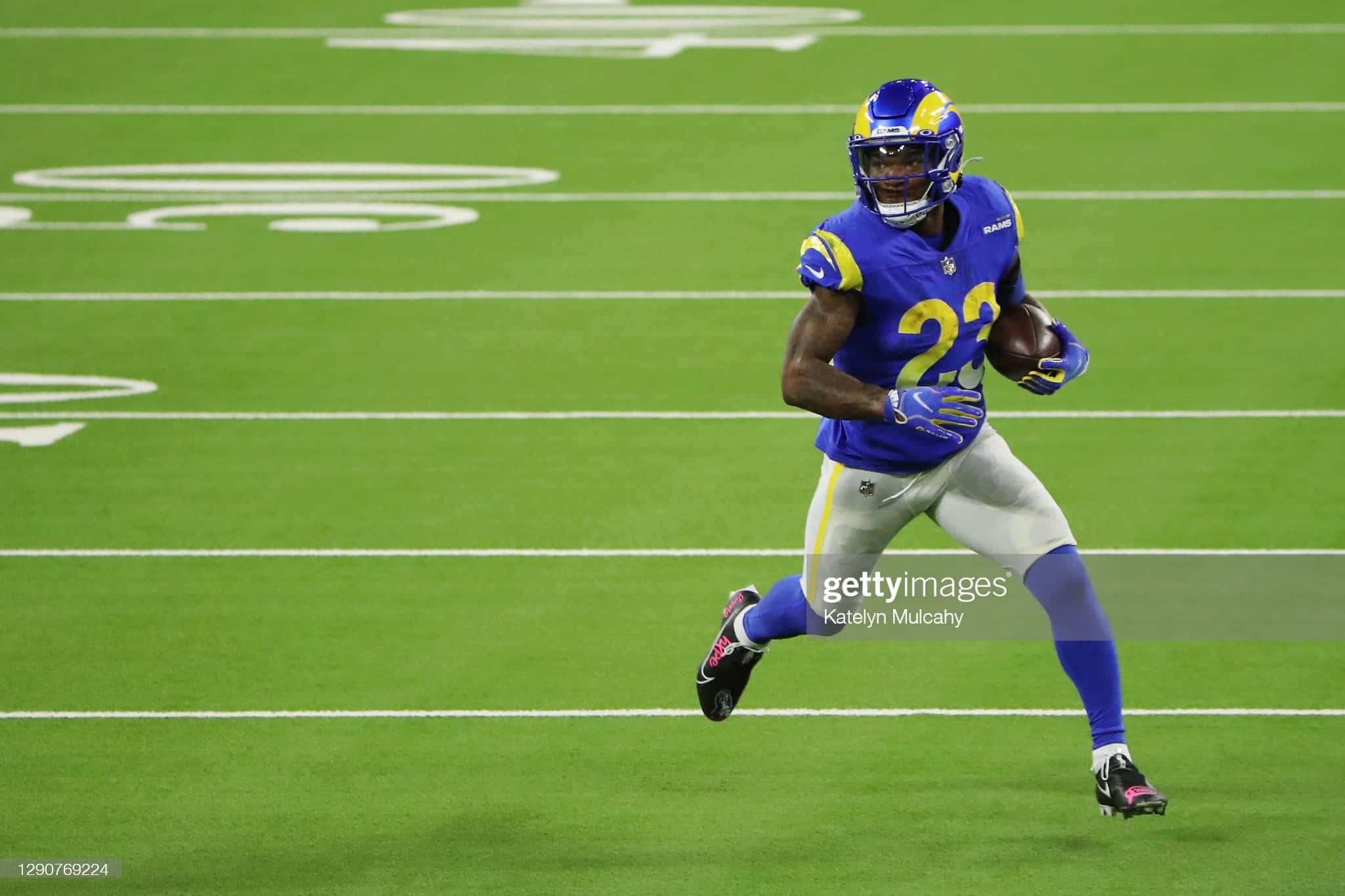 Florida Stare RB Cam Akers was selected by the Los Angeles Rams in the second round (52th overall) in the 2020 NFL Draft. With the pick, the Rams made Akers the 4rd running back selected in the draft. The 2020 running back class was a deep one. Clyde Edwards-Helaire, D’Andre Swift, and Jonathan Taylor were the only three backs to be selected ahead of Cam Akers.

Akers spent three seasons at Florida State, and in his 36 games with the Seminoles, totaled 2,875 yards and scored 27 touchdowns on his 586 carries. In addition to his work on the ground, Akers added 69 receptions for 486 yards with 7 touchdowns. His best season was his final one at FSU. Akers totaled 1,369 yards and 18 touchdowns on 261 touches. His 1,144 yards rushing in his final season set a Florida State record for the most in a single season.

Cam Akers rookie season was a tale of two seasons. Forgettable at the start and promising towards the end. Akers NFL debut was lackluster, 14 carries for 39 yards and he caught 1 pass for another four yards. In week two he suffered separated ribs and missed the following two weeks. He retuned in week 5 and turned 9 carries into 61 yards. Akers did not have another touch until week 8. After the first seven weeks of his rookie season he was stuck in a three headed running back committee and was RB81. His teammates Darrell Henderson and Malcolm Brown were RB21 & RB32.

Where Akers season took a positive turn was in week 12 where he saw a season high 21 touches and turned them into 73 yards and a touchdown. The following week he had an even larger workload (31 touches), and ran for 171 yards and caught another 23. Akers was RB10 with 21.4 PPR points. He finished the season as the Rams primary back and from week 13-17 he averaged 13.9 points per game.

In two post season games, Akers totaled 221 yards and two touchdowns on 46 carries. His playoff performance combined with his end to the season gives Akers fantasy managers a reason to be optimistic for his future.

Sean McVay gave Akers a workhorse role down the stretch in 2020. He averaged 21.5 carries and 2.8 targets per game while playing on 67% of the snaps in four games between Weeks 13 and 17. With Malcolm Brown off to Miami, and the upgrade at QB with the addition of Matthew Stafford the potential for a similar workload in 2021 is real. McVay refers to Akers as an every-down-back heading into his sophomore campaign, and he’s also shown a willingness to feed one guy. Todd Gurley was the overall RB1 and overall RB3 respectively in McVay’s first two years in Los Angeles.

Gurley averaged 329 touches in those two seasons, 61.5 of which were receptions. The passing game is the untapped gem within Cam Akers. Akers has the abilty to be a high performing pass catching back, all he needs is the targets. New Rams QB Matthew Stafford ranks fourth among active quarterbacks that targeted running backs at 22.6 percent. The upside for Akers in this high powered offence is difficult to ignore.

Post 2021 the value for Akers remains, he will be 23 years old with two additional years on his rookie deal, playing in a high octane offense. Akers barring injury and a complete bust of a 2021 season should hold similar value.

I originally wrote this article prior to the news that Cam Akers tore his Achilles and is lost for the season. Running backs have a long history of not coming back from this injury and I have the same concerns when it comes to Akers.

I currently have Cam Akers ranked ranked 12th, and he is my 7th ranked RB in my 1QB start-up PPR rankings. The RotoHeat consensus rankings has Akers two spots higher at 10. Both the DLF ADP of 10 and the rank of RB6 are in line with my rankings. When rankings are redone, Akers will drop significantly and his teammate Darnell Henderson stock will rise. I expect the Rams to bring in a back or two so navigating this back field is difficult.