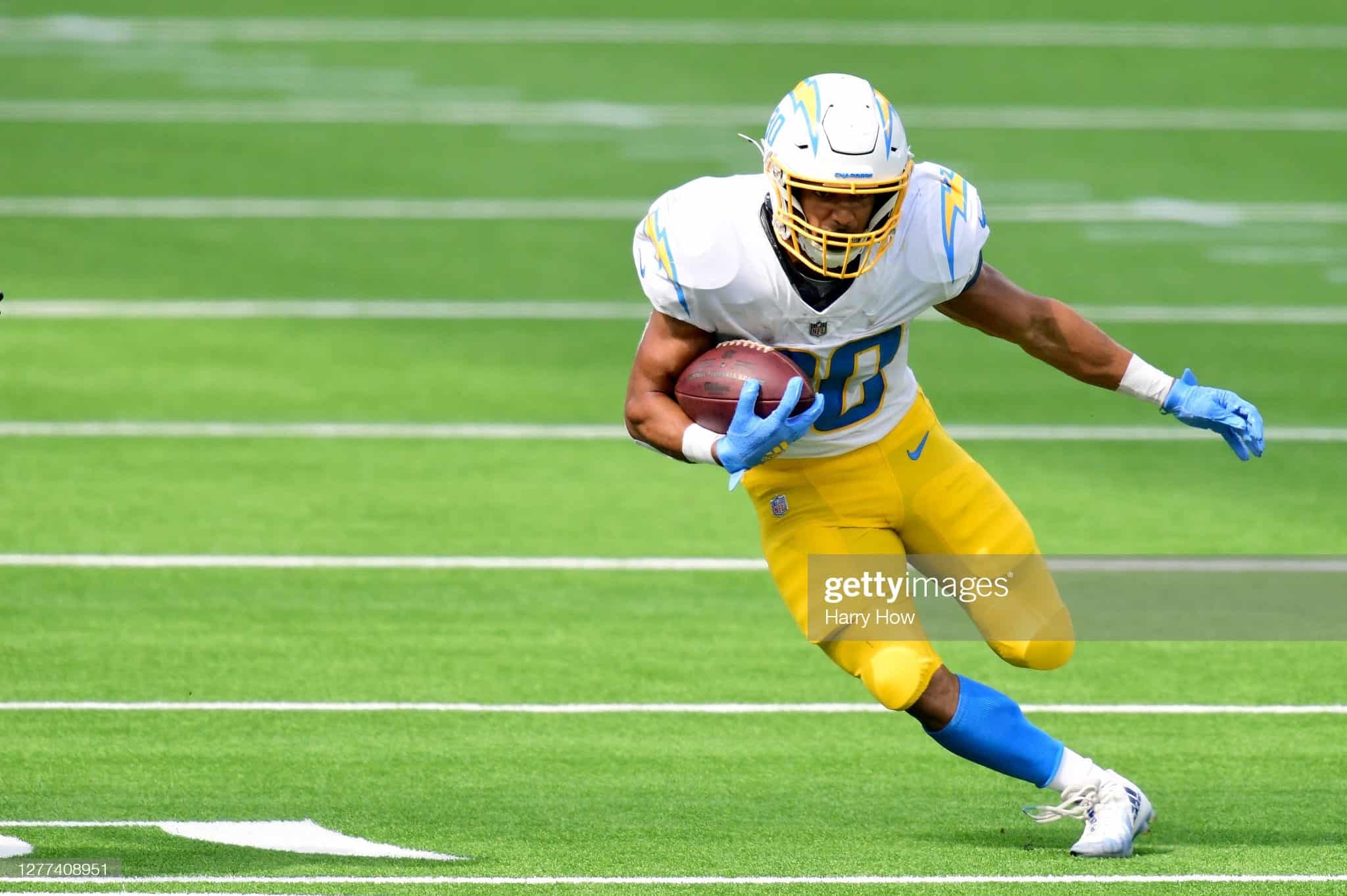 Western Colorado RB Austin Ekeler went undrafted in the 2017 NFL Draft. There were 26 backs selected during the NFL draft. Following the draft the Los Angeles Chargers signed Ekeler as a an undrafted free agent to a three-year, $1.66 million contract.

Austin Ekeler spent four seasons at Western Colorado University. As a true freshman in 9 games he rushed for a team high 1,049 yards. In his sophomore season he he had 14 rushing touchdowns and set school records with 1,676 rushing yards, and 2,093 total all-purpose yards. His best season was his junior year, he scored 19 rushing touchdowns and led Division II in all-purpose yards per game with 203.9 and scoring, averaging 12.6 points per game. He completed his career at Western rushing for 1,495 rushing yards with 15 touchdowns in his senior season.

Ekeler made the team out of camp in his rookie season, joining Melvin Gordon and Brandon Oliver in the Chargers backfield. In a limited role as a rookie, Ekeler proved to be a viable PPR option for fantasy managers. He finished his rookie season with 260 rushing yards, two rushing touchdowns, 27 receptions, 279 receiving yards, and three receiving touchdowns. He was RB45 with 106.9 PPR points. His 106.9 points were more than 18 of the RBs drafted in 2017.

Austin Ekeler’s role continued to grow in 2018 and he increased his total touches in his sophomore season to 145, nearly double the 74 he has a a rookie. Ekeler finished 2018 as RB25 with 168.8 PPR points. His role as a pass catching back was elevated as well. Ekeler was targeted 53 times catching 39 of them for 404 yards and 3 touchdowns. 58% of Ekeler’s fantasy points in 2018 came as a result of the passing game.

Prior to the start of the 2019 season, Chargers starting RB Melvin Gordon informed the Chargers that if he did not receive a new contract, he would demand to be traded and skip training camp. As a result, Ekeler was thrust into the stating role for the first four weeks of the season. In those four weeks, Ekeler averaged 20 touches a game 26.8 PPR points and sat at RB2 behind Carolina Panthers RB Christian McCaffrey.

The remainder of the season (with Gordon back), Ekeler saw his average decline to 12 touches a game, 16.8 points and he was the RB5. He dominated in the passing game, catching 92 passes for 993 yards and 8 scores. His 309 PPR points on the season were good for fourth overall and are the most in a single season by any UDFA signed since 2010.

In 2020 firmly in the lead back role with Melvin Gordon off to Denver via free-agency, there were high hopes for Austin Ekeler. There were also some uncertainties. QB Philip Rivers took his check down passing game to Indianapolis and Tyrod Taylor was named the starter out of training camp.

Prior to week two, Tyrod was injured by the team doctors and rookie QB Justin Herbert became the starting QB, a role he would retain the remainder of the season. Ekeler injured his hamstring early in week 4, an injury that kept him out of the lineup until week 11. Ekeler had nine healthy starts with Herbert at QB and totaled 466 rushing yards, 400 receiving yards and scored three touchdowns. Ekeler finished his injury plagued season as RB26 with 165.3 PPR points.

Entering 2021, there are few running backs with more upside than Austin Ekeler, who could very well bounce back into the top-5 this season. What excites me the most when looking at Ekeler’s upcoming season, are the changes the Chargers have made this offseason.

It starts with the new coaching staff. After firing Anthony Lynn, the Chargers hired Brandon Staley and Joe Lombardi as head coach and offensive coordinator. Staley is a defensive minded coach who should make the Chargers better, its Joe Lombardi that peaks my interest as a fantasy football manager.

Lombardi worked for the New Orleans Saints from 2007- 2014 in various roles, and was the Detroit Lions Offensive Coordinator for the first seven games of the 2014 season under Bill Caldwell. He returned to the Saints in 2016 until accepting the Chargers OC job in 2021. This is exciting for Justin Herbert and for Austin Ekeler. I expect Ekeler to be used in a similar fashion to how the Saints deploy Alvin Kamara. Both are shifty runners and even better pass catchers. They are both legitimate offensive weapons, and they are just as comfortable in the backfield or the slot.

Improving the offensive line was a main area of focus for this new coaching staff this offseason. The past few seasons, the Chargers offensive line has been terrible. PFF graded the Chargers as the 32nd and worse O line in 2020. Entering 2021 PFF has them up to 18th. The Chargers signed G Matt Feiler and C Corey Linsley, and used the 13th overall selection in the draft to add highly touted Rashawn Slater out of Northwestern. These additions will benefit the entire offense, especially Austin Ekeler’s rush attempts.

Looking past 2021, I see Ekeler barring injury remaining a top-15 back for at minimum a few more seasons. The foundation is in place on offense for the Chargers with Herbert at QB, and I see no reason why this isn’t a top performing offense for the foreseeable future.

Cleary by now you realize that I am high on Austin Ekeler. We have seen his upside before and it’s certainly possible he gets there again. One area of concern when studying Ekeler, is his career high for rushing touchdowns in a season is three. This may be due to his offensive line in previous years and his split backfield, but its certainly are area that warrants some concern.

I currently have Ekeler ranked 24th, and he is my 14th ranked RB in my 1QB start-up PPR rankings. The RotoHeat consensus rankings has him at 33. The DLF ADP of 18 and rank of RB11 are a little on the high side for me but certainly are in his range of outcomes. I love Ekeler’s upside, but I prefer to rank closer to the player’s floor versus their ceiling. With Austin Ekeler I believe I have him ranked in the middle of both.

If you are looking to bolster your roster and wish to buy Austin Ekeler, be prepared to pay up. Ekeler is the type of asset that should fetch the 1.03 at minimum in 1QB formats. If you are looking to move a player for Ekeler, it is likely going to cost you a player like DeAndre Hopkins or Aaron Jones. He is a tough player to buy, and if I am rebuilding would be looking to sell.