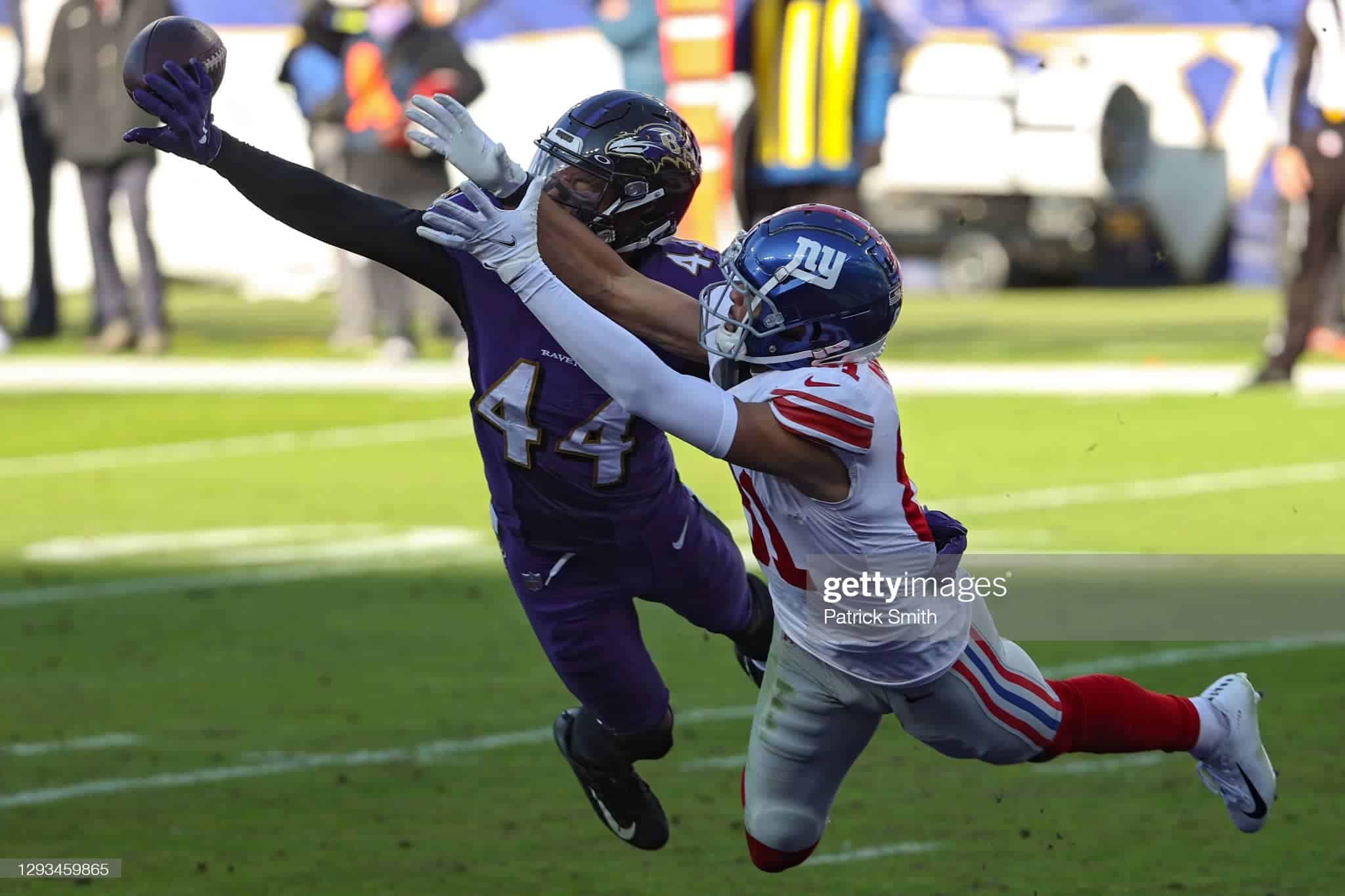 Cornerback is inherently a tricky position to do a top 10 for in dynasty. Quite often cornerbacks that are great one year are not useful within a year or two due to a number of variables (scheme changes, use changes, high positional turnover, etc). What I try to look for are guys who get a large percentage of their points from solo tackles, have consistently shown a knack for big plays, or a combination of the two. With that laid out, here are my top 10 dynasty cornerbacks in the 2021 offseason.

**Please note: Rankings per year referenced are based on the scoring discussed here.

Kenny has been an underrated model of consistency at cornerback for the past few years. Turning 26 in August 2021, Moore was an undrafted free agent in the 2017 NFL Draft. The Patriots signed him initially, but was among the final roster cuts before the season started, so the Colts claimed him off waivers. He played well in limited time in 2017 and was named a starting cornerback in 2018.

In 2018, he was tied for the #3 CB, in 2019 he was #17, and in 2020 he was #2. As an added bonus, much of his scoring is from tackles (averaging 60 solos a year the past three)–not bad for a former undrafted free agent. Moore is currently signed through the 2023 season at a reasonable contract, so I expect him to stay in Indianapolis and continue to be a top fantasy cornerback option.

Another Ravens cornerback?! Yes, as they both deserve to be on this list. Like Humphrey, the 28 year old Peters is a versatile, aggressive cornerback. In 2018 with the Rams he was the CB#55–not great. He was with the Rams at the start of 2019 as well, but after 6 games was traded to the Ravens. This ended up being great for his career, as he fit in immediately and upped his game; he ended 2019 as the #8 CB, and 2020 as the #10 CB.

Peters does make big plays (4 INT, 4 FF, 2 FR, 1 sack and 1 TFL in 2020), but since moving to Baltimore, he is also getting the tackle numbers I like to see (46 solos, 6 assists in 2020). His contract is up after 2022, but he performed well when he was with Kansas City to start his career. Age is still on his side, and with his track record and recent play, I feel Peters is as safe as a bet as we can really get for a dynasty cornerback for the next few years.

What?! A free agent on the list?! Well, Mike Hilton (27 to start next year) deserves to be on here, and if we knew his landing spot he may be as high as #2 on the list. Hilton is a tackle machine from the cornerback position. He first started playing NFL games in 2017 with Pittsburgh. He had been an undrafted free agent from the 2016 NFL Draft who signed with Jacksonville that year, and after being cut he signed to Pittsburgh’s practice squad near the end of 2017. Since then he has been great for fantasy.

Why is he #5 on the list if his highest finish is #8? I like consistency. He has consistently been a guy you would want to start at cornerback, and like those ahead of him, he has been a viable DB in non-CB specific leagues.

A 24 year old for the 2021 season, and a free agent after, Carlton is in line for a pay day if he continues his level of play from the past couple years. For fantasy purposes, a good young cornerback on a competing team looking for a contract is a nice recipe for 2021, and I see no reason he can’t continue this play in the years after.

Gladney did not do great (he had too many missed tackles and touchdowns allowed), but he played a lot (83.80% snap share) and improved as the season went on. The Vikings have a whole slew of defensive issues to sort out with a poor cap situation. Given all of this, I expect Gladney to be a starter again in 2021 as he progressed as the year went on.

With two of the top four Dallas cornerbacks becoming free agents (Jourdan Lewis and Chidobe Awuzie) and a new defensive coordinator, there will be a lot of changes going on for Dallas’s defense on 2021. Diggs will ultimately still have a starting role, and likely increased playing time, which should only move him up the list in 2021 and beyond.

Another 2020 rookie, but this one isn’t on here for the same reasons. Due to injuries he only played in 9 games, starting 6 of them. He had great ratings in run defense, but was TERRIBLE in coverage. He was the #66 CB on the year, and ended with 41 solos, 6 assists, 4 TFL, 1 INT and 2 PD.

So, why is he on this list? Well, he was the #3 pick in the 2020 NFL Draft for a reason, and he is going to get playing time. Even if he is bad, that isn’t a death stroke for production, as we see poor cornerbacks each year that are fantasy relevant due to the targets their receivers get. In 2020, he did well in terms of solo tackles even in limited games. I expect improvement, but not for him to be lights out for a few years, if he ever lives up to his draft position. That said, if he is healthy I see him as a good CB play for the next few years.

We will have more of our Top 10 per position in the 2021 offseason coming up. You can catch all our video content on YouTube. Be sure to subscribe and click the notification bell to ensure that you don’t miss any of our other great content! We have free rankings of all kinds over at RotoHeat.com, and make sure to check out our 2021 Rookie Draft Guide! If you really want something to do after that, you can find me on Twitter.