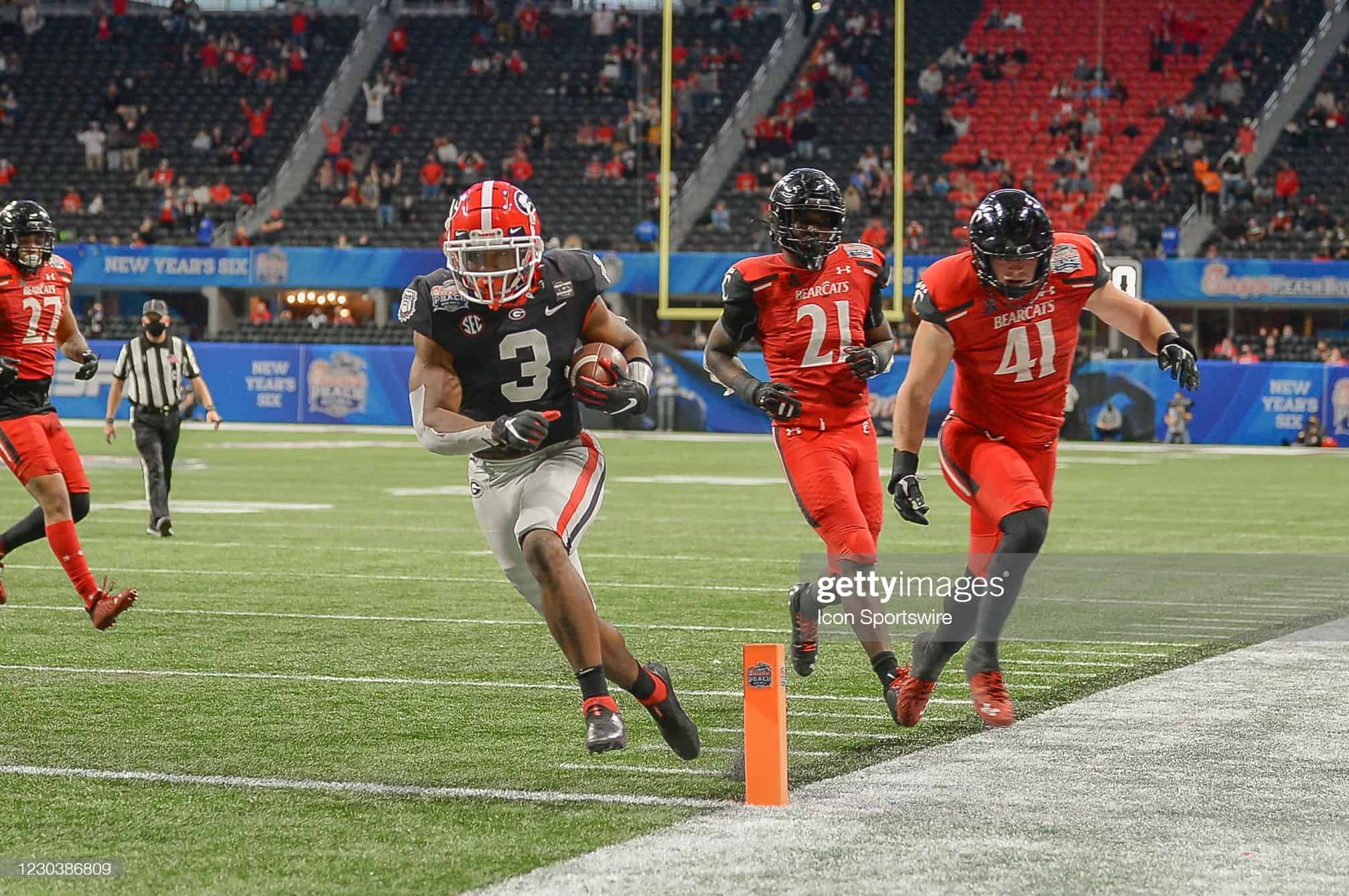 In my Top 10 Devy Players, we are going to cover my top players currently in devy. I do want to note for those that haven’t done devy for long that guys can go from stud to dud in as short as one season (See Tamorrion Terry). These won’t be Superflex-specific rankings, because if it was I would just call it my top 10 quarterbacks! Some devy options at QB for you to look at would be Clemson star DJ Uiagalelei, Sam Howell from UNC, or Spencer Rattler from Oklahoma.

If he had to come out in the 2021 draft class, he would have been my favorite running back over guys like Najee Harris and Etienne. A top 10 recruit in the 2018 draft class, White came to Georgia with high expectations and has looked really good in his limited carries out of the backfield. White has good explosiveness, power and ability to get extra yards after initial contact.

Hall has been extremely productive in his two seasons with the Cyclones. In 2020, he put up over 1,500 yards and 21 touchdowns, plus he adds an extra dynamic as a pass catcher out of the backfield. The 6’1”, 215 lb back is already in the Heisman talk for the 2021 season and could make himself the top back in the 2022 class with another strong showing this Fall.

Once Texas gave Robinson some touches, you saw the dynamic playmaker he can be. In just 86 touches he produced 703 rushing yards and 4 touchdowns. The Longhorns are expecting him to be the focal point of their offense this Fall, and you probably will still have to wait to see him in 2023’s draft class, but he’s more than worth the wait!

He is a big name in the list of 3rd year college players (see Kipp Adams over at Dawgs 247). Pickens just hasn’t seen a ton of action in college, appearing in just 20 games but averaging over 14 yards per catch and showing the big play ability we expected from him coming out of high school. Pickens bring the size/speed combo that helps him profile as a team’s #1 receiver, and if he can take the next step, you could easily see him as a fantasy WR1 in the years to come.

The 5-star prospect coming out of Lake Travis started off 2020 on a hot streak with four straight 100+ yard performances. As the season went on, Fields seemed to look his way a little less, but he still ended the season with more receptions and yards in just 8 games than in all of the 2019 season. He is a big play threat that should continue to see growth and look to be a focal point of the 2021 Buckeyes!

Spiller has great size at 6’1″ and 225 lbs., and he continues to shine as he finished 2020 with over 1,000 total rushing yards and also got more involved in the passing game as the season went on. Spiller looks like the total package when you watch him, and if they continue to involve him in the passing game, he will easily make the case as one of the top backs in the draft when he comes out.

The 6’3″ Ngata hasn’t received a ton of game time, as he was around for 13 games in his freshman season but just 4 games in the 2020 campaign. Another 5 star prospect in the long line of 5-star Clemson wideouts in recent memory, Ngata has the length to win at jump balls and the size/speed to be a big play threat. 2021 can be a huge success for Ngata if he stays healthy and builds a rapport with DJ Uiagalelei.

Another high-end wide receiver prospect that has the size/speed/length combo to be a force at the NFL level, Wease really intrigues me with his ability to high point the ball and stretch the field. 2020 brought more game action, but I anticipate 2021 will be his breakout campaign as he should be one of the top options in the passing game.

Emery is another LSU running back that should make a case when he enters the draft being a potential day one pick, as he has great size at 5’11” and was over 200 lbs. as a junior. Emery brings a powerful running style with the speed and quickness to make people liken him to former LSU and now Kansas City Chiefs star, Clyde Edwards-Helaire.

As a freshman, Boutte saw 10 games of action and racked up 45 catches for 735 yards and 5 touchdowns…again as a freshman! The #2 wideout in the 2020 class, he came to LSU with big expectations and I believe he did an excellent job of meeting them even with the down year LSU had. A team in flux, the Tigers will need to lean on the big play ability of players like Boutte, and I love the comp of Gabe Brooks over at 247 because you see a lot of Stefon Diggs style of play in Boutte.

Thanks for taking the time to see who I like the most in devy. if you have questions, definitely hit me up on Twitter or anywhere you are connected to RotoHeat! Keep up to date with our devy content here on RotoHeat as well as our weekly devy/rookie show over on YouTube!

I want to make sure to remind you these lists fluctuate like crazy, as players enter the transfer portal every year and situations change as players develop and mature. We have to remember, these are just young men and anything is possible–you get homesick or you don’t mesh with a coaching staff and the next thing you know the player is on the move. I do believe this list is pretty safe, as a lot of these guys should be first round fantasy picks in rookie drafts when they get to the league, so if you’re in a devy league scoop them up now!