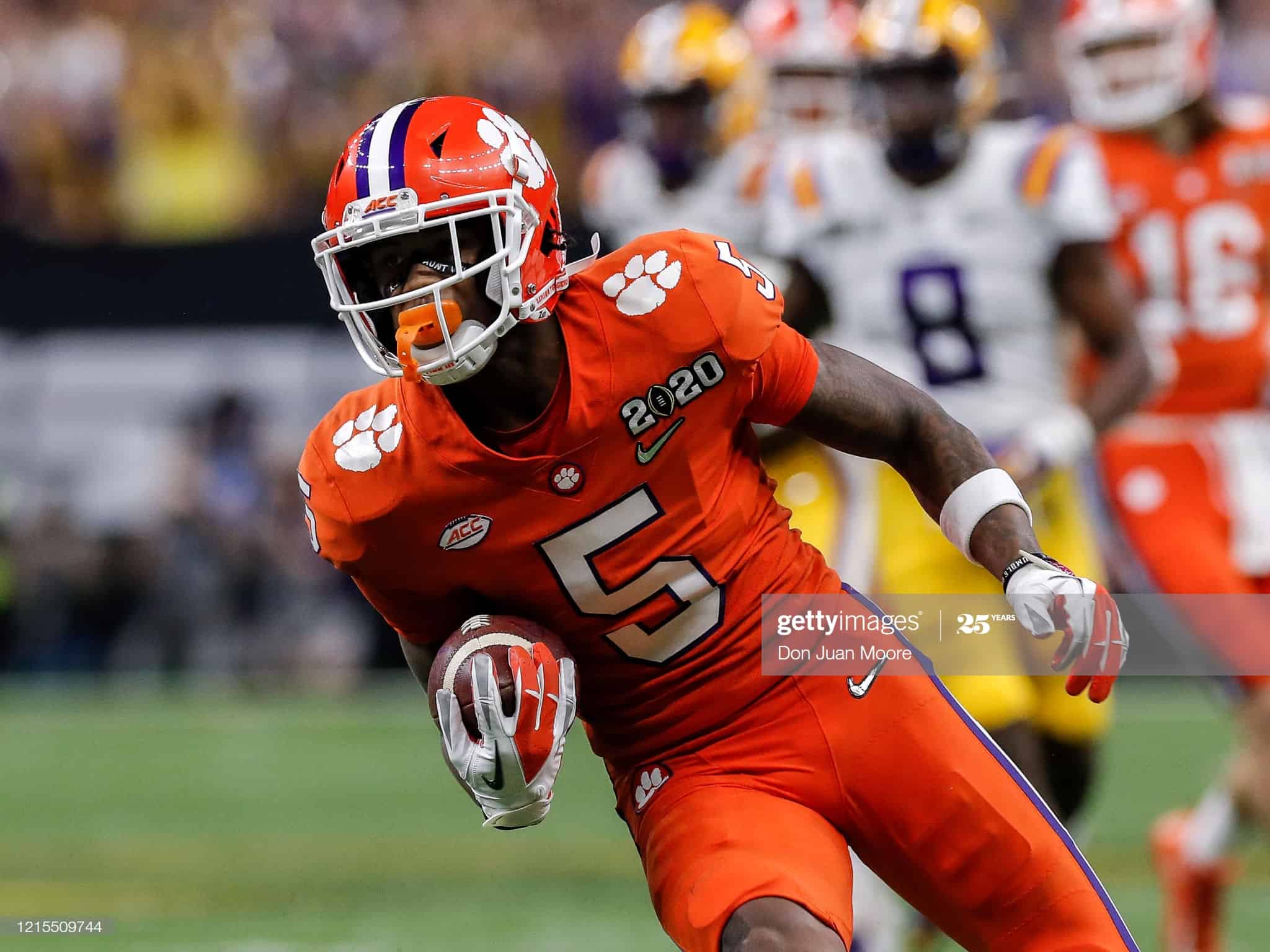 Clemson WR Tamaurice “Tee” Higgins was selected by the Cincinnati Bengals in the second round with pick 33 overall. Higgins was the 6th wide receiver selected in the 2020 NFL Draft.

Higgins spent three season at Clemson. As a freshman at Clemson in 2017, Higgins played in 13 games and had 17 receptions for 345 yards and two touchdowns. He entered his sophomore season in 2018 as a starter and exited that season with 59 catches 936 yards and 12 touchdowns.

In his junior season, he repeated the 59 catches and increased his yardage to 1,167 and his touchdowns to 13. Higgins totaled 118 receptions for 2,103 yards and 25 touchdowns in games with Trevor Lawrence as his quarterback. The duo’s vertical chemistry resulted in Higgins averaging 19.8 yards per reception in 2019.

Higgins entered the draft projecting to be a Day 2 pick for teams looking for a downfield, contested catch threat to win against man-coverage. He is an average route runner who excelled in college with size, great ball tracking skills, long arms, and good hands. Higgins was not as effective against physicality as a man his size (6’4″ 215 lbs) should be, and he will need to improve on this against bigger and stronger defenders at the NFL level.

For a guy that finds so much success down the field, he isn’t a true burner, which is something to consider when projecting him as a guy to stretch the field in the NFL. There is some versatility lacking in Higgins’ game, but he has a chance to be a productive option when paired with Joe Burrow in the new-look Bengals offense.

Entering 2020, Higgins joins returning WRs A.J. Green, Tyler Boyd, and John Ross, in addition to Joe Mixon, and first overall selection QB Joe Burrow. On paper, the Bengals offense looks like one that could do some damage.

I expect Higgins to be in the starting lineup when the season opens. His draft capital and his raw talent should create this opportunity. He could make an even bigger impact if the team ends up moving on from A.J. Green as has been rumored at times throughout the offseason. Even if Green stays in town, Higgins should see plenty of run as a rookie, limiting John Ross in the process.

Tee Higgins projects as a WR3 in his rookie season with slight WR2 upside if his touchdowns can total 6-8.

A.J. Green, if he remains in Cincinnati, will play the 2020 season on the franchise tag. He will not be back in 2021. The Bengals also declined WR John Ross’s 5th year option this off-season, allowing him to enter free agency at the conclusion of 2020.

Higgins current ADP is 59th overall and as the 31st WR off the board. His rookie ADP is 13th, and he is the 6th overall WR in 1QB formats.

I am higher than the consensus in the rookie ranks but lower in the 1QB ranks. This shouldn’t be taken as me not liking Higgins, it’s quite the opposite. I do expect most of the rookies to have less-than-ideal first seasons in 2020 due to COVID-19 and the reduced off-season programs.

If you are a contending team that recently added Higgins in your rookie draft and you are looking to move him for a player that can potentially help you in 2020, target players like Melvin Gordon, Robert Woods, David Montgomery, or Devin Singletary. If you have yet to complete your rookie drafts and you are looking to make a move to get him, you are likely looking at dealing for pick 1.08 at the latest, and in 1QB and SuperFlex formats pick 2.01 or 2.02.

Thank you for reading the Tee Higgins 2020 Dynasty Outlook.