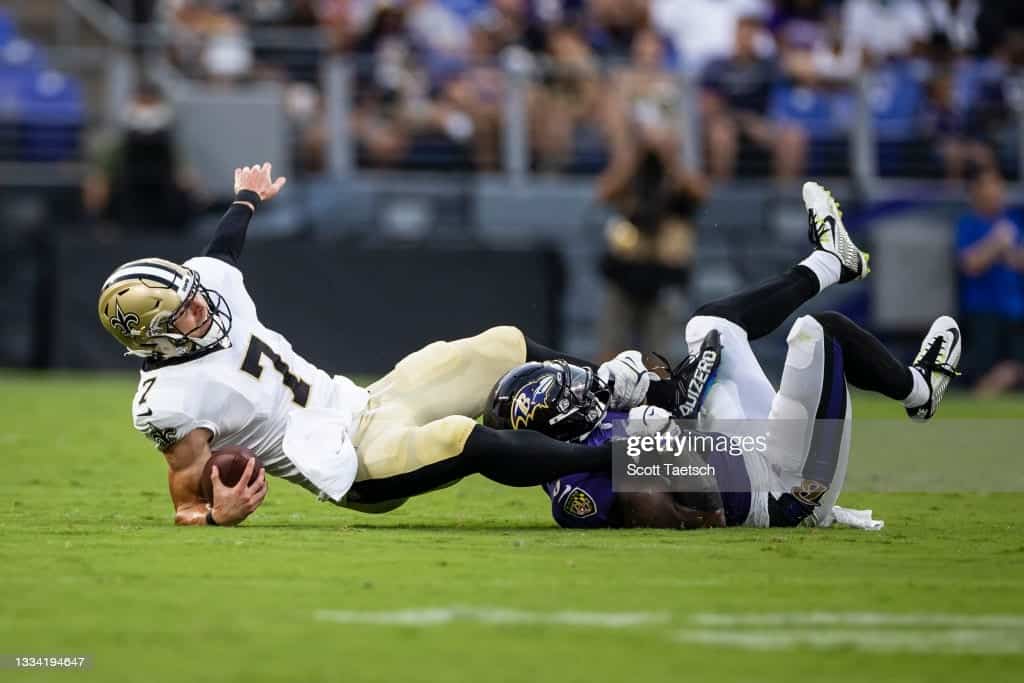 The 1-3 Indianapolis Colts take on the the 3-1 Baltimore Ravens this week for Monday Night Football. It is still early, but these teams seem to be going in opposite directions. The end of the football week can leave you with some tough decisions if you had an earlier player unexpectedly sit out, but never fear! There is always IDP value to be found on Monday Night Football, so let’s find some for Week 5!

The Ravens do not give up a lot of points to opposing defensive tackles (bottom six for the year) but Buckner is a stud that always impacts the game even if it is not in the box score. With how much the Ravens run I do not want to sit him even given the less than stellar match-up.

Stewart has not done much this year and has declining snap counts over the first four weeks. No real interest here given the poor match-up.

Calais has 8 solos, 5 assists, and 2 TFL on the year. He leads the Ravens IL

Broderick Washington and Brandon Williams each have less than 6 combined tackles on the year. Do not play them.

When all three play as expected this week they all get snaps in the high 50% – low 70% area which creates a mess; there is not even a consistent rotation in terms of who getes the most snaps when all three play. The Colts are an ok match-up for EDGE rushers, but all three are big play dependant. If I had to pick one it would be Odafe, followed by Houston and then Bowser (in that order) but I am sitting them all unless forced to.

Turay played in Weeks 2, 3 and 4 but did not register a stat until Week 4 (which was a good week, with 2 solos, 1 assist and 2 sack). Lewis has played in all four games and has 4 solos, 1 assist, 1 TFL and 1 PD over them; that’s combined. I don’t like either, but give me Turay if you are forced to start one or the other.

Okereke has more combined tackles (28 to Darius’ 25) but Darius has more big plays (TFL, sacks, forced fumbles, etc) so Darius has the better season in most leagues. The Ravens are in the top 10 in points allowed to opposing linebackers so I like both this week.

Queen hasn’t been amazing this year but you don’t start him if you have him. The Colts give up the 5th most points to opposing linebackers and he is playing 92% of snaps, so hopefully this is a get right game

9 solos, 4 assists, and 2 TFL is not a good stat line over four games for a linebacker, which Malik has on the year with a 48% snap share. Board has 12 solos and 7 assists (37% snap share) in this clear timeshare, so I’d rather start him over Harrison, but prefer to sit both.

This is not a good match-up. Chuck Clark (safety) and Marlon Humphrey (cornerback) are the only two you really consider anyway unless it is a super deeper league. Neither has had a great season. 6 solos, 3 assists a 1 TFL is Marlon’s best game and that was Week 1. Clark had an amazing Week 3 when many starters on defense missed the game, but beyond that has been just ok.

If I have to start on and there is no cornerback premium, give me Clark. Even taking out their best weeks he has had a better season than Marlon and he does well in run support.

Both have been playing well when healthy, and nearly 100% of the snaps, but Willis is questionable to come back after leaving early Week 3 and missing Week 4, so check his status before the game. Andrew Sendejo has played in Willis’ stead, and is not overly exciting. The Ravens give up the most points to opposing safetys so far this year so I would be comfortable starting both Blackmon and Willis this week.

The Ravens give up the fewest points to opposing cornerbacks. The ball gets spread around a bunch and they are a run first team. Kenny Moore is the play if you HAVE to start one, but I would not play any more them.