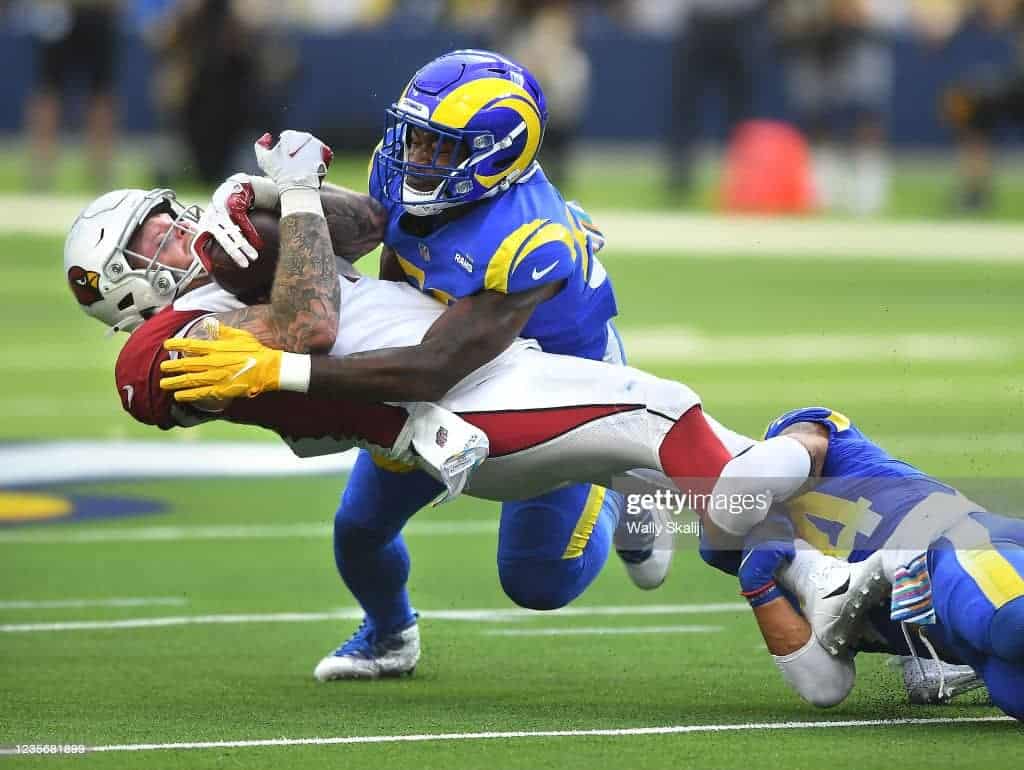 Monday Night Football this week brings an NFC West divisional matchup with the Los Angeles Rams (7-2) taking on the San Francisco 49ers (3-5)! These teams are having very different season so far this year, but as we have seen week in and week out this year, anything can happen any given Sunday…or Thursday…Saturday…or Monday!

We are going to help you find out which IDP players from these teams to sit, and start, in this game; as you IDP players known we have a lot of IDP relevant players in this game. Let’s see what we will be doing for Monday night!

The Rams are 26th in points allowed to opposing defensive tackles. Street has 8 solos, 10 assists, 3 TFL, and 2 sacks on the year (8 games). With not doing much and a poor matchup, he is a sit.

A’Shawn has taken over for Sebastian Joseph-Day since the latter went on IR. A’Shawn has a 37% snap share on the year, which will likely be more with SJD out but I am still not starting him. On the year he has just 15 solos and 14 assists with no big plays. The 49ers are 24th in points allowed to opposing defensive tackles.

Do not sit your studs. Aaron is one of the top defensive players in the league, so start him.

The match-up is poor as stated for Street, but Jones has performed much better than Street of late, with three of his last four games having four or more solos and a big play stat in each of those three. With the poor match I am only considering him if I have no other great option.

Do not sit your studs. Bosa is having a great year and a stud defensive end, play him.

Armstead had a nice game last week (we recommended him as a one week play in our Week 9 waiver article here) but this is a poor matchup (Rams are 28th in points allowed to opposing defensive ends) so he is not a good play this week.

Player on a new team coming off an injury that was worse than expected, against a team in the bottom six of sacks allowed. Von is a player that lives off of sacks and isn’t the Von from 3-4 years ago. I am sitting him this week.

He had a great first start week two weeks ago, and had a poor game last week, but he still outplayed Reeder on the stat sheet. It is said he played less than Reeder last week due to not practicing much at all last week with being sick, so I expect him to be the main guy in the middle this week for the Rams. With a good matchup (49ers are 6th in points allowed to opposing linebackers), start him.

Reeder I think has taken a back seat to Ernest Jones but will still see some play. It is a nice match-up and if you need a bye week or decent floor flex play I am fine with him. But a nice mix of tackles and assists is about all you can ask for, if you are fine with that.

Warner is a top 20 LB this year and while the Rams are dead last in points allowed to opposing linebackers, Warner is still a start. He is an everydown linebacker and will have a decent game for you unless he gets hurt.

When healthy and Greenlaw has been hurt, Azeez has been the second main linebacker for the 49ers. He has had decent games, but with a terrible match-up and a lot of up and down games this season I am sitting him.

Moseley is having a decent year for the 49ers. Since Week 3 he has played nearly 100% of the snaps and 3 or more total tackles a game. Not a great matchup here with the Rams giving up 25th most points to opposing cornerbacks, but given his year thus far and the Rams penchant for passing, I would play him.

No other currently playing 49ers cornerbacks are doing much this year, and with a poor matchup sit them this week.

Ward is unclear to play coming off of injury, and while it is a good match-up (Rams are 7th in points allowed to opposing safetys, Ward is a pure tackle floor play. He has at least 5 combined tackles in six of seven games he has been in, but only 1 PD and 1 TFL on the year despite nearly 100% playing time in his games.

In two games starting (with 100% snap share) he has 7 solos, 2 assists, and 1 TFL. He has played well, the coaching staff and other players have confidence in the rookie. With a nice match-up I am starting him.

The 49ers are 17th in points allowed to opposing safetys, so it is a medicore matchup. Rapp is playing close to a 100% snap share in all non-blow out games but really hasn’t had a great year.

The same goes for Fuller, and both have around the same fantasy points on the year (Fuller leads Rapp by 3 points with our scoring). Both are ok starts if you like safety floor plays with tackles, but I would be looking for a stronger, weekly play I have.

The 49ers are dead last in points allowed to opposing cornerbacks. Sit any not named Jalen Ramsey.

36 solos, 10 assists, 6 TFL, 8 PD, 3 INT, and 1 forced fumble; not a bad stat line for the year for a cornerback. He is the #3 CB on the year so far, and even with a bad matchup I am starting him. He is playing all over the field like the Ravens use Marlon Humphrey and he is a weekly start even in general DB leagues.