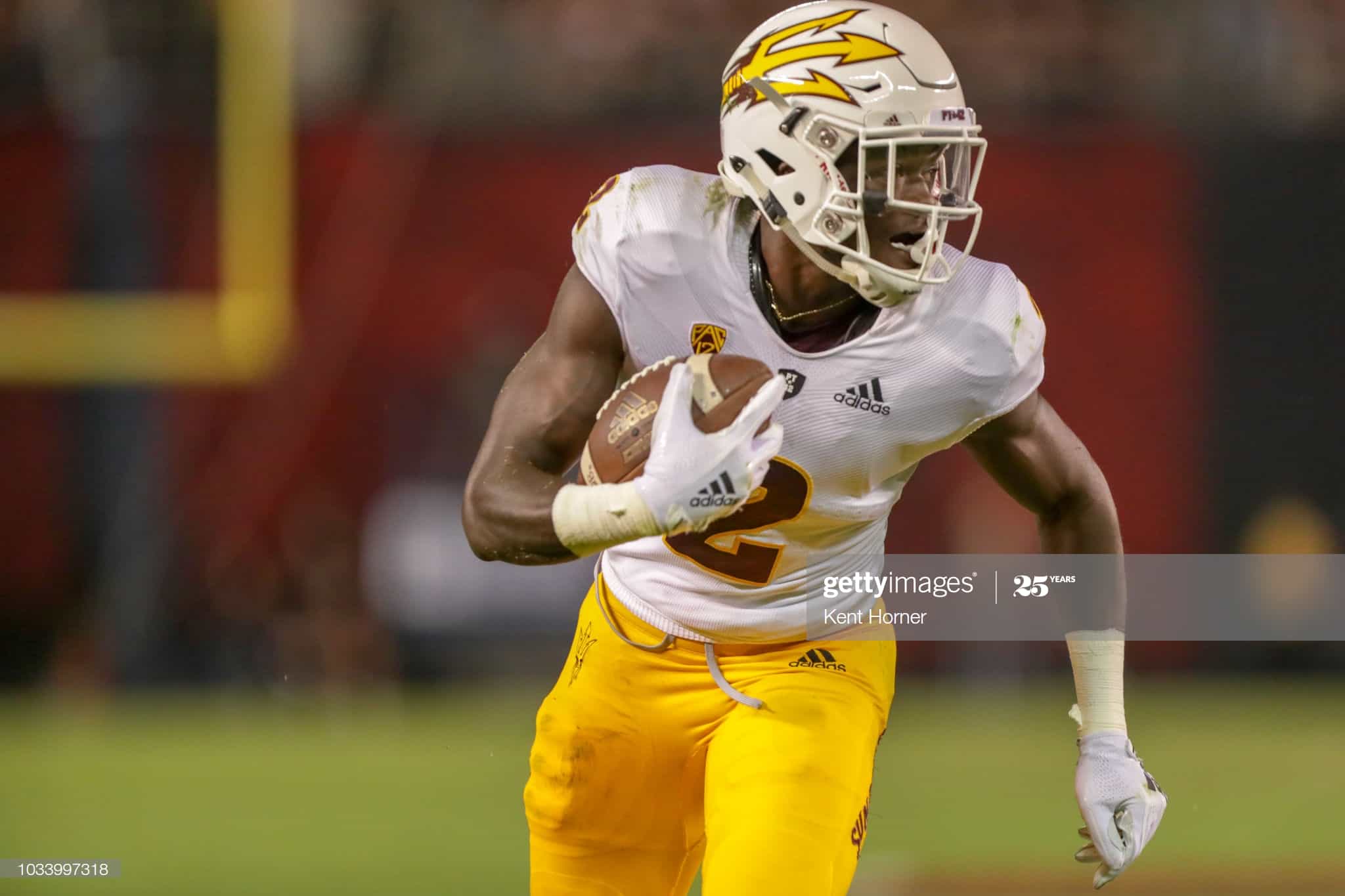 In dynasty leagues, rookies are a hot commodity and rookie fever runs rampant this time of year.  Rookies In redraft leagues with much shallower rosters, however, are often an afterthought.

Each year we a have a handful of rookies that seem like can’t miss prospects that find themselves drafted.  The vast majority, however, will not be.  According to FantasyPros Redraft PPR ADP, there are 15 rookies that we should see drafted in a standard 12 team 15 roster spot league.

There are some players that scare me off based on their ADP like Clyde Edwards-Helaire, D’Andre Swift, and Ke’Shawn Vaughn, for instance, There are also some rookies in redraft that I may target based on their ADP such as CeeDee Lamb, Justin Jefferson, and Michael Pittman. Rookies in Redraft are riskier than in Dynasty Leagues. The reality is, these guys are one and done in Redraft, and making mistakes on draft day can be detrimental to your quest for a championship.

I was recently asked “who are some rookies that will start the season on waivers but could add value at some point in 2020” in our RotoHeat Redraft Community on Facebook. As a result I have put this together for you all.

ARLINGTON, TEXAS – AUGUST 31: Justin Herbert #10 of the Oregon Ducks looks for an open receiver against the Auburn Tigers in the first quarter during the Advocare Classic at AT&T Stadium on August 31, 2019 in Arlington, Texas. (Photo by Tom Pennington/Getty Images) Rookies In Redraft

As we prepare for the 2020 NFL season, I fully expect that the Los Angeles Chargers plan is to start QB Tyrod Taylor in all 16 of games. I also believe that the intent of the Cleveland Browns in 2018 was to give Tyrod the same opportunity.

As we witnessed in Cleveland, the unexpected is possible. Tyrod could be injured, and even more likely, ineffective in 2020. Herbert will walk into an offense full of weapons and should be efficient. He will be added off waivers in the majority of 1QB leagues and all Super-Flex or 2QB leagues. On draft day, Justin Herbert is a rookie in Redraft leagues that almost certainly will go undrafted and one that may very well end up having value.

TUSCALOOSA, ALABAMA – NOVEMBER 09: Tua Tagovailoa #13 of the Alabama Crimson Tide throws a pass during the second half against the LSU Tigers in the game at Bryant-Denny Stadium on November 09, 2019 in Tuscaloosa, Alabama. (Photo by Todd Kirkland/Getty Images) Rookies In Redraft

Tua Tagovailoa finds himself in a somewhat similar situation to Justin Herbert. At this stage of the offseason, Tua has to be considered the Miami Dolphins’ back-up quarterback in 2020. The biggest difference between these two rookie quarterbacks is health.

Tagovailoa suffered five notable injuries during his three-year college career – the most notable of all was a dislocated right hip with posterior acetabular wall fracture in November that required surgery and ended his season. All signs seem to indicate that Tua is going to be healthy come Week 1. Until we see it, he is likely going undrafted in the majority of 1QB leagues this Fall. If and when he proves he is healthy and takes over under center, then he will be added in a bunch of leagues.

ORLANDO, FL – JANUARY 01: Kentucky wide receiver Lynn Bowden Jr. (1) during the second half of the Citrus Bowl between the Kentucky Wildcats and the Penn State Nittany Lions on January 01, 2019, at Camping World Stadium in Orlando, FL. (Photo by Roy K. Miller/Icon Sportswire via Getty Images) Rookies In Redraft

Lynn Bowden is an electric playmaker, but he’s a difficult projection to the NFL level. He’ll be used all over the formation, but is unlikely to be given anything outside of schemed touches. He’ll be a spark plug for this offense, but he’s most likely not going to see enough work to be fantasy relevant on a week-to-week basis.

Bowden’s versatility is what I like most about him. He played literally every position at Kentucky. I do see him catching a decent amount of passes out of the backfield, and at times he should be a rookie that is sought after off the waiver wire.

Barring injuries, it is difficult to envision Van Jefferson having much of a fantasy impact during his first season with Los Angeles. His initial goal will be making it tough for the coaching staff to decide between him and Josh Reynolds as the Rams’ WR3 during training camp.

McVay expressed confidence in Reynolds when Los Angeles traded Cooks and then went and drafted Jefferson in the second round in this year’s draft. If the Rams stay in 12 personnel for the majority of the season, then he has little fantasy relevance. If they run 11 personnel, he likely fills the role vacated by Brandin Cooks and becomes a rookie in redraft that will find his way onto several fantasy rosters.

PULLMAN, WASHINGTON – SEPTEMBER 21: Devin Asiasi #86 of the UCLA Bruins moves the ball against Bryce Beekman #26 of the Washington State Cougars in the first half at Martin Stadium on September 21, 2019 in Pullman, Washington. UCLA defeats Washington State 67-63. (Photo by William Mancebo/Getty Images) Rookies In Redraft

Prior to the 2019 season, the New England Patriots hadn’t had to worry about the TE position. Since 2010, they were able to rely on both/either Rob Gronkowski and Aaron Hernandez. In 2019, Ryan Izzo, Matt LaCosse, and Ben Watson combined for 56 catches, 663 yards and 1 touchdown. This is not what they have grown accustomed to.

The job at TE, needless to say, is wide open, and I like Devin Asiasi to be the primary pass catching TE for newly signed QB Cam Newton. It remains to be seen how Cam operates in the Josh McDaniels offense, however. One thing is for sure–if Cam uses Asiasi like he used to use Greg Olsen, Asiasi will be a TE that is grabbed off many waiver wires this season.

The Chicago Bears do not have a shortage of Tight Ends entering training camp. According to ourlads.com, the Bears list 9 TEs on their depth chart–most notably, veteran Jimmy Graham. The good news for Cole Kmet is none of them are particularity any good.

If he is able to prove he can block at the NFL level, Kmet should see decent playing time in 2020. If Kmet is able to stay on the field consistently this season, he could see decent targets for a rookie Tight End. The Chicago Bears offense plays through the Tight End, and Kmet was the highest-graded rookie Tight End in the 2020 NFL Draft. He has upside and it doesn’t take a lot to be viable at the TE position in redraft. Kmet could very well find his way off the waiver wire in 2020.

BOULDER, CO – OCTOBER 25: Laviska Shenault Jr. #2 of the Colorado Buffaloes carries the ball for a 73-yard touchdown catch against the USC Trojans in the third quarter of a game at Folsom Field on October 25, 2019 in Boulder, Colorado. (Photo by Dustin Bradford/Getty Images) Rookies In Redraft

Laviska Shenault Jr. is a WR with a lot of upside. He is also a WR with a rather low floor. He offers explosive playmaking potential with strength and speed that can turn a catch anywhere on the field into a touchdown. He also possesses a long history of injury that saw him miss 12 games in three seasons at Colorado.

In Jacksonville, Shenault joins a mediocre offense and will see the field often, especially in 3 WR sets. The good news for Laviska is Jacksonville won’t be a good football team and they will need to throw a lot. I do not expect Shenault to be drafted in the majority of standard size redraft leagues, and I don’t expect him to be on your waiver wire long either.

STATESBORO, GA – OCTOBER 25: Darrynton Evans #3 of the Appalachian State Mountaineers moves the ball during the second quarter of their game against the Georgia Southern Eagles on October 25, 2018 in Statesboro, Georgia. (Photo by Chris Thelen/Getty Images) Rookies In Redraft

Darrynton Evans was selected by the Tennessee Titans to fill the role of recently released RB, Dion Lewis. The potential bad news for Evans is Lewis was a very small part of the Titans offense. Evans, however, should be much more involved.

The Titans are going to rely heavily upon Derrick Henry, but Evans is a unique change-of-pace option. In situations where Tennessee needs to pick up the pace, Evans should see a role. He possesses a pass catching ability that Henry simply does not. Tennessee’s offense will regress in 2020, and they will need to throw more. As a result, Evans has potential to be a RB that owners will seek to add off their waiver wires.

NEW ORLEANS, LA – JANUARY 13: Wide Receiver Tee Higgins #5 of the Clemson Tigers on a catch and run during the College Football Playoff National Championship game against the LSU Tigers at the Mercedes-Benz Superdome on January 13, 2020 in New Orleans, Louisiana. LSU defeated Clemson 42 to 25. (Photo by Don Juan Moore/Getty Images) Rookies In Redraft

Tee Higgins is a WR that I like a lot. He was a touchdown machine in college, putting up 25 in his last 30 games played. In 2020, Higgins finds himself on a suddenly talented and potentially potent offense in Cincinnati.

While he is a terrific jump-ball receiver, Higgins is a limited athlete who will need volume to be fantasy relevant on a week to week basis. With A.J. Green, Tyler Boyd, and perhaps John Ross ahead of him on the depth chart, Higgins is going to need injury to get the volume he requires to excel. There might not be a better offense to be a part of in the NFL if you are in need of injury to become relevant at the WR position. Higgins has the potential to build a connection with fellow rookie Joe Burrow and is a good bet to be an early add off of league’s waiver wire.

TEMPE, ARIZONA – AUGUST 29: Wide receiver Brandon Aiyuk #2 of the Arizona State Sun Devils runs with the football en route to scoring on a 77 yard touchdown against the Kent State Golden Flashes during the second half of the NCAAF game at Sun Devil Stadium on August 29, 2019 in Tempe, Arizona. (Photo by Christian Petersen/Getty Images)

The San Francisco 49ers drafted Brandon Aiyuk to fill the role vacated when Emmanuel Sanders departed. Aiyuk finished with 65 catches for 1,192 yards and eight touchdowns for Arizona State last season. 2019 was Aiyuk’s first season as the top pass catcher for the Sun Devils, and he proved that he could deliver.

The Niners are not a pass heavy offense, and when drafted, Aiyuk was likely the third best passing option for QB Jimmy Garoppolo behind George Kittle and Deebo Samuel. His potential to be relevant in his rookie season was quite low. The recent injury to Deebo, however, gives Aiyuk’s fantasy outlook in 2020 a major boost. It’s quite possible that the injury gets Aiyuk drafted in the late rounds of redraft leagues this season. If it doesn’t, it sets him up to be one of the most sought after rookies in redraft off of the waiver wire.

Thank you for reading Rookies in Redraft