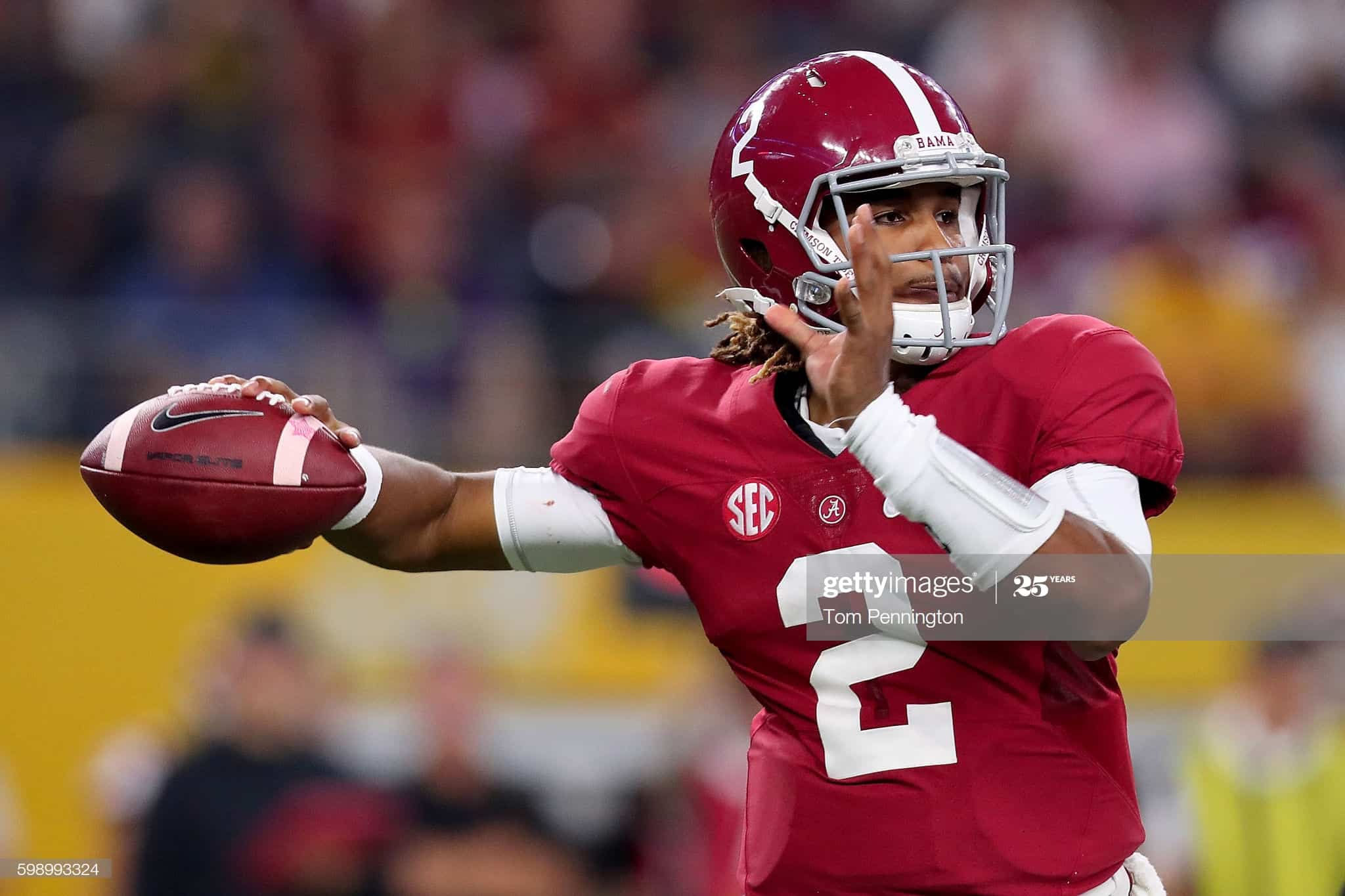 Here are a list of potential rookie sleepers to keep an eye on. With the strange times we are living in, some of these players may fall in the draft because of the lack of exposure during the draft process. Some of these players got hurt before the combine, and in turn weren’t able to do much more than interviews, leaving NFL teams to trust what they see on the college film.

Hurts is the type of quarterback that teams are looking to deploy in today’s NFL, and TheDraftNetwork has him ranked just behind the big names in this years draft, which makes him a name to watch. After watching tape on him, I saw a player that was a physical runner with an above-average arm, probably similar to Lamar Jackson, but not as ready to take over an NFL offense as the former 1st round pick of the Ravens. Most likely teams will see him as a developmental prospect, but you could easily see him being a late 2nd or early 3rd round pick, and could also see a team like the Chargers taking him if they choose to go after a need like an offensive lineman early in the draft. If he goes to a team that you can see a clear line to playing time in the next 2-3 years, I’d feel very comfortable drafting him and stashing him on my taxi squad.

Call it Minshew bias or the Washington State air-raid system, but I think Gordon has an outside shot of working towards being a valuable asset. The question is will he be a viable fantasy asset? Gordon has a quick release and is a pretty solid all around passer that given time could develop into a viable NFL quarterback. I’m not saying spend high capital on him, but if you’re in a superflex rookie draft, I’d easily consider him as a stash at the end of the draft.

I put Huntley in the same category as Gordon, as he has some intangibles that should peak a teams interest. In fantasy, if he’s on the roster you never know how quickly he could be in a position to provide fantasy relevance. He’s got good accuracy, an above-average arm, and enough wiggle to get out of trouble when needed. He is probably the most developmental QB out of the three mentioned, but has enough traits that could make him draftable in both the NFL and your fantasy leagues.

Anyone who’s part of the RotoHeat community knows I love me some McFarland Jr, and for good reason. He’s got great physical traits but just as great as those are, he doesn’t have a ton of production to show for it. In his time at Maryland, he was stuck behind NFL-Caliber running backs and also fought through some injuries, but still had modest production in his time with the Terrapins. McFarland’s not great in pass protection, but he has plus vision and a burst that can make him a big play threat every time he has the ball in his hands. In fantasy drafts, I can easily see him being a late 2nd round rookie pick, but make sure to keep an eye on our ADP to see where he’s landing when your league drafts.

I see a lot of Sony Michel in Perine’s game, as he has a plus burst and vision and can easily be drafted between the 3rd and 5th rounds of the NFL draft. At 5’11 and 218 lbs, he has the size and speed to carry the load for a team. We saw in 2019 that he was able to catch 40 passes, so we know he has some pass-catching ability to his game as well. He didn’t have a ton of college production, averaging just around 120 carries per season, 5 yards per carry, and just 22 total touchdowns. In your fantasy drafts, you should be able to get him somewhere around the early part of the 3rd round.

Is Gibson a running back or receiver? Both, actually. In 2019, we saw Gibson eclipse 1,000 total yards and 10 touchdowns while being utilized at both positions. Teams will look to draft him for just that purpose, as most teams love versatility these days so that players can be used as mismatches at the next level based on the competition they are facing. He ran a 4.39 at the combine, so we know he’s got some great speed, and at his size he can fill in all over the offense. The big question is who will take the chance on one year of college production? I’d see him being a guy drafted in day 3 of the NFL draft, and somewhere in the 3rd round of your rookie drafts as a solid stash option.

Getting hurt pre-combine could definitely cause Edwards to fall down the boards. Top that off with some players showing out and potentially getting in line ahead of him, this puts him squarely in the sleeper category. Unfortunately, Edwards wasn’t given any favors with the quarterback play at South Carolina, but the massive wide out could easily be drafted in day 3 and be a guy you can stash, hoping he bounces back from injury and develops into a valuable fantasy asset. I like how physical Edwards can be when fighting for the catch, as well as his plus ball skills and hands, and you can easily snatch him up at the end of your drafts as a taxi squad prospect.

After smashing the vert and posting a good 40 time at the combine, teams are most likely taking another look at the former Michigan wideout. The unfortunate thing for Jones is the fact that Michigan was a dumpster fire at quarterback his entire time at Michigan, though there were plenty of times Jones didn’t do the team any favors with concentration drops. Along side his combine performance, Jones has a great combo of size and speed with above average ball skills and a solid athletic profile. Most are expecting him to be drafted in the 2nd or 3rd round in a few weeks. In your fantasy rookie drafts, you’ll probably have to snag him in the 2nd round.

Hill set the record at OSU for catches, and that’s no small feat with the school’s prolific history of producing NFL-caliber talent. He fits the mold of a slot receiver at the next level, as he is a really solid route runner and has a nice amount of burst. I’d expect that he will be drafted later in day two. I don’t necessarily see him as a big play threat, but he is a catch machine, and could be that at the next level as well, which makes me think late 2nd, early 3rd round rookie pick with upside.

Keene is a versatile tight end, but sadly Virginia Tech isn’t know for showing much love to the tight end which is why he amassed only 59 total catches in three years with the Hokies. Keene is truly a developmental tight end, but showed well at the combine, posting a 4.71 40 time with 21 reps on the bench press. At 6’4” and 253 lbs, he has the size and speed to be a really solid tight end at the next level with the proper coaching and route tree development. You can easily snag him late in your rookie drafts and stash him with the hopes he has the work ethic to develop into a playable fantasy producer.

There is not a ton of production with future 1st rounder Justin Herbert, but unfortunately Oregon’s offense isn’t predicated on the tight end but more so on big plays to the wide receivers. He’s not an amazing athlete, but he can be a vertical threat and has the physicality you want from a tight end. Though it’ll take some development to get the most out of Breeland, he’s another option at the end of your drafts that you could easily stash and develop. In a time where there aren’t a ton of quality tight ends after the top one’s in the league, Breeland could possibly pan out.