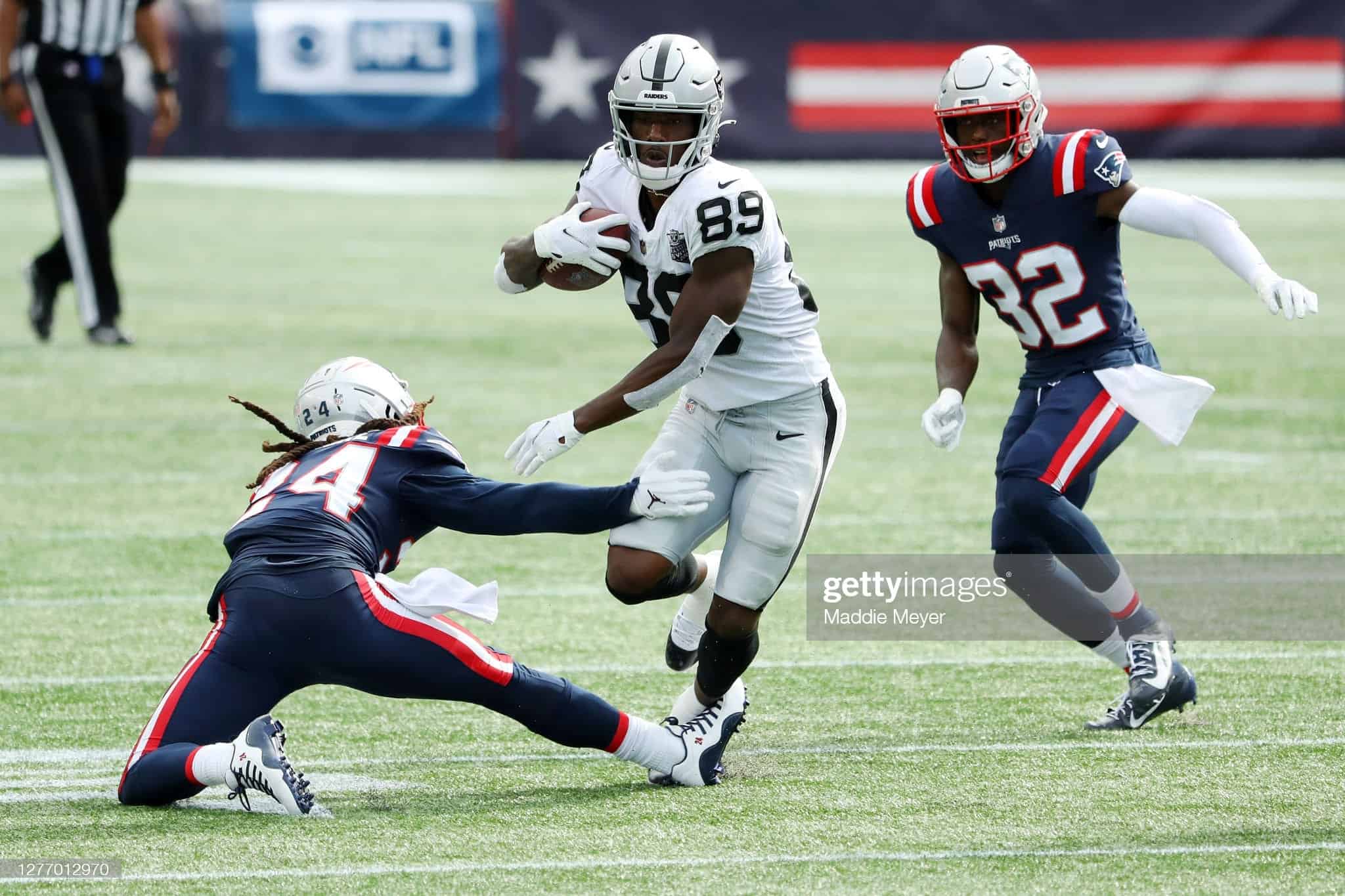 Revisiting the 2020 Rookie Class Part I

In the first installment in this series, I review the rookies selected in the third round a year ago. This time of the offseason the dynasty manager is focused on the incoming rookie class, and rightfully so. The NFL draft recently concluded, and most dynasty managers have started right into their 2021 rookie drafts. There are rookies we are collectively high on like Ja’Marr Chase, Najee Harris, and Kyle Pitts. There are also the lesser hyped rookies that managers will add in later rounds of their drafts like Tylan Wallace, Elijah Mitchell, and Hunter Long.

Last year was a rookie class full of promise and upside, but where are they now, and how should they be viewed entering their sophomore season? In this three part series, I review all skill positional players drafted within the top 100 picks in the 2020 NFL draft starting with the third round and concluding with round one.

In his rookie season, Gibson finished as the RB13, totaling 202.4 PPR points in his 14 games played. His 14.4 points per game were 19th best. The seventh running back off the board in the 2020 NFL draft, Gibson exceeded expectations and finished second to only Indianapolis Colts’ RB Jonathan Taylor in this draft class.

Dating back to 2010, Gibson became only the sixth RB selected in the third round to produce a RB24 or better season as a rookie (Duke Johnson, David Johnson, Alvin Kamara, Kareem Hunt, and David Montgomery were the others). Had Gibson not suffered a toe injury late in the season which forced him to miss Weeks 14 & 15 (and limiting him in Week 16 & 17), he likely would have landed in the top-12 in 2020. The only 3rd round RBs in the past 11 years to accomplish that feat are Kamara and Hunt.

Gibson was a relative unknown entering his first season in Washington. This is a player that was limited to 77 touches in two years at Memphis and only 33 rushing attempts, as Gibson was listed as a WR in college. Like most of this rookie class, he started slow and got more and more involved in the offense as the season progressed. Gibson had his coming out party on National TV on Thanksgiving Day running all over the Dallas Cowboys to the tune of 115 yards and three touchdowns.

Entering 2021, The Football team has a new look on offense. They added QB Ryan Fitzpatrick and WR Curtis Samuel via free agency and drafted North Carolina WR Dynami Brown. Retuning with Gibson is franchise WR Terry McLaurin and RB J.D. McKissic. I would expect the offense to run primarily through Gibson, McLaurin and Samuel in 2021, making Gibson a RB that should be held on to for quite some time.

A few weeks prior to the start of the 2020 season, the Buccaneers signed free agent RB Leonard Fournette to join Vaughan, Ronald Jones and LeSean McCoy in the running back room. The Fournette signing impacted Vaughan the most. He was limited to 10 games (no starts) and 31 total touches in his rookie season. Those touches led to 143 total yards, 1 score, and a RB99 finish.

After winning the Super Bowl, the Buccaneers made it a priority to bring their starters back, thus 2021 looks like another potentially lost season for Ke’Shawn. If you drafted this man in the late first round/early second a year ago, all you can do is hold on and hope that the departure of LeSean McCoy leads to increased playing time and touches. If you can buy on the cheap, it’s worth it, but it has to be 4th round pick cheap.

Bryan Edwards was a wide receiver that gained momentum during draft season and lost it nearly as quickly as he gained it. Edwards was a disappointment in his rookie season, putting up 36.3 PPR points in his 10 games played.

Edwards suffered knee, hamstring, shoulder, and ankle injuries throughout his college career. He missed time in all 4 of his years at South Carolina. Once leaving college, the injury woes continued. He broke his foot preparing for the NFL Combine and missed 4 games due to an ankle sprain in his rookie season.

Edwards may have an opportunity to redeem himself in 2021, as the Raiders did not add any competition for their pass catchers via the draft. Regardless, his proven inability to stay healthy is reason enough for me to move on. If you can get back the draft capital you spent on Edwards a year ago, consider it a win and move on.

Zack Moss finished his rookie season as RB46, splitting the workload in the Bills backfield with Devin Singletary (RB31). Moss missed three games in his rookie season with toe, shoulder and knee injuries, and he fell victim to an offense that heavily preferred the pass to the run. Moss carried the ball 112 times in 2020 for 481 yards and scored 4 touchdowns. Singletary led the Bills with 125 carries, and QB Josh Allen was third with 102.

The 2021 version of the Buffalo Bills is likely to resemble the 2020 version–pass heavy, with a QB stealing touches, especially in the red zone. Buffalo was rumored to be interested in adding a running back in the draft and did not. The committee that was in place a year ago is almost certainly coming back, limiting the upside of all involved and making their floor somewhat uncertain. Selling Moss does you no good at this point of his career, so you are best to hold and hope that he takes hold of that backfield sooner rather than later.

Devin Asiasi appeared in eight games a season ago for the New England Patriots and he finished his rookie season with seven targets, two receptions, 34 yards and a touchdown. Asiasi was inactive in Weeks 7 & 8, and spent Weeks 9-12 on Injured Reserve. He didn’t see his first NFL target until Week 13 and didn’t have a catch until Week 17.

The Patriots added Hunter Henry and Jonnu Smith, the two top free agent TEs, this offseason. The additions of these two talented TEs pushes Devin Asiasi down the depth chart to the point where we holds little to no fantasy value. You can go ahead and drop Asiasi.

Devin Duvernay was a WR that I targeted in all of my 2020 rookie drafts. He was coming off a 106 catch, 1,386 yard senior season at Texas and was added by a team desperate for pass catchers. He ended up appearing in 15 games for the Ravens and he finished as WR116 with 53.1 PPR points–not the result I targeted in the Spring.

Duvernay turned out to be a rarely used receiver in an offense that rarely threw the football which is not a good combination to say the least. He only saw 26 targets and never more than three in a single game. With the recent additions via the draft of Rashod Bateman and Tylan Wallace, combined with the returning Marquise Brown and Mark Andrews, Duvernay’s usage is not likely to increase in 2021. If I can get back the third round pick I spent on him a season ago, I will do so happily. If not, I will stash him on my taxi squad or bench and hope for the best.

Evans was an interesting prospect coming out of Appalachian State. In his final two seasons he totaled 2,952 total yards on 467 touches, and he scored 31 touchdowns. Joining the Tennessee Titans behind Derrick Henry capped his upside. He finished the season with only 16.1 PPR points in his five games played.

Evans was inactive for the first two weeks of the season, and after appearing in two games was placed on Injured Reserve for eight weeks after suffering a grade 2 hamstring strain. He retuned for three more games to finish out his rookie season.

Normally I have little interest in a running back that totals 54 rushing yards in a season, but I am holding onto Evans. Derrick Henry went over 2,000 rushing yards in 2020. He became the eighth back in league history to do so. Of the previous seven, all but two of them missed time the following season. Other than adding free agent RB Brian Hill after he was released by the Atlanta Falcons, The Titans backfield returns in 2020. Hold Darrynton Evans, and if Henry misses time, he will get a shot.

The Green Bay Packers selected University of Cincinnati TE Josiah Deguara in the third round of the 2020 NFL Draft. Deguara was the highest-drafted player out of the U of C since Travis Kelce was picked No. 61 overall by Kansas City in 2013.

Kelce missed his 2013 rookie season with a knee injury, and Deguara had his rookie season limited to 3 games, after being inactive in Weeks 2 & 3, and tearing his ACL in Week 5. The college and the knee injuries are where the similarities with these tight ends start and finish. Stash Deguara on a taxi squad, as he likely will not develop into a fantasy relevant TE, but it’s too soon to give up on him entirely.

Thank you for reading Revisiting the 2020 Rookie Class Part I