Home Dynasty Re-Ranking A.J. Brown, DK Metcalf and the rest of my top 5... 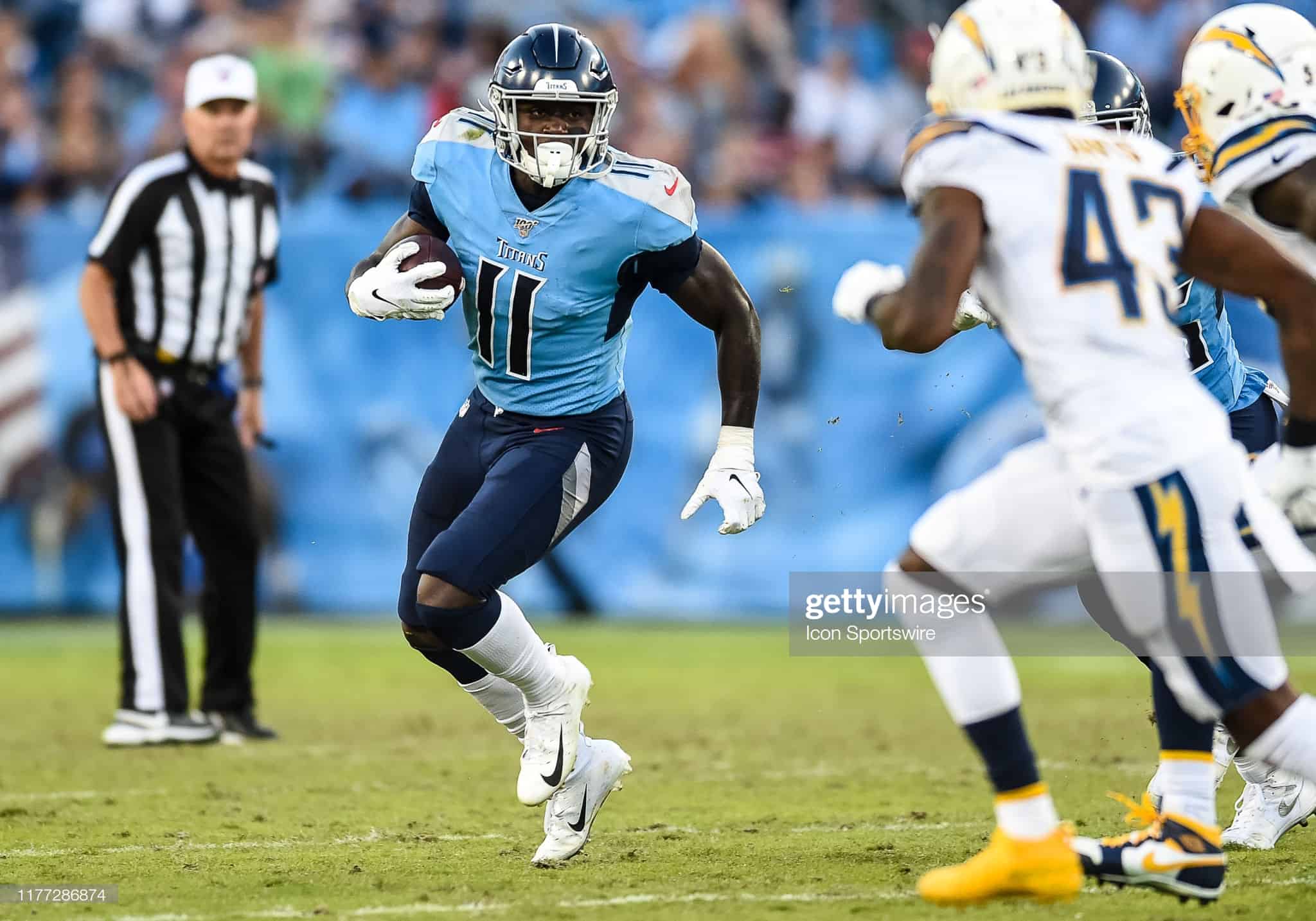 My top 5 rookie wide receivers prior to the 2019 season were;

The 2019 WR class is a special draft class–one that one day may compare to the 2014 WR class that includes the likes of Odell Beckham, Mike Evans, Brandon Cooks, Davante Adams, and Jarvis Landry.

Together, rookie wide receivers in 2019 gained 11,653 receiving yards in 2019–the second-most by any rookie class all-time, second only to the 13,765 yards recorded in 2014. Hindsight is 20/20 they say, and with the knowledge of a full season out of this group, I revisited the 2019 class and updated my Dynasty rankings.

MIAMI, FL – SEPTEMBER 08: Marquise Brown #15 of the Baltimore Ravens catches a 47 yard touchdown pass from Lamar Jackson #8 in the first quarter against the Miami Dolphins at Hard Rock Stadium on September 8, 2019 in Miami, Florida. (Photo by Eric Espada/Getty Images)

Hollywood Brown was a wide receiver I studied a lot prior to my rookie drafts, and I liked a lot of what I saw of him at Oklahoma. The reason I didn’t have him higher in my pre-draft rankings was because I was concerned about his size, I disliked his landing spot, and he was in the process of dealing with a foot injury.

Brown was the first wide receiver drafted in 2019, and it turns out that he probably had one of the best landing spots. He finished the season eighth in receiving yards among rookie WR’s (584).

Brown spent much of the offseason rehabbing from Lisfranc surgery and spent nine of 16 games on the injury report listed as questionable. During the regular season, he played just 58% of Baltimore’s snaps. During the postseason, Brown played 85% of the snaps–turning 11 targets into 126 yards. The game script played a role in that productivity. Lamar Jackson, to put it into perspective, had 59 pass attempts.

It is possible that Brown may always struggle with injuries (remember my concerns with his size). He was super-efficient in college, and he was super-efficient in his rookie season. It certainly doesn’t hurt that he’s playing with the league’s reigning MVP for the foreseeable future. As long as he can stay healthy, the future is very bright.

PHILADELPHIA, PENNSYLVANIA – JANUARY 05: D.K. Metcalf #14 of the Seattle Seahawks catches a pass for a touchdown in the third quarter of the NFC Wild Card Playoff game against the Philadelphia Eagles at Lincoln Financial Field on January 05, 2020 in Philadelphia, Pennsylvania. (Photo by Steven Ryan/Getty Images)

DK Metcalf is a beast. He was arguably one of the most physically gifted wide receivers to ever participate in the NFL Combine. His upside was never in question. What was a question — a fairly common one — was if he could ever be a complete wide receiver, or something more than a straight-line deep threat.

Based on my pre-draft ranking, I wasn’t concerned with his ability to play at the NFL level and I certainly wasn’t swayed by his 3 cone drill results at the combine.

In Metcalf’s his final two seasons at Ole Miss, Metcalf totaled 71% of his yards on the go route and the hitch. With the Seahawks, those two routes comprised of only 38% of his 900 yards, thus illustrating that he can succeed at the NFL level. It’s likely that we still haven’t witnessed Metcalf’s true potential.

From Week 10 until the end of the regular season, Metcalf out-targeted Tyler Lockett 46 to 38. It’s possible that DK could be pushing for WR1 duties in 2020. The number one in the Seattle offense has historically been an efficient role, but one that typically lacks volume. Over the past nine seasons, Seattle’s WR1 has averaged 6.32 targets per game, eclipsing 7.25 targets per game only once. To put that into perspective, in 2019, those numbers would have ranked just 44th and 29th, respectively.

I remain high on DK Metcalf, but there are three wide receivers that have passed him in my rankings entering 2020.

SANTA CLARA, CALIFORNIA – JANUARY 19: Deebo Samuel #19 of the San Francisco 49ers reacts after a play against the Green Bay Packers during the NFC Championship game at Levi’s Stadium on January 19, 2020 in Santa Clara, California. (Photo by Sean M. Haffey/Getty Images)

Deebo Samuel, to be truthful, wasn’t on my radar entering the 2019 rookie draft season. I knew who he was and that he excelled at South Carolina, I just wasn’t enamored with his landing spot and questioned if his game could transition to the pro level.

It turns out that what we saw from Samuel in his rookie season was an extension of what we saw from him in South Carolina. Deebo is a dynamic playmaker skilled at making defenders miss. Samuel forced 18 missed tackles on 57 receptions. On a pre-reception basis (0.32), this ranked fifth-best by any 50-catch receiver this past decade. He also averaged 8.49 yards after the catch per reception, which also ranked fifth-best this past decade.

From Week 10 until the end of the regular season, Samuel ranked 14th among all wide receivers in fantasy points per game (16.1). It is possible that his play was enough to supplant free agent Emmanuel Sanders as the team’s WR1.

Working against Samuel is his relatively advanced age (24 years old), San Francisco’s run-heavy offense, and that George Kittle is truly the Niners WR1.

LANDOVER, MD – SEPTEMBER 23: Terry McLaurin #17 of the Washington Redskins is introduced prior to the game against the Chicago Bears at FedExField on September 23, 2019 in Landover, Maryland. (Photo by Will Newton/Getty Images)

His numbers are all the more impressive when considering Washington’s 2,812 passing yards ranked 32nd in 2019. McLaurin’s 93 targets and 58 receptions were 19% and 19.5% of the Redskins’ team’s totals respectively. Terry is a true WR1 – he accounted for 32.7% of Washington’s total passing yards and he accomplished this in only 14 games. The 32.7% of his teams total ranked fifth in the NFL in 2019 and the most by any rookie since Odell Beckham Jr.

At this point in the offseason, it doesn’t appear that Washington’s offense is going to be a whole lot more productive heading into 2020. The addition of Ron Rivera and Scott Turner brings with them structure and optimism.

McLaurin looks like a truly special talent. I am betting on talent. Talent produces targets and targets provide opportunity. I expect Dwayne Haskins to improve in 2020 and beyond and that is especially good news for the soon to be second-year wide receiver.

OAKLAND, CALIFORNIA – DECEMBER 08: A.J. Brown #11 of the Tennessee Titans celebrates after he scored a touchdown against the Oakland Raiders during the first half of an NFL football game at RingCentral Coliseum on December 08, 2019 in Oakland, California. (Photo by Thearon W. Henderson/Getty Images)

When I researched A.J. Brown’s 2019 rookie season, the following statistics simply could not be ignored.

Terry McLaurin impressed me in 2019, but Brown, who is two years younger, is the man I want to own going forward.

In addition to the PFF grade, Brown stood out in almost every other metric statistically significant for wide receivers in fantasy. He didn’t just stand out; he recorded a historically great number, led the league, or almost led the league.

As noted A.J. Brown was my 6th ranked rookie WR entering 2019. Remember when we were all downgrading Brown due to his Tennessee landing spot? Well, that impacted me as well. Lesson learned. Since the transition to quarterback Ryan Tannehill, and establishing himself as the WR1 in Tennessee, the landing spot doesn’t look that bad.

Buy/Sell: JuJu Smith-Schuster finishes outside of the top 15