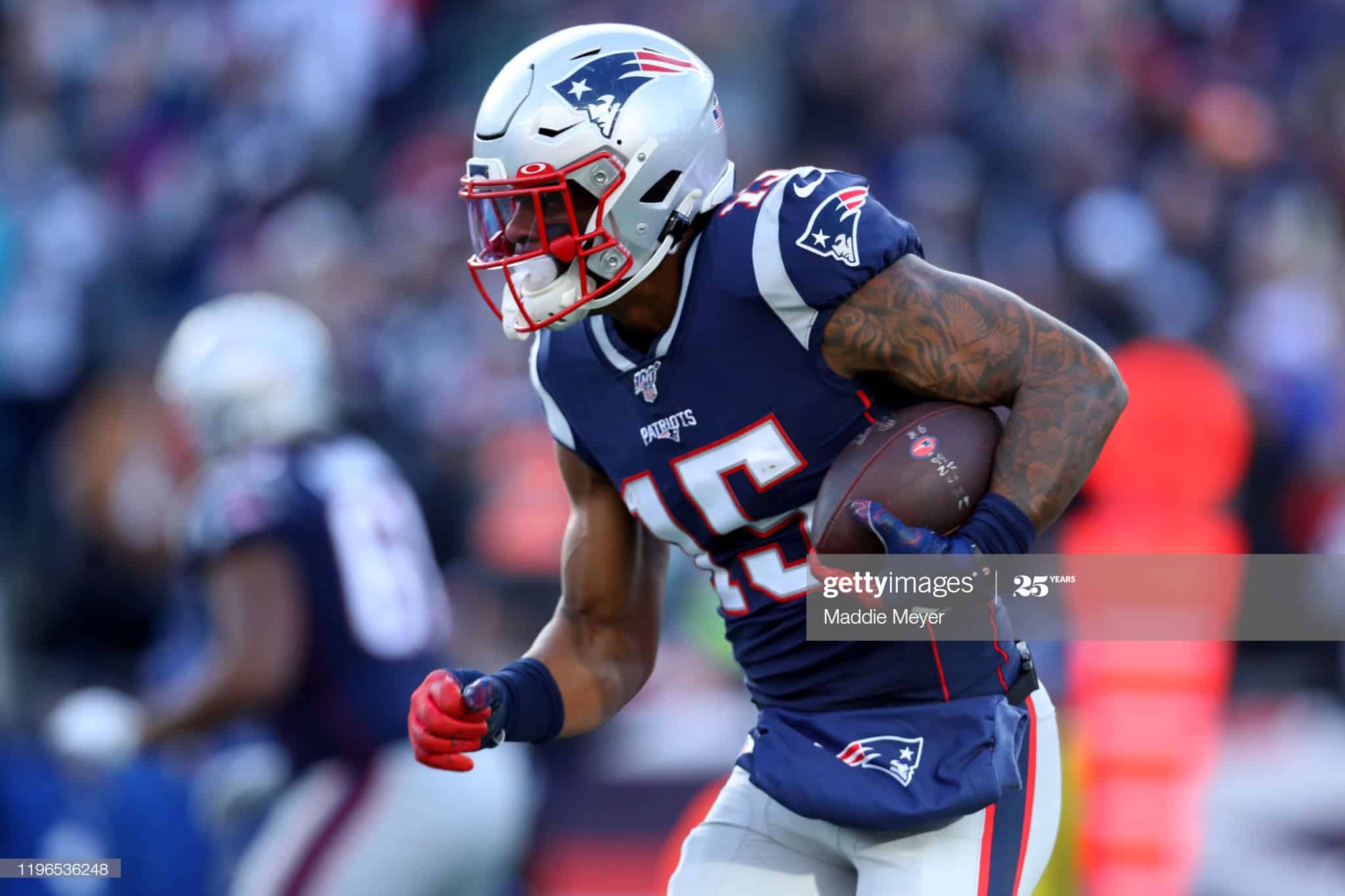 N’Keal Harry was selected by the New England Patriots in the first round of the 2019 NFL Draft with the 32nd overall pick. In three seasons at Arizona State University, Harry appeared in 37 games, totaling 213 receptions, 2889 yards and 22 touchdowns.

When the Patriots selected Harry, they felt that he brought huge potential to a position which needed help. in 2018 the 33 year-old Julian Edelman carried a major load, with Rob Gronkowski and Josh Gordon helping out as the other top pass-catching options. Gronkowski retired and at the time of the 2019 draft, and Josh Gordon’s future was uncertain as he awaited league reinstatement. The Patriots needed to think about bringing in pass-catching threats for the future, and Harry appeared to be just that.

In the preseason, Harry dealt with numerous injuries and appeared in only one game. He was targeted twice catching them both for 36 yards. He was outplayed by fellow rookie UDFA WR Jakobi Meyers who was the feature of the Patriots preseason attack. Myers played in all four games and totaled 20 reception on 28 targets for 253 and 2 touchdowns.

Prior to start of the season the Patriots placed Harry on injured reserve with an ankle injury. It seemed like Harry’s time was over before it started. During his time on IR, the Patriots’ receivers room got a little more crowded. They signed Demaryius Thomas, got Gordon back from suspension and signed Antonio Brown.

The Patriots would go on to cut Antonio Brown, Thomas, and Gordon. When Harry was activated the depth chart remained short on experience behind Julian Edelman and Mohamed Sanu. Harry wasn’t able to make much of an impact, totaling 12 receptions for 105 yards and two touchdowns on the year in his 7 games.

Entering 2020, there are some positives to pull from his limited 2019 season. For starters, Harry saw the field on 40% of the team’s snaps over the final four weeks, third on the team behind Edelman and Sanu. He also has a solid 4.3% drop rate and remains a natural athlete with impressive ability after the catch. He is young for the rookie class and was a prospect who needed to clean up some technical issues with his route running and hands. He was also drafted to a franchise that historically does not run rookies out onto the field and saw targets from Brady in a year where the veteran signal-caller looked like a shell of his former self.

On the flip side, the Patriots appear to be entering the 2020 season with either Jarrett Stidham or Brian Hoyer at quarterback. Say what you will about Brady’s 2019 performance, but its almost certain to be better than what we should expect out of either of the two current Patriots QB’s.

Only 3 of the 75 receivers scored 20 or fewer points in their rookie season. Vincent Jackson, Wes Welker and Victor Cruz. They all went on to have multiple top 20 seasons since 2011. Cruz and Jackson similar to Harry suffered through injury plagued rookie seasons.

Of the 21% (16) of rookies who failed to achieve at least 50 PPR points in their rookie season, only 3 of them failed to do so without sustaining an injury. Of the 46 wide receiver that have achieved multiple top 20 seasons, 7 of them finished with 50 or fewer points in their rookie season without suffering an injury. So basically 15% of the 46 had bad rookie seasons and still went on to have multiple top 20 seasons.

Harry’s 2019 was disappointing he finished with only 32.6 PPR points. The ceiling for Harry however remains high. He is in a well-run organization with only Sanu ahead of him for boundary snaps. N’Keal Harry also has draft capital going for him. The Patriots made a significant investment in this player and if he is on your dynasty roster you likely did as well. Harry will be a top target in this offense and should be able to deliver a season closer to what you anticipated in 2019. It’s not time to give up on him yet.

Clearly we need to see what type of season Harry delivers in 2020 to really have enough of a sample size to project his future seasons. The reality is, it is quite possible that Harry doesn’t develop into a viable starter on your dynasty roster. The data however since 2011 doesn’t support that, and shows the odds are in his favor of him turning it around.

When a rookie WR is unproductive in their rookie season it would seem to indicate a buying opportunity. N’Keal Harry is a prime example. He was the top rated asset in rookie drafts last season but he was slowed by injury and underwhelmed once he found the field.

In 2019 Harry was the top ranked WR in the draft class both before and after the NFL draft. His current start up ADP has him at WR39 behind fellow 2019 draft classmates Marquise Brown, D.K. Metcalf, Deebo Samuel and Terry McLaurin all of whom he was ranked ahead of this time last season.

I have Harry ranked as my WR51. I do believe that Harry bounces back and has a better season in 2020 and likely continues to developin the years to come. I would however sell if you can get WR39 value in return.