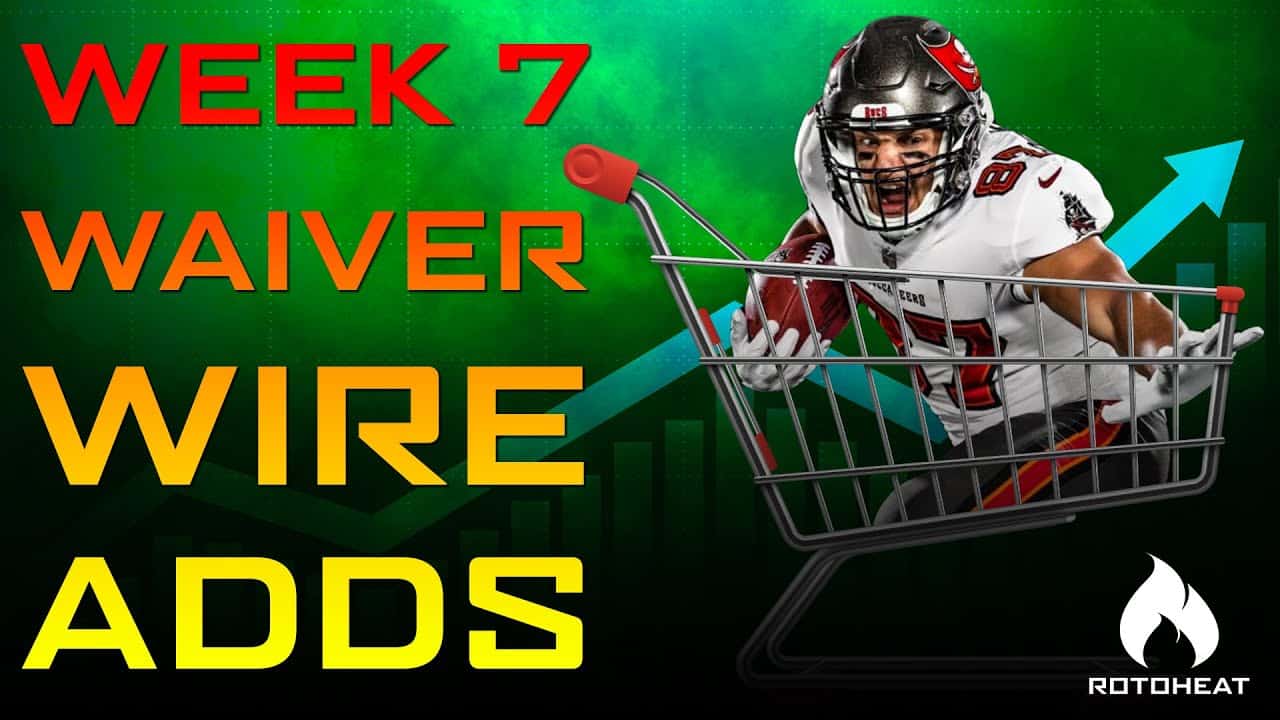 In Week 7 Baltimore, Indianapolis, Miami, and Minnesota are off. his week Brad Menendez and Rob Sullivan discuss the upcoming week and which players we like for your NFL Week 7 Waiver Wire Pickups.

Ryan Fitzpatrick has no plans on giving up his starting gig in Miami. Fitzmagic entered the week as the QB6 averaging 21.77 fantasy points per game. He finished 18/27 for 191 yards and 3 touchdowns. It will be yet another top 10 finish for the beard. Each week we suggest you add Ryan Fitzpatrick and this week he solidified that he is a must own QB in all formats.

Justin Herbert is a QB that we have been talking about for weeks now. There is a possibility that Herbert was dropped in your leagues entering his bye this week. Herbert has a great schedule coming up; Jacksonville, Denver, Vegas, Miami, and The New York Jets in his next 5. If he is available and you need a QB he is an easy add.

Similar to Justin Herbert, Derek Carr is also coming back from his bye week. Carr has played well this season and entering his bye week Carr was sitting at QB13 averaging just under 20 fantasy points a game. Carr and the Raiders face the Buccanners and Browns the next two weeks. We prefer Herbert, but Carr is a serviceable plan B.

BALTIMORE, MARYLAND – OCTOBER 11: J.K. Dobbins #27 of the Baltimore Ravens runs with the ball during the first half against the Cincinnati Bengals at M&T Bank Stadium on October 11, 2020 in Baltimore, Maryland. (Photo by Todd Olszewski/Getty Images) NFL Week 7 Waiver Wire Pickups

Baltimore has been a three headed monster of a backfield all season long effecting the fantasy value of the three heads. Mark Ingram left this weeks win over the Philadelphia Eagles, opening the door for both J.K. Dobbins and Gus Edwards. Edwards led the Ravens in carries, and Dobbins in yards. Neither one overly impressive. With the Ravens heading into their bye week, the Ingram injury may end up being a moot point. If you have the roster spot you may want to take a shot at beating the Week 8 waiver wire.

The Chargers were on bye in Week 6, they will enter Week 7 with a split backfield. In their Week 5 overtime loss to the New Orleans Saints, Jackson was the RB of choice for Anthony Lynn and the Chargers. With the beauty of a schedule they have coming up, both backs look have a role, and both need to be owned.

Travis Fulgham caught 6-of-10 targets for 75 yards and a touchdown in the Eagles’ Week 6 loss to the Ravens. He nearly hauled in a Hail Mary pass from Carson Wentz at the end of the first half, that would have made his day even better. Wentz again showed his trust in Fulgham as his 10 targets tied for the team lead. He now has 16 catches for 227 yards and two scores over the past two weeks. Those who picked up Fulgham on the waiver wire this week might have a plug-and-play option for the rest of the season. Those who didn’t need to this week.

Tim Patrick caught 4-of-6 targets for 101 yards in Week 6 against the Patriots. This marks back-to-back games over 100 yards for Patrick, who had a 6/113/1 line before Denver’s Week 5 bye. Patrick has benefitted from K.J. Hamler and Noah Fant missing time, as well as Courtland Sutton. That could change next week, with both potentially returning. Regardless Patrick is a viable option in this offense. The Broncos have a matchup with the Chiefs in Week 7, so look for them to be throwing often.

Keelan Cole caught 6-of-9 targets for 143 yards in the Jaguars’ Week 6 loss to the Lions. Cole’s outburst came even as D.J. Chark somewhat surprisingly played and drew 14 targets. The 143 yards were the second most of Cole’s career. Cole doesn’t seem to be going anywhere. He’s a WR4, going forward and a WR that you can use in your flex. The Chargers are a tough Week 7 matchup, but I am picking up Cole nonetheless.

Rob Gronkowski caught 5-of-8 targets for 78 yards and one score in Tampa Bay’s Week 6 win over the Packers. This is the closest we have seen to 2017 Gronk. He looks to be getting his legs under him and he is a TE that needs to be more widely owned. If he is available in your league pick him up.

Logan Thomas caught 3-of-4 targets for 42 yards and a touchdown in Washington’s Week 6 loss to the Giants. Thomas caught his first touchdown since Week 1. He has seen at least four targets in every game with the Washington Football Team. However, he has topped out at four targets in each of the past three weeks. Despite finding the end zone, Thomas only recorded a 9.5% target share. His lack of targets in recent weeks combined with Washington’s struggling offense makes him a TE2 moving forward, but his upside with an improved quarterback is worth a look as a bye week fill in.

Rick Butts mentioned you beat the wire and grab Dallas Goedert last week. Judging my his ownership y’all didn’t listen. Zach Ertz left this one with an injury and Goedert is close to coming off of IR. He’s a Carson Wentz favorite especially in the red zone and this might be your last chance to grab him.