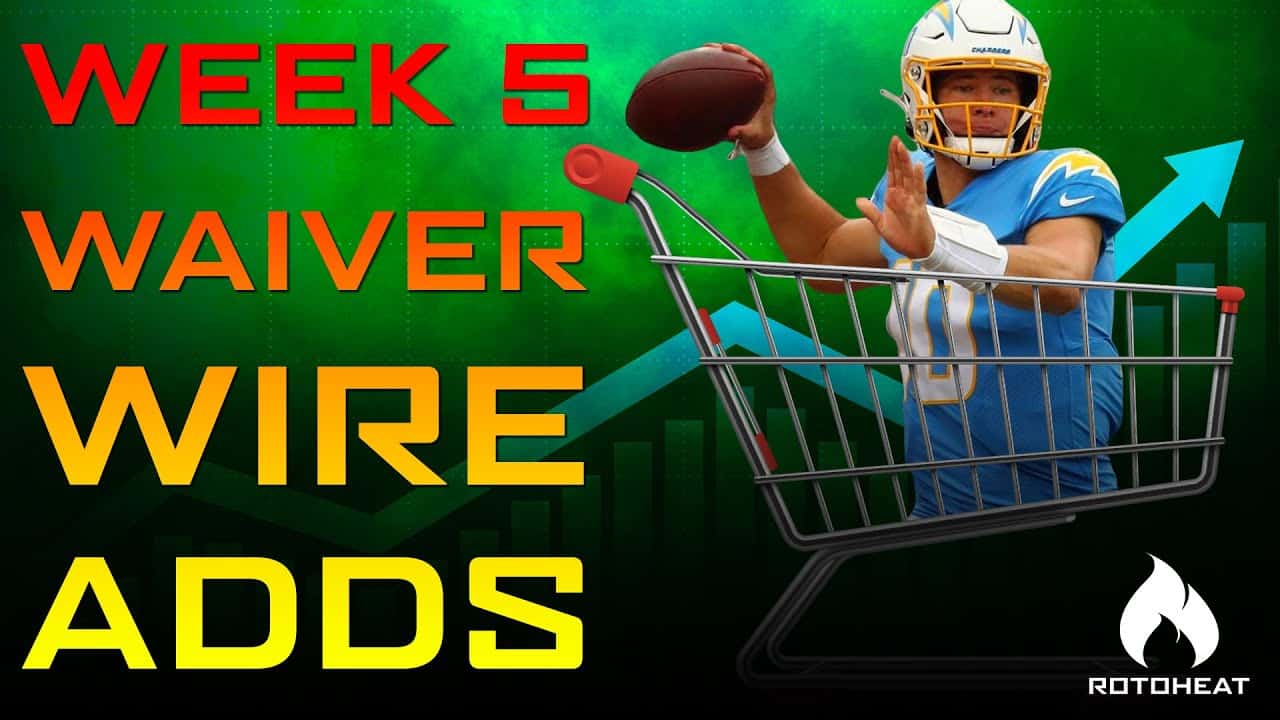 Each and every week in Fantasy Football there are surprise performances and there are injures. Both of these occurrences, tend to lead to opportunity and opportunity leads to touches. Touches lead to fantasy points. Every week there is something to pay attention to in the NFL. At times it is injuries, others it’s bye weeks, and in Week 4 it was Covid-19.

Week 5 kicks off the seasons’ bye weeks, with the Green Bay Packers and Detroit Lions get the week off. This week Brad Menendez and Rob Sullivan bring you waiver wire add for NFL Week 5 Waiver Wire Pickups.

OAKLAND, CALIFORNIA – DECEMBER 08: Quarterback Ryan Tannehill #17 of the Tennessee Titans looks to pass the ball in the second half against the Oakland Raiders at RingCentral Coliseum on December 08, 2019 in Oakland, California. (Photo by Lachlan Cunningham/Getty Images) NFL Week 5 Waiver Wire Pickups

Ryan Tannehill ended up with an unplanned bye week in Week 4. The Covid-19 outbreak within the Titans organization led to the postponement of the scheduled Pittsburgh Steelers in Tennessee this weekend. Thru three weeks, Tannehill was sitting at QB12 averaging a healthy 19.95 fantasy points a game. Likely dropped by QB needy teams entering Week 4, is now widely available in the vast majority of leagues and his bye week is in the rear view mirror. He has a tough matchup in Week 5 versus Buffalo, but remains a QB worth the add.

Gardner Minshew completed 27-of-40 passes for 351 yards with two touchdowns and an interception in Jacksonville’s Week 4 loss to the Bengals. Minshew bounced back after a disappointing Week 3, though most of his yards came while playing from behind in the fourth quarter. Both of Minshew’s touchdowns went to D.J. Chark, who he targeted a team-high nine times. Minshew has benefitted from a favorable early season schedule, with matchups against the Bengals, Dolphins, and Colts. He’s on pace for 4,522 yards and a 32:16 TD/INT ratio through the first four games. You could do a lot worse off your waiver wire.

Justin Herbert completed 20-of-25 passes for 290 yards, 3 touchdowns, and 1 interception in the Chargers’ Week 4 loss to the Bucs. The Chargers offensive entered the game down Mike Williams, and then lost Austin Ekeler. Despite being shorthanded, Herbert was impressive. He nearly became the second QB ever to have 300+ passing yards in his first three games (Joe Burrow being the first), and Hebert’s three touchdowns all went to undrafted players. In theory, coach Anthony Lynn could go back to Tyrod Taylor at any point, but that would be one of the dumbest things imaginable. Herbert has passed the eye test and more in his starts. He’ll be an upside QB2 on Monday night in New Orleans.

We have been telling you to add Joshua Kelley every week this week, and we are speaking louder than ever due to the injury to Chargers starting RB Austin Ekeler. Kelly only had 12 touches in this one against the Buccaneers for 33 total yards. Things will be a little easier for Kelley in Week 5 against the New Orleans Saints defense that is missing several key components.

We haven’t seen Phillip Lindsay since he put up 4.5 PPR points in an injury shortened Week 1. Lindsay was close to coming back in Week 4 and should be good to go in Week 5 versus the New England Patriots. Broncos RB Melvin Gordan has looked anything but reliable season to date. The match-up vs. New England isn’t great but expect Lindsay to split carries with Gordon for the foreseeable future.

D’Ernest Johnson got into the Browns win over the Dallas Cowboys after the injury to RB Nick Chubb. Johnson averaged 7.3 YPC on 13 carries. His 95 yards led the Browns. Johnson was second in the AAF in rushing with 372 yards at the time of its collapse. He also led the league in yards-per-carry with a 5.8 mark, totaling a 64-372-2 rushing line. Johnson flashed in the passing game as well, compiling a 22-220-1 line there. If Chubb misses time there will some opportunities for Johnson in this run heavy offense.

Broncos WR Tim Patrick caught 6-of-7 targets for 113 yards and a touchdown in the Broncos’ Week 4 win over the Jets.
With K.J. Hamler and Noah Fant knocked out with injury, Patrick answered the bell opposite Jerry Jeudy, leading the Broncos in every receiving category. His score was a seven-yard bullet from Brett Rypien in the end zone. Patrick surfaces when given the opportunity. With Courtland Sutton lost for the season, Hamler and Fant banged up, Tim Patrick is a must add WR NFL Week 5 Waiver Wire Pickups.

Russell Gage is questionable for the Falcons game tomorrow night versus the Green Bay Packers. He needs to be owned in all leagues as after three weeks he is the WR24 with 41.60 PPR points. Atlanta is trailing basically all the time and throwing even when leading. Gage has seen 24 targets thru three games and that is with him leaving early in Week 3 with a head injury.

Tee Higgins caught 4-of-7 targets for 77 yards in Week 4 against the Jaguars. Higgins stayed involved coming off a breakout two-score game in Week 3. He saw more targets than A.J. Green, though Green missed time in the second half with an injury. The Bengals think highly enough of Higgins that they made John Ross a healthy scratch the last two weeks. Higgins is starting to emerge as the Bengals’ top red-zone threat with C.J. Uzomah out for the year.

Austin Hooper caught 5-of-7 targets for 34 yards and a touchdown in Cleveland’s wild Week 4 win over Dallas. Kareem Hunt was stuffed on the one-yard line in the second quarter, allowing Hooper to corral his first touchdown of the year following a play-action pass from Baker Mayfield. Hooper’s seven targets qualified as a season-high mark, and perhaps an indication that he will be more involved in the Browns’ offense.

Mo Alie-Cox had a quiet day in a game in which his QB Phillip Rivers only attempted 29 passes. Alie-Cox caught one of his two targets for 13 yards. The good news the catch went for a touchdown. There will be better days for Alie-Cox as he appears to have established him as the TE of choice for Rivers. Game script dictated this one as the Colts ended up running 38 times versus 29 passes. Mo Alie-Cox should be owned in more than 32% of leagues.

After being a large waiver wire add entering Week 3, and a disappointing Week 4, Drew Sample is back on the TE fantasy radar. That may have more to say about the TE as a whole than anything else. Sample finished Week 4 with 3 catches for 47 yards on 5 targets. Sample with CJ Uzomah out for the season is a decent weekly steamer that should be owned in more than 3% of leagues.