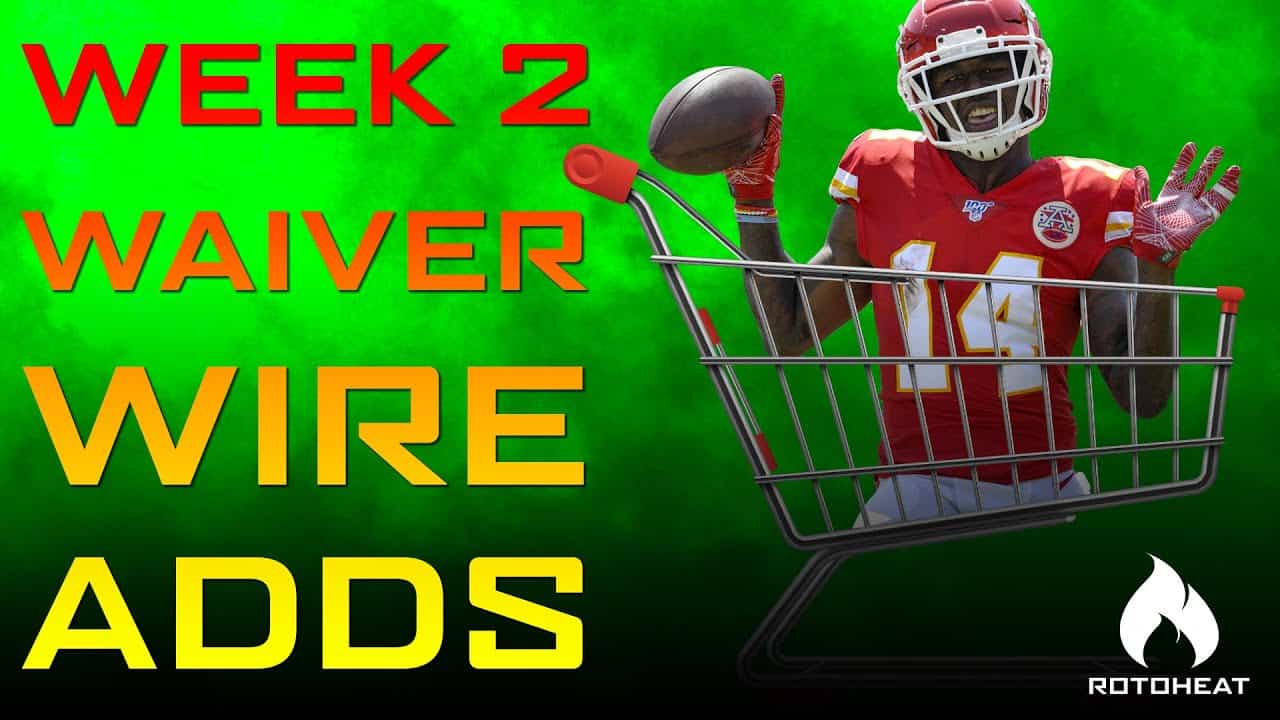 CHARLOTTE, NORTH CAROLINA – SEPTEMBER 08: Malcolm Brown #34 of the Los Angeles Rams scores a touchdown against the Carolina Panthers during the third quarter of their game at Bank of America Stadium on September 08, 2019 in Charlotte, North Carolina. (Photo by Grant Halverson/Getty Images) NFL Week 2 Waiver Wire Pickups

The Fantasy community it would appear overlooked Malcolm Brown instead focusing on Cam Akers. I was expected that Brown would get the first shot at the role, and Brown did very well with rushing for 79 yards on 18 carries and adding three catches for 31 yards. He also scored twice. It was a great game from Brown, who figures to remain the primary option moving forward, and is a must add.

Sammy Watkins likes his week one’s and it appears QB Patrick Mahomes likes Sammy Watkins. Watkins’ 2020 Week 1 wasn’t quite as explosive as his 46.8 explosion to open 2019, but Sammy’s 21.5 PPR points are good enough for WR8 heading into Monday night. Watkins led the Chiefs with 9 targets, hauled in 7 of them for 82 yards and a touchdown. An offense led by Andy Reid and Patrick Mahomes, is a an offense you want pieces of. Sammy Watkins enters week 2 as a must own WR.

Parris Campbell turned 9 Philip Rivers targets into 7 catches for 71 yards and he added a nine yard run as well. Campbell led the Colts in targets and yardage. He is a must own entering week 2 and a home date against the leaky Minnesota Vikings defense.

CINCINNATI, OHIO – SEPTEMBER 13: Joshua Kelley #27 of the Los Angeles Chargers runs with the ball against the Cincinnati Bengals during the game at Paul Brown Stadium on September 13, 2020 in Cincinnati, Ohio. (Photo by Andy Lyons/Getty Images) NFL Week 2 Waiver Wire Pickups

Joshua Kelly established himself as the number 2 running back for the Chargers. Kelley had 12 carries for 60 yards with a touchdown. Kelley surpassed Justin Jackson on the depth chart is a solid add to your fantasy team.

Russell Gage after Mohammed Sanu was traded a year ago Gage finished the season with 38 catches 344 yards and a TD. Gage was WR120 before the trade and WR49 after it. He picked up right where he left off last season and went over 100 receiving yards on a career high 12 targets. In an offense that throws this much being the WR3 is worthy of an add.

The debate as to who the #2 WR is Green Bay is continues. It’s so close we have just lumped these two WRs together. Lazard is likely the priority, but both showed well on Sunday. Valdes-Scantling out-targeted Lazard, but Lazard played 26 more snaps. Aaron Rodgers took numerous shots downfield in this one, and a more aggressive Rodgers would be good news for both. The Packers took advantage of a young and inexperienced secondary.

I don’t see Green Bay being this pass heavy week to week. Until we get a clearer picture of how the passing game and the WR usage unfolds in Green Bay, be reasonable with your FABB money. These two are likely not every week starters for you so don’t be too aggressive.

I have been writing all offseason that Philip Rivers loves throwing to his running backs. Rivers targeted his backs 17 times on Sunday and Hines was the leader with 8 of them. Marlon Mack is feared to be lost for the season, which elevates the need to roster Hines and he is a good add entering week 2.

Remember this guy? With all the offseason hype surrounding the addition of Tom Brady in Tampa Bay, the fantasy community migrated to Rob Gronkowski as the TE to own in Tampa Bay. He very well may be but in Week 1, Brady preferred Howard. Brady targeted Howard 6 times which turned into 4 catches, 36 yards and a touchdown. Heading into Week 2 and a match-up with Carolina, O.J. Howard is a good add.

Gardner Minshew completed 19 of his 20 attempts for 173 yards and three touchdowns, (20.82 Fantasy Points) in the Jaguars surprising win over the visiting Indianapolis Colts in Week one. Minshew and the Jags head to Tennessee to face the Titans in week 2. The Jaguars are likely to be trailing in this one forcing Minshew to throw giving him some upside and making him a streaming option in Week 2.

Kirk Cousins put up 22.76 Fantasy Points in the Vikings Week one loss to the Green Bay Packers. The Vikings defense appears to be a shell of it’s former self, which potentially is a good thing fantasy wise for Cousins. The Vikings face the Colts in Week two on the road in Indianapolis. If you are stuck for a QB in Week 2, you could do worse than Kirk Cousins.

The 44 points allowed by Minnesota in Week 1 were the most allowed since Mike Zimmer became their Head Coach. The Vikings cornerbacks are young and a veteran like Philip Rivers could pick them apart. Rivers completed 36 of 46 passes for 363 yards, with a touchdown and two interceptions (16.82 points). Rivers brings 300+ yard upside and also has the potential for several interceptions. Rivers should be better against Minnesota in Week 2, and is a streaming option for you. I would prefer both Minshew and Cousins however.

Mitchell Trubisky enters Monday as the QB8. He had an up and down day on Sunday vs Detroit and prior to Sunday Night Football, but three 4th quarter touchdown passes lands him on this list. Trubisky would be the last of the suggested quarterback streaming options in Week 2. A match-up versus the Giants is a good one.