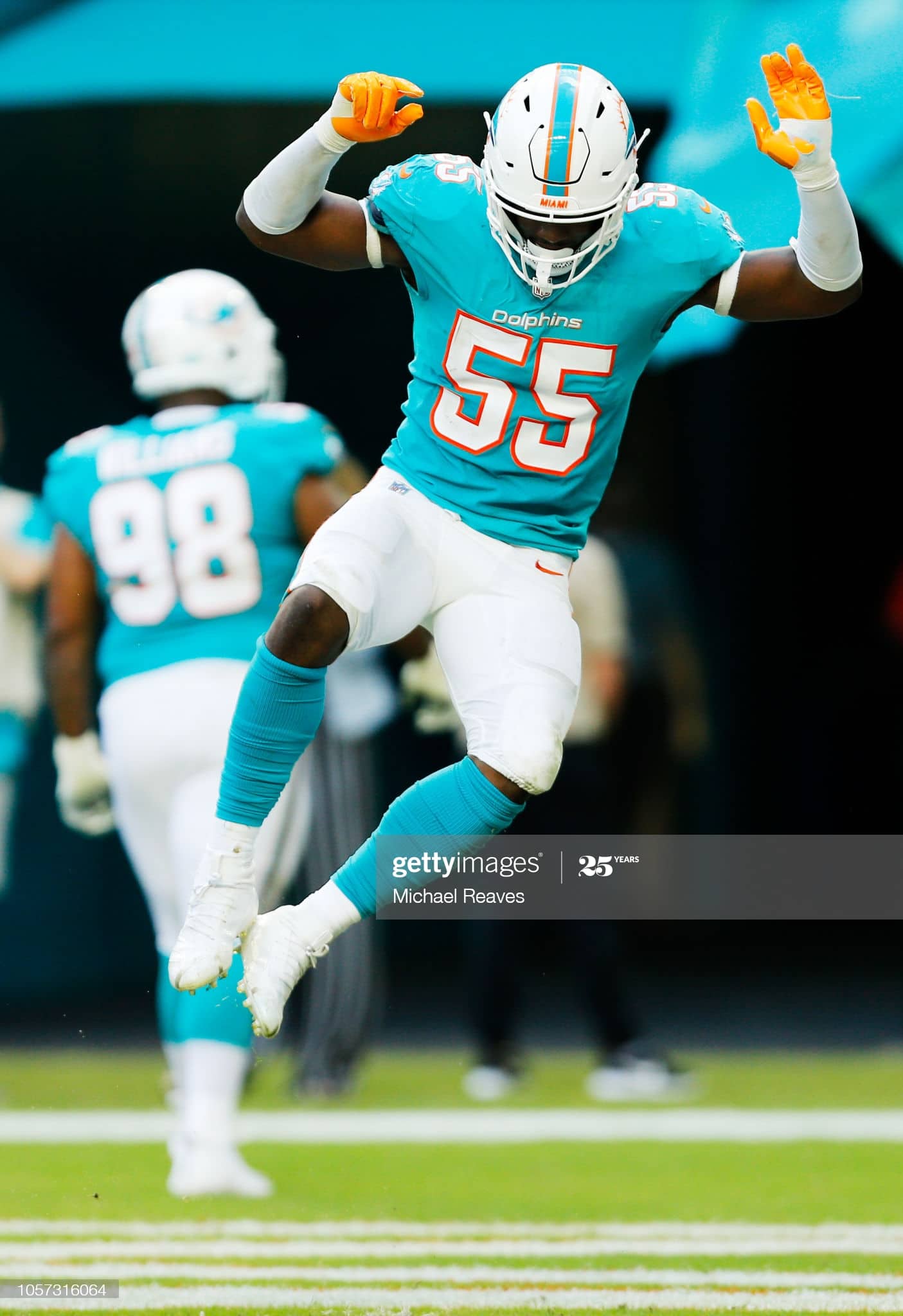 Each week in fantasy football there are surprise performances and there are injures. When looking at these, along with evolving team situations, we can find players it would make sense to add to your roster if you have room to wait and see (as we know these are often fluid situations), or are looking for a positional boost.

PHILADELPHIA, PENNSYLVANIA – DECEMBER 09: Tight end Kaden Smith #82 of the New York Giants fumbles the ball on a hit by linebacker Nate Gerry #47 of the Philadelphia Eagles in the first quarter of the game at Lincoln Financial Field on December 09, 2019 in Philadelphia, Pennsylvania. (Photo by Emilee Chinn/Getty Images)

13 solos, 3 assists, 1 TFL and 1 sack. 95% snap count, with the next highest linebacker, Kyle Van Noy, at 64%. Baker is probably the highest owned player on our lists this week, but if he is available, go get him. They play the Bills next week, and the Bills gave up decent stat lines to the rag tag Jets linebackers (cumulatively) in week 1.

The IDP world had a lot of talk about who the main linebacker for the Eagles would be, and after Week 1 it looks to be Gerry. With a 5 solo, 5 assist, 2 TFL day, on 99% of snaps (Duke Riley was the next closest linebacker on the team with 81%), Gerry is one of the top adds, and gets the Rams in Week 2. He could be in line for a big day if the Rams continue their Week 1 approach of lots of running and short throws close to the line of scrimmage.

6 solos, one assist and 2 PD, with 100% snap share as the man in the middle. Similar to the Eagles, there was a lot of talk about who the next linebacker up for the Rams would be, and it appears to be Kiser. This isn’t an amazing stat line by any means, but it provides a solid floor for a guy playing behind Aaron Donald, and going against a team that threw a lot in Week 1 (Dallas had 39 passes attempts to 27 rushes).

An old IDP name in a new place, Bostic took over, for this week anyway, as the main guy for Washington, in a seemingly thrown together at the last minute linebacker corps, with Reuben Foster and Thomas Davis on IR. Cole Holcomb was relegated to special teams only, and Bostic played 100% of the snaps. Kevin Pierre-Louis played 99% and had 3 solos and an assist, but Bostic ended with 5 solos, 3 assists, a sack and a TFL. This will be one to watch, but if you can grab and stash Bostic for cheap, it is worth it after Week 1.

BALTIMORE, MARYLAND – JANUARY 06: Adrian Phillips #31 of the Los Angeles Chargers celebrates after intercepting a pass by Lamar Jackson #8 of the Baltimore Ravens during the second quarter in the AFC Wild Card Playoff game at M&T Bank Stadium on January 06, 2019 in Baltimore, Maryland. (Photo by Rob Carr/Getty Images)

97% snap share led the safeties for the Jaguars, and he produced. Taking over for the traded Ronnie Harrison, he ended with 6 solos and assists. The linebackers as a whole played well for the Jaguars, and there may not be , but if you are looking for cheap safety depth with a safe floor, Jones is a nice addition.

Phillips only played in 69% of the defensive snaps, but had a line of 8 solos, 1 assist, 1 TFL, 1 PD and 1 INT. The INT won’t happen every week of course, but those stats on less than 70% snaps, and being used all over the field in Week 1 is promising. As we discussed on our IDP show, Phillips is the kind of player Bill Belichick likes, so I expect his usage to trend upward as well.

Seemingly channeling the traded Jamal Adams, Maye played 100% of the snaps and had 7 solos, 3 assists, 2 TFL, 2 PD and a forced fumble. The Jets defensive line played better than expected, and with the linebacking corps in shambles, Maye looks to have a huge opportunity this year to put up numbers in a contract year.

He had 100% snap share, he started across from Richard Sherman and produced 11 solo tackles and 4 assists. This is what you want to target in a cornerback. I wouldn’t throw a bunch of FAAB at him, but considering you can probably get him for free, he’s a great add this week, especially with the Jets likely having to throw a lot to keep up with the 49ers in Week 2.

OAKLAND, CA – SEPTEMBER 20: Aldon Smith #99 of the Oakland Raiders stands on the field before their game against the Baltimore Ravens at O.co Coliseum on September 20, 2015 in Oakland, California. (Photo by Ezra Shaw/Getty Images)

6 solos, 5 assists, 1 TFL and 1 sack. For one week anyway, Aldon Smith looked like he did with the 49ers. There was a lot of buzz about how good he looked from the Cowboys during camp, but with the pile of salt you have to take with camp comments, and having not played since 2015, I was skeptical. I would not expect this line from him every week, but we know the natural talent is there, he has a nice defense around him, the coaching staff likes him, he had 74% of the defensive snaps and he produced. Go get him where you can.

4 solos, 2 assists and 1 TFL on 68% snaps, tied for the most on the defensive line for the Patriots Week 1. Up next is a Seattle offensive line that gave up a lot of pressure to the Falcons in Week 1.

Lawson had a nice day (4 solos, 1 assist, 1 TFL and 1 sack) operating as the third defensive end, getting a 58% snap share behind Carlos Dunlap (70%) and Sam Hubbard (78%). Lawson has always had the talent, but has been hampered by injuries a lot. You don’t want him as more than your DL3 probably, but with a very nice defensive line around him, and facing a Browns team in Week 2 that had a lot of issues in Week 1, he is a nice speculative add, especially if Dunlap or Hubbard were to miss time.

5 solos, 1 assist, 2 TFL, 1 sack and 2 PD. Emmanuel Ogbah (86%) and Shaq Lawson (94%) at defensive end both played more than Wilkins (67%), but Wilkins was the highest snap percentage for the Dolphins interior line, and both Lawson and Ogbah had dud weeks. With both the snap percentage and production there for him, he’s our top DT add this week.

You catch NFL Week 2 IDP Waiver Wire Adds and all our other video content on YouTube. Be sure to subscribe and click the notification bell to ensure that you don’t miss any of our other great content. We have free IDP Rankings over on RotoHeat.com, and you can catch our IDP-Specific podcast on most podcatchers! You can also find me on Twitter.